The Wild Atlantic Way – all 2,500 kilometres of it – gives  yet another reason to visit Ireland. 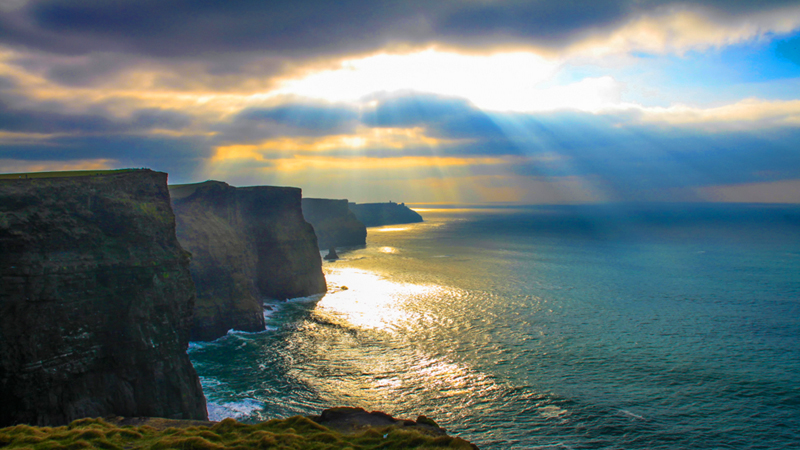 The island of Ireland, bless its little emerald green heart, is smaller in area than Tasmania, yet it boasts a coastal touring route that is longer than the drive from Sydney to Cairns. The 2500km Wild Atlantic Way, like Ireland itself, is a little bit of magic. Running from Donegal in the northwest to Cork in the south, it doesn’t just stick to the highways; rather, it dips into side roads and tiny laneways to reveal sights that once were discovered only by the most assiduous of travellers. 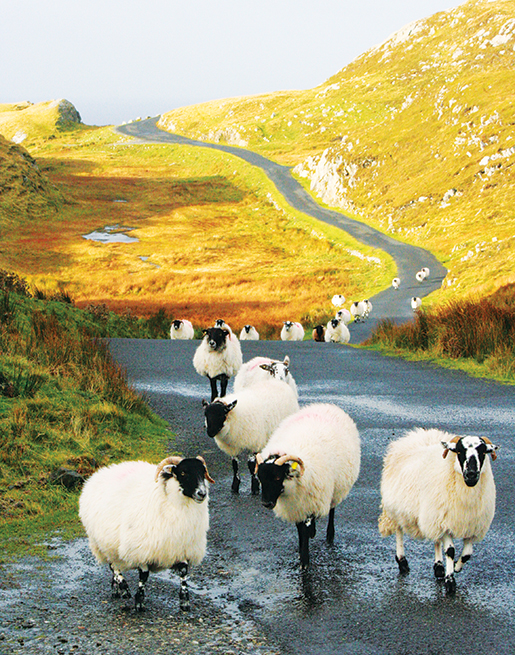 The Wild Atlantic Way concept was developed in part to help boost tourism in the northwest, which is the least visited region of Ireland by international travellers. Traditionally its tourism industry has been based on domestic visitation, much of it from Northern Ireland, so now this wild and windswept corner is playing catch up.

Slieve League is one of 15 Signature Discovery Points on the Wild Atlantic Way, which mark the best of the best sights along its path. Here, on the edge of Europe, sea cliffs tumble up to 600m straight into the Atlantic. These are not as famous as the Cliffs of Moher to the south, which is among Ireland’s most visited places and boasts a fancy interpretive centre full of high-tech gadgets and exhibits, signs in a hundred languages and a car park crammed with touring coaches.

At Slieve League (Sliabh Liag in Irish) you drive in on a narrow road that swoops and soars with the landscape past tarns and bogs and grassy hills, and you might have to stop to open a gate or pull to the side to let a car pass in the opposite direction or to avoid a posse of sheep who otherwise are dotted in a picturesque manner about the countryside.

At its end you stand braced against the ferocious winds that sweep in from Newfoundland or pick your way along steep paths through the folds of the hills, the foaming sea smashing into the cliffs far beneath you. It is an elemental place that sits perfectly in wild Donegal.

Inland you drive on roads that cut through mountain passes into deep valleys, past whitewashed cottages (and as many ruins), great mounds of cut peat, across tiny bridges and into ancient villages like Glencolmcille, where the Oideas Gael cultural centre’s residential courses teach Irish language alongside such pursuits as set dancing and flute and whistle playing – and, one suspects, how to drink Guinness in the local pubs.

Donegal and Mayo, to the south, are the heart of the Gaeltacht. When spoken, with a sort of catch in the throat, the word sounds a little like “gael talked”, which is essentially what it means. This is the Irish-speaking part of the country, where Gaelic is the main tongue and English disappears from road signs, leading to the occasional puzzlement of foreign drivers wondering, for example, whether Cathair na Mart means Westport. 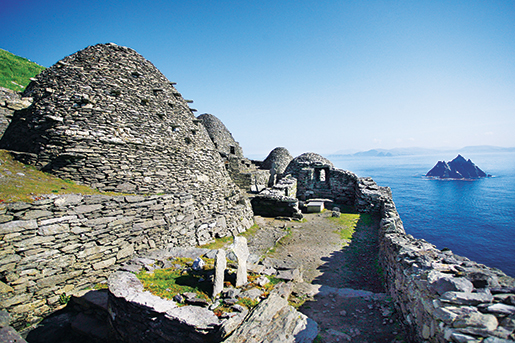 In the Gaeltacht, music and pubs go together perfectly in places such as the Reel Inn, opposite Donegal Castle in the heart of Donegal Town. Traditional music sessions have a kind of stateliness interspersed with abandon. The musicians sit around a table, drinking pints and chatting quietly, perhaps for five or 10 minutes, before a fiddler, an accordionist, a flute or whistle player begins a tune that all eventually join in playing. Then it is on for all money.

Often a singer will be featured. At the Reel Inn on this night it was a girl with a massive beehive hairdo, a sort of healthy Amy Winehouse, and she had a group of female relations of a certain age sitting in the corner who looked like extras from  Mrs Brown’s Boys, all overflowing bosoms and tight short skirts, and who nodded among themselves after each tune, “Didn’t she do well?”

Further south, in Westport, a gracious town of splendid Georgian architecture on the banks of the Carrowbeg, is Matt Molloy’s pub, owned by the flute player from the legendary Chieftains. There is music every night, and if Molloy is about he usually joins in. It’s a tiny place, and the trad sessions are held in a compact room off the main bar, packed to the gills with patrons.

Westport is the gateway to Connemara, the region that best encapsulates the sometimes-savage beauty of Ireland’s west coast and the Wild Atlantic Way. The town rises steeply from the Carrowbeg, its well-tended buildings painted in primary colours. There are fine pubs and restaurants, and it is a pleasant place in which to wander, with the Great Western Greenway walking and cycling path, which runs for 42km to Achill Island, offering a serious chance to stretch your legs.

Also beckoning is Croagh Patrick, Ireland’s holiest mountain, which rises behind Westport. The mountain – just 764m high – is believed to have been a pagan pilgrimage site as early as 3000BC. Ireland’s patron saint, St Patrick, is said to have fasted on its summit for 40 days in the fifth century, and it is now a place of pilgrimage for Catholics, especially on Reek Sunday, the last Sunday in July.

Connemara, which begins just southwest of Westport (and is marked, in typical Irish fashion, by a pub that announces itself as ‘The First Pub in Connemara’), is a region of remarkable contrasts. One minute you are driving in bright sunlight through a lush valley fed by roaring streams, the next you are cresting a bald, wind-scarred hill and gazing on a bleakly beautiful land of limestone shards and drystone walls that somehow pass for agricultural land.

The small town of Leenane, dramatically sited on Killary Harbour (Ireland’s only fjord, and another of the Wild Atlantic Way’s Signature Discovery Points), is where Connemara’s scenic options truly open up. You might arrive, if you’re lucky, when the sheep market is on, and shepherds come down from the hills to barter over their flocks. There seemed, in truth, to be more yarning than negotiating, with everyone up for a chat, but the streets were lined with trailers crammed with long-haired sheep and vendors selling everything from shears to wellington boots. 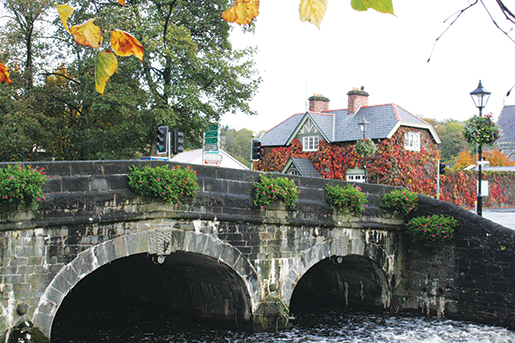 Any route from Leenane is marked on every map as a scenic drive, and you really can’t go wrong. You might head through Joyce’s Country – named not, as you might expect, for James Joyce, but because generations of Joyces have farmed here – to Maam Cross, or west past the Twelve Pins mountain range to Clifden, one of the region’s most prosperous towns and its biggest.

It is close to where aviators Alcock and Brown ended the first non-stop trans-Atlantic flight in 1919, landing somewhat unceremoniously in a bog they thought was a green field. Here, too, was where the communications pioneer Marconi built his trans-Atlantic wireless station in 1907, connecting Europe with North America.

The road south from Clifden offers Connemara at its most visceral. Tiny allotments enclosed by stone walls sit next to abandoned tumbledown cottages.  Donkeys stand hunched against the vicious gales that roar in from the Atlantic. Great swathes of broken limestone interspersed with stunted bushes rise to rocky crests scarred and shaped by wind and rain. When the rain comes – and it comes often – the landscape shines silver.

Through it all, the Wild Atlantic Way rolls on, bound for the Dingle Peninsula, the Ring of Kerry, the Beara Peninsula and the coast of Cork. The route’s neat blue-and-white signs lead the way, and you should follow.


TRAVEL FACTS
Getting There

Weather is best in summer, and the days are long, but there is much to be said for off-season travel, when you may find yourself virtually alone in some of Europe’s most blessed places.

There are endless things to do, but the best activity is to simply walk the city. Let the people from Tours 4 Tips Valparaiso guide your stroll. The knowledgeable tour leaders take you through the maze that is Valparaiso to see the golden era of the city, climb the graffiti-lined stairwells and meet local residents. The tour leaves from Plaza Sotomayor, Valparaiso’s main square every day at 10am and 3pm. tours4tips.com