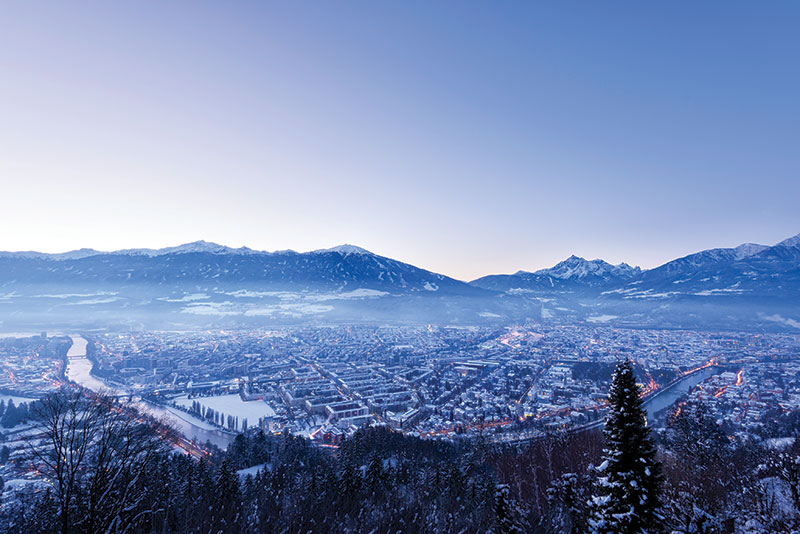 Innsbruck has so much alpine and cultural cachet that it is a bit like Austria’s much-loved chocolate cake, the Sacher torte. You just can’t get enough of it.

Innsbruck is old Europe at its best, but the university population of 30,000 students ensures that it also has a lively nightlife, vibrant café culture and appealing restaurants serving all sorts of local delicacies, from deer sausage to bacon dumplings.
Throw in some delightful cake and pastry shops, classic opera houses, designer stores, and the famous Swarovski crystals and you have a city that lives up to its billing as ‘the capital of the alps’.

For skiers and snowboarders, there’s one heck of a ride.

There are nine snow areas surround Innsbruck. Among them is Nordkette, which you can access from the city on a cable car, and Kühtai, a family-friendly ski area that has a village of igloos where you can stay. And then, of course, there’s Patscherkofel, the scene of one of Austria’s greatest Olympic triumphs.

Here are our top-eight reasons to zip up your jacket, put on your gloves and wing it to the biggest city in the Tyrol. 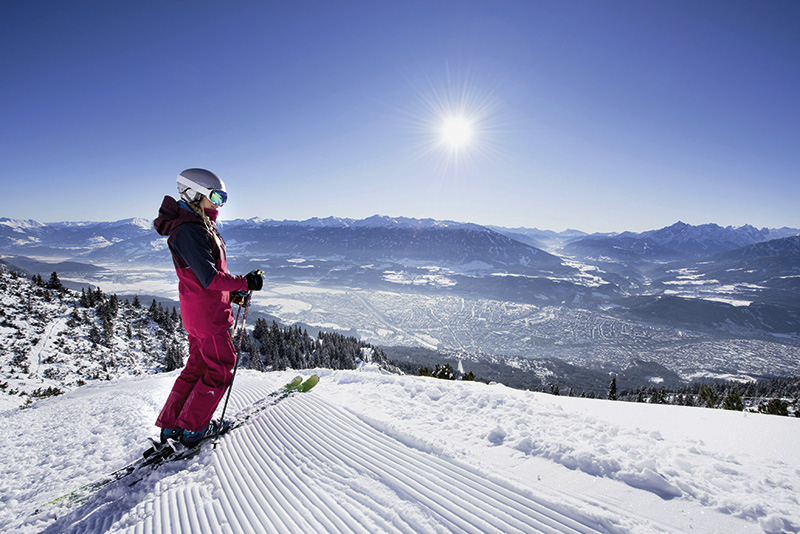 Austria, as a nation, held its breath on February 5, 1976, as the country’s ski-racing hero of the time, Franz Klammer, rocketed down the mountain at Patscherkofel to win the men’s Winter Olympic downhill race by a mere 0.33 seconds. The victory remains one of Austria’s proudest skiing moments.

Patscherkofel is among the nine ski areas surrounding Innsbruck that are collectively known as Olympic SkiWorld Innsbruck.

The Olympic pedigree of the region is as solid as Klammer’s knees, with Innsbruck not only hosting the 1976 Games, but also the 1964 Winter Olympics and the first Youth Olympics  in 2012.

All up, there are 90 lifts and cable cars and almost 300 kilometres of piste, available on a single ski pass, in the nine-resort collective.

The resorts include Axamer Lizum, Stubai Glacier and Muttereralm. All can be accessed on a free bus service.

They may lack the renown of big-name resorts such as St Anton and Kitzbuhel, but they more than make up for it with reliable snow and a variety of slopes.

If you don’t fancy the downhill run that was the scene of Klammer’s on-the-edge win, you can also find a lot of groomed and beginner terrain, pipes and freeride parks.

At Muttereralm, the Map6020 is an imposing freeride park with 3.2 kilometres of park riding and 30 jumps. It’s good for rookies, right through to experts.

Off the slopes, horse-drawn sleigh rides are among the attractions in the family friendly resort villages. 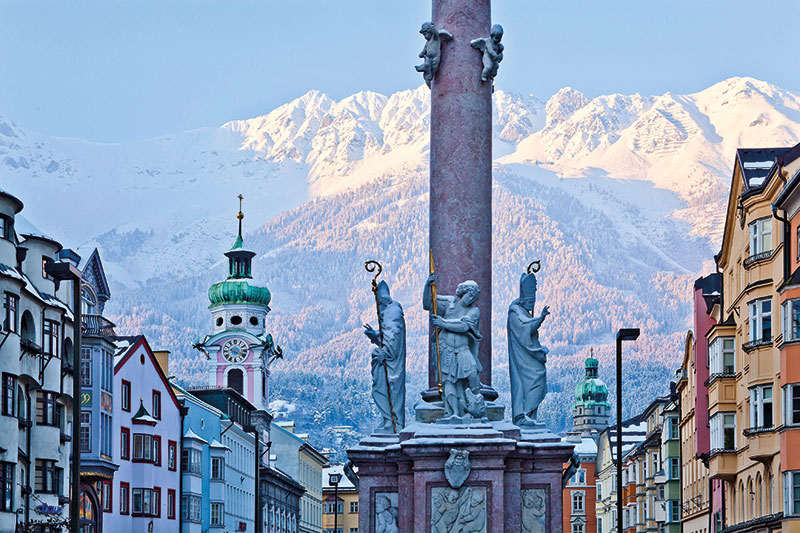 The central old town (Altstadt) of Innsbruck is the place where you find the cobble-stoned streets, medieval buildings, and skinny gothic houses with their painstakingly maintained ornamental facades painted in pastel hues.

There are walking tours of this area, which take you to museums and historic sites, such as the Golden Roof. The roof was constructed in the early 15th century and is made of 2,378 gold-plated copper tiles.

If you stay at the Hotel Weisses Kreuz you’ll be in good company, because Mozart was a guest in 1769. The hotel, built in 1465, is in the middle of Old Town and close to attractions such as the Golden Roof, the Imperial Palace, St Jacob’s Cathedral and the small boutiques and craft shops tucked into the alleyways. 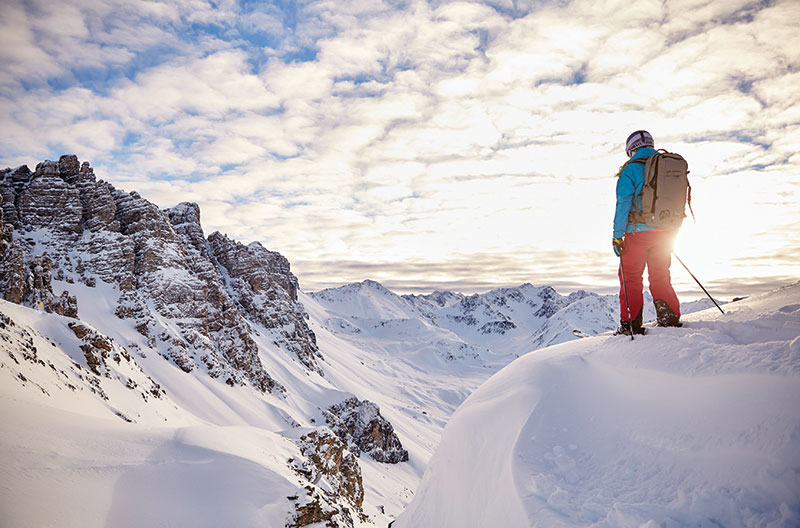 3. Bersigel ski jump
Perched above Innsbruck, this futuristic-looking ski jump stadium will get your heart racing, without even going anywhere near the steep ramp where jumpers launch into the air. Just sitting there in the tower-top café/restaurant, contemplating the ramp through the floor-to-ceiling windows, is enough to raise adrenaline levels. Settle the nerves with strudel and hot chocolate, and also take in the wonderful views over Innsbruck.

The ski jump, accessible by elevators, is the creation of highly awarded Iraqi architect, Zaha Hadid. Hadid, who died of a heart attack in March, is also responsible for Innsbruck’s Nordkette railway terminus and landmark sites around the world, including Qatar’s 2022 World Cup soccer stadium. 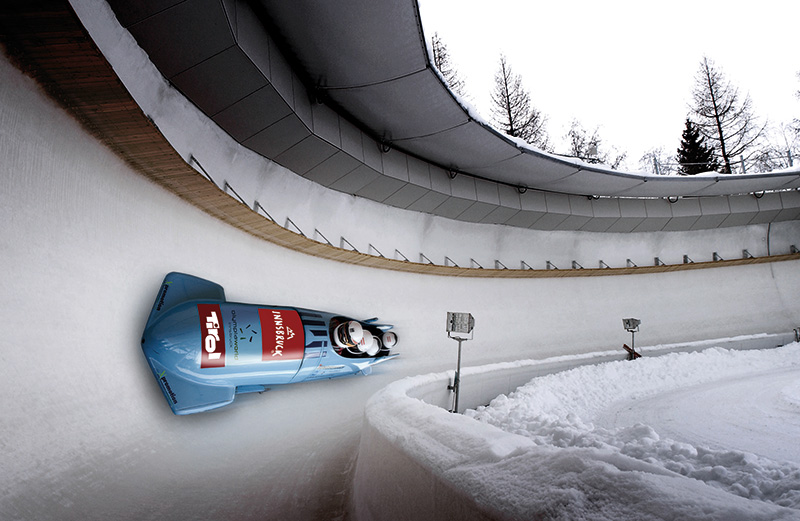 4. Olympic bobsleigh run
The village of Igls, not far out of Innsbruck, has a long tradition in bobsleigh, having hosted the world championships in 1935.

Then, in 1964, a new track was built there for the Winter Olympics. Over the years, it has been upgraded and it is considered one of the world’s best facilities for bobsleigh, luge and skeleton.

Novices can get into the action by taking a ride in a piloted bobsleigh. You can tackle 10 curves in a six-person sleigh, or get even more daring in a four-man sleigh, with a pilot and brakeman, and fly down the 1,270-metre ice track in an original racing sleigh at speeds up to 115kmh.

5. Igloo village
Tucking into a thermal sleeping bag on soft sheepskin rugs in an igloo, taking a moonlit snowshoe hike and hands-on lessons in igloo building are part of the experience at Kühtai’s Igloo Village. Guests are welcomed to the village with schnapps, and cheese fondue is one of the dinner offerings. The temperature might be -15 outside but inside is surprisingly warm. Just make sure you put your clothes away in a bag before you go to sleep or you will wake to find them as stiff as a board. Apart from staying in an igloo, Kühtai is an excellent place to stay with plenty of ski-in, ski-out accommodation at places like AlpinLodges or Jagdschloss – owned by a Count. The skiing at Kühtai is novice friendly with great deals in January. 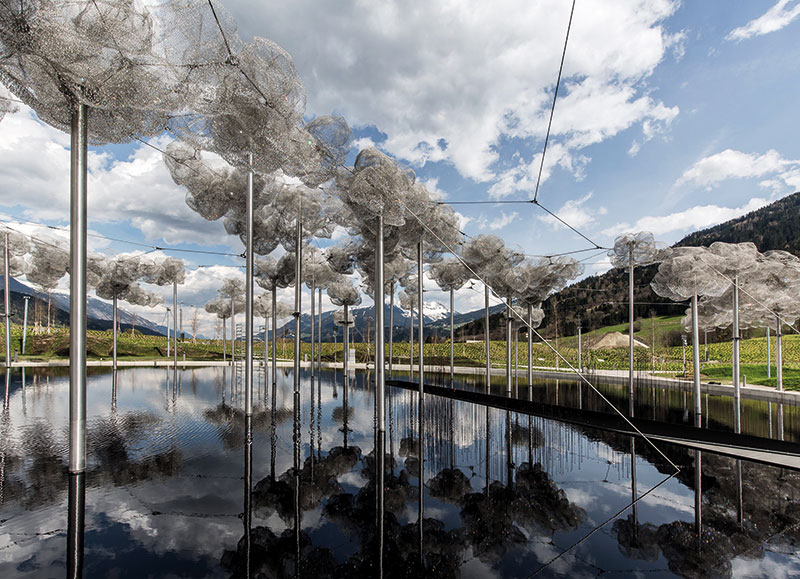 6. Swarovski Crystal Worlds
This is a dazzling attraction in every sense of the word. Part theme park, part museum, part artistic installation, it’s set on 7.5 hectares at Wattens, just outside Innsbruck, and has recently been renovated.

The first sight for visitors arriving at this highly popular attraction is of a giant’s head with illuminated crystal eyes and a waterfall coming out of its mouth.

As you move on, there are five new chambers of wonder showing various artistic installations such as a crystal tree and a primeval world.

Of course, when you get to the end, there’s a Swarovski shop where you can buy the world-famous crystals, a magnificent garden with the dazzling Crystal Cloud over a Mirror Pool and the classy Daniels Restaurant. 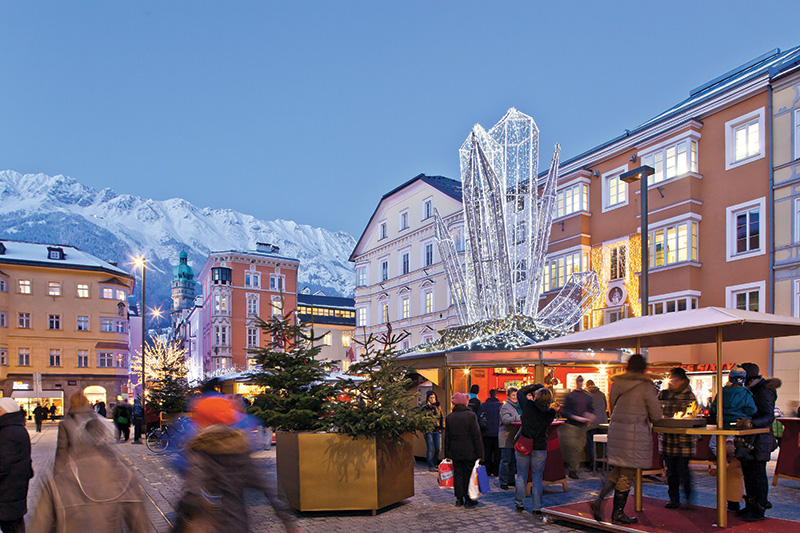 You can shop for Christmas ornaments and Tyrolean handicrafts, and be entertained by street performers, punch and judy shows, storytellers and musical performances. There’s also a retro merry-go-round and a 15-metre tall Swarovski Christmas tree decorated with 170,000 sparkling crystals. Vendors sell a great array of street food, from steaming-hot mulled wine, to kiachin, a doughnut filled with sauerkraut or jam. 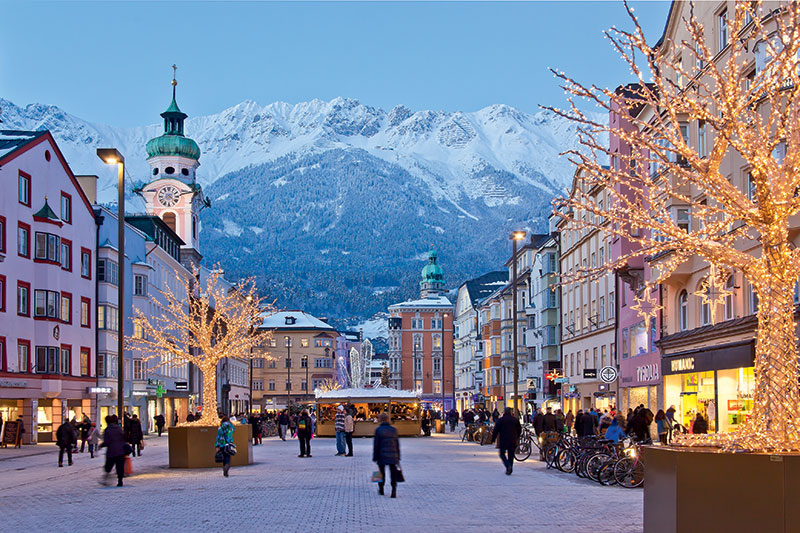 8. The shopping
Innsbruck’s main shopping street, Maria Theresien Strasse, is a short walk from the Old Town. In this busy and wide pedestrian street you’ll find baroque buildings, the Triumphal Arch and more than a hundred shops.

It’s a good place to warm the spirits with a spicy glühwein as you take in the views to the north of the Nordkette mountain range.

Whether along Maria Theresien Strasse, or elsewhere, Innsbruck has a strong presence of stylish outdoor leisure brands. Find them at the likes of the Matadorworld Freeride Fashion House, DC Store Innsbruck, Blue Tomato and Luis Trenker, a store that sells coveted South Tyrolean alpine lifestyle clothing.

One thing to include on your shopping list is Acqua Alpes Fragrance. This fragrance, by the Tyrol’s first perfume makers, uses the smell of wildflowers and water rich in minerals that trickles down the rocks of the Nordkette mountain range.

The oldest cake shop in the Tyrol should be included on any shopping excursion. The Konditorei Café Mundig, near the Golden Roof, has been there since 1803 and has cakes and pastries made to traditional recipes.

And don’t miss the classic Café Sacher in the Hofburg Imperial Palace. This, of course, is where you’ll pick up your slice of Sacher torte. •

WHERE TO STAY
• Nala Hotel is a four-star designer property just two-minutes’ walk from Maria Theresien Strasse. nala-hotel.at
• Hotel Weisses Kreuz is a three-star hotel packed with history and character in the Old Town. weisseskreuz.at
• The four-star Sporthotel Igls has an award-winning restaurant, indoor pool and spa area, situated in Igls at the doorstep of Patscherkofel. sporthotel-igls.com
• Combine a snowshoe hike under the moonlight and a night in an igloo at the Iglu Village Kuhtai. iglu-village.at/en/

WHERE TO EAT
• Café Sacher not only serves its traditional sacher torte but has a menu of Austrian classics. sacher.com
• Goldener Adler serves up veal schnitzel, grostl and homemade apple strudel. goldeneradler.com