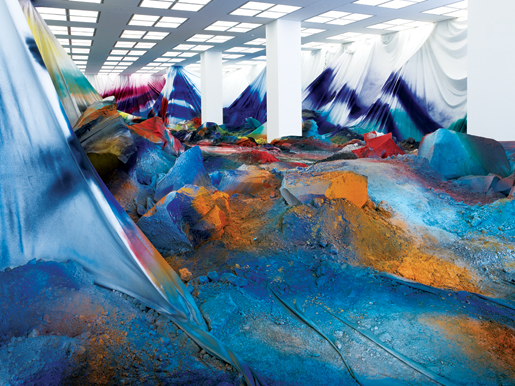 Garage Museum of Contemporary Art opened its brand new premises in Gorky Park in June 2015, after being housed in a temporary space designed by Shigeru Ban. The Museum, established in 2008 by Dasha Zhukova (girlfriend of billionaire Roman Abramovich), is now located in the Soviet-era Vremena Goda pavilion, which underwent an extensive renovation by designer Rem Koolhaas. Garage reflects on current developments in Russian and international culture, and its collection is the first to focus on Russian contemporary art from the 1950s through to the present.

The first exhibition is Katharina Grosse: yes no why later, with the German artist creating one of the largest site-specific installations ever seen in Moscow. Challenging perceptions of what painting is, the installation yes no why later will metamorphose the 800 square-metre exhibition hall into a spectacular, immersive environment through which visitors can meander. Producing the work specifically for the Pavilion, the result is a haunting, unearthly, ‘living picture’ that visitors can move through, composed of soil and trees sculpted into surprising formations and contaminated by vivid, raw colour. The exhibition is on until 9 August, 2015.

Above: Katharina Grosse: yes no why later
garageccc.com/en