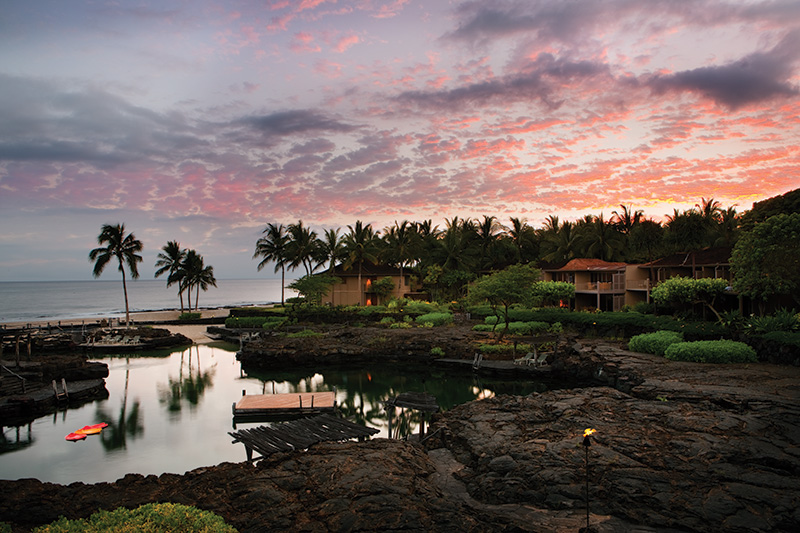 Nestled along pure beachfront on the Big Island of Hawaii’s ‘sunset coast’, this resort meticulously combines the luxury touches Four Seasons is well known for, alongside the ultimate in Hawaiian indulgence.

At the Four Seasons Resort Hualalai, you’ll find 253 rooms, all of which are housed in two-storey, bungalow-style buildings. The pick of the rooms are the Deluxe Ocean View Suites, which feature Hawaiian-inspired furniture, artworks and local amenities, alongside luxury furnishings including a full granite master bathroom with deep soaking tub, separate glass-enclosed shower and outdoor shower.

Given the resort features seven pools and swimming areas, from a saltwater lagoon pool stocked with 3,000 tropical fish to a private, adults-only sanctuary, you really won’t be spending that much time in the rooms. The pick of the pools is the Beach Tree, where you will find cold towels, alcoholic popsicles, a constant flow of iced water and sunscreen and poolside service you’d expect in Los Angeles. There’s also a private beach where turtles can be seen surfing the waves and some of the most epic sunsets.

There are also six dining options, including V&T’s pick, the Beach Tree, which features alfresco dining by day and a lively lounge scene by night, where chefs use fresh local ingredients on a menu that’s Italian-Californian. There are over 50 wines by the glass and the menu is well priced, while at ULU, 75 percent of the restaurant’s menu features ingredients fresh from the ocean and local farms.