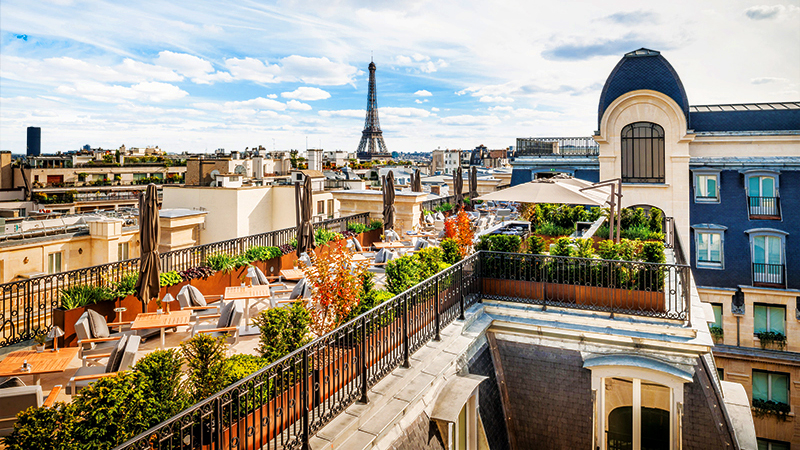 Just when you think Paris couldn’t get any classier or stylish, The Peninsula Paris opened its doors just over a year ago, a haven of history and the modern, the new embodiment of luxury in the City of Lights.

Stepping into The Peninsula is stepping into history. This is where Marcel Proust conversed with James Joyce and Pablo Picasso at an infamous dinner given for Igor Stravinsky by art patrons Sydney and Violet Schiff in 1922. This is where George Gershwin wrote An American in Paris in 1928, and this is where Henry Kissinger in 1973 negotiated the end of the Vietnam War.

In the spot where Russian oligarch Count Basilewsky built his grandiose palace in 1864, and later the exiled Queen Isabella II of Spain resided, by 1908 one of the grand iconic hotels of Paris, the Hotel Majestic, was opened and embraced by Paris society. Even then ahead of its times, the hotel used innovative reinforced concrete in order to create large open spaces without the need for columns, and offered private bathrooms in its rooms and suites.

Briefly commandeered as a military hospital during WWI, the hotel played host to countless celebrities in its day, until it was purchased by the French government prior to WWII, serving as the Ministry of Defence, later evolving into the first headquarters of UNESCO. In 2008 the French Government sold the property to Qatari-owned Katara Hospitality, who, in partnership with the Hong Kong and Shanghai Hotels group, set about creating not only the first Peninsula property in Europe, but also a luxury hotel that would meet and exceed even the highest expectations of visitors to Paris, while embracing the history of the site.

Walking into The Peninsula is walking into a luxurious wonderland. I couldn’t help stopping to marvel at the Dancing Leaves installation, 800 hand-blown crystal leaves floating in the lobby. The staircase next to the grand piano was originally created by Schwartz & Meurer who built the Eiffel Tower, while individual art works, such as a zen-like rock sculpture, are reflected in the shiny marble floors.

And this is only the first impression.

To not only lovingly and authentically re-create the Hotel Majestic’s superb building inside and out, but to also add modern amenities and extra touches to the hotel, all under the watchful eyes of three French heritage bodies, it is probably not surprising that the renovations took more than four years, when the original building only took two years to complete.

Imagine sourcing and using stone from the same quarries as in the original construction; employing 20 stonemasons to restore details on the façade such as stone flowers, ribbons and bows, a fiddly work that took up to 12 hours for one small bow. Imagine using 40,000 pieces of gold leaf to cover an area of 200sqm, and hand-shaping each and every roof tile.

The work that went into the restoration of the hotel is simply mind-boggling.

Imagine taking up the original floor from the lobby, taking it to Italy for restoration and repair, then redesigning it and putting it back into the two inner courtyards. The two paintings in the ceiling of the Cigar Lounge, one of the hotels food and beverage outlets, were restored by an expert who also restored paintings by Leonardo da Vinci in the Louvre. 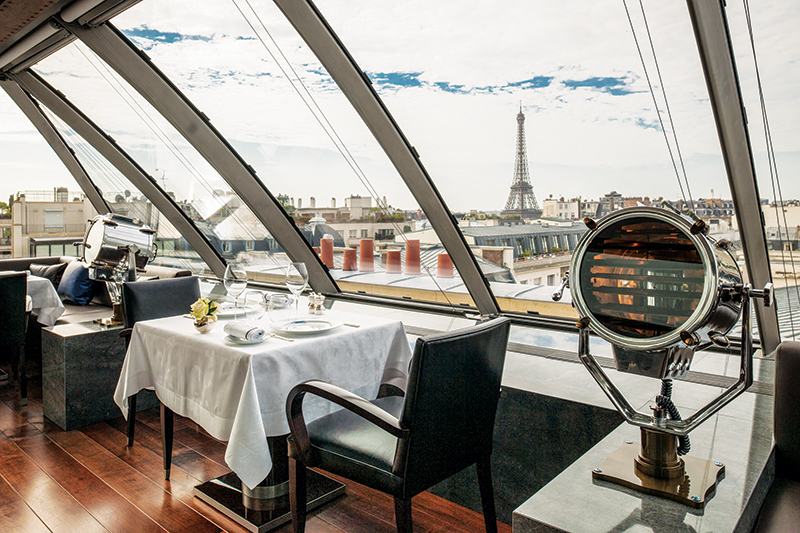 Yet while I step into history, I also step into a superbly modern and lavish space that offers guests anything they could possibly wish for. Small things like free WiFi are enhanced by adding free international calls; there are nail-dryers in the rooms, in which everything can be controlled though interactive digital tablets in 11 languages; there are not one, but five roof terraces offering views as they only ever come in Paris, from the nearby Arc de Triomphe across the sparkling Eiffel Tower to Sacre Coeur, and all the iconic rooftops in between. The luxurious spa and 20m swimming pool are located in a basement, which was dug out underneath the original building, a feat nearly unimaginable considering Paris’ extensive subterranean network of tunnels. It wouldn’t surprise me at all if they had diverted a metro line to get the basement just right.

And then there is the plane on the roof. The plane that gives the L’Oiseau Blanc restaurant its name, while an aeroplane engine sits inside the restaurant, strangely enough not diminishing the chicness of the setting one bit. This is where it shows how much The Peninsula Paris has managed not only to recapture history, but also capture the imagination of the locals. Instead of being a hotel-guest only restaurant, it is filled with enthusiastic Parisians who adore the space. It is what The Peninsula set out to do: bringing together old and new, visitors and Parisians, utter indulgence and understated elegance. Hospitality at its best.

From Australia, Air France offers over 330 weekly flights with its codeshare and interline partners via several Asian gateways. airfrance.com.au