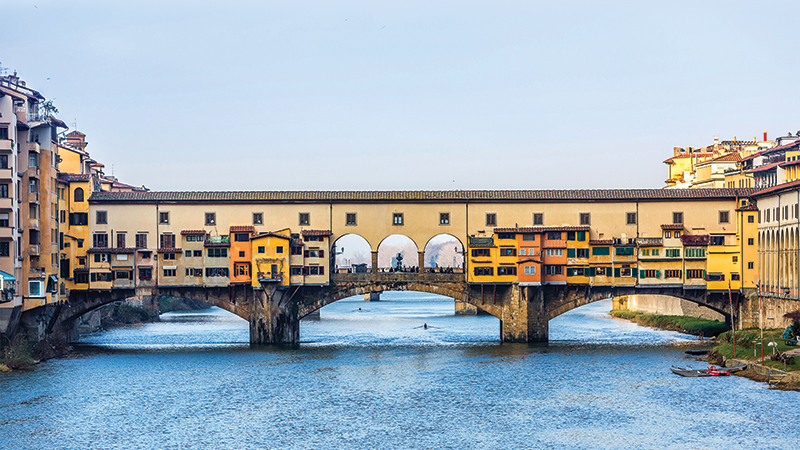 Behind the medieval stones and the elegant palazzos of the once powerful de Medici’s lies centuries of artwork, celestial frescoes, cosmopolitan culture and idyllic pursuits.

Firenze, or Florence to the rest of the world, thrives on paradox. It is impossible to walk around and not take in its canvas of Medieval splendour – a confection of terracotta rooftops, hypnotic domes and celestial bells which have slumbered adjacent to the time-worn waters of the Arno River for centuries. Or not to feel the heartbeat of artists who have left their indelible mark in marble and stone. Yet it is its capricious and youthful exuberance which takes me by surprise; a juxtaposition of present day shock currents and cultural incursions that touches something primal, each visible at every turn.

“Just look around and you will see elderly women on bikes adorned in Ferragamo and gold. Students of the digital age immersing themselves in the glories of Florence’s cultural past – Galileo, Machiavelli, Raphael, Botticelli and Leonardo da Vinci. Old couples sipping a latte at Caffe Gilli while browsing Facebook,” says artist and New York native, Lucia Martinelli who came to Florence a decade ago to paint. “The city is always inwardly moving forward, quietly adapting, but it never strays from its foundations.” And unlike other Italian cities grappling modern times, Florence’s continuity is void of vulgar growing pains.

Busy in detail and perfect by scale, a brushstroke of architectural elegance, Florence makes no apologies for flaunting its beauty and historic narrative, nor its formidable wealth of sublime treasures.

Then there are its other natural bounties; its location for one; a dimple of land that nestles in the rolling countryside of fabled Tuscany, where ancient hills rise and caress its skyline and cobbled streets in a fortitude of evocative disguises.

Small wonder that artists and writers flocked to such a setting where under a canopy of brooding clouds, Florence’s soft-coloured buildings conjured up rich imaginations; a matchless expression of painstaking artistry sculpted by time. 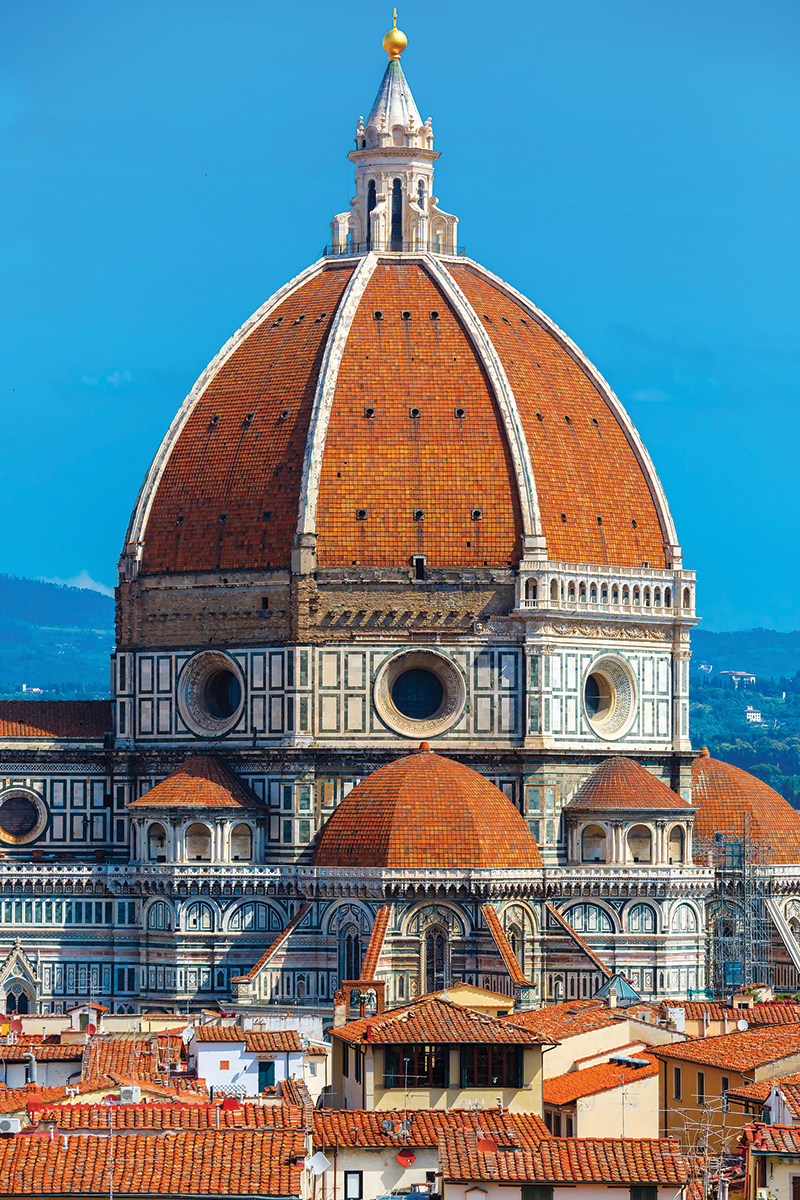 Gazing out from the third floor of The Savoy to drink in the view of Piazza della Repubblica, I watch the playful buoyancy of the crowd. I soon think of the lovers, George and Lucy from E.M.Foster’s A Room With A View while I watch couples with cameras snapping away amid an incessant flock of pigeons; strutting and fluttering around bustling pedestrians heading for Gucci, Prada and Dior. Then I hear it – the hum of conversation from Caffe Gilli’s outdoor tables fusing with the quiet fervour that I discover is everywhere. In the luxe fashion boutiques that fan around the patterned facade of Santa Maria del Fiore – Florence’s iconic cathedral known as the Duomo, the frenzied Florentine markets, the museos and the other neighbourhood cafes that encircle the city’s unremitting marvels from the Renaissance age. The city’s underlying verve is spellbinding.

Maybe it’s because of Florence’s enduring pedigree that everything permeates here, where whims are indulged and the sensory emotions are ignited.

So often the city’s most photographed treasures are linked to the de Medici family; rulers of the Republic of Florence, and whose fortune in banking positioned them as patrons of the Renaissance movement – in particular Cosimo, who established a small museum, now the site of the Uffizi Gallery which straddles 14th century Piazza Vecchio near the banks of the Arno and his grandson, Lorenzo whose artistic veins also ran deep.

As I make my way around the crowds bursting at the Uffizi Gallery’s seams I spy on many masterpieces hung high and low; a craning of the neck and shoving of shoulders. It is not until Florence falls into an almost unworldly stillness – long after I view the masterworks in the galleries – that I really take in the sheer scale of what I have just seen in a day with my guide, Roberto; Botticelli’s Allegory of Spring, Giotto’s Madonna, sumptuous portraits and sculptures that are almost matched at Palazzo Vecchio and the Gallery of Modern Art in the Palazzo Pitti – places where wanton queues have not fallen into insurmountable ruin. 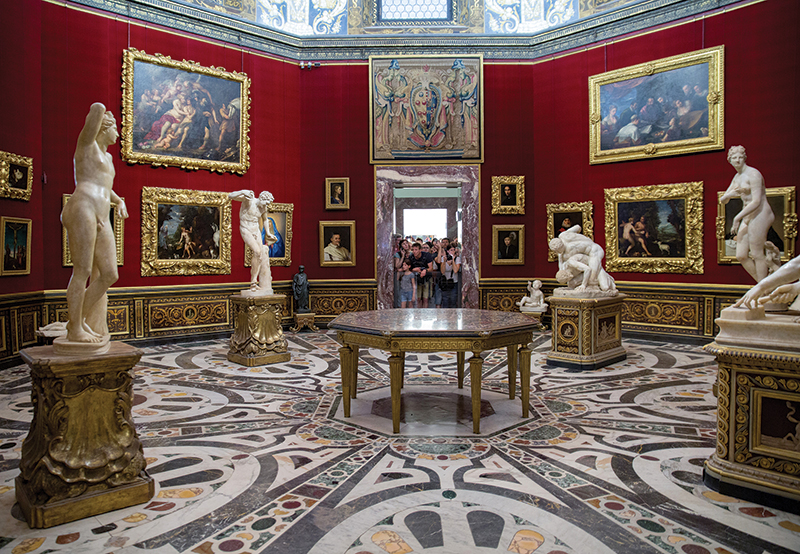 Despite treading gingerly around tapered corridors and sumptuous frescoes, the theme of viewing grand museums is pre-conditioned before you even step foot outside your hotel door. So my time at Museo dell’Opera del Duomo is well-spent milling over the collection of sculptures by Michelangelo and Donatello before I wander the marbled floors of the 14th century Pitti Palace viewing the Porcelain Museum and Costume Gallery, always with the fascination of a wide-eyed child.

Also a purveyor of lavish Florentine jewellery, Roberto takes me to his family’s establishment, six generations of merchants who have maintained a shop on the Ponte Vecchio, the oldest and only bridge in the city that was not destroyed by the German Army during the Second World War. “It’s about family lineage and passing one legacy down to the next generation – where daily life takes to the streets with Florence’s bloodline in tact,” attests Roberto who also describes the city’s immense architectural beauty as a “living, breathing canvas.”

But to see the Tuscan capital simply as Italy’s pre-eminent city of cultural indulgences and mellowed haunts is a travesty. Among Florence’s other artistic accomplishments are the fashion brands that claim the city as their own; Roberto Cavalli, Gucci, Emilio Pucci, Ermanno Scervina and Salvatore Ferragamo, which opened the Ferragamo Museum on Palazzo Spini Feroni just over two decades ago. I while away the afternoon looking at the maestro’s sketches, photographs and the wooden lasts of the world’s most glamorous and famous feet. And before the day has ended I head at a high trot to the equally lavish Gucci Museum, where I go on a licentious fashion journey with the iconic label.

Florence always imparts a sense of the unexpected as the Stibbert Museum soon reveals to me through its incredible display of armoury and military artefacts. And such is the immense beauty of Michelangelo’s flawlessly sculpted statues at the Medici Tombs, the architectural splendour of Ghiberti’s Baptistery Doors – The Gates of Paradise at the Battistero di San Giovanni – one of Florence’s oldest cathedrals, and the Campanile where I encounter prophets from the Old Testament. Amid a chorus of celestial chimes from its bell tower, I completely lose track of time – but it is no wonder, as I’m in the protracted world of papal splendour. 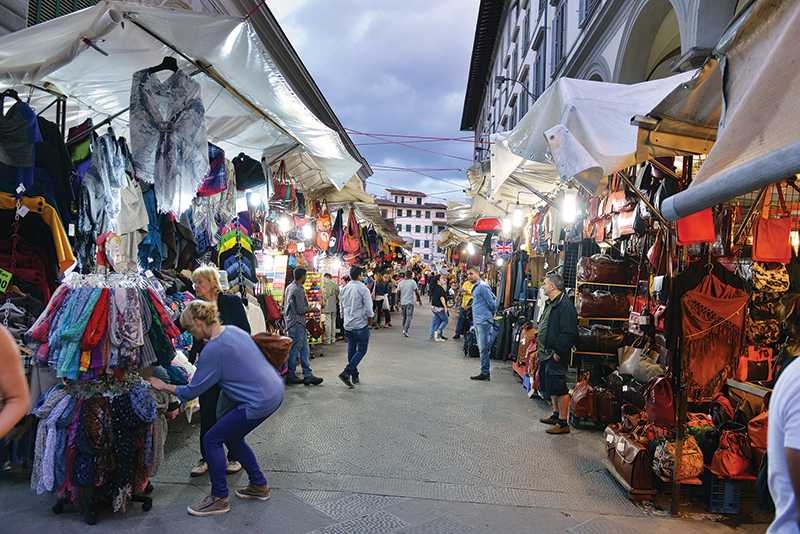 Hidden deep within the labyrinth of alleyways that weave around the shadows of the Duomo cupola are a series of flea, antique and food markets, the real holy grail of Florentine dining, where my American-born hostess, Judy, walks me past a cornucopia of crates laden with eggplant, zucchini, wild field mushrooms and prized white truffles, and a carnivorous selection of pork sausage and poultry.

“The trick is to find a distinctive dish laden with fresh Italian produce that can be yours to solely create, to claim it as your own,” she says as we seat ourselves at an outdoor marbled-topped cafe table on the fringe of San Lorenzo markets, and settle into the familiar rhythm that anchors Florentine life – food. When it comes to pasta, Florence seems to know no limits. Married to an Italian wine manufacturer (everyone seems to own a vineyard in Tuscany), Judy is no stranger to seeing nonnas sporting cucina aprons at neighbourhood trattorias; vibrant haunts where diners clean every home-cooked morsel off their plates. Living locally, such landmarks she says create the right balance between the romance of Florentine dining and the need to maintain its roots – munching on a focaccia panini while pounding an espresso and talking politics at a neighbourhood café.

Eating anywhere in Italy has always been a joyful experience. And as to be expected Florence’s nocturnal pursuits are driven by divine gluttony; truffles from Piedmont; seasonal delicacies from Umbria, unforgettable samples of tomato paste and a drizzle of olive oil, Chianti from Arezzo’s ancient vines. Such bounties can also be enjoyed as ‘Florentine cooking class experiences or at a nearby Tuscan farmhouse; the very rustic setting where I find myself learning how to make ragù alla bolognese, tiramisu and a delectable carbonara sauce.

Florence also lays claim to a more unsung charm, the exalted gelato, one of the taste sensations that can make you weep with joy after a day of navigating a maze of hovering angels and apostles on canvas and narrow cobbled laneways.

It is twilight and the city is dappled in the afterglow of a mild winter’s day. I am savouring a gelato within striking distance of Michelangelo’s David, where his bulging veins and tense, rippled muscles from the ensuing battle with Goliath cuts unapologetically into my reverie.

Maybe it’s because David never got to sample such fanciful, Florentine indulgences.