For first time visitors to this city by the lake, it is seriously impressive. So much so that you can’t help but fall in love at first sight. Here are ten of the best things to do on a first visit. 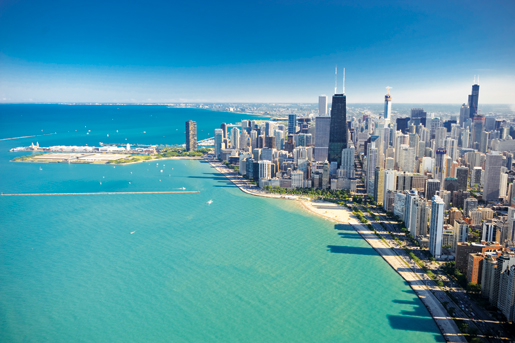 Chicago. The name conjures up thoughts of Al Capone, the Irish, the band (they are the second highest selling American band of all time behind the Eagles), the Cubs, and of course, the musical – cue All That Jazz. Chicago sits on the southeastern corner of the ridiculously large Lake Michigan, which has a shoreline of 42 kilometres and a swag of white sand beaches, all caressed by striking blue water that wouldn’t be out of place on a tropical island.

The city was completely redesigned by an inspired gent named Daniel Burnham after the Great Chicago Fire of 1871 and now is a showpiece with vast parklands, innovative architecture and magnificent galleries and museums. Chicago was home to the first skyscraper (the Home Insurance Building in 1885), had the tallest building in the world for decades, yet hasn’t thrown out tradition in favour of innovation; the scoreboard at the 101-year-old Wrigley Field is operated manually, one of two in major league baseball to do so.

Add to that the city’s 77 neighbourhoods, the historic elevated train lines, the hotter than Hades dining scene and the many famous jazz clubs, and you have one incredible vacation destination. 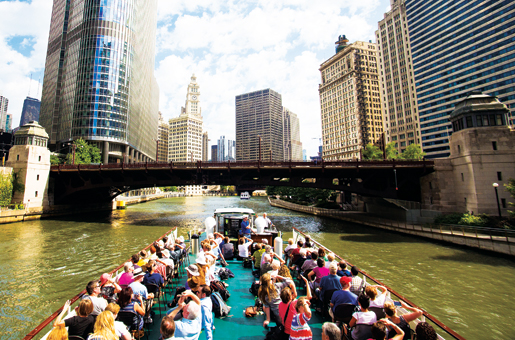 Architecture Foundation River Cruise
While the name might not sound like the hottest tour in town, be assured that it is. Chicago’s First Lady Cruises operates the Chicago Architecture Foundation River Cruise on a fleet of five classic vessels reminiscent of the graceful wooden cruising yachts of the 1920s. We settle in on the open-air top deck for the 90-minute cruise, with a highly qualified guide delivering a fascinating commentary on the city’s history, along with descriptions of about 50 buildings, including the Wrigley Building (yes that Wrigley), the Boeing Building, Trump Tower, Chicago Tribune, Willis (formerly Sears) Tower, Merchandise Mart and the Mercantile Exchange. It is a great way to look at the skyline, with the vessel cruising on three arms of the River and passing under 13 of the city’s movable bridges. The tour slogan is ‘90 minutes of amazing’ and we’d have to agree. Make sure your camera is fully charged.

The Ledge on Willis Tower
Standing on what feels like air, 412 metres above the bustling streets of Chicago is a little daunting, but it is a box that must be ticked. Willis Tower, formerly known as Sears Tower, rises 108-storeys above the city and the 99th floor is home to the Skydeck, giving heart-palpitating views over the lake, beaches and city. To really get the heart rate up go out on The Ledge – glass boxes that extend out from the building for more than a metre. It’s all glass but believe me, taking that first hesitant step out into what feels like nothing is slightly scary. Once there, record the experience for posterity and look down, way down, at the people going about their business like ants doing the Queen’s bidding. We go back again that night which is just as exciting. For more eye-popping views, head to the 94th floor of 360 Chicago (formerly the John Hancock Observatory) and enjoy brilliant views, particularly over the beaches to the north, then strap in to Tilt, a horrifying glass contraption that tips you out from the side of the building, giving you a face-first view. 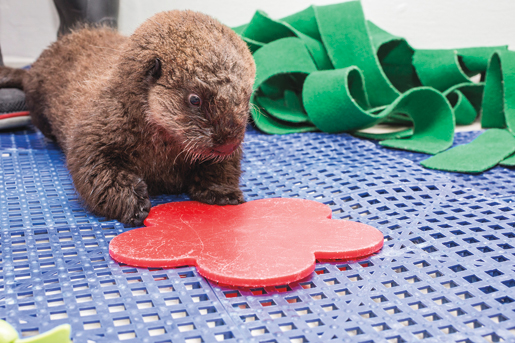 Shedd Aquarium
Shedd Aquarium is a pleasant walk through Grant Park from Michigan Avenue on the lake foreshore. It’s home to 32,000 aquatic animals from over 1,500 species of fish, reptiles, amphibians, invertebrates, birds and mammals from around the world. We sign up for something special, a Beluga Encounter, and watch trainers interact with these unusual looking small whales. The trainers don’t want the beautiful belugas to jump through hoops or leap out of the water; all the techniques allow the staff to do health checks on the whales and make sure they are healthy everywhere from teeth to tail. These creatures really are beautiful and seem to smile at us. While there, check out the other incredible exhibitions and visit the cutest inhabitant at Shedd – a rescued sea otter pup called Luna. 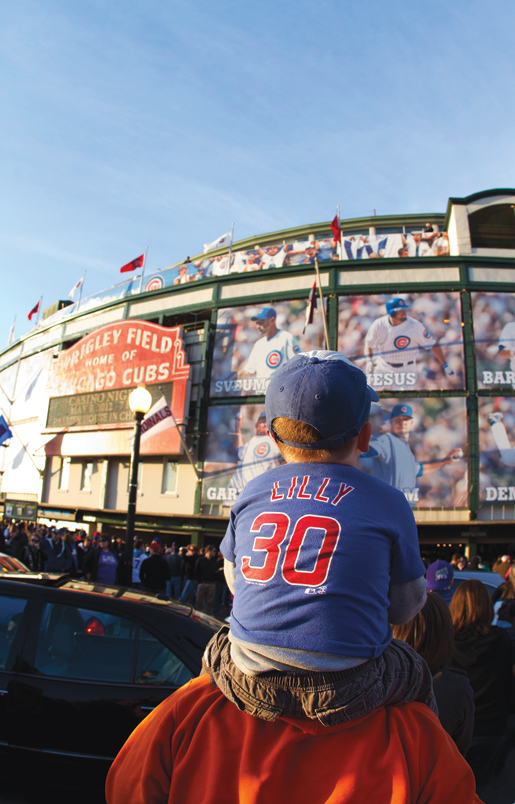 Catch a game at Wrigley Field
This is hallowed ground; Wrigley Field, home to the Chicago Cubs. We seep into the ground in a wash of people wearing blue and red and are lucky to be invited into a corporate box which has a perfect line of sight onto the pitch. We meet Fergie Jenkins, a famous Cub who is in the Baseball Hall of Fame, we have a proper Chicago hot dog and we go and sit in the stands in the shadows of the manual scoreboard and cheer every run and every catch as the Cubs flog the Phillies. We also do a tour of Soldier Field, the home of the Chicago Bears in
the NFL. It’s a beautiful field with a Colosseum vibe, built as a memorial to fallen soldiers – not just of the USA but also of her allies. 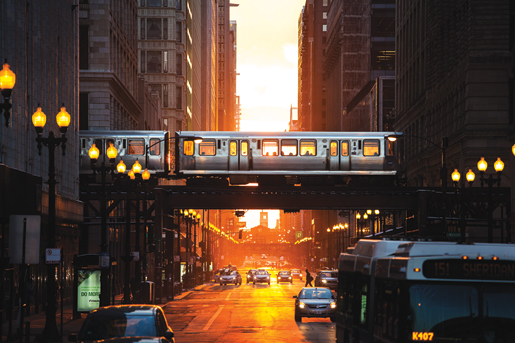 Ride the L
The city’s famous “L” which stands for ‘elevated’ train line, has been immortalised in many movies and TV shows including The Fugitive, ER, While You Were Sleeping, The Hunter and The Sting. We ride the Brown Line out to Armitage, boarding at Quincy station, which has been beautifully restored to its original condition circa 1897. It’s a bit strange looking through the sleepers and seeing the traffic buzzing down below. We watch the city rattle by, getting off at Armitage which has some quirky boutiques and galleries and a café called the Blue Door Farm Stand which Oprah once owned. Surprisingly, they serve flat white coffee! We stroll to Lincoln Park, stopping to look at the striking statue of Ulysses S. Grant, former civil war hero and US President. The Park is vast, and includes a historic cemetery, zoo and the Conservatory. It is great for people watching, with the lakeside path a scenic distraction.

Park it
Grant Park, named after the aforementioned Ulysses S. Grant and designed by Daniel Burnham to be over 100 hectares of landscaped green space that ‘belonged to the people’, was separates the downtown area of the town from Lake Michigan. The park’s highlights include the Art Institute of Chicago, Buckingham Fountain and in the southern corner, Millennium Park. Millennium Park features a magic blend of architecture, gardens and eye-catching public art, with the most visited being what is officially known as Cloud Gate, which was British artist Anish Kapoor’s first installation in the USA. It was inspired by liquid mercury, but looks like a coffee bean; hence its nickname, ‘The Bean’.  It is the place to take selfies, as the city is reflected in the silvery mirror-like surface of the intriguing sculpture. Also visit Lurie Garden, the Crown Fountain and the Frank Gehry-designed Deconstructivism-styled performance stage known as the Jay Pritzker Pavilion. In the southwest corner of the Park, we are struck by the poignant Agora art installation, which has over 100 three-metre tall headless cast iron torsos, walking in different directions.

Magnificent Mile
While Grant Park is the playground of the city, the Magnificent Mile is the epicentre of shopping, dining, history and accommodation. Located along a 13-block stretch of North Michigan Avenue from the Chicago River to Oak Street, the Mile is indeed magnificent with over 460 shops, 275 restaurants, 60 hotels including the five-star Peninsula Chicago and attractions sewn like gems along a billowing cloak. Perhaps the most famous building is the historic Water Tower, which was built between 1867 and 1869 for Chicago’s municipal water system to house a huge iron standpipe used to regulate water pressure. It is one of few buildings to survive the Great Fire, as was the Pumping Station to the east – with both buildings designed by William W. Bovington. Admire the beauty of these buildings before shopping at luxury brands like Chanel, Louis Vuitton, Gucci or Burberry, then pop into the Peninsula Hotel for afternoon tea.

Museum of Science and Industry
One of the largest science museums in the world, the Museum of Science and Industry has over 35,000 artefacts in 37,161 square metres of hands-on exhibits designed to spark scientific inquiry and creativity. Highlights for us include a German U-505 submarine that was captured by the Americans in 1944, a 999 steam locomotive, an old United Airlines Boeing 727 and a Pioneer Zephyr Train that you swear is about to pull out from the station with a honk. We are mesmerised by ‘Science Storms’, a huge exhibit that reveals the extraordinary science behind some of nature’s most powerful and compelling phenomena, and ‘YOU! The Experience’, which explores the human mind, body and spirit.

Art Institute of Chicago
Lovers of all things art will know that the Art Institute of Chicago is one of the world’s leading art museums. Just down from Millennium Park and the Crown Fountains, two giant carved lions stand guard on the museum, and rightly so. Inside these halls you’ll find everything from the latest work by contemporary artists to ancient Chinese bronzes, as well as an internationally-acclaimed collection of Impressionist and Post-Impressionist works by Monet, Renoir, Degas, van Gogh and other painters of the period. The Renzo Piano-designed Modern Wing is devoted to a stunning collection of 20th- and 21st-century art.

Lake Michigan
The lake is an unsung star of the city and is never far out of view. Stroll along the Lakefront Trail, along the lakeside promenade, or hire one of the Divvy bikes – a sensational bike sharing program with thousands of bikes at hundreds of stations across the city available 24 hours a day. Each station has a touchscreen kiosk, station map, and a docking system that releases bikes using a member key or ride code easily purchased using your credit or debit card. Chill out on one of the beaches along the lakefront with Oak Street one of the best with fabulous views of the city skyline. It has an interesting history – Johnny Weismuller – he of Tarzan fame, worked as a lifeguard here in his youth. The biggest attraction along the lakefront is Navy Pier, a veritable treasure trove of entertainment, museums, activities, restaurants and shops. The view from the Ferris wheel is worthy of Instagramming. •

Cabs are cheaper than in Australia and are easy to find. To ride the L (Elevated) train, purchase tickets at the stations: transitchicago.com