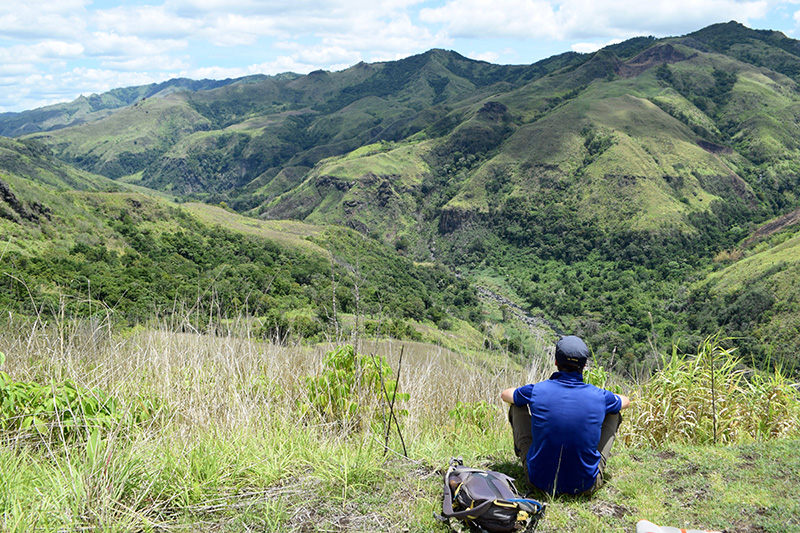 Trekking through Viti Levu Island is as much a cultural exercise as it is physical. The inland region of Fiji’s largest island features much of the ‘old way’ no longer found in urban centres, and landscapes not found in tourist brochures. Fiji may be synonymous with vibrant coral reefs and sparkling lagoons, but the highlands are for the slightly more curious at heart. Cliffs, creeks and remnants of cannibalism have their home here in the rugged interior and this is the Fiji that is most memorable.

Five days of hiking with the island’s only dedicated hiking company, Talanoa Treks, is what takes me through the peaks and valleys of Viti Levu. Nights spent in traditional villages and days spent on barely visible trails are far from Fiji’s more marketed island resorts and beaches.

Titled ‘The Full Monty’, this hike runs at roughly 45 kilometres through a kaleidoscope of landscapes and several different provinces. Talanoa Treks founder Matt Capper stresses the role that interaction plays in these adventures.

“The hikes are great but they also give people a reason to be in a village, to cross the land and to talk to the people of this country,” he says. 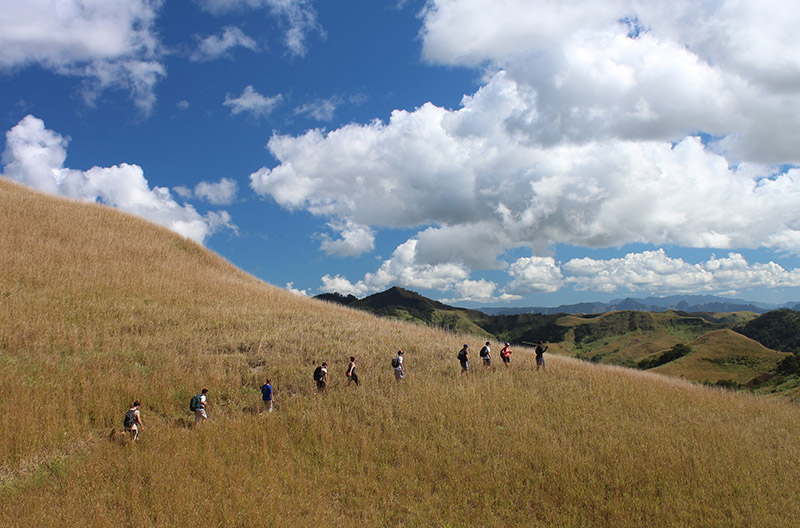 As there are no signposts on these walks, local guides from the nearby villages are on hand to lead us along paths that have connected farms, rivers and neighbouring villages for centuries. The first of these trails leads us to the Nabalesere waterfall.

It’s my first of the five days and an early start driving from the capital city of Suva to Nabalesere village in the Fijian province of Ra. When we arrive, the village is just recovering from the throes of watching the national rugby sevens team dominate an international tournament. The fast-paced abbreviated code of rugby is followed religiously in Fiji and spirits in the village are high. Much of this euphoria is reflected in our reception, and the smiles that Fiji is so well known for are abundant.

The nature of a Fijian village is simple in its everyday activities and complex in its human relationships. Women are seated in a different area to the men during our sevusevu, a traditional welcome ceremony with the sharing of the kava drink. The powdered roots of the piper mythisticum are mixed and shared as an act of offering and of friendship. The village headman is served first and grants us access to the stunning Nabalesere waterfall. 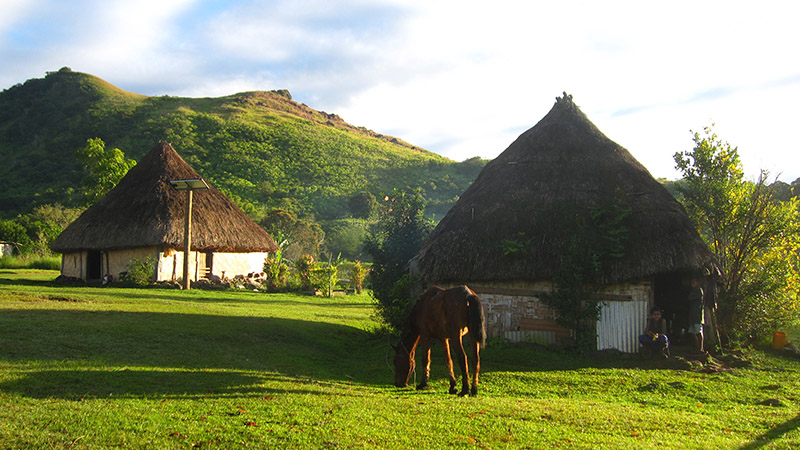 The shortest hike of the trip, our three-kilometre walk to the waterfall is punctuated by stories and muddy slopes. Children dash past us, the rosaries swinging from their necks an indication of Nabalesere’s dominant Catholic faith. But despite the widespread conversion to Christianity, many stories of old still stand.

Varone, our Nabalesere guide explains the yells and shouts we hear as we approach the river. “The children are yelling to let the spirit of the waterfall know we are coming. In return, we are kept safe from harm while we bathe and fish,” he says. The waterfall in its setting is spectacular, cascading down into a wide pool that is now being invaded by energetic teenagers and children from the village.

The brief nature of this hike may have built up some overconfidence in my physical abilities going into the next four days, but it also set a high bar for the rest of the trip. A chilly dip in the water is enough to stave off the tropical heat and we soon make our way back to Nabalesere village, where we are picked up and driven to the northern town of Tavua. Our home for the evening, Navai village is about an hour and fifteen minutes inland from Tavua town and accessible only by a four-wheel drive over an off-country mix of stone and dirt. 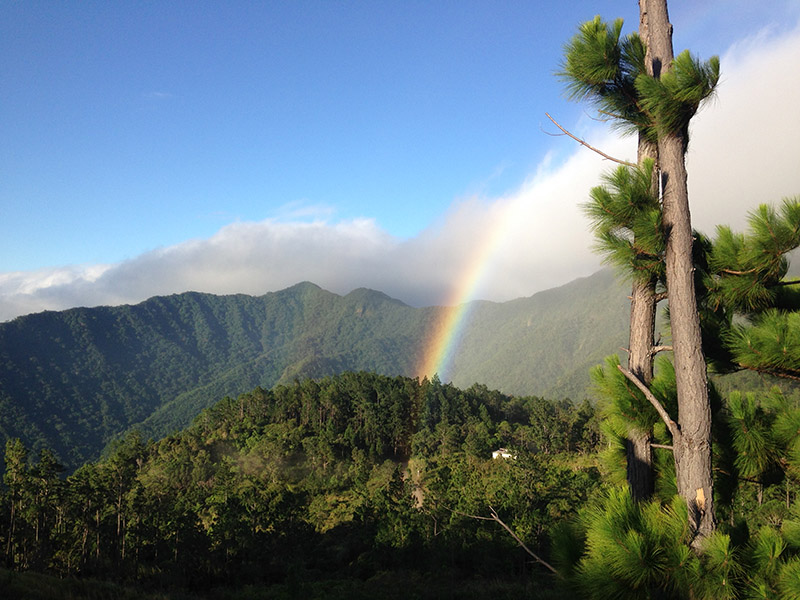 Deep in the highlands, we spend the night in shared rooms at the base of Fiji’s highest mountain, Mount Tomanivi (formerly known as Mount Victoria). The Wainibuka and Wanimala Rivers (that eventually merge to form the Rewa River) originate around here, as does Fiji’s longest river, the Sigatoka. With weary eyes and an eager stomach, I sit amongst the hikers as a dinner of curry and fresh salads is served to the sound of a running river nearby.

Our host, Meli, was a pioneering member of Fiji’s only local biodiversity non-government organisation, Nature Fiji. He and a few other Navai villagers are our guides the following day, when we are awakened at sunrise to begin our climb.

Meli’s time with Nature Fiji resulted in an extensive knowledge of Fiji’s flora and fauna, with particular attention to birdlife. From the ambulance siren of the Giant Forest Honeyeater to the gruff call of the Barking Pigeon, our ascent is injected with quips of Meli’s knowledge and brief flashes of coloured feathers. 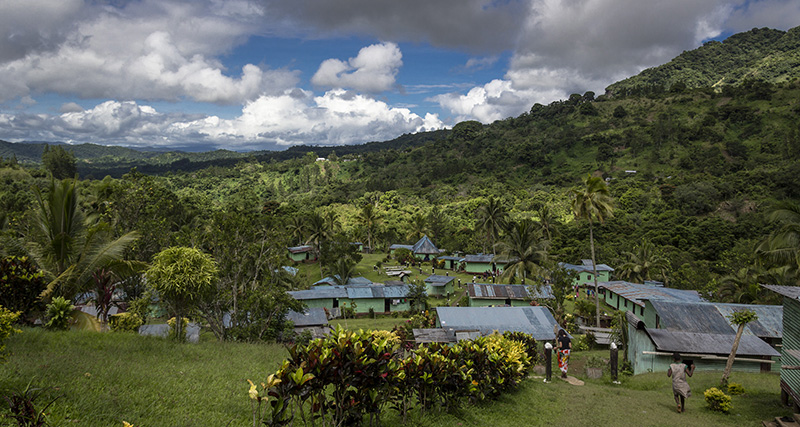 Not for the faint of heart, the climb reaches the ‘crater’ of this extinct volcano and soon steepens, requiring bouts of hand over hand rock-climbing before we reach the summit proper. Fiji’s drier and cooler season lies between May and September which is when we conquered the climb, resulting in minimal rain and less than sweltering temperatures. At the highest peak on the island, I look down on the surrounding forests and distant plains. Below me lie the headwaters of Fiji’s longest river and above me is nothing but sky. Much of this hike is physically exerting but a worthwhile journey into Fiji’s extremes.

Nine kilometres later, we are back in Navai village and packing up our gear to head to the ‘Heart of Fiji’. The rugged interior continues to enchant me as we journey to where even many locals haven’t ventured. The centre of Viti Levu is said to lie in Naga village, which is where we spend our third night, telling stories over bowls of kava under the glow of lamplight.

With a slight kava hangover, we rise at dawn and walk the trail that Naga’s ancestors used to access their farms. Trekking through grassy hills peppered with giant boulders, we begin our descent into the valley that cradles the Sigatoka River. Flowing for 120 kilometres, the glistening river winds through the central and western ranges, providing a means of transportation for many interior villages.

Once in the valley, we are shown the original site of Naga village, prior to floodwaters forcing them to relocate. Here also lies the ‘sharing stone’, a concrete reminder of Fiji’s cannibalistic history. 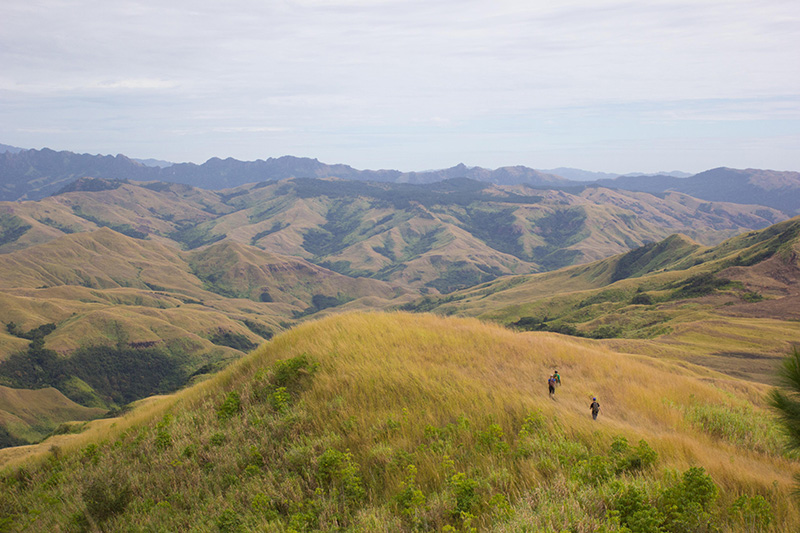 In 1867, an English missionary, Reverend Thomas Baker was killed and eaten over a cultural offense in the neighbouring village of Nubutautau. After his death, his body was handed to a riverside village to dismember and distribute. Once we reach the river, we are taken to the flat stone surface that held Reverend Baker’s body as it was torn apart and shared.

You will not hear of this history in resorts and on snorkelling trips. The matter-of-fact tones of our guides echo an acceptance of this turbulent past, a period much rather forgotten by many modern Fijians. Our third day ends in the very settlement that demanded the reverend’s death, Nubutautau. Climbing out of the valley, we settle into a village nestled in gentle rolling hills and a not so gentle past.

I spend the night by the kava bowl once more, but this time the story telling is sombre. The repercussions of Baker’s murder were felt generations down the line, with the heavily Christian village seeking redemption from their ancestors’ sins. Years on, formal apologies have been acknowledged and bridges been built as Nubutautau accepts their place in Fiji’s history. And just as the locals have moved on from the shadows of their past, so do we venture out from under the shelter of the village come sunrise. 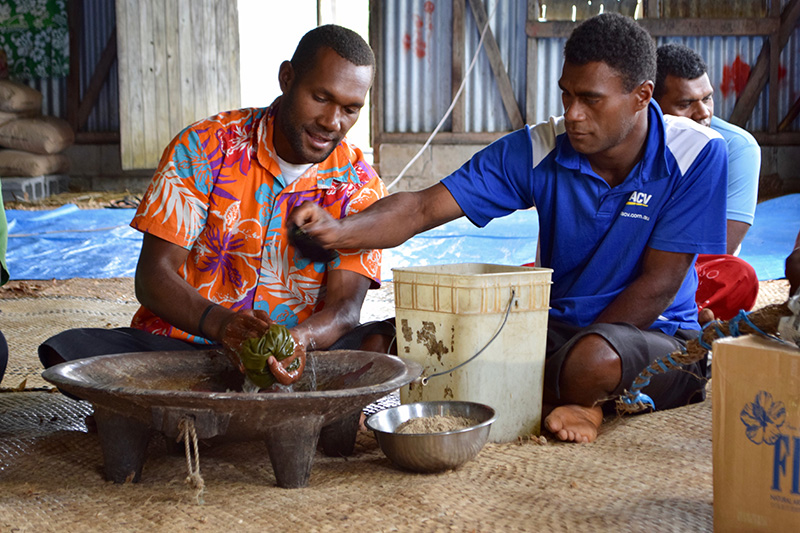 This trek is the longest of all, and over a wide range of terrain. Hiking 21 kilometres through the hills of the Navosa province, we switch to following the Ba River, which will lead us to our final destination of Navala.

Volcanic rock formations and sandy riverbanks are the backdrop to our walk, as we rock-hop most of the way, eventually climbing out of the valley on sweaty, weary legs.

Our final night and day is spent trekking nowhere except through time, in the traditional Fijian village of Navala. Known as the last authentic village remaining, Navala allows us to rest our bodies and utilize our imaginations as we are shown the graves of chiefs and the foundations of mighty bures, the traditional thatched Fijian homes.

Remnants of tribal warfare and a nomadic lifestyle are evident through all five days of trekking, making the contrast with today’s idyllic Fiji and friendly Fijians all the more interesting. Re-inspired, I would return to the city throes from a worthy trip beyond the beaches and into the slightly less refined but wholly more rewarding Fiji on foot.• 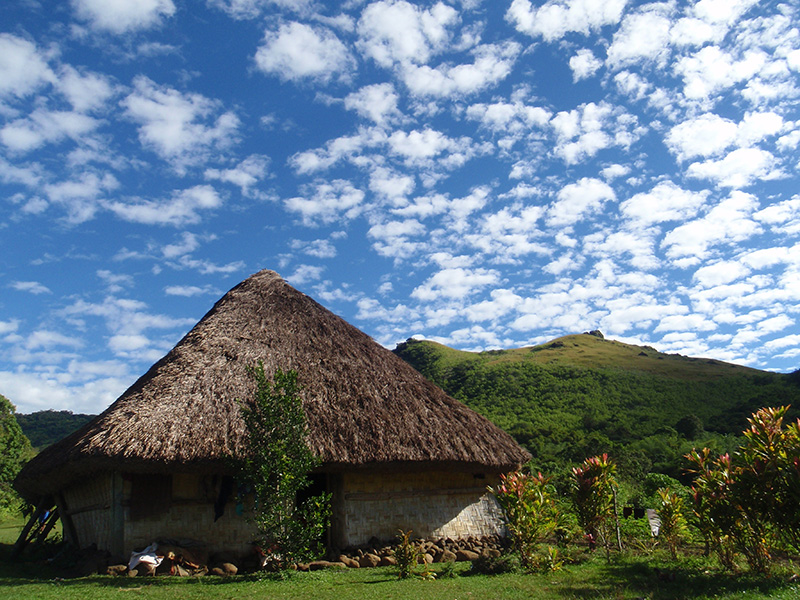 Getting around
Talanoa Treks arranges all transport during the hike and can provide pick-ups and transfers from most places on Viti Levu. +679/998-0560; talanoa-treks-fiji.com

When to go
From April to November is dry season, though light showers aren’t uncommon. Talanoa Treks schedules trips so it is essential to book prior to arrival.

Where to stay
To minimise the amount of travel, accommodation in Suva city or on the Suncoast is advisable as the hikes go inland from these points.