A century after finding their patch of paradise on the island of Ghizo, Jennifer Berry returns to the Solomon Islands to retrace her British family’s heritage and to sample the Solomon Islands’ iridescent waters and tropical splendour. 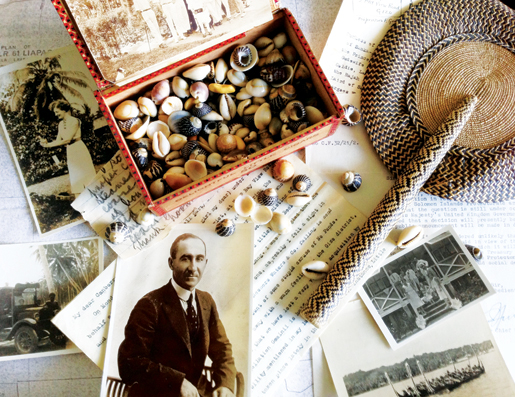 It wasn’t the tales of fierce warriors, wild ceremonial dances and seafaring villagers in dugout canoes that brought me back to Gizo. Or the October trade winds rustling through swaying coconut palms. Even the corroded World War II relics that lay dormant, deep in the shadows of the island’s turquoise waters. It was the discovery of my British grandfather’s war journal that enticed me to journey back in time to when copra was king and the old Empire clung to its crown jewels amid faded glory, tropical garden parties and a cool glass of gin.

To some they were halcyon days, the last days of paradise before the Japanese launched their airborne and naval assault on the Solomons in 1942. But to my family, it was their way of life – and a chance to shoot out from obscurity and inhale the heady scent of dried coconut kernels and makeshift grandeur. Purchasing the first of several copra plantations on neighbouring Simbo in 1911 before buying land on Liapara and Vella Lavella in the Western Province, they also built a general store at No 2 Gizo Road, near Gizo’s present day wharf.

Bathed in British nostalgia, the quiet rhythms of island life centred on overseeing and exporting the production of copra, operating the store – which became a hotspot during the evacuation of Gizo in January 1942 after Tulagi was attacked by Japanese forces and neighbouring Keita had fallen – and in a moment of downtime, sitting in high-back wicker chairs spread out on adjoining lawns or in the afternoon shade on the patio. Here men’s tobacco pipes would fire up, tea cups clattered and politics of the day would be argued – the mounting tensions in Europe; the declining price of copra – and feminine chatter recalled a dashing young Errol Flynn, who chartered a schooner around the islands and left in his wake a swoon of broken hearts and unpaid debts – my family included.

Although those days are now gone and only live on in patchwork diaries and faded photographs, there’s magic conjured up when titillating narratives are woven into Gizo’s history, the Solomon Islands’ second largest town and the Western province’s pivotal hub. 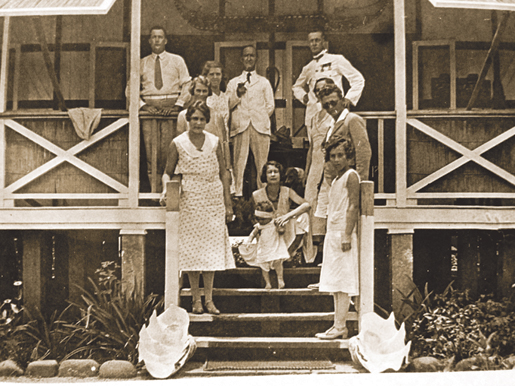 Located east of New Guinea amid a far-flung archipelago of exotic atolls, jagged reefs and sandy beaches, Gizo started as a backwater paradise – a raw and a uncivilised one, to be sure, but a South Seas paradise nevertheless, mainly attracting itinerant wayfarers and colonialists.

First came the European explorers before the British traders who arrogantly claimed the islands as their own, for King and country. Then in 1927, the region trembled between beauty and brutality when the confiscation of British guns and the collection taxes triggered the 1927 Kwaio in Malatia. It was this rebellion more than the islanders’ legacy of tribal headhunting and cannibalism that gave the Solomons its unruly reputation.

Yet Ghizo – named for a legendary headhunter – has long been steeped in fierce legends and rich Melanesian culture where trade centred on seafood, shells, yams and taro. As I walk along Gizo’s present day wharf – an artery of colourful marketplaces and a sputter of motorised canoes – I discover the essence of island life has changed very little. Fused with the frenetic sound of Pidgin at betel nut stalls and the sweet pungent scent of frangipani, steaming clams and fermented fruit, I feel a sense of familiarity here as dogs smooch around rattan mats and children weave in and behind a cluster of old toothless women selling bananas and ripened paw-paw, each sporting blood-red smiles from the unremitting chewing of the wad of betel plants.

A break in the squadron of stalls leads me overlooking the waterfront where nostalgia comes easily beyond the shoreline and breakaway islands abound by the hundreds in these waters.

Near to where the present day airport lies on a nearby atoll, steam-powered clippers once anchored and rickety bi-planes – an anomaly to many at that time – swooped in and touched down in the saltwater lagoon, bringing much-welcomed mail, goods and missionaries preaching God. 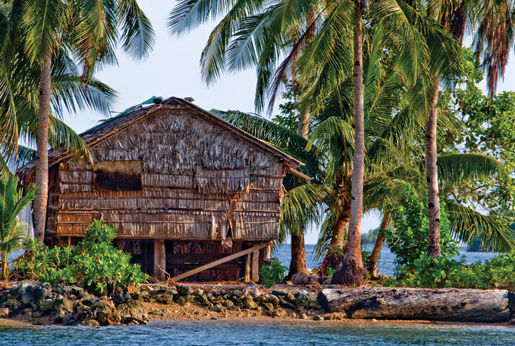 Back then, few things would inflame the imagination than sacrificial festivals and ceremonial dances with fierce-looking warriors adorned in palm-frond skirts, shell-beads and dolphin teeth; each stomping their rhythmical feet while brandishing hand-carved shields, seed hand rattles and intimidating spears that were blessed by a tabu marker with the power to find their mark.

Like many of the easy-going locals I get to know, their demeanour thinly veils an intense pride in their ancestry, and of the ancestral ghosts that gave their chiefs and warriors untold powers. At least, that is how it lives in my family’s memories.

There are many new eco-lodges that have returned to the Western Province’s grass roots along the shorelines – Fatboys on Ghizo, Sanbis Resort at Mbabanga Island and further afield, Uepi Resort at Marovo Lagoon, now nominated as a World Heritage-listed site. But it is at the Gizo Hotel which sits on the fringe of the town’s harbour where I take refuge in its open-air Leaf Haus Bar overlooking the water – a view reminiscent of my grandparents’ lost world. It’s easy to pass time here. Hours drift by unnoticed and the cycle of sun and rain fuse one moment into the next. But before I can unwind, a tropical downpour begins to drown out the conversation I find myself drawn to – another part of the island’s history I have not experienced.

On Ghizo, it is the surrounding waters that dominates the rhythms of island life. After lunch and on island time, just as the tide pulls back to reveal shimmering white sand and sun-bleached sea shells, I meet David Alasa’a on nearby Kohinggo Island. David leads me up a sleepy jungle track to view a U.S. Sherman tank, one of the many Allied and Japanese relics that lie in an entangled canopy across the archipelago.

But as the imprint of WWII fades, the thrill of coming nose-to-nose with sunken ships, submarines and planes from the Solomons’ theatre of war has turned the Western Province into a ribbon of dive sites.

The coral cays that encircle the many outer islands off Ghizo are popular hotspots for low-impact deep sea diving and snorkelling, protected zones that take me amongst exotic marine life, light-filtered caverns and colourful reefs that turn the waters into a riot of psychedelic hues. On this particular afternoon I come upon a group of manta rays, turtles and a remarkably intact American Hellcat fighter plane, not far from where small children paddle near the shores in dugout canoes. 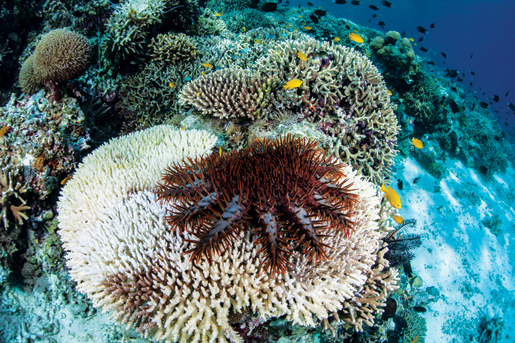 It is the relic of the Toa Maru, a Japanese transport ship with some of its cargo still aboard along with a Japanese Zero that I’ve come to see – fighter planes that once released bombs near my grandfather’s boat in his quest to escape after he and two men destroyed the last remaining petrol supplies and copra sheds along Gizo’s wharf; an explosion that rose and lit up the night sky.

On Vella Lavella, I am alone in this wild spot but it’s far from silent. A warm breeze rattles the palms. A red-tail tropic bird calls out from a banana tree. And the trail I am searching for that would lead me to one of my grandfather’s plantations is lost to another time. Before the tourists came – long before the Japanese invaders and British colonialists. I begin to feel as if something is calling me. It is of a paradise lost, something wild and beautiful that cannot be put into the palm of my hand.

It is the ghosts of past chiefs. And with that, I pay my respects and walk on. • 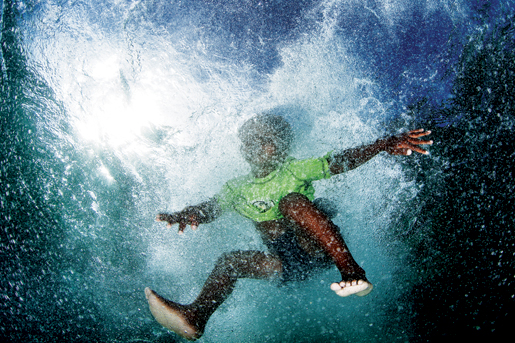