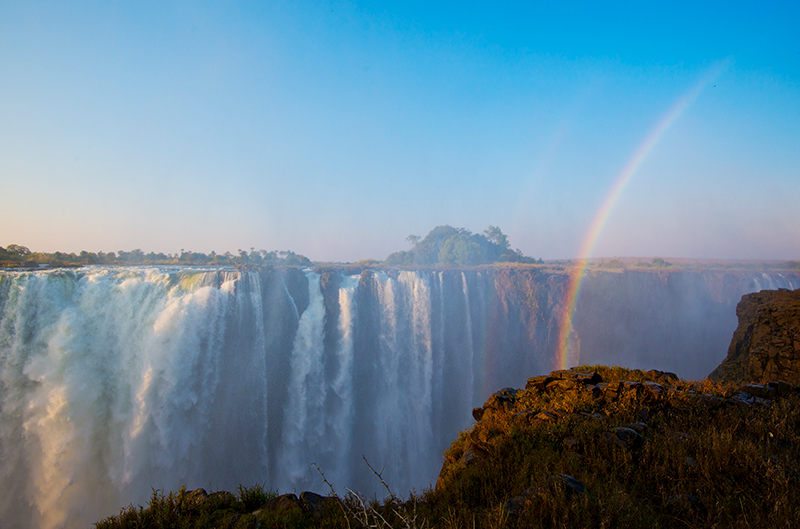 When it comes to the world’s great waterfalls, the big three are Victoria Falls, Iguazu Falls and Niagara Falls. In full flood, the huge volume of water falling into a narrow ravine to create Victoria Falls sends up a spray that can be seen from kilometres away. That’s why locals call it Mosi-oa-Tunya or “the smoke that thunders”. Just about everyone else simply refers to it as “Vic Falls”.

David Livingstone, the first European to see it in 1855, waxed lyrical writing: “scenes so lovely must have been gazed upon by angels in their flight”. The setting is certainly unique: the mighty Zambezi River pours into one side of a chasm to create the world’s largest waterfall – 1.7 kilometres wide and more than 100 metres deep. It’s a worthy World Heritage site.

The natural configuration of the falls is perfect for viewing them from the Zimbabwean side. Almost level with the top of the drop you join a cliff-top path with numerous viewpoints across to the endless torrent or down through the mist to the river far below. Those who have done their homework bring raincoats to ward off the spray and similar waterproofing for their cameras. Along the walk you may encounter monkeys and antelopes but, hopefully, not crocodiles.

The town of Vic Falls is largely a dusty tourist strip with lots of restaurants selling dishes prepared from just about every conceivable game animal. There’s a lush little craft market and several adventure tour offices. 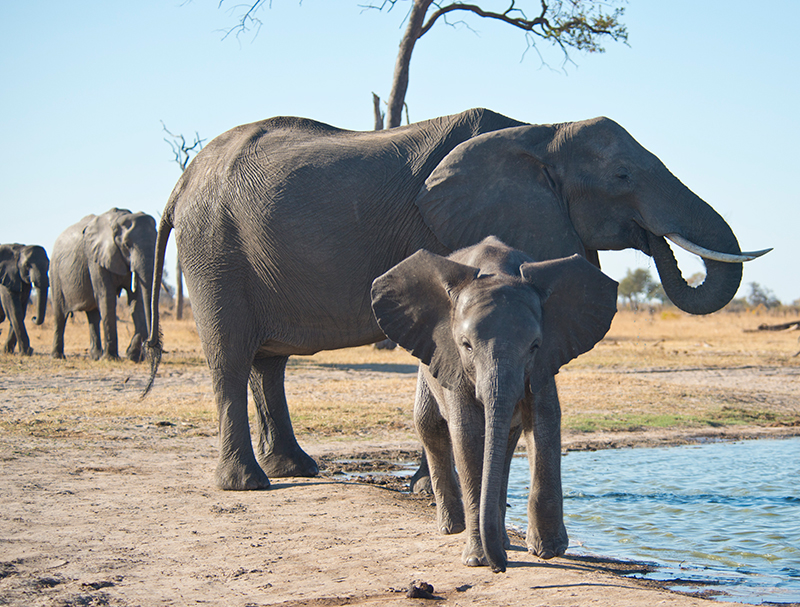 Over a few visits to Vic Falls I’ve utilised the services of Shearwater, a local adventure tour company, a few times. The first was a full day of white water rafting below the falls.
It was the single most exhilarating and terrifying experience of my life. Even Nepal’s Trisuli River pales by comparison: the Zambezi throws up standing waves several storeys high. You can also bungee jump from the middle of the bridge crossing the gorge – or zipline it. How about trying crocodile cage diving? And if a helicopter fight over the falls (a recent highlight for me) is too tame, try doing it by microlight.

However, there’s one activity that tests your nerves more than any other and that’s a swim in Devil’s Pool. It’s only possible at low water when the flow over the ledge is somewhat reduced. You are taken out to Livingstone Island, in the middle of the falls and wade into a pool right on the edge. Any sudden surge of water or a wrong step would see you swept over the thin rock ledge into the maelstrom below. It’s the ultimate infinity pool. A long time afterwards I could still feel the pull of water trying to impel me to my doom. 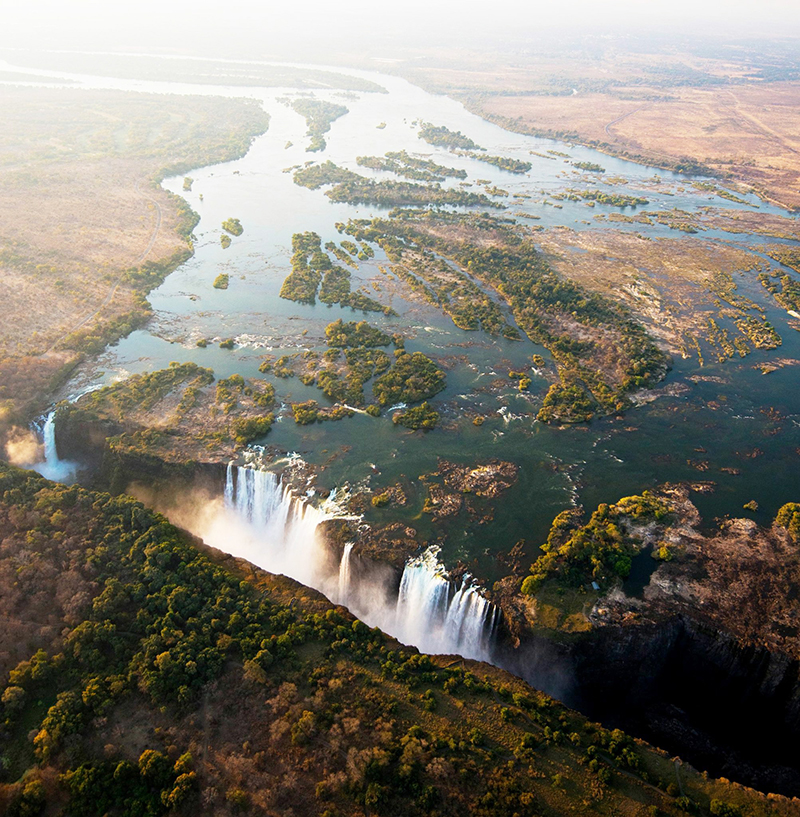 Many visitors to Vic Falls fly directly in and out – or cross the border to or from the Zambian city of Livingstone so, in many ways, it feels like an enclave removed from the rest of Zimbabwe. It feels safe (unless you’re in Devil’s Pool) and your main worry is being hassled by persistent hawkers flogging handicrafts.

There’s a wide range of accommodation here from luxury lodges to backpacker hostels. But the perfect place to stay is the Victoria Falls Hotel. It is a member of Leading Hotels of the World and reflects the same standards as the world’s other great hotels.

For a start, the setting can’t be surpassed. The grand old hotel’s formal gardens overlook the gorge directly below the falls – and there’s a private trail to the National Park and the brink of the chasm. From many rooms you can watch the sun rise through the mist above the falls. The sprawling white Edwardian edifice had an unlikely start in 1904 as accommodation for workers on Cecil Rhodes’ Cape Town to Cairo railway. However, the need for luxurious accommodation for visitors wishing to witness Livingstone’s wonderful discovery saw it grow to the historic beauty it is today. Charmingly, a troupe of mongoose roam the grounds and a resident family of warthogs have been the hotel’s lawn mowers for generations.

While Zimbabwe has been economically challenged recently, the Vic Falls Hotel has thrived. It was extensively redecorated in 2013 so the hotel remains grandly comfortable but there’s now excellent high speed internet throughout and the food is stylishly modern. Service from the doorman (who appears to remember everyone) to the managers is a brilliant blend of friendliness and professionalism. 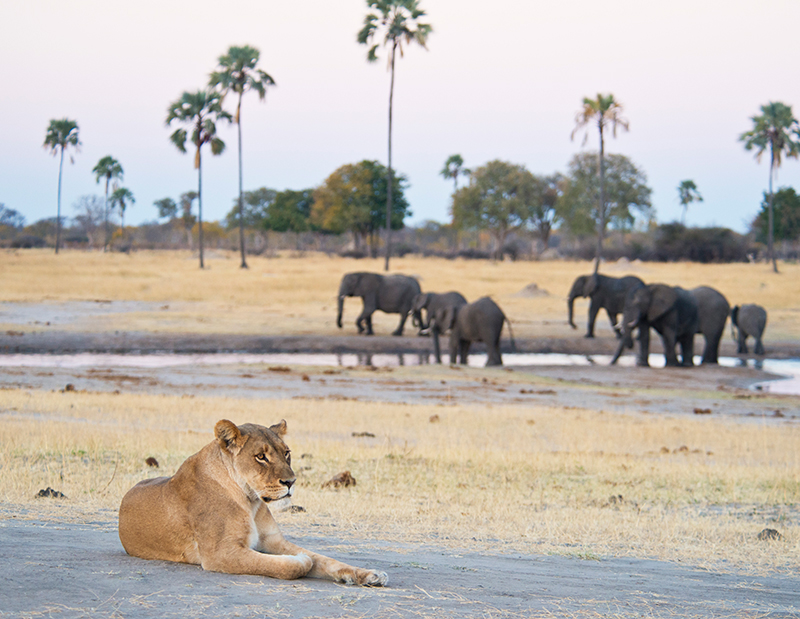 The first time I visited Zimbabwe was more than 20 years ago and, after the Falls visit we went camping in Hwange National Park. Our accommodation was a simple pup tent and jet-lag saw us sound asleep till well after dawn.

When we emerged that first morning we saw the fence nearby had been knocked down. There were elephant foot prints across the sand and on either side of our tent. While we’d slept, an elephant had walked over our tent and the one next door – the German couple inside emerged to see what the commotion was about – saw the footprint track and fled in their car minutes later.

This time on my return to Hwange, we stayed at Wilderness Safari’s Little Makalolo camp, an altogether more civilised way to experience game viewing. It has just six simple tents that are effectively en-suite rooms constructed from canvas on the company’s own private concession. So, on the morning and evening game drives you have the animals you find to yourselves. I saw little change in the animals in the park except we didn’t see any rhino and the number of elephants appears to have boomed.

One of the great features of Little Mak (as it’s inevitably called) is that the camp, from your room to the dining area and outdoor lounge, faces a waterhole that’s an essential stop for most wildlife during the dry season. One afternoon we had a beautiful sable antelope waiting his turn just off our balcony. 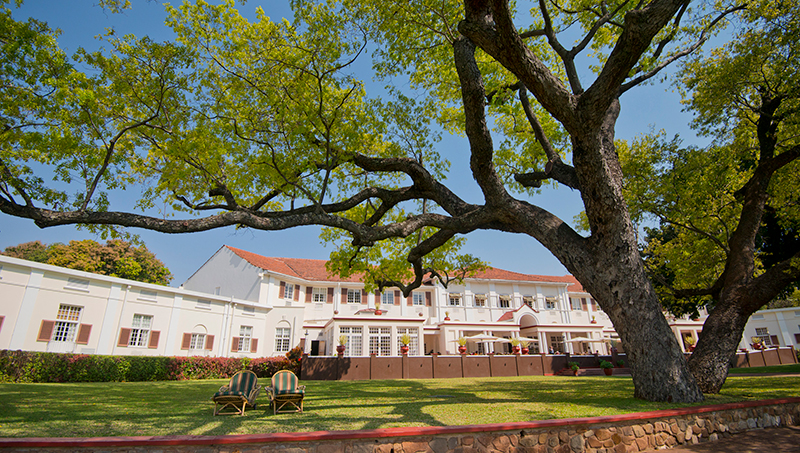 The lodge has a hide at the waterhole. With Hwange’s thirsty elephants the prime visitors, the structure made out of logs seems quite flimsy when an elephant family decides to mock fight almost over our heads. Being surrounded by the sheer bulk of more than 60 elephants is a memory that will stay with me forever.

Hwange was thrust into the world spotlight in 2015 when Cecil the lion was shot by an American bow hunter. Cecil, distinguished by his imposing dark mane, used to live around Little Mac but had been pushed out by two younger lions and that’s why he was on the photographic concession where he was killed.

That became very real history for us when we drove over a rise one morning to find a male lion striding towards us along the middle of the track. “King of the jungle” was put into perspective at that moment – this was a creature so dominant that he passed our open 4WD without a sideways glance but obviously aware of our admiration. He had a large black mane and our guide excitedly whispered to us that he was one of the lions that had supplanted Cecil. He certainly had an alpha male strut to his walk.

If you like animals you will love wildlife viewing in Africa. Combined with Victoria Falls, one of the world’s greatest natural wonders, it’s a great natural holiday. • 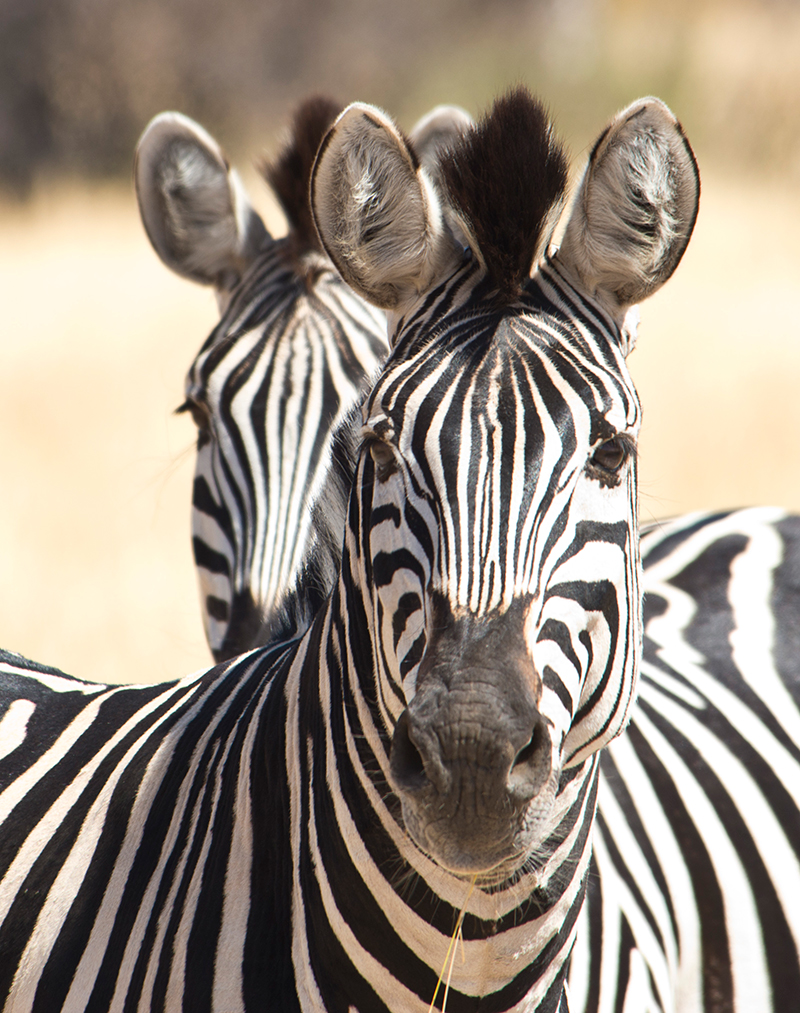 Getting there
Qantas flies from Sydney to Johannesburg where you can change aircraft and fly directly to Victoria Falls with South African Airways. The airport is about 20 kilometres from downtown Victoria Falls. qantas.com; flysaa.com

Getting around
In the game park you’ll be taken on guided game drives. In Victoria Falls the easiest way to get around is by taxi or on foot. If you need a transfer across to Zambia it can be organised through Shearwater. shearwatervictoriafalls.com

When to go
Towards the end of the dry season (August–October) there’s much less water over the falls so, while the visibility is better, the falls are less impressive. By the end of summer the flow is huge and you can be sure of being soaked.
Summer can be very hot, moderated by torrential downfalls generally in the afternoon. Game viewing is better in the dry season when the grass is sparser.

Visas
Australians can obtain a visa upon arrival in Zimbabwe. 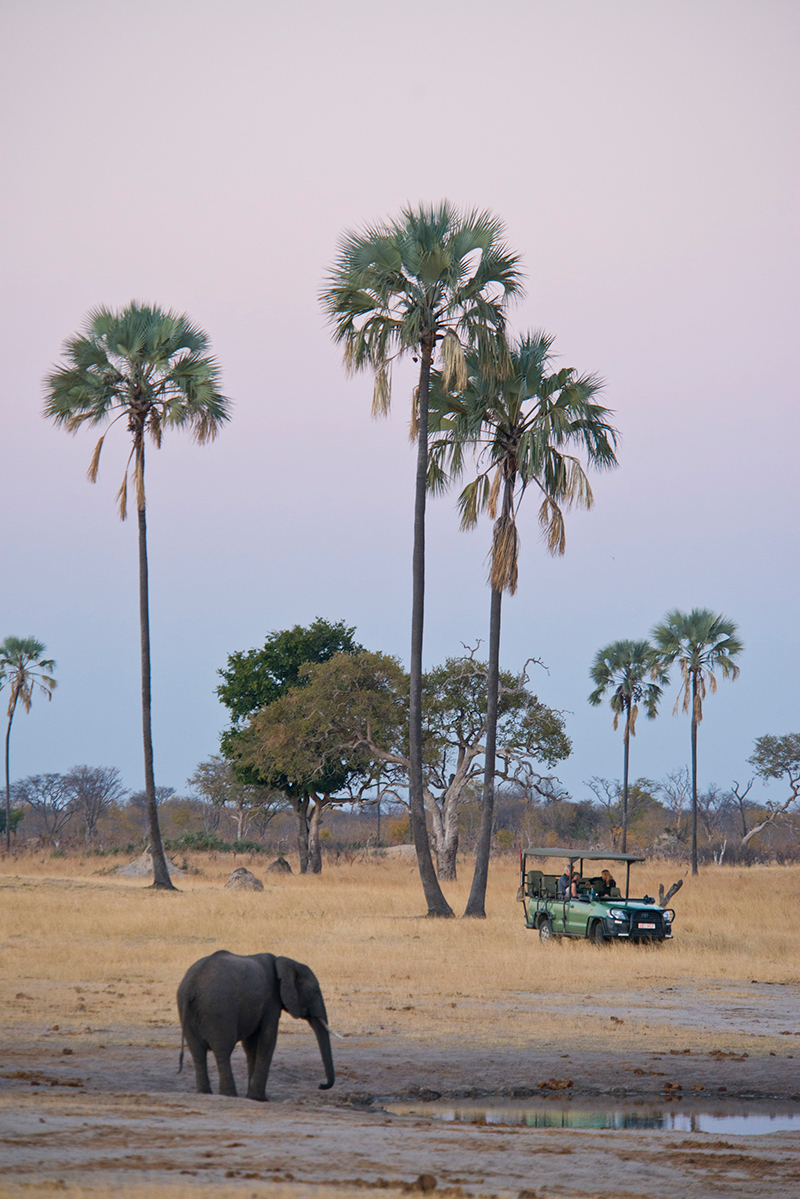