A century ago Australian soldiers were at war on the other side of the world, in places with unpronounceable names and enduring the unthinkable. Gallipoli has had its centenary, and in July 2016, we will commemorate the centenary of the battles at Fromelles and Pozières. A visit to these sacred grounds will live in your memory forever. 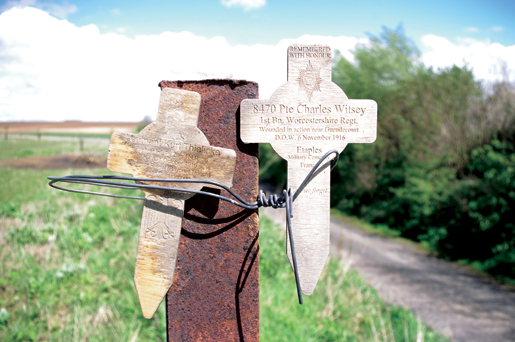 When I walked through the brass gates of AIF Grass Lane Cemetery, clasping my bag of dried gum leaves and a box of matches, the air was still and silent. Behind me, a line of battlefield visitors, my tour group keen to finish their 10-day Western Front tour with my little personal remembrance service, something I simply call “a leaf burning”.

AIF Grass Lane near Gueudecourt, France is one of 2,400 Commonwealth War Graves cemeteries across northern France and southern Belgium. In this particular part of the Somme, not far from the battlefields of Pozières, Bullecourt, Flers and Bapaume are many cemeteries where sadly, Australia is well represented. Beautifully maintained, they dominate the landscape in this area along the Somme and everywhere reminds us of the sacrifice and the deep sadness that still lingers in Australian families today.

I first came to this area in 1994. I had watched the moving telecast of the reinterment of the Unknown Soldier in the Hall of Remembrance at the Australian War Memorial in Canberra and feeling deeply affected, decided I must visit the battlefields. During a working stopover in London, I took the Friday night Calais ferry and at 8am the following morning was at the door of Avis. Armed with a guidebook to Australian areas of operation in France and Belgium and a couple of yellow Michelin maps, I raced around a number of battlefields hoping to understand and learn something over that short weekend.

Sadly this was not the case. All I saw were benign verdant fields of wheat and sugar beet, nothing to suggest a battlefield nor translate the stark black and white images of shattered landscapes, up-turned waggons and dead horses. I instantly realised two things; first, I needed to read and understand this complex history and second, I needed someone to show me where this terrible war actually played out. Little did I realise that I would become a ‘someone’; a Great War historian, writer and battlefield guide myself in the years to come. 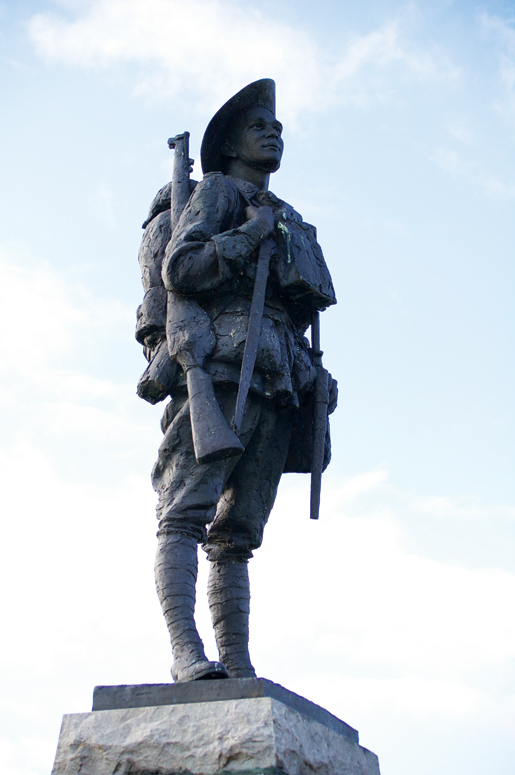 In 1998 I wrote a booklet and recorded a ‘radio play’ telling the story of the Battle of Hamel in July 1918 for the Department of Veterans Affairs. However, my big break into publishing came when a friend lent me a manuscript written in the late 1920s by his grandfather, Private Edward Lynch, a returned soldier. This heavy leather bound tome with Somme Mud etched in gold on the spine was the beginning of a new foray into the history of the Great War, first in editing and getting Somme Mud published, and then following this up with other books including In the Footsteps of Private Lynch, Beneath Hill 60 and The Boy Colonel, all through Random House. This took me to another level of understanding and respect, but also took me into the lives of three families whose soldier forebears I had written about and researched.

It also took me back to the killing grounds of France and Belgium, often alone with my research, but now more regularly as a battlefield historian and guide. I do two trips annually, visiting the major battlefields like Pozières and Mouquet Farm, Bullecourt and the outpost villages, Villers-Bretonneux, Le Hamel and the villages along the Somme, Messines, Ypres, the Menin Road, Polygon Wood, Zonnebeke and the villages on the road to Passchendaele. On this emotional journey we visit the massive Tyne Cot Cemetery, the largest British military cemetery in the world with 12,000 graves, a large proportion unknown.

As if to emphasise the brutality of the battle, the remains of three German blockhouses, captured by the Australians on 4 October, 1917; the centre one bearing the Cross of Sacrifice. Just south of Armentieres is the battlefield of Fromelles where 5,500 Australian casualties were inflicted in one night. Here the Cobbers Memorial reminds us of those fateful words spoken by a wounded digger to his rescuer mate; “Don’t forget me cobber”.

One great surprise with visitors to the Australian sectors is the small area of Australian responsibility at any one time in which all this fighting took place. In fact, while the frontline stretched from the Swiss border in the south, 720km to the North Sea coast, the British were responsible for about 80km (50 miles) while the French army defended the rest. While most of the worst fighting was in the top 150 kilometres, within this the Australians held very small sectors, in some places just a kilometre or two, in other places just a few hundred metres.

Gallipoli is even smaller. The Anzac sector is about 161 hectares and can be visited relatively easily in one day. Helles at the tip of the peninsula is also a must, as is the northern Suvla Bay area, so ideally you need three days on the peninsula. Tours run from Istanbul (it’s a four to five hour drive), Çanakkale and Eceabat are the closest towns to Anzac Cove. Çanakkale has the most accommodation but that requires a ferry trip across the Dardanelles. 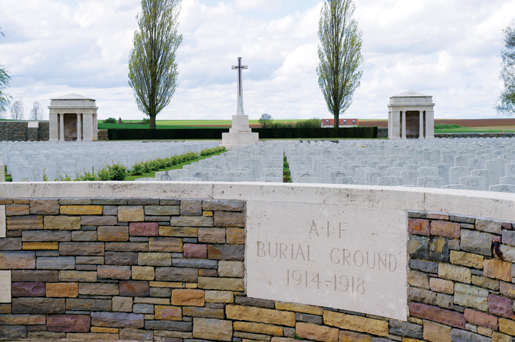 Yet Gallipoli is full of those mythical places, names we know so well: Anzac Cove, Shrapnel Gully, Lone Pine, Quinn’s Post and the Nek, that narrow strip of land as Charles Bean says, the ‘width of two tennis courts’, where the Light Horse were slaughtered in their futile charge in August 1915 and made famous in Peter Weir’s film Gallipoli. Across this desperate landscape are small cemeteries in green manicured lawns, a subtle Christian cross etched into the Memorial. Here too are the famous words of Kemal Ataturk; “You the Mothers who sent their sons from far away countries, wipe away your tears. Your sons are now lying in our bosom and are in peace. After having lost their lives on this land, they have become our sons as well”.

So, the ideal way to see and understand the battlefields is on a tour with a guide or historian, ideally an Australian if they are available. In France, take the train from Paris to Amiens (about 120km) where the guide can meet you at the station and use their own car or minibus for transport. Others start at Arras, a 50-minute train ride from Paris. Alternatively, hire a car at Amiens (not Paris Charles De Gaulle airport as this is very expensive) and with a battlefield guidebook (and suitable maps), you can do a self-drive tour. There are also some excellent day tours.

Accommodation is available in both B&B’s and a range of hotels. While the Somme and northern France has regional cuisine, this is hard to find without local knowledge so expect the usual steak and chips and a sharp red wine. In Ypres (Belgium), try the mushroom crepes and heavy beef stew and of course the beer and chocolates in the Market Square beside the Cloth Hall before heading to the nightly Menin Gate Ceremony at 8pm. The Menin Gates lists the names of 72,000 British Empire soldiers who died on the Ypres Salient and have no known grave including some 6,200 Australians.

Back in AIF Grass Lane all was silent and still, not a leaf moving on the trees that lined the central path. I turned off to the left, leaving a spring of gum leaves on the grave of an unknown Australian and walked to the wall. At the base of the wall was a narrow garden bed so I dug a shallow hole and placed a handful of gum leaves in the bottom. This ‘leaf burning’ replicates what the diggers would have done after they received a few precious leaves in the pages of their letters from home. I can see them, huddling in the bottom of a trench all sniffing the fragrant eucalyptus smoke as it smouldered and slowly burned. This was a very strong link with home – Australia was so far away and how their thoughts must have yearned for their families and their distant loved ones. 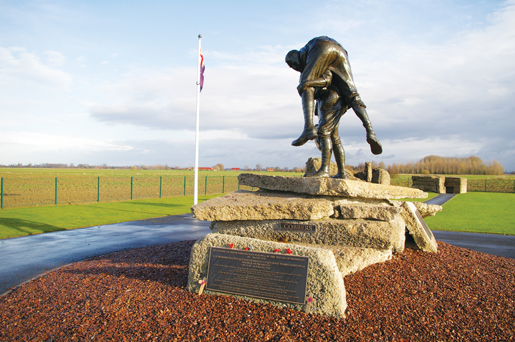 Calling the tour group to me, they huddled around and watched as the leaves were lit by a woman whose grandfather was in the Great War. Immediately a wind came up. A strong gust took the smoke diagonally across the graves and out into the old battlefield beyond. Quickly the leaves burnt and smouldered and as they did, the wind dropped, then stopped. As we all passed back through the cemetery gates, the air was again silent and still. People looked at each other, wiping away the tears that were streaming down their faces, surprised and moved by what they had just seen and wondering about the phenomena they had just witnessed.

The battlefields have a lot to offer the traveller, not the least the chance to remember our dead and honour them with our presence. I am sure our boys in their cold lonely graves, so far from home and rarely visited, appreciate the visit and the smell of the Australian bush.

Will Davies has written four books – Somme Mud, In the Footsteps of Private Lynch, Beneath Hill 60 (a major movie brought this to life) and The Boy Colonel on the Great War. He is a respected historian, and leads tours for Mat McLachlan Battlefield Tours, one for Anzac Day with the Dawn Service at the National Memorial at Villers-Bretonneux and another in July for the anniversaries of the Battles of Fromelles (19 July) and Pozières (23 July). 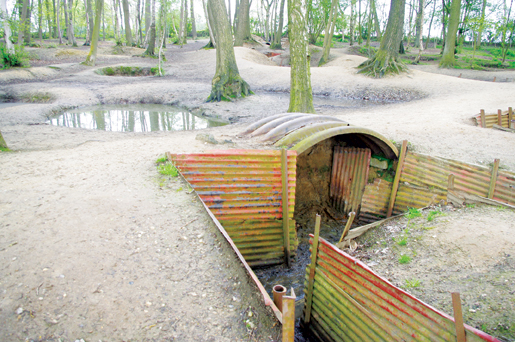 Access to the battlefields is easy. Amiens is about 120km north of Paris with train services to Amiens and Lille as starting points. A hire car or mini-bus with a guide is essential as there is no local transport to the remote battlefield sites. Bikes can be hired with the riding generally over flat or slightly hilly terrain.

The best time to go is in summer (June–August) but this is also the busiest time in Europe. Spring is good (April–May) as the ground is free of crops and easier to understand terrain and ‘mud’. Going to the Dawn Service in Gallipoli is special, but some prefer to go when it is not so busy, to really soak up the extraordinary emotions that stir here.

There are a number of battlefield tour companies and this is a great way to do it. There are also experienced tour guides on the battlefield like John Anderson (Longueval) and Peter Smith (Flers) who are very familiar with Australian areas of operation.
•    Battle Tours and Historical Travel have tours from one to 28 days in length at all major battle sites: 1300-768-478; battletours.com.au
•    Sacred Ground Tours conduct day tours from Arras to The Somme and Fromelles –Ypres, and in 2016 are offering a new tour for cruise ship visitors from Le Harve: 33-06/7566-5902; sacredgroundtours.com.au
•    Mat McLachlan Battlefield Tours offer multi-day comprehensive group tours to the major sites or can custom-make an itinerary: 1300-880-340; battlefields.com.au