Known predominantly for the discovery of coffee in the 11th century, its ancient civilisation, the source of The Blue Nile and of course long distance runners, Ethiopia, a landlocked country in northern Africa, is still surrounded by a degree of mystery.

An unusual and exotic destination, it’s a country with one of the richest histories on the African continent. Ethiopia is full of remote and wild places with cultures descended from some of the world’s oldest civilisations.

This is a land of origins, the cradle of humanity, where we first meet ‘Lucy’, whose bone fossils date back a mere 3.2 million years. Under the slogan ‘United Ethiopia’, a hundred million people with 80 different languages and a variety of religions are all equal under the constitution. And that’s how it feels when you’re there. Peaceful and united.

The country has stabilised over the last 20 years. Most kids are in schools, health clinics are prominent and the government subsidises mobile phones. Just about everyone has one.

Most of the best tourist destinations can be reached by road or air and for the last few years, tourism has been a priority. Here are our suggestions for the best places to visit. 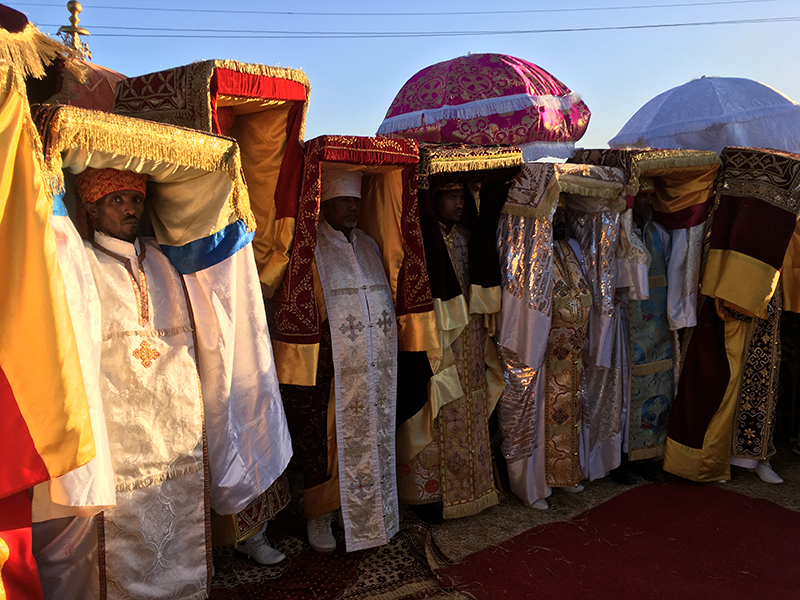 With dancing, chanting and happy chatter, I was quickly swept up in the annual celebration of Timkat, the Ethiopian Epiphany. On 19 January every year, pretty much the entire country gets involved in this three-day event to commemorate the baptism of Jesus in the River Jordan. Tourists are drawn to Gondar, Lalibela or, where I went, the capital Addis Ababa, where Timkat is most prominent. Hundreds of priests of all shapes and sizes dress in elaborate gowns, home embroidered in gold, white, red and blue and mill around amongst beating drums, ringing bells and soaring trumpets before the major ceremony of the blessing of the water by the high priest.

Onlookers dress in light wrap-around shawls hoping desperately to be sprayed with holy water. This spiritual and emotional festival is unlike any other – the colours, the people, the devotion and the sound of the trilling ululation will stay with me forever. 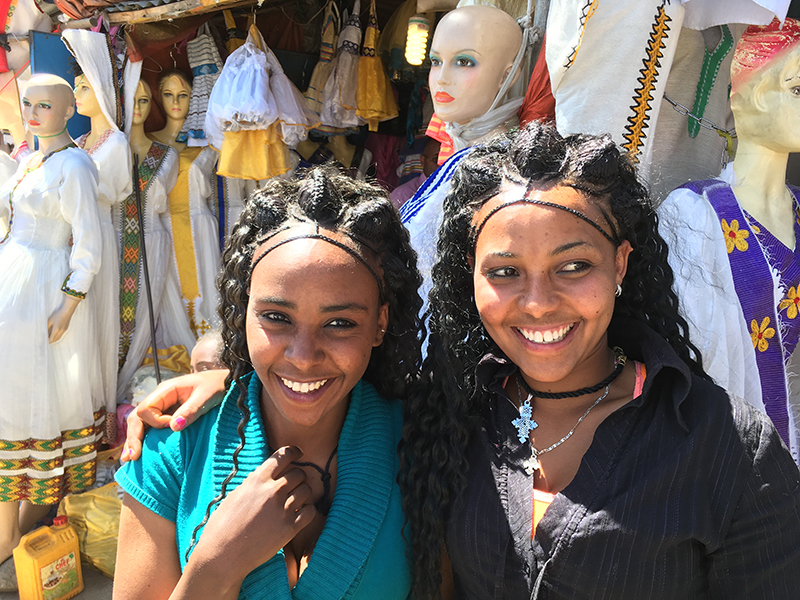 I can smell coffee as we drive from Bole Airport to our city hotel. I video the journey after pinching myself. I was in the capital of Ethiopia where no-one I know has ever been. Scaffolding is everywhere, spider webbed across one or two buildings in every block, a sign of how quickly the city is progressing. This is due partly to diasporas, living mostly in America, investing in their homeland. The tourism plan is to be in the top five African countries to visit by 2025. This sprawling capital of seven million, with 120 foreign embassies, is in the highlands bordering the Great Rift Valley. As the country’s commercial and cultural hub, The National Museum, where a guide is needed to explain the exhibits, houses Ethiopian art, traditional crafts and prehistoric fossils, including a replica of the famous early hominid, ‘Lucy’.

The copper-domed Holy Trinity Cathedral is a neo-baroque architectural landmark and to get there, or anywhere in town for that matter, try one of the blue and white bajajs, similar to tuk tuks, that scoot passengers around for a couple of birr, way less than a dollar. While sections of Addis are somewhat rundown, the newer areas include smart shopping centres and top quality hotels. 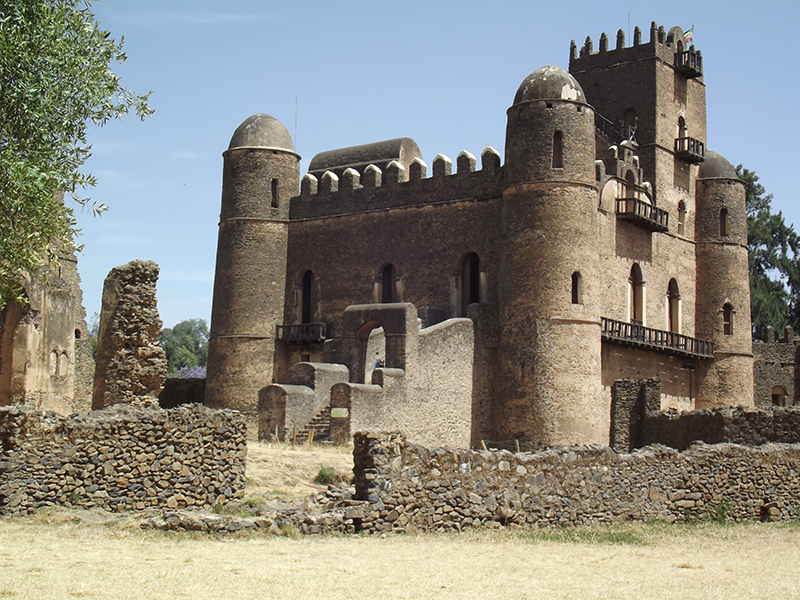 Gondar is an ancient city once home to emperors and princesses. Its multi-faceted royal compound, dubbed the ‘Ethiopian Camelot’, is an impressive complex of castles on seven hectares just aching to be explored.

And then it hits you. Simien National Park. Undoubtedly one of the most spectacular landscapes in the world, with jagged mountain peaks, deep valleys and sharp precipices dropping up to 1,500 metres. 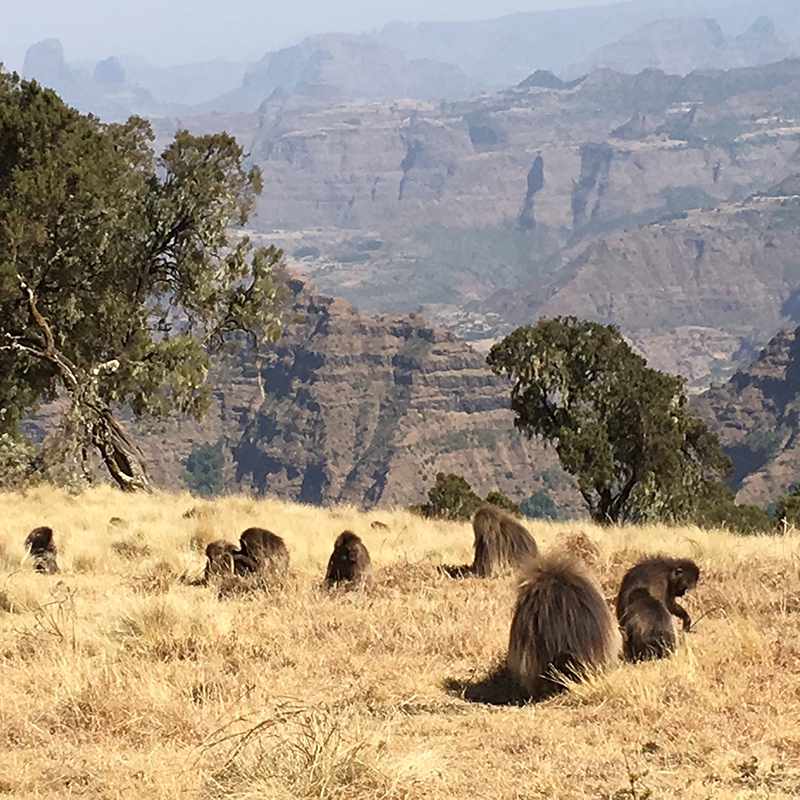 Will we see the resident, vegetarian Gelada baboons? On our four-kilometre trek, we’re up close and personal with a group of 100 or more who, apart from frisky babies showing off, barely bother to look up from their frantic eating spree. I’d suggest staying overnight at the thatched, stone Simien Lodge and enjoying a drink at Africa’s highest bar at 3,260 metres above sea level. 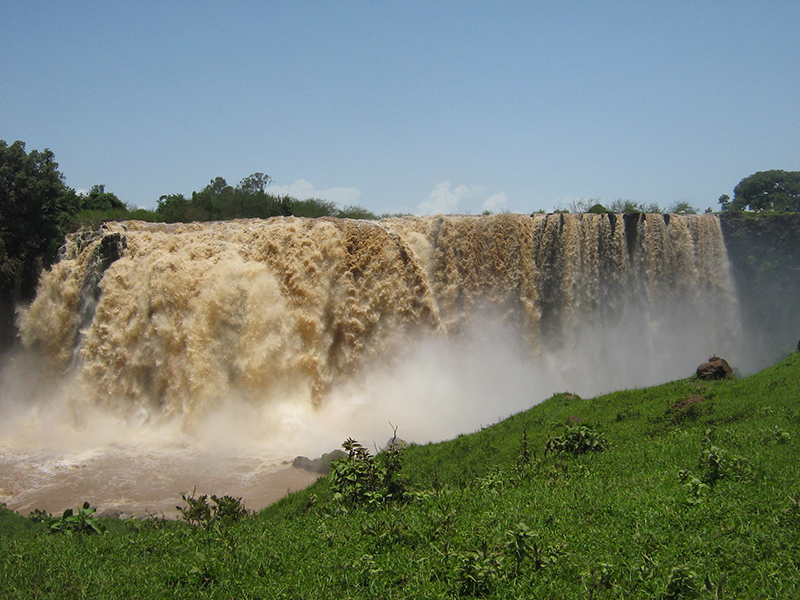 Bahir Dar is one of the leading tourist destinations because of Lake Tana, the source of the Blue Nile River which flows north through Sudan and Egypt to the Mediterranean. The city’s wide avenues are lined with palm trees and flowers and are a refreshing change to busy Addis. From our lakeside Avanti Blue Nile Hotel, we head across Ethiopia’s largest lake in a modern launch, to one of 20 centuries-old monasteries full of paintings and treasures. The sheer beauty of the artefacts took some pain out of the fact that we wouldn’t be visiting
the Blue Nile Falls. 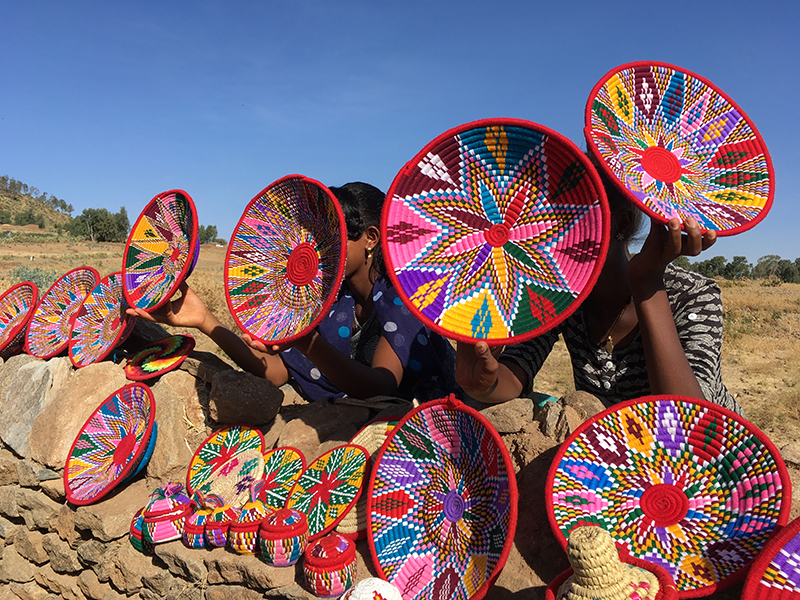 The ruins of 3,000-year-old Aksum with monolithic obelisks, royal tombs and castles dating back to the reign of the Queen of Sheba, are found close to the northern border. These mark the heart of ancient Ethiopia where the Kingdom of Aksum was the most powerful state between the Eastern Roman Empire and Persia. But that ain’t all. The 4th century church
of Tsion Maryam is where the Temple of the Tablet reputedly houses the original Biblical Ark of the Covenant, the holiest of Old Testament artefacts. No-one’s ever seen it which of course doesn’t matter in the scheme of things. What you can see though is all manner of priceless artefacts in the very modest looking museum; emperors’ thrones, Timkat umbrellas, bejewelled royal crowns, silver and gold crosses – worth hundreds of millions of dollars.

I’ve liked all the accommodation on the trip but the new Sabean Hotel on the main street in Aksum is probably my favourite, mainly because it’s in the thick of the activity.
I asked for a front room overlooking the street where movement never stops but is rarely frantic. Walk either side of the entrance to loads of shops full of trinkets, jewellery, carpets, multi-coloured straw bowls and the obligatory replica of a red and gold Timkat umbrella. How could I resist? 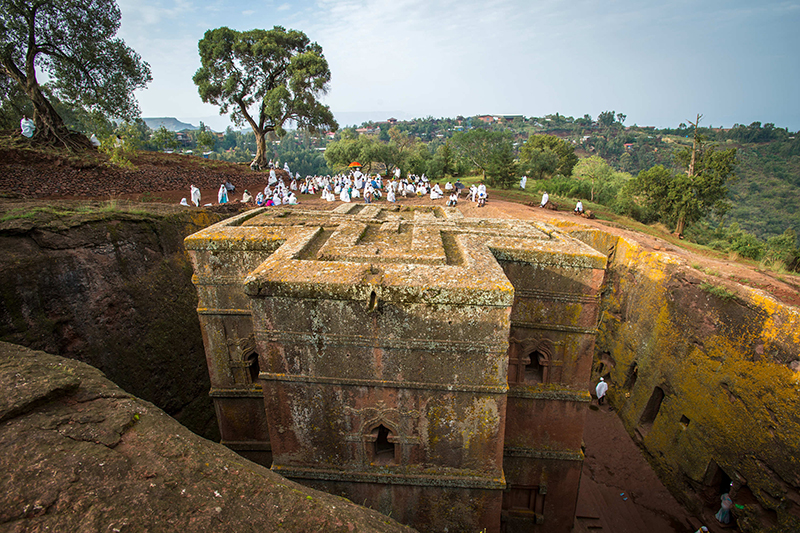 Lalibela is a town in the Amhara Region, famous for its monolithic rock-hewn churches. One of Ethiopia’s holiest cities, the layout and names of the major buildings are deemed to be a symbolic representation of Jerusalem and whether religious or not, these 11 churches are why Lalibela is on top of the tourist list. There’s some rigorous climbing involved up steep stairs and through a black, short tunnel called ‘hell’ but locals are on hand to assist.

They also make sure your shoes, which must be removed in each church, aren’t lost. Leave the best till last they say. The most spectacular is Bet Giyorgis (St George) and is one of the world’s most astounding sacred sites, carved entirely out of a single block of granite with its roof at ground level.

Memories of Ethiopia and everything I experienced there will never fade, and hopefully, nor will the colour in my Timkat umbrella. • 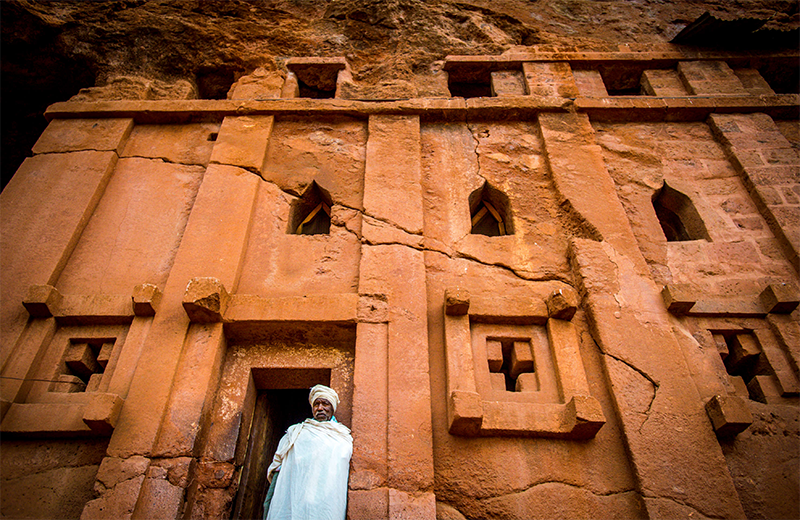 Getting there
Connect with Ethiopian Airlines in Bangkok, Manila, Hong Kong or Singapore (starting 1 June 2017) for flights to Addis Ababa. Ethiopian Airlines is the fastest growing airline in Africa and has its own aviation academy. ethiopianairlines.com

When to go
Tourist high season is from September to April. Timkat starts 19 January each year.

Visas
Arrange beforehand with Ethiopian Embassy in Canberra or obtain on arrival at Bole International Airport in Addis Ababa.