Aqua seas and jade verdure, they’re all we really want. State-of-the-art things, like phantom drones and molecular gastronomic creations, detract from the state-of-mind discovered in the raw glory of an unbuttoned coconut. For us, life must be tropical, sooner or later. Add jungles and glacier peaks and we would only be in one place on Earth: Colombia’s Sierra Nevada de Santa Marta, an isolated mountain range where snow white crowns tropical green and slips marvellously into Caribbean blue.

Sometimes the most beautiful places, like hearts, palaces and the Sierra Nevada, are scenes of the most violent hours. Up until a decade ago, military, paramilitary and guerilla forces fought in gruesome triangular battles over land, drugs, money and power. The natives suffered before that at the hands of the Spanish. But peace has since emerged strong here and the time forbids such misery. All that’s left of the fighting are the things that don’t change: mountain and sea.

The Sierra Nevada de Santa Marta is the tallest coastal mountain range in the world, separated from the continental Andes by the Rio César valley. Its steepest wedge rises from sea-level to over 19,000 feet in 28 miles, a gradient eclipsed only by the Himalayas. When the sky is clear, you can bathe in the Caribbean and gaze at snow-capped peaks.

From the seaport city of Santa Marta and the Taganga backpacker dive, cactaceous tierra is lushly refined in less than the hour it takes to reach Tayrona National Park, a beautiful natural playground and the first major stop on the Sierra Nevada de Santa Marta coastal range stretch. It’s an area of rolling green heaven and pristine waters – of seascapes, starscapes and escapes – of glittering pillowy beaches where heart and feet alight in the gentlest mobility.

Colombia is the most ecologically diverse country on Earth, and wildlife teems in the park. There are 400 species of fish, 300 types of birds, 30 reptiles, and 100 species of mammals, including howler monkeys, margays, beach deer, and armadillos. Cloud forests engage the mornings on hills above seagrass meadows. Ancient paths wind diversely through dry and humid tropical forests, past smooth boulders and buttress roots of Amazonian trees. From Cabo San Juan de Guía, Colombia’s most beautiful beach, Pueblito archeological village lies a scenic hour and a half’s walk inland. Like many other areas of the Andean and Amazonian continent, Tayrona has a rich indigenous history charged with spirit, craft, myth and fantasy.

During his Colombian excursions, author Charles Nicholl wrote: “Anyone who has ventured much into South America will know the feeling that there is another pulse, another country, just beneath and below the surface.” There are pockets of timelessness in South America but few of them preserve the fiercely humble indigenous soul like the Sierra.

Meeting the Tayrona
The Tayrona were the original inhabitants of the Sierra, peoples who flourished on the coast before Spanish imperialists arrived in the 16th century. Primarily famers, the Tayrona grew maize, yucca, beans, and other staples on sublime terraces and irrigated fields; they kept honey bees, chewed coca and drank chicha, the ubiquitous fermented maize drink still brewed in the continent. They spun and wore cotton; fished for snapper, tuna and ojo gordo in the Caribbean.

And gold. Spanish colonists were obsessed with Tayrona masterwork, depicted in elaborate articles – shamans and warriors posing in headdresses, ghastly humanoids sharing totem qualities with crocodiles, foxes, bats. But the most significant totem was the jaguar, and some tribes still dedicate their ceremonial houses to Cashinducua, a jaguar-god. The Spanish traded everything they had for Tayrona gold: wine and gunpowder, combs, beads, knives and other tools. Gold had no intrinsic value to the Tayrona; its glossiness mirrored the Sun God and spiritual and folkloric significance was thereby forged in it. Some of the sexual and seemingly ungodly golden depictions insulted prudish Spanish, and the opportunity to ‘cleanse’ and dominate led to skirmishes and bitter warfare in the Sierra’s foothills.

A final act of attrition in 1599 killed or forced the Tayrona into baptism and slave-labour in Spanish encomiendas. Nature, waiting outside man’s follies, swallowed the temples and intricate jungle pathways connecting the villages. Only few would be rediscovered centuries later. Despite this ragged imperialism, Tayrona descendants nevertheless emerged.

Today, the Coguis, Arhuacos and Arsarios move in and out of modern time. Formerly isolationist, the Coguis especially, clad in hand-spun cotton and long black mane, merge delicately with tourists and mestizos on vacant beaches and pueblos, where they trade organic goods for tools and gear. They descend the mountains in the morning, buying (and smelling) soap and other products; and some men have a beer next to speakers blaring wild-accordion vallenato tunes in extraordinary visual scenes. A plastic-less peoples, the Coguis impress a refreshing peace on those who meet their mysteriously pragmatic, sable eyes. Talking to them is like entering Tolkien’s ‘Middle Earth’. Families are breathtakingly young, faces pure and the warring long over.

Coguis live in the Sierra’s exquisite green banks and folds about 1,000m above sea-level, where the earth, flora and streams provide everything they need for subsistence. Despite dwarfish heights, they call modern man ‘Little Brother,’ because their ancient practices have been the means to today’s ecological and spiritual resolutions.

Some lowland people have ascended and descended with Cogui wisdom. They go up wearing civvies and come down gleaming in organic white. If you visit Playa la Roca, just west of Palomino – a beach that prehistorically recalls the Flintstones cartoon (as giant pelicans swoop piping waves, white eagles soar above twisting palms and a giant rock steps into the sea) – you’ll find a svelte pale man in white, looking like a Colombian-Cogui wizard. It’s Hatti.

Hatti spent 35 years with the Coguis, raising a family and learning the essential skills of handmade indigenous life: how to weave clothes, farm fruits and vegetables, shape organic materials, chew coca leaves and chill-out like a sage in a hammock. The threads he wears were spun himself, every elegant knot in his family-run eco-hotel he cut and tied, every cabaña and tile mosaic he designed. Playa la Roca, like Casalina a minute’s stroll east, is a collection of cabañas peppering lush fruit and flower gardens on the palm-studded sea. It’s eco-chic at its most harmonious. I ditched my bags in my cabaña, hypnotically lost to the peacock blue sea and prepared to stay a while.

‘Registration’ with Hatti came with warm eyes and handshake. His cheekbones rest high, eyes open wide aside a noble nose that curves out and downward where his nostrils aim, like an eagle’s. White beard and flowing hairs top his crown. He moves lilting with the hours of the day, and giggles boyishly at times. 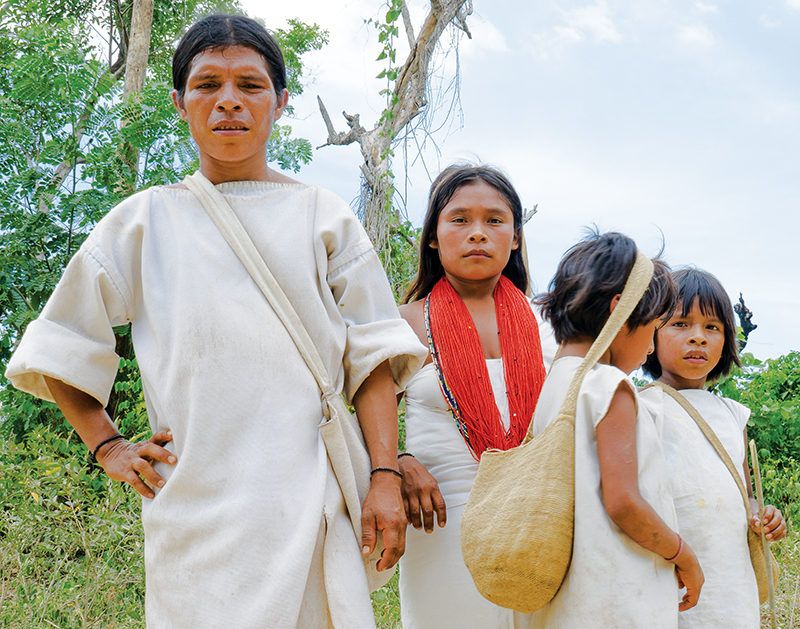 Sitting at his grand, self-crafted chocolate-mahogany dining table, sea breezes bump softly through the giant cabaña hall. He said: “The world has many different dimensions… and some people can see them. Sure. Many indigenous. It’s possible to have this kind of vision… But some people take bad energy,” he said clenching both fists and sucking them into his chest. “They absorb bad energy. Even so, we will go up,” he said confidently, slowly curving his hands around a gestured globe. “The Mayans said we are at the beginning… But it’s very difficult to take the first step.”

In the course of a few conversations, we talked about illumination. “It’s life!” he said, smiling through his wizardly beard. “Es necessario in this life to wake up.” When you are looking at the table, at the people, at this or the sea, you must feel the molecules and make connection with God. Thinking all the time of God and God things,” he said with a nonbinding kind of engaging force. “We must wake up! But the systema is designed to keep us sleeping.” He giggled; I didn’t.

But wherever the ‘systema’ was, it surely wasn’t anywhere near my hammock. Just neighboring your hammock, wherever you rest on the Sierra stretch, are some exceptionally beautiful and pacifying beaches where you might dodge falling coconuts like some slow-mo littoral hero. Taxi or flag a collectivo running up and down the coast to Los Cocos, Buritaca and Palomino beaches. The surf could be decent at Palomino, and you can rent boards on the beach at Finca Escondida. Diving and snorkelling are available at Tayrona Park. Also, paddle in and tube down the Eden-like rivers of
Don Diego, Buritaca and Palomino.

Into the Lost City 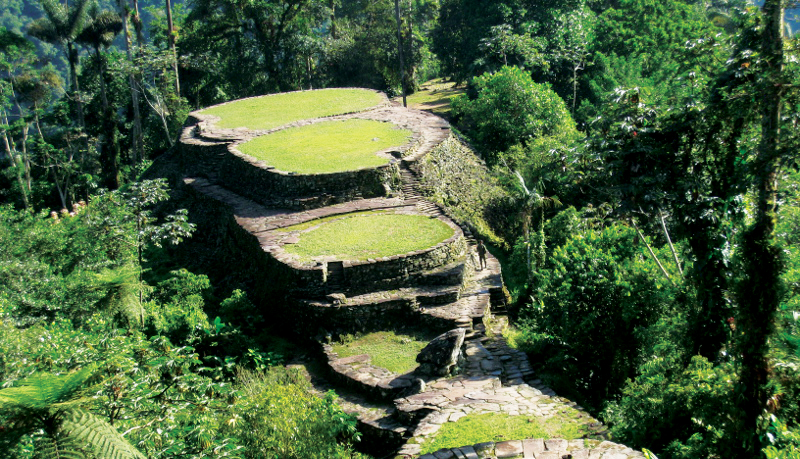 Ciudad Perdida is the heart of 300 lost settlements, formerly connected by stone roads. It was kept quiet by the Coguis for centuries until guaqueros, gruff treasure-hunters, started selling its ancient gold artifacts in the 70s to the black market, which prompted archeological and legal investigations. It was rediscovered, UNESCO offered press and protection and eco-tours sprang up. You can do the trek in four to six days, depending on your speed. It’s taxing at times but worth the trip to South America alone. Aye, once the morning clouds roll back the sacred remains of the Tayrona on the last day, you’ll have forgotten the price of your flight by now, if you haven’t already.

Do or don’t do the Perdida trek, but surely undo your battles, listen to the indigenous spirit and let the Sierra Nevada de Santa Marta find you true in pure green, white and blues. •

Getting there
LAN flies to Santiago and then to Santa Marta via Bogota.
Qantas flies to Dallas Fort Worth with connections to Bogota with American Airlines. LAN and Avianca fly from Bogota to Santa Marta.
•    LAN: lan.com
•    Qantas: qantas.com

Where to Stay
•    Around Park Tayrona consider Gitana del Mar and Kantawa, which offers agua therapies, some in the river behind the property. gitanadelmar.com.co; kantawa.com
•    Closer to Palomino, see Playa la Roca and Casalina for a tranquil and romantic, eco-chic experience. playalarocaecohotel.com/en; casalinaecolodge.com
•    In Palomino, La Sirena and Aite Hotel are the pick, while for backpacker vibes, try Rancho Relaxo in Buritaca, The Dreamer Hostel or Finca Escondida in Palomino.
ecosirena.com; aite.com.co/en; ranchorelaxocolombia.com; thedreamerhostel.com/onthebeach; chillandsurfcolombia.com

When to Go
Equatorial proximity means that sunlight hours are pretty straight, from 5am to 6pm. The rainy season is changing here but you might want to see everything in full bloom after November and April when the foliage electrifies green and the mango trees drip with bright fruits.