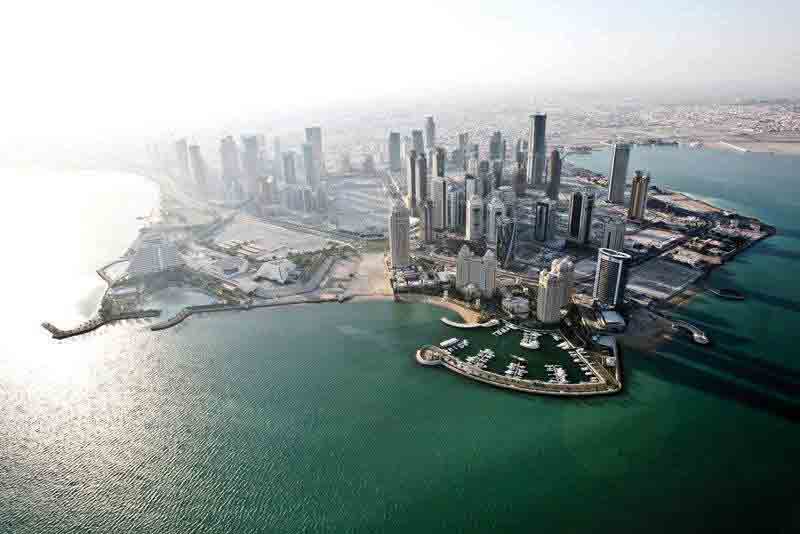 Once home to pirates and pearl divers, petrodollars have seen Doha bloom in the desert. Gleaming skyscrapers, each trying to outdo each other in architectural flair, rise along the waterfront where Bedouin tents once flapped in desert winds.

The capital of tiny, wealthy Qatar suddenly has appeal for Australians as Qatar Airways now flies daily from Sydney, Melbourne, Adelaide and Perth. For travellers heading to Europe and Britain, Doha is fast becoming an alternative Middle Eastern stopover to Dubai. It is well worth the stop. This is a world away from mainstream Australia, a place of fascination where falcons have passports and dhows race jet skis.

Qatar juts into the Persian Gulf as a peninsula off Saudi Arabia, with Iran across the water. It is home to about two million people and at 11,586 square kilometres is half the size of Australia’s largest cattle station – Anna Creek. It is also the richest country on earth per capita thanks to fabulous oil and gas wealth.

Where once people dived for pearls and the colonial British chased away pirates, this wealth has utterly transformed Doha into a thoroughly modern city. 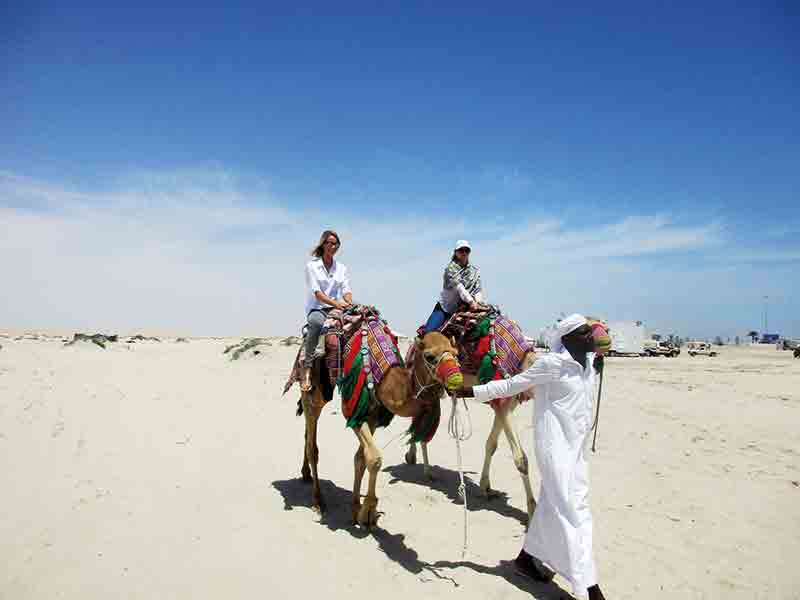 This is apparent on arrival at Hamad International Airport, which has a business class terminal and a private VIP terminal for people like the Qatari royal family. The city’s skyscrapers quickly come into view on the short drive to town, clustered along the waterfront.

It is also a great waterside pedestrian promenade complete with parks and sculptures. Children play happily in the various playgrounds, some obviously cared for by nannies, others by women clad head to toe in traditional dark Arabian garb.

Glance discreetly and you’ll notice the ladies’ garment material invariably is top quality, the intricate embroidery on the hems is exquisite, and the handbags are designer. 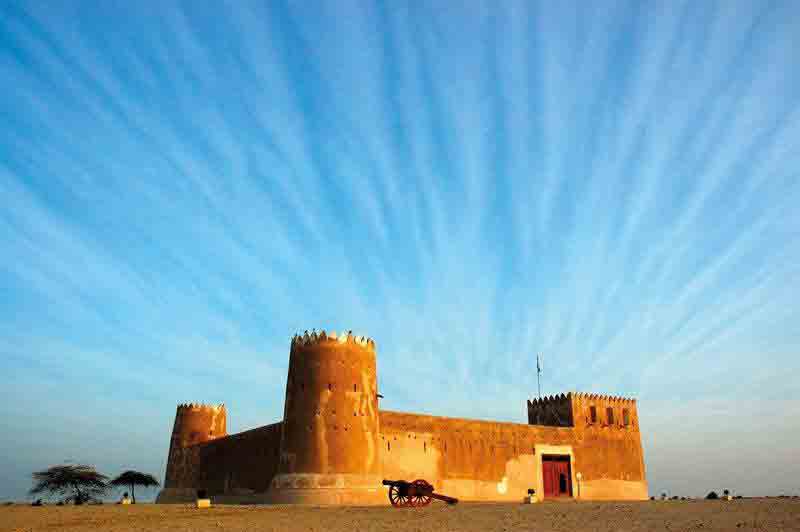 Like any international city, Doha has restaurants with a range of cuisines and modern, air-conditioned malls. The Italian-themed Villaggio Mall has an ice rink, bowling alley and even an indoor canal with gondolas.

However, for a taste of tradition head to the various bazaars, notably Souq Waqif. This low rise market complex is a bewildering maze of alleys packed with shops selling everything from fabrics to jewellery, spices to silverware. One shop had a suit of armour. Porters in uniform push wheelbarrows of goods for shoppers, and policemen patrol in heritage uniforms.

This historic souq fell into disrepair as air-conditioned malls sprang up but has had a renaissance with renewed interest from locals and visitors alike. Recent building work and renovations mean some of the mud-rendered shops are much newer than they appear.

While it is a magnet for tourists this is a working locals’ market, not a glorified souvenir stand. There is good natured bartering but no hard sell, and it feels absolutely safe.

Exploring with a small group in the evening, I promptly get lost in the throng and turn down the wrong alley while wandering from stall to stall, but our guide has my mobile number and we meet up near the waterfront where the souq opens up into wide squares packed with outdoor cafés. 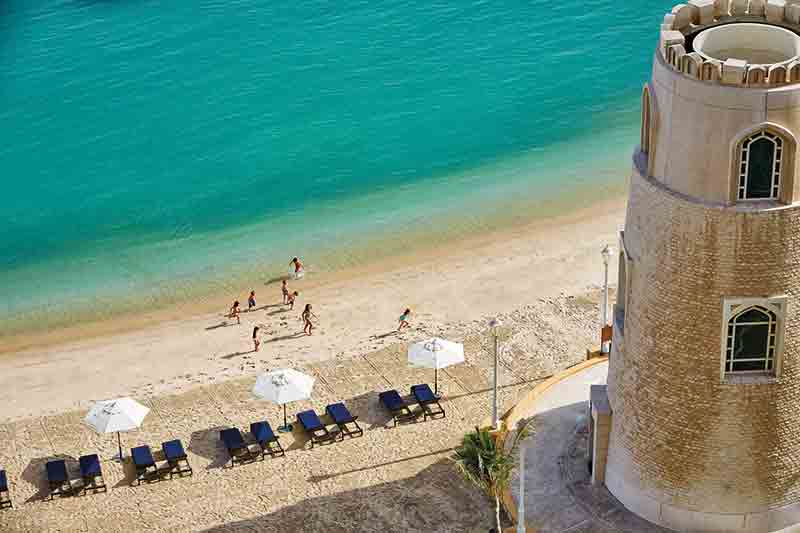 People sipping thick coffee and smoking shishas are happy to pose for photos on this balmy Arabian night. One group I chat with are mildly curious that I am from Australia, and with gracious Arab hospitality invite me to join them for a drink and a smoke, but our guide wants to keep on the move.

Further on we come to an extraordinary sight – the falcon souq. Falcons for sale, falcons for display and there is even a falcon hospital. It reflects a powerful man-bird bond steeped in Qatari tradition.

Inside a display room where a row of capped falcons quietly stand on perches, our guide makes the mistake of referring to them as ‘pets’. The dignified venue overseer quickly interrupts to correct him, saying they are family members, not pets.

A mild debate follows, which the falcon owner promptly wins by declaring his favourite falcon has its own passport. It is indeed a member of the family – and passports are used to prevent smuggling of the prized birds.

The stroll continues, and although we are in the heart of the city we come across a paddock with horses and stables. These fine Arabian horses are living evidence that in some cities you need to look behind the glitzy facades to find its soul.

Dinner is taken at the Al-Majles Al-Arabi Restaurant. Sitting on cushions in an upstairs room a parade of dishes arrive – mezze plates with various dips, breads, salads, barbecued meats, and plenty of them. I’m full but the food keeps coming, including sweet pastries for dessert.

It is a dry argument – in this conservative Muslim constitutional monarchy major hotels can serve alcohol but ordinary cafés do not – but the mineral water is just fine. 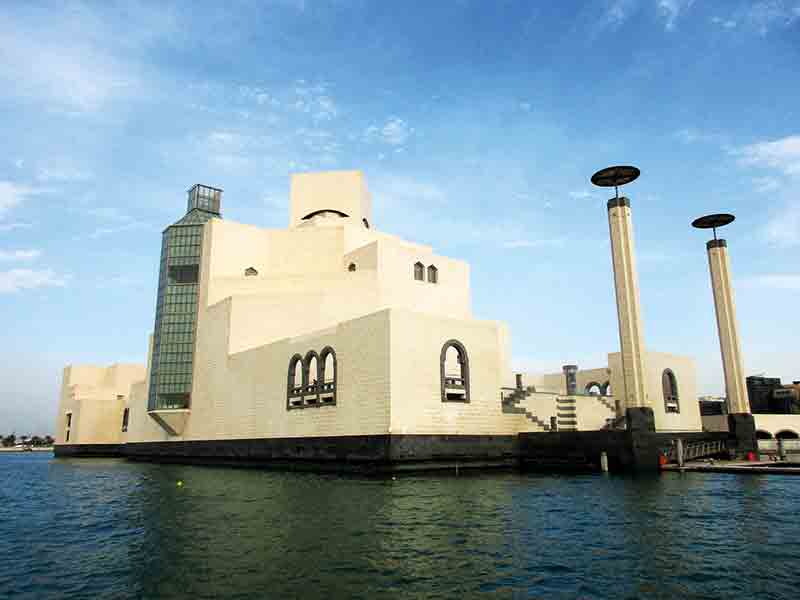 To learn more of Muslim heritage, the waterfront Museum of Islamic Art is a landmark building housing treasures extending beyond art to science, mathematics, astronomy, geography and more. Entry to browse its religious and secular collections is free.

Lush green parks next to the Museum are a relaxing spot to take in the view across the bay to the skyscrapers, complete with a sculpture tribute to the pearling industry – the Big Oyster with Big Pearl. Aussies used to ‘big’ things will love it.

To really enjoy the bay, head to the nearby dock area where dozens of traditional dhows moor. After a casual chat with some watermen and the payment of a small fee, we are welcomed aboard for a sail around the bay, enjoying the sea breeze on calm waters.

A couple of young bucks on jet skis come roaring by – when they see our cameras they start putting on a show, jumping over each other’s wakes and good naturedly hooning around the dhow, waving and posing.

It is an interesting juxtaposition, the modern literally crossing the bow of the traditional, but an even more intriguing one is to come.

The dhow drops us near our luxurious Four Seasons Hotel with its private beach. Next to the beach the superb three-story circular Nobu restaurant perches like a chic flying saucer at the end of the marina. However, for lunch I head to the hotel’s ground level terrace restaurant for a casual seafood meal overlooking the beach.

At tables on either side are Arab couples dressed in traditional robes, the men proudly in flowing white, the women demurely in top-to-toe black, complete with head coverings. 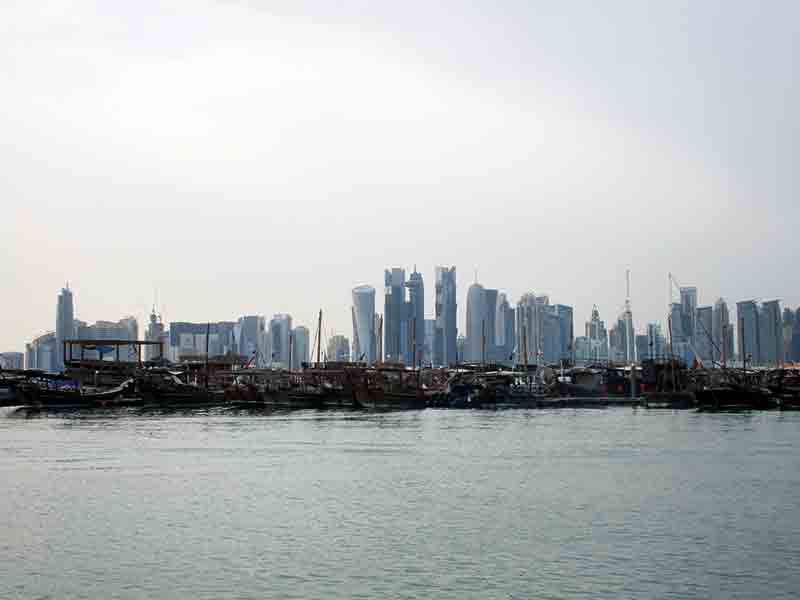 A few metres away on the sandy beach, women in bikinis sunbathe and swim. The two vastly different dress codes add food for thought to the meal.

While Doha is a man-made wonder fuelled by energy dollars, landmarks in the surrounding desert such as Al Zubarah Fort show this is a tough environment when you leave the city comforts. No trip is complete without a visit to a genuine natural wonder.

Khor al Adaid, the Inland Sea, is about an hour away from Doha on a drive where wealthy suburbia gives way to oil and gas fields, and finally the road gives way to desert.

Sweet tea and a camel ride at a Bedouin tent camp set the scene, then we hang on during some serious 4WD dune bashing, flying up and careering down huge dunes. It is thrilling and frightening in equal measure as the driver edges along narrow ridge tops then plunges down what seem to be impossibly steep sides.

Khor al Adaid comes into sight – an inland sea surrounded by desert, with barren stretches of Saudi Arabia in the distance. The 180 square kilometre tidal basin is connected to the Persian Gulf by a 10 kilometre channel and is an important seawater habitat for marine life including turtles and dugongs.

For visitors it is an extraordinary vista; blue sky, blue water and desert sand as far as the eye can see. The total absence of greenery, or human habitation, is disconcerting. This is magnificent desolation on a grand scale, and not a place to break down. 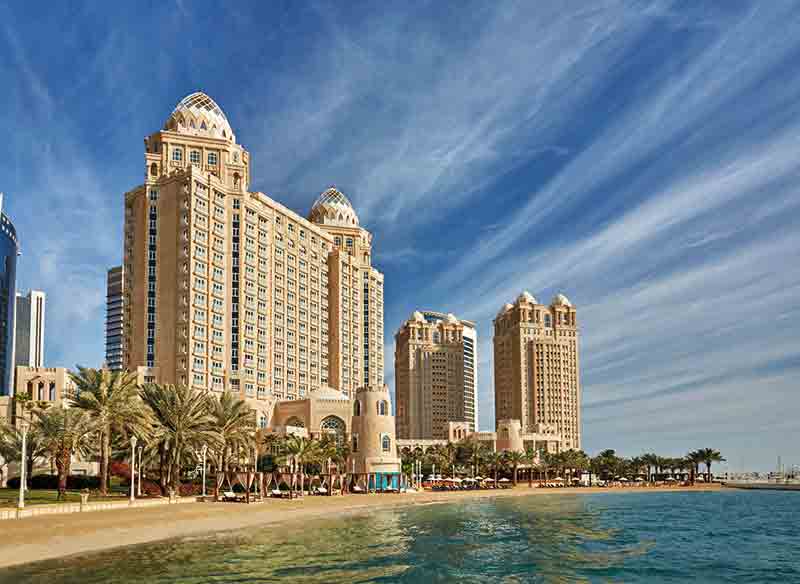 A drive further on over more wind-sculpted dunes takes us to waterfront tents with change rooms for a swim in Khor al Adaid, followed by a lunch fit for a sheik while reclining on thick cushions enjoying water views.

Pre-dinner drinks on the rooftop of chic Nobu that evening also gives water views, without the nervousness of potentially being stranded in the desert.

A wilderness safari to follow city tours is a powerful reminder that for all its oil wealth, Doha sits on the waterfront with the vast desert sands of Arabia behind it shaping the city’s character. •