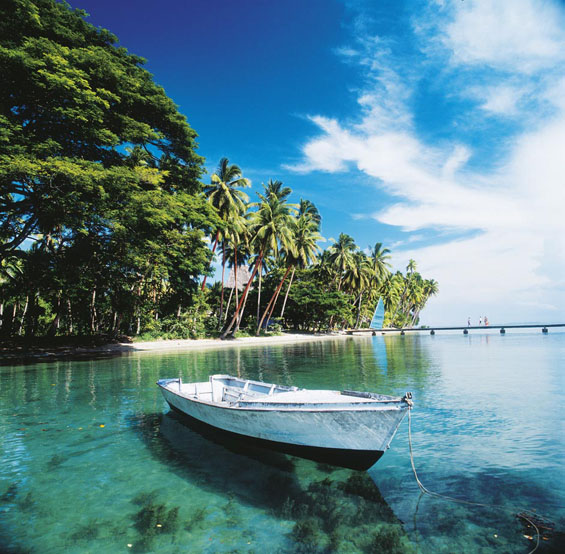 Fiji has some of the world’s best diving, especially if you want to get up close and personal with some friendly local sharks.

“I’d like to introduce you to some of our friends,” enthuses our guide Manasa, aka Papa, as he holds aloft a well-worn loose-leaf binder. The photographs within it elicit nervous laughter from the divers. Then again, one can hardly blame them: with names like Scarface, Hook and Big Mama, these photos depict no ordinary friends. They are sharks and soon, we will be making their acquaintance.

Sprinkled across the azure expanse of the South Pacific, the Fiji islands are renowned as a tropical paradise. Their palm-fringed beaches, gin-clear waters and incredibly friendly people have long epitomised the magic of the South Pacific. In recent years, Fiji has also gained a reputation as a world-class diving destination. Encircled by a vast reef, the shallow lagoons lying within its protected waters harbour a wealth of attractions including pelagics, spectacular reefs and especially, sharks. I have come to Fiji to dive with sharks at Beqa (pronounced Beng-a) Lagoon, home to Shark Reef, one of the world’s premier spots for shark-diving encounters. 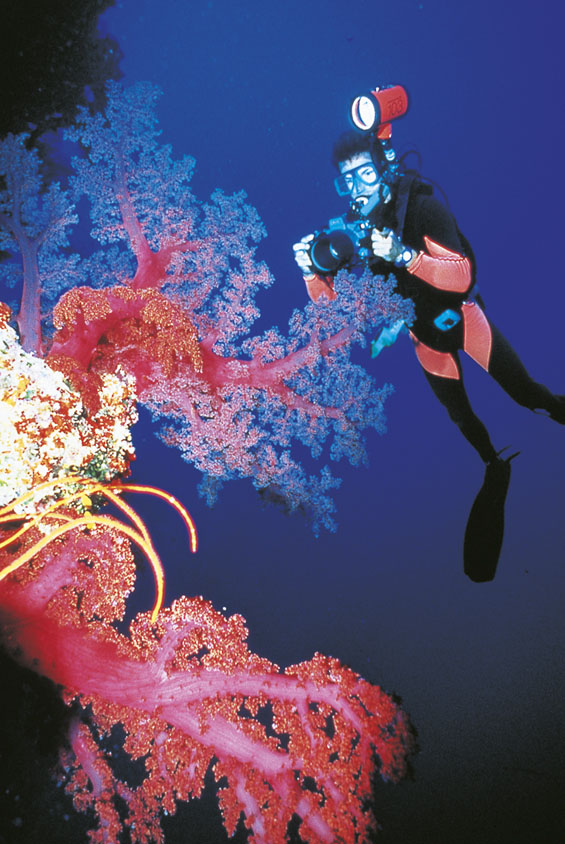 Prior to the advent of Christianity, the residents of Beqa Island worshipped sharks and made a covenant, they claim, with Dakuwaqa, the Shark God: in return for their devotion, they were promised that sharks would never harm them and that they could forever swim without concern. As shark feeders Manasa and Rusiate (“Rusi”) hail from Beqa Island, this was a good omen indeed.

The journey to Shark Reef is on the MV Predator, a custom-built Bladerunner Hydrofoil catamaran with a crew of eight, including the two shark feeders. Established in April 2004, the Shark Reef Marine Reserve on Viti Levu is the first of its kind in Fiji. Depending on the season, up to eight shark species can be seen here including grey, blacktip and whitetip reef sharks, as well as lemon, sicklefin lemon, silvertip, tawny nurse, bull and tiger sharks.

After 25 minutes and our somewhat ominous briefing, the moment of truth has arrived. Descending to 30 metres, everyone assembles behind a specially constructed rock wall next to a sheer drop-off that plunges into the depths of the Beqa Passage. This is The Arena, the first of three feeding sites we visit during the first dive. Several large, wheeled garbage containers crammed with frozen fish parts have already been sent down and placed in position. In moments, the first of the day’s customers arrives to peruse the menu. Joining them is an assortment of red bass, rainbow runners, Napoleon wrasse and spotted eagle rays, and an endless array of reef fish. Around 267 species have been observed here. The first to arrive are a few bull sharks, including one massive specimen who turns out to be Big Mama. And big she is, too: at more than three metres in length, she dwarfs all the others. 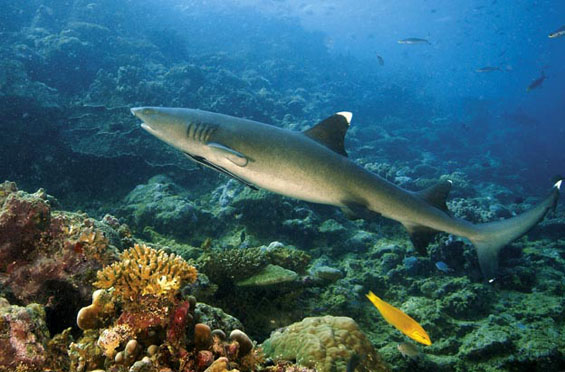 A trio of tawny nurse sharks soon joins them. Within moments, their heads are right inside the containers, greedily consuming the contents like big, grey vacuum cleaners.

After 17 minutes, it is time to ascend to the second feeding station: The Den. Here, the feeders are engulfed by whitetip and blacktip reef sharks along with the occasional grey reef shark, eager for a handout. Ten minutes later, everyone ascends to the reef-top, and the final feeding station. Yet more of the graceful predators appear, in a seemingly limitless supply, along with hordes of rainbow runners, yellowback fusiliers and sergeant majors.

Our second dive site for the day is The Take Out, situated at a depth of 16 metres. This is where the big-fish action is. Bull sharks, unmistakeable with their blunt heads and stocky builds, are already circling in the blue as everyone takes their positions. The next 35 minutes are spellbinding, as a seemingly endless procession of bull sharks swoops by just metres from my camera. With all the sharks swimming about, it’s no surprise that our safety is paramount. Dive guides armed with pokers take position behind the guests to ensure the sharks don’t get too close. 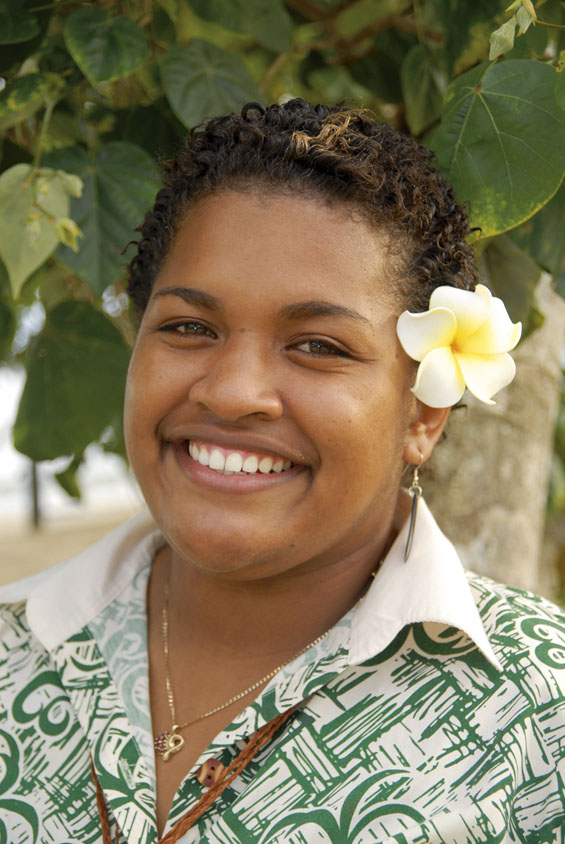 Shark dives are held several days a week. Not surprisingly, Shark Reef is a very popular dive and the trips fill up very quickly. While most people come strictly for the shark dives, the lagoon’s broad expanse includes more than 20 dive sites. Carpet Cove more than lives up to its name, rising to within eight metres of the surface, its coral growth shrouding a series of pinnacles. Innumerable basslets and coral trout swarm among soft corals garbed in vivid hues of red, orange and purple, while rocky crevices are the abode of nudibranchs and flatworms. Other commonly encountered denizens include barracuda, batfish and cuttlefish.

E.T. is a lone rocky pinnacle rising 25 metres from the sea-bed, bisected by a 10-metre-long passage. Its dim interior is home to a variety of shrimps, crabs and nudibranchs.

Outside, large fan corals sprout from the rocky walls along with a diverse assortment of whip corals, while soldierfish, squirrelfish and lionfish (scorpionfish) shelter beneath rocky overhangs. 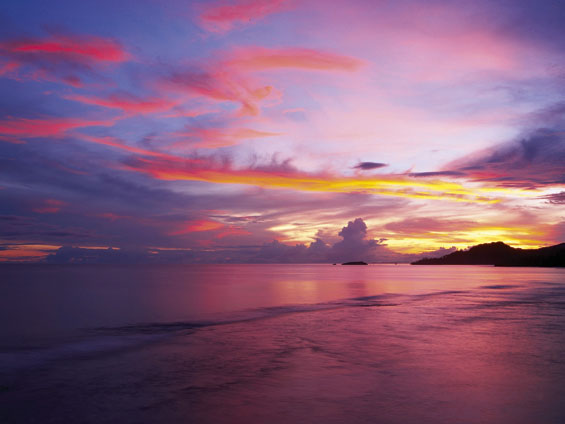 Viti Levu hasn’t cornered the market on world-class dive sites, however. To the south lies Kadavu, Fiji’s fourth largest island, boasting rugged natural beauty. Lushly forested hills descend to a coastline scalloped with innumerable bays, providing an idyllic setting for diving and snorkelling. Offering some of the best dive sites and conditions in southern Fiji, Kadavu is made all the more extraordinary by the limited number of divers that come here.

“Wild” and “untamed” are terms often used to describe the reefs encircling the island, though virtually every site is easily accessible via a short boat ride. The undisputed jewel in Kadavu’s diving crown is the Great Astrolabe Reef, situated on the island’s south coast. At a length of about 100 kilometres long, it the world’s fourth largest barrier reef and boasts a variety of outer reef slopes jam-packed with stunning hard coral gardens, along with steep drop-offs radiant with soft corals, submerged pinnacles and manta ray cleaning stations.

Lying to the east of Viti Levu, the island of Taveuni is nicknamed “the garden island” thanks to its verdant forests, which brim with tropical plants including numerous orchids. This moniker applies equally to the riches of its undersea garden. The Somosomo Strait that separates Taveuni from Viti Levu almost single-handedly earns Fiji the title “soft coral capital of the world” and is also home to two of Fiji’s signature dive sites: Rainbow Reef and The Great White Wall. Both make many a diver’s all-time top 10 list. 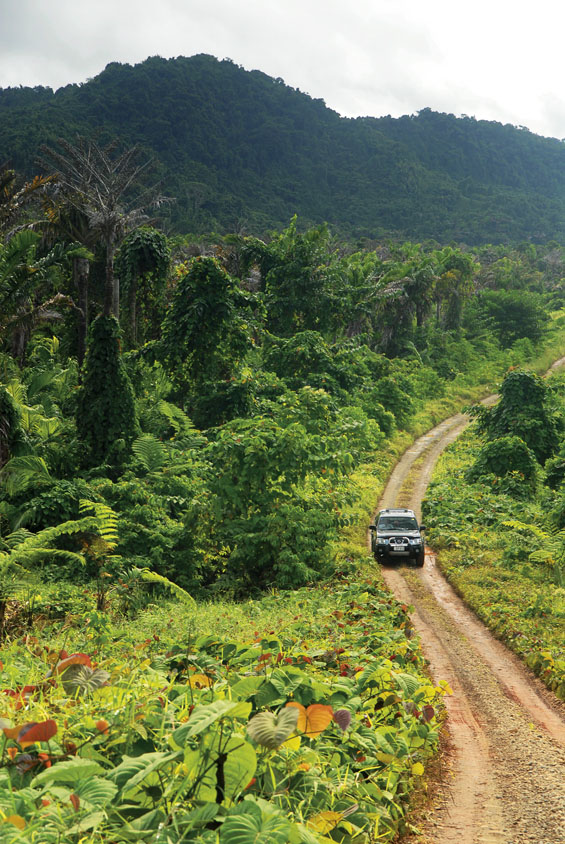 Not surprisingly, the first impression you’re likely to have at Rainbow Reef is of a blaze of colour. Strong currents flushing through the Somosomo Strait bring a mass of nutrients, ensuring the plentiful soft corals are in full bloom. Swarms of orange-and-purple anthias and clown triggerfish frolic amongst the abundant coral growth, while scores of anemones are guarded diligently by their attendant anemonefish. This is also big-fish country, with the currents attracting a bevy of pelagics including barracuda, whitetip reef sharks, manta rays and, occasionally, a leopard shark.

The Great White Wall certainly possesses no ambiguity as to its major attraction. Exiting a cave at 25 metres, it’s easy to think you have gone too far and ended up in the Antarctic. What appears to be a massive sheet of glacial ice is a sheer wall shrouded in an incredible expanse of white coral descending to 80 metres. In reality, the coral is a pale shade of lavender, its white appearance created by the depth. Whip corals and several large gorgonians, along with a multitude of square-spot anthias, add a dash of colour. As this can be a very deep dive, it’s essential to keep an eye on your dive computer.

The islands of the Koro Sea provide exceptional diving as well. Various liveaboards explore the seemingly endless reefs, bommies and walls scattered throughout these outlying jewels. 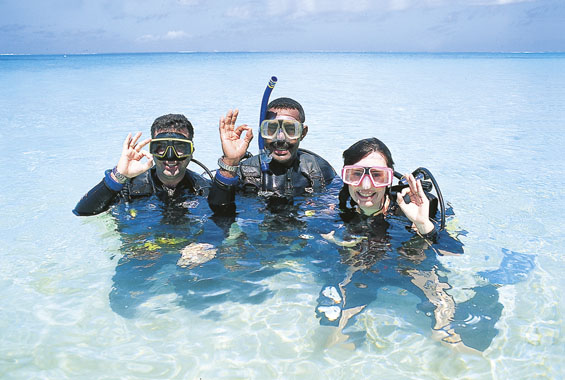 Bligh Water, Nigali Pass, Wakaya, Koro and Namena (Namenala) Island are legendary for their big-fish action. Swirling schools of trevalley, barracuda, Spanish mackerel, dog-tooth tuna, manta rays and nurse sharks are just some of the pelagics that congregate in the strong currents that sweep the area.

Namena’s barrier reef is protected as a marine reserve and is home to 400 species of corals and more than 1000 invertebrates. Add to that three species of sea snake, hawksbill and green turtles, bottlenose and spinner dolphins and a plethora of whale species including minke, pilot, sperm and humpback. The only thing lacking here is a horde of other divers.

With more than 300 islands from which to choose, Fiji’s diving opportunities are virtually boundless. Couple these with the hospitality of some of the world’s friendliest people, and Fiji will leave even the most discriminating of divers exhausted and exhilarated. With its intoxicating brew of sharks, stunning coral reefs and superb macro, this jewel of the South Pacific has it all. Bula! •