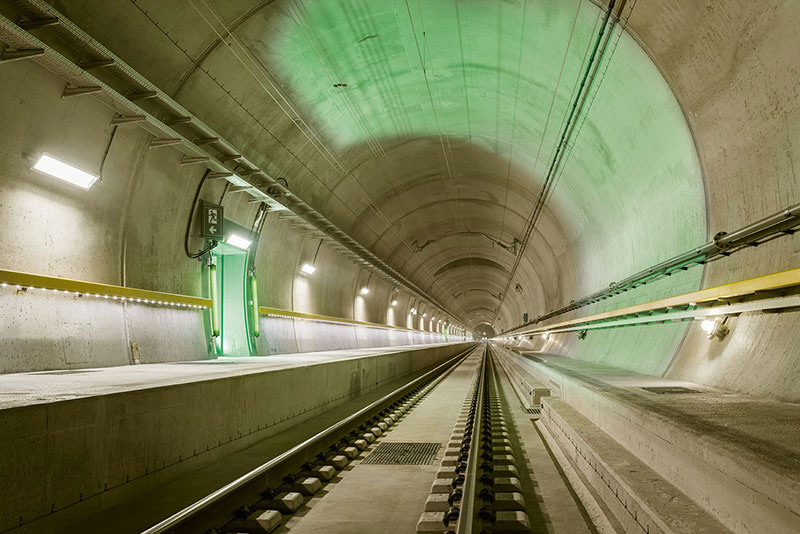 Swiss Federal Railways SBB is giving passengers the unique opportunity to explore the interior of the world’s longest and deepest train tunnel for a limited time before it enters into service on 11 December 2016.

At 57 kilometers, the Gotthard Base Tunnel is a record-breaking construction which has taken 17 years to build through the Swiss Alps. Once scheduled services commence at the end of the year, it will take just twenty minutes to travel the flat-track route from north to south, making for a smoother, easier, quicker and more comfortable journey through the Swiss Alps than ever before. Regions and neighbouring countries on both sides of the tunnel will move closer together, and journey time from Zurich to Milan will be just two hours and 50 minutes, cutting an hour off current time.

With the test operation currently in full swing, the official opening of the tunnel is on track for 1 June 2016, and from 2 August, passengers travelling on the special “Gottardino” train will have the chance to travel deeper into the mountain than ever before, with a stop at the station in Sedrun. Here, 800 meters below the surface, visitors will have the exclusive opportunity to disembark and explore the giant tunnel with a guided tour.

Once regular services commence and trains are travelling through the tunnel, a stop will no longer be possible. Therefore, the Gottardino journey is truly a once-in-lifetime experience, and will only run until 27 November, with tickets strictly limited.

The Gotthard Tunnel has surpassed Japan’s Seikan Tunnel, which is just shy of 54 kilometers, as the longest in the world
The project has cost around $10.3 billion
Over 2,000 workers were hired and eight workers died during construction
More than two million truck loads of rock were excavated, with giant tunnel boring machines cutting through nearly 100 feet of rock every day
Being almost entirely flat the whole way, the tunnel will enable trains to travel up to speeds of 250 kilometers per hour