Ehime Prefecture set out to be Japan’s “Ichiban” (number one) cycling destination, and in just 12 years, it’s one of the world’s best with the Shimanami Kaido.

Every two years, the entire Shimanami Kaido expressway is closed to traffic for a morning for “Cycling Shimanami”. It’s when 7000 cyclists from all over Japan – and the world – can have the road to themselves via several courses ranging from 30km to 140km round-trip from Imabari to Onomichi and back across the inland sea.

But you can do your own Shimanami Kaido ride year-round.

Businessman Tokihiro Nakamura launched his vision for a “New Cycling Culture” in 2010 when he became Governor of Ehime, vowing to make it a “cycling paradise”. In part, it was to stimulate regional economic growth and jobs with a focus on health and community through cycling.

Since Ehime has built cycle-friendly ramps allowing riders easy access to these bridges, which tower 34 to 78 metres above the sea and are up to four kilometres long. Ehime was the first location in Japan to paint blue lines on the road to guide cyclists along its 28 bike paths. This makes it easy to venture off the bridges so you can explore the islands without fear of getting lost.

A “Cycle Rescue” service provides roadside assistance and bike transport. Here you can find bike share facilities along the route. This includes a one-way bike hire option at each end that rents quality road and electric bikes. Over 150 businesses have signed up as “Cycle Oases”, supplying water, accommodation, pumps and tools along the way.

Now the Shimanami Kaido is inspiring private investment too. Like Wakka, a cycling mecca at Omishima. After a successful IT career in Tokyo, Arashi Murakami and his wife Hitomi decided to build their dream business. Wakka is dormitory accommodation with private cabins and glamping tents by the water on a former salt farm with stunning views of the Tatara Bridge.

Onsite is a cafe with epic views. Plus, bike hire, bike tools, a laundry, and showers. They have a fleet of bike transport vehicles – even a speedboat – if you prefer to explore and island hop by water taxi.

In Tobe, you can tour and shop at a traditional porcelain factory and try your hand at a pottery painting workshop. There’s even a “towel museum” at Imabari.There’s even a “towel museum” at Imabari. Thie century-old industry was almost wiped out by cheap Chinese imports a few years ago but has been revived thanks to clever marketing. Including training 1000 “towel sommeliers” who match the perfect towel to your needs!

For cyclists wanting more than breathtaking bridge views and kilometres of coastal roads, there’s Ehime’s “road in the sky”. Just a two-hour drive into the hills from the Shimanami Kaido, known as the The UFO Line is a 27km winding mountainous climb that boasts incredible views, steep gradients and thrilling descents that runs on the border between Kochi and Ehime prefectures. All within view of Ishizuchi, one of Japan’s most sacred mountains. Which is a holy place for followers of Shugendo, a sect that mixes Shinto and Buddhist beliefs.

The UFO name evolved from the Japanese Yuho – which means a series of magnificent peaks. It stretches from 1150 to 1700 metres above sea level and is even more spectacular when wild azaleas and rhododendrons bloom red and pink in early May. Geraniums and hydrangeas flower in July and August. Then autumn colours light up the steep slopes in October and November just before the road closes for winter. 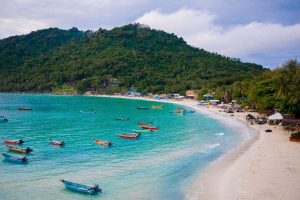 The Tsuchigoya Terrace makes a handy lunch stop nearby, and the stunning timber Sanso Shirasa Lodge is an excellent choice if you want to spend a memorable night in the mountains in gorgeous new cedar cabins. The adjoining lounge and dining areas have a ski lodge vibe. All these spectacular routes are just as enjoyable in a car or on foot if you’re not into cycling.

For excellent seafood tempura and a feast of other Japanese delights, Chisoya restaurant in Imabari is a popular stop. While wild boar ramen is a tasty lunch dish at Shishikotsu Ramen in Omishima. Deep-fried Sezanki chicken and sea bream rice (Taimeshi) are other specialities in Ehime. You can even stay in a 150-year-old Japanese house at Takinomoto Kondoke, where you can barbecue fishcakes and enjoy a delicious hotpot soup cooked over white oak charcoal.

The region is famous for its small but prolific citrus trees, which produce beautiful mandarins. And 17 types of oranges year-round with varying textures, sweetness, acidity and bitterness. It has inspired the citrus-infused beer with a creamy Guinness-like head at the excellent Omishima Brewery. Elsewhere you’ll find orange tiramisu and orange wine. At the Iori towel shop in Matsuyama, you can help yourself to a flight of different orange juices straight from the tap.

Ehime is also home to one of the world’s most famous pilgrimages. A series of 88 shrines spread over 800km set up by Buddhist priest Kūkai 12 centuries ago. About 4000 pilgrims tackle the route each year, hoping for health, wealth, academic success, enlightenment and a holiday. Some on foot, but mostly these days in cars and buses.

Pilgrims wear white vests or jackets and carry wooden staffs with bells and rosaries of wooden beads. Many wear basketry hats and collect stamps in a pilgrimage ‘passport’ to record their visits. Iwasaki Temple (#45), is not far from the UFO Line. It’s a peaceful one-hour round-trip hike through a stunning mountain forest. And offers a fascinating insight into this ancient Japanese tradition.

Hot springs were first discovered in Ehime 3000 years ago. Join the locals for an Onsen experience and make sure to bring a large towel for drying and a little one for modesty. Follow the locals and wash at the tiny stools before luxuriating in hot and cold pools (up to 41 degrees Celcius), steam rooms and saunas. One of the best in Ehime is the Takanokono Onsen. It’s the most relaxing, meditative, cleansing experience for just $5, and a one-hour massage will set you back about $50.