Mauritius is much more than luxury resorts sitting pretty on an idyllic beach. It’s a melting pot of culture and history that hasn’t gone the way of the Dodo. 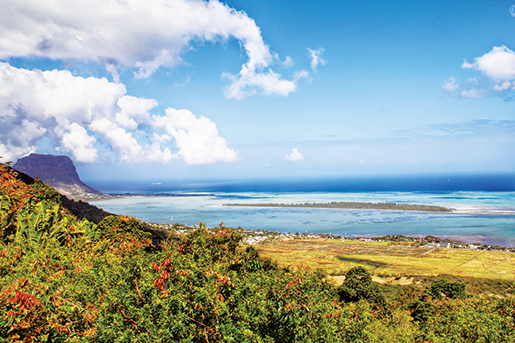 Les Trois Mamelles or the Three Breasts, Le Pouce which looks like an up turned thumb, and Pieter Both, a conical mountain topped by a boulder which legend goes, is a goatherd who was transformed into a rock for disturbing the fairies. As I drive past bougainvillea bushes in shades of violet, fuchsia and red, jagged volcanic mountains, groves of coconut palms interspersed with pineapple plantations, rustling fields of jade green sugarcane, under a cobalt sky with cotton candy clouds, my affable Creole guide Amar, keeps me entertained with local stories and legends. One of the first places in Port Louis that Amar shows me is Marie Reine de le Paix, an open church on the flank of the Signal Mountain, with seven terraces and 82 steps of hard rock leading to the statue of the Virgin Mary, holding a globe of the world. The lovely spot with benches and flower beds is where the first Mauritian bishop was consecrated.

Nine hundred kilometres off the east coast of Madagascar, is the tropical fantasy island of Mauritius. Mauritius is a storybook of colonial influences, with the Dutch landing here in 1598, followed by the French who made it a French colony in 1715. They turned it into a busy port importing slaves from African countries and making it a haven for corsairs who plundered foreign ships. In 1835 the British abolished slavery but brought in indentured labourers from India to work on measly salaries on their plantations. Most tourists head here for the sun and sand, but for me it’s the bio-diversity and melting-pot culture that’s the real attraction and I am determined to delve deeper.

My home away from home is the luxurious Beachcomber property Paradis Hotel and Golf Club, which is a sequestered world of piňa coladas and palms and makes it hard to tear myself away from the lounger-and-cocktails-on the-beach life. Located in the rustic south-west coast, where there are seven kilometres of white beaches, and washed by the aquamarine waters of a vast lagoon, it lies in the shadow of a vast haunting clump of basalt, called Le Morne. Long ago it is said that runaway slaves called marrons, hid in the Morne Mountain. When slavery was abolished, guards were sent up to give them the good tidings, but the slaves thought that they were there to take them back and jumped to their death from the high mountain. This majestic monolith was added to the World Heritage list in 2008. 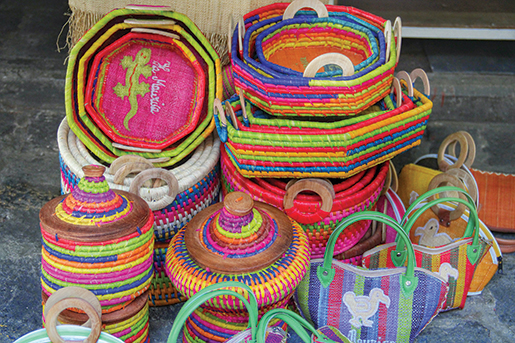 Walking through Port Louis, the crowded capital of Mauritius with its towering glass office towers standing cheek by jowl with old buildings with exquisite wrought iron balconies and latticework, and streets packed with dholl puri stalls (the unofficial national dish), can be a little overwhelming. To get a slice of local life I walk through the noisy Central Market on Farquhar Street with its Victorian arcades and high-beamed roofs, which is a hive of activity, redolent with the smell of chilies and over-ripe pineapples and the lilting tones of French-Creole in the air. It’s a good place to soak up the hustle and bustle of the islanders, trawling through stalls selling woven baskets and table mats in rainbow colours, dried sea food, fragrant vanilla pods, blocks of tofu, long purple eggplants, fiery spices as well as herbs for every ailment under the sun. An interesting counterpoint is Le Caudan Waterfront, a slick and trendy shopping centre which even has a casino, disconnected from the rest of downtown, where I idle on the waterfront, looking at fashionable denizens with shopping bags in hand.

Fort Adelaide also called the Citadel was built by the British over ten years, to counter a probable invasion by the French. Today it’s a vantage point for views of the Moka Mountains, and the high rise buildings of the capital city juxtaposed against shabby buildings in Old Town. Pointing to the large Champs del la Mare racecourse (the oldest horse racing track in the Southern Hemisphere), Amar says with a smile, “Horse racing is the national obsession”. The Company Gardens in the centre of town is a cool oasis where locals sit on benches, gossip and gorge on chicken tikka sandwiches under the shadow of statues of labour leaders and vast banyan trees. Post sunset, however it has a sleazy reputation. I make a poignant pilgrimage to the stark Aapravasi Ghat, now in the throes of renovation. The simple building of rough stone was the immigration depot where the first indentured labourers from India arrived in coolie ships. They climbed the steps of the wharf to reach the depot where they stayed for three days before being sent to the sugar fields. It’s a UNESCO site today and a symbol of the historical connection between India and Mauritius – more than 70 per cent of Mauritians today are of Indian origin.

It was the dodo … always the dodo … that came to my mind whenever I thought of Mauritius, gleaned from my geography lessons in school. That flightless bird that was unable to escape the predators that came with the first settlers, the Portuguese, and became a symbol of extinction. Today the dodo is a national icon of the island of Mauritius, found on its coat of arms and immigration stamp, on countless wooden and stone souvenirs, and on T-shirts and sarongs. I see the real deal – two reconstructed skeletons and a plaster model by the door of the National History Museum.

In my attempt to find the real soul of the island, we drive through winding roads to Maison Eureka, a typical Creole house in the south west of the island, which looks straight out of Gone with the Wind. It was occupied by the Le Clezio family dynasty for 129 years, dating back to 1860 with 109 doors, turrets and a wrap around balcony. Set stunningly beneath the Moka mountain range, it’s been converted into a museum with each room following a theme. We admire the regal Chinese room with an intricately carved sequoia wood daybed and chairs made from cinnamon wood and an exquisite dinner gong. The dining room is set in readiness with Limoges crockery and 18 chairs with ornate chandeliers from Seychelles. The re-created bathroom is a blast from the past: a copper water heater and regal ebony ‘potty’. The house has an old-fashioned kitchen with wood fire, still in operation and serves delicious Creole food. 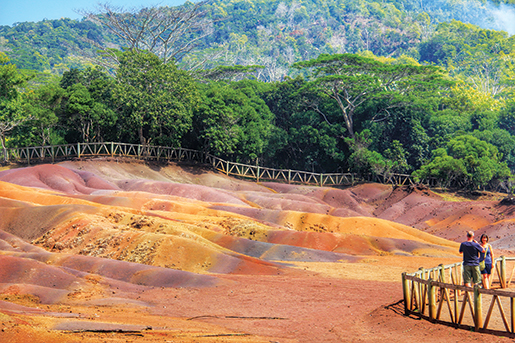 To explore the island’s volcanic past one has to drive to the Central highlands and the village of Curepipe. Legend has it that when there was an outbreak of malaria in 1867, many people fled low-lying Port Louis for higher ground; it was in this town that they paused to smoke their pipes, hence the name. At Trou aux Cerfs I walk on the rim of an extinct volcano ringed by pine trees and carpeted by woodland, where water and silt clogged with green moss form an exquisite crater lake. We drive through the dramatic Black River Gorges National Park, which protects much of the remaining virgin forests of Mauritius and has some spectacular scenery. With Bois de Natte trees draped with orchids and ferns, casuarinas and coniferous trees, and giant fruit bats sweeping overhead, this is a great chance to spot rare local birds like kestrel, pink pigeon and echo parakeet. Ever had a rainbow below your feet? In the village of Chamarel, I walk past surreal striped hillocks of seven-coloured soil of volcanic origin called Terres de 7 Couleurs, that reminds me of a Martian landscape. Each dune straight out of a child’s sandpit, flaunts a gorgeous hue ranging from deep purple to a tinge of russet like a mad artist’s palette gone awry.  “This spectrum of colours was due to the molten volcanic soil cooling down at different temperatures,” explains Amar. I am fascinated to hear that the colours of the sand have never dulled – and have not been affected by the island’s torrential rains.

The spiritual heart of the island is at Grand Bassin, where a gargantuan bronze statue of the Hindu God Lord Shiva, with a trident in his hand, towers over a natural crater lake. This is considered by many Hindu devotees to be an extension of the sacred Ganges River in India. The smell of flowers and incense in the air, women in festive saris with vermilion streaked hair, this is cultural fusion at its best. Come evening, I sip on a rum cocktail and am hypnotised by an erotically charged Sega performance with dusky beauties in flounced skirts, gyrating seductively to the peppy music and drumbeats in the lobby of my hotel. Sega is the traditional island dance that came with the 18th-century African sugar field workers who used it as an outlet to express their homesickness. Its throbbing beat is clearly African with tambourines called ravannes, accompanied by ringing triangles and rattling shakers. Dancers tease one another by coming close without touching and many of the themes are about love, hardship and suffering.

Sugarcane is closely linked to the history of the island punctuated with sadness. To work this abundant crop, slaves were imported from French possessions in West Africa, Mozambique and Madagascar. I understand that even today 85% of the island is under sugarcane cultivation. What better setting could tell the story of sugar than an actual sugar factory redolent with old memories? L’Aventure du Sucre is an interactive museum of sugar housed in the old Beau Plan Sugar Mill in Pamplemousses. The museum tracks the history of sugar, its route through the world to its scarcity during WWI, and the resulting Sugar Wars. From short films, to historical collections of artifacts, documents, as well as modelled ships and old machinery immaculately preserved, it explores the triumphs and failures of the industry. I am lost in a vision of a typical coolie’s day, which was run like clockwork from sun-up to sundown. Beau Plan’s chimney is a little worn, but still stands tall. The chimneys in colonial plantations were akin to banyan tree in an any little village; the chimneys were where the coolies would assemble when not working. 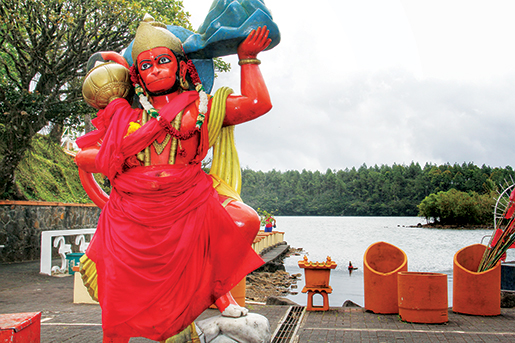 That night a gentle zephyr rustles the palms and the sound of distant drums and Creole music hangs heavy in the air. It’s one of those moments when everything seems right with the world…and that classic clichéd Mark Twain quote flashes in my mind….  “Mauritius was made first and then heaven; and heaven was copied after Mauritius.” I have a simple Creole meal of rice, pumpkin curry and a tangy ‘millionaire’s salad’ made from palm hearts, on a beach restaurant at the hotel as the Indian Ocean gently laps my feet. Sabine working with guest relations tells me how as a student she had an Indian friend who invited her to celebrate an Indian festival Ganesh Chaturthi with her – she still recalls the great festivities and the special food. She says in a matter-of-fact tone, “We Mauritians love to celebrate together like one family… it does not matter if you are Christian, Muslim or Hindu.” It’s a message that resonates in me long after I return home. •

Air Mauritius has three flights a week from Perth to Mauritius, codesharing with Virgin. airmauritius.com; virginaustralia.com

•    Maritim Hotels have two properties in Mauritius including the five-star Maritim Resort & Spa at Turtle Bay and the four-star Maritim Crystals Beach Hotel at Belle Mare. maritimresortandspa.mu; maritimcrystalsbeachhotel.mu
•    Beachcomber has eight luxury properties spread across the island. Stay at the plush Paradis Hotel and Golf Club near the Morne Mountain or the luxurious Royal Palm in Grand Baie. beachcomber-hotels.com