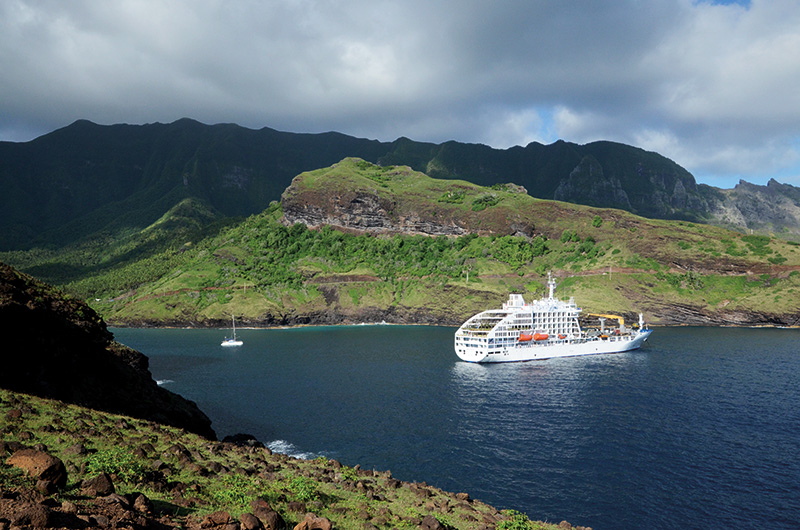 “I love work,” the old joke goes. “I could sit and watch people working all day.” And if that appeals to you as a holiday plan then there’s a very special cruise to the most remote islands in the world that allows you to do exactly that.

As I sit in an air-conditioned bar and watch muscular young men with traditional Marquesan tattoos steer crane-hoisted cargo on and off the ship, I have to think that work, as a vicarious pleasure, has its attractions.

I’m on the Aranui 5, the latest, most luxurious version of a ship that serves the Marquesas, a cluster of tiny islands between Tahiti and South America, bringing both freight and passengers – the kind who are a bit more adventurous than luxury liners’ typical travellers – then transporting island produce back to civilisation.

Locals who live on the Marquesas, a remote archipelago of landfalls that erupt straight out of the ocean, with humans squeezed along their shorelines on six of them, say they think of the Aranui as almost their seventh island. As their link to Papeete, the capital of French Polynesia, it’s been a vital part of their lives for many years, and most of the ship’s crew is recruited from the islands.

As well as the experience of life on a freighter-cruiser, those Marquesas also have an attraction all their own.

After all, they drew artist Paul Gauguin (who is buried here) and adventurer and explorer Thor Heyerdahl who, having lived a year on Fatu Hiva, returned years later after sailing his balsa wood raft Kon Tiki from Peru, hoping to prove that Polynesian islanders were descended from the Inca. 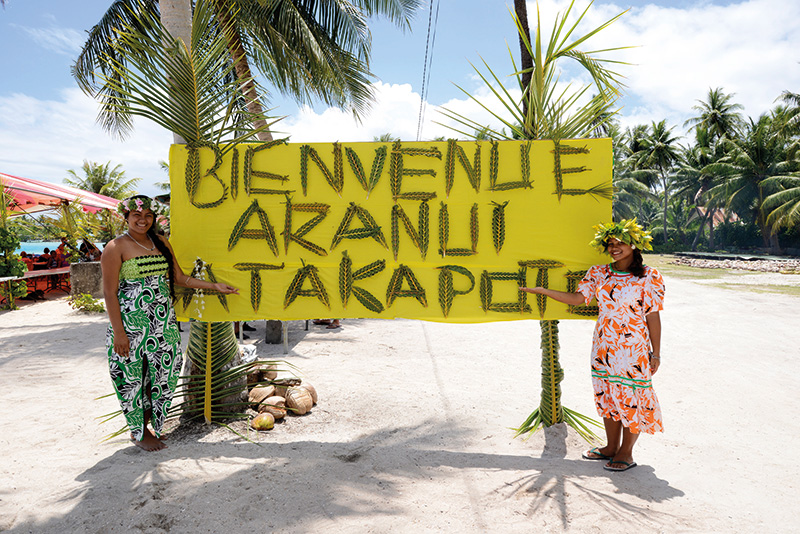 DNA studies have since proved they came originally from Taiwan, but it’s just as well they didn’t have that science back in the 1940s or we would have been deprived of one of the great adventure stories of the last century.

But what are the attractions of the Marquesas to the modern traveller? Firstly there is the romance of being on the islands farthest away from civilisation of just about any point on the planet. You get a frisson of “what if” when you land on an island with no airport or hospital, so used are we to having safety nets to deal with any emergency.

Strolling down the gangplank to an air-conditioned bus on a modern dock at our first stop at Nuku Hiva proved to be seductively misleading. A couple of days later, in Fatu Hiva, we were being “encouraged” to leap from a slippery dock to a lurching barge in rolling seas in pretty much the same way a sack of potatoes is encouraged on to the back of a truck by a hefty stevedore.

In between times we had been ferried to and from the ship on barges not unlike the floating platforms they used to transfer goods between the islands and the ship. Every night, the barges were lifted by cranes and stowed on the deck, watched by a gallery of passengers, Hinano local beers
in hand.

On the islands we’d be driven up the steep sides of long dormant volcanoes to the ruins of temples built by tribespeople who had discovered, to their cost, that however potent their tikis and ceremonies were, they were no match for the power of tsunami. 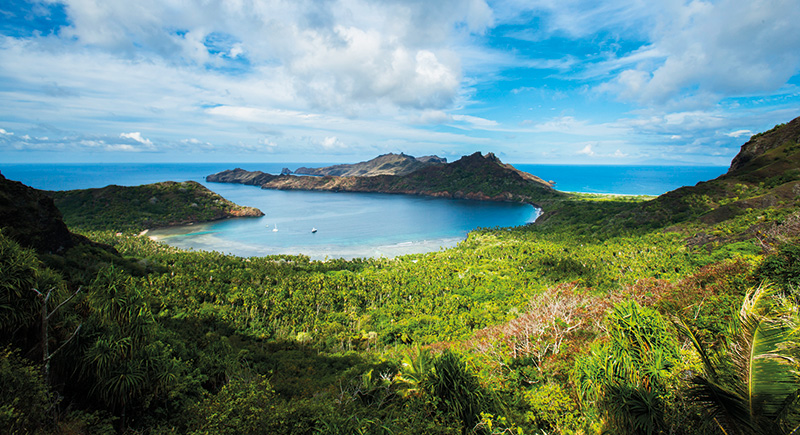 So there is still a sense of adventure as well as romance of travelling in a ship that carries cargo as well as cruise passengers. It’s a fine tradition, dating back even before
Moby Dick author Herman Melville disembarked from a whaling ship here.

But this latest model of the Aranui has leapt forward in time. Rather than hammocks and bunk beds, she has staterooms and suites with lounges and balconies that would not be out of place on the largest ocean liners.

With 80 per cent of its income coming from its 240 passengers, this is a cruise ship that takes freight rather than a freighter that takes passengers. And yes, it is luxurious with stylish timber cabin interiors designed and constructed in Italy before being shipped for installation to China, where the vessel was built. And there is plenty to do on board, including lectures on the history of the Marquesan people, the significance of their tattoos, a film about Belgian songwriter Jacques Brel (who, like Gauguin, is buried on Hiva Oa) as well as dance and ukulele classes.

On Fatu Hiva there are craft demonstrations followed by a 17 kilometre hike over the side of a volcano – with a stop for sandwiches and coffee at the top. Elsewhere, there were horse riding and 4WD treks, scuba diving, snorkelling, and game fishing. 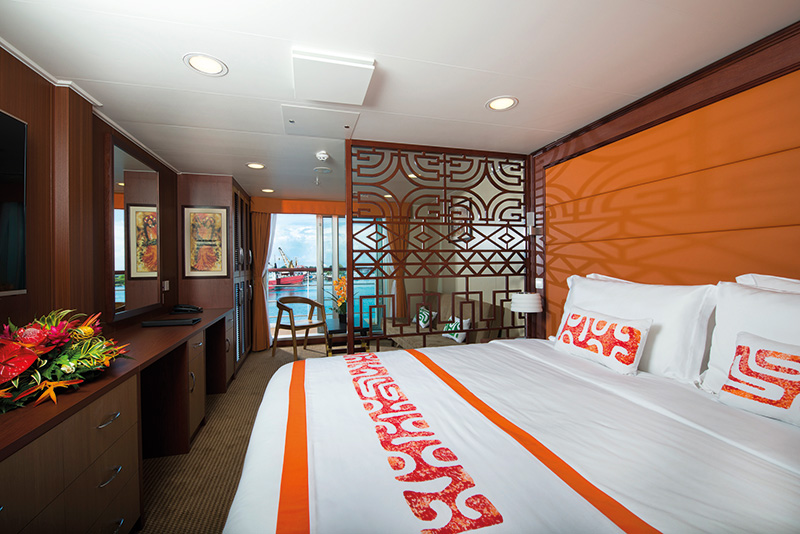 So there was plenty of touristy things for tourists to do. But being part of the lifeline of trade to and from these islands means people are always glad to see you. As someone put it, it’s like turning up at a concert and saying “I’m with the band.”

After ten days of island hopping, having returned to both Nuku Hiva and Hiva Oa to load up for the run back to Tahiti, we dropped anchor at Rangiroa, where some passengers visited a black pearl farm while scuba divers went off in search of sharks (or vice versa).

Finally, to put a luxurious cap – a crown, in fact – on a fascinating trip, we spend our last day at Bora Bora, the coral island famed for its over-water ‘bangalows’ around the lagoon.

This is an all play, no work stop as the Aranui isn’t licensed to deliver or pick up from anywhere outside the Marquesas. And Bora Bora has its tourist services well and truly worked out.

On the final night, as the Aranui headed homewards to Papeete, passengers and crew partied heartily, trying to remember which island it was on which we did this or that. But that is surely the sign of a good trip – happy memories that don’t fade but merge into one. •

GETTING THERE
Air Tahiti Nui flies daily from Australia via Auckland code sharing with Qantas. Overnight in Papeete before boarding Aranui 5 early the next day. Air Tahiti has great connecting flights between islands. airtahitinui.com; airtahiti.com

THE CRUISE
The Aranui 5 sails from Papeete, Tahiti, every three weeks for its 14-day cruise. Various packages, including airfares and overnights in Tahiti are available. aranuicruises.com.au