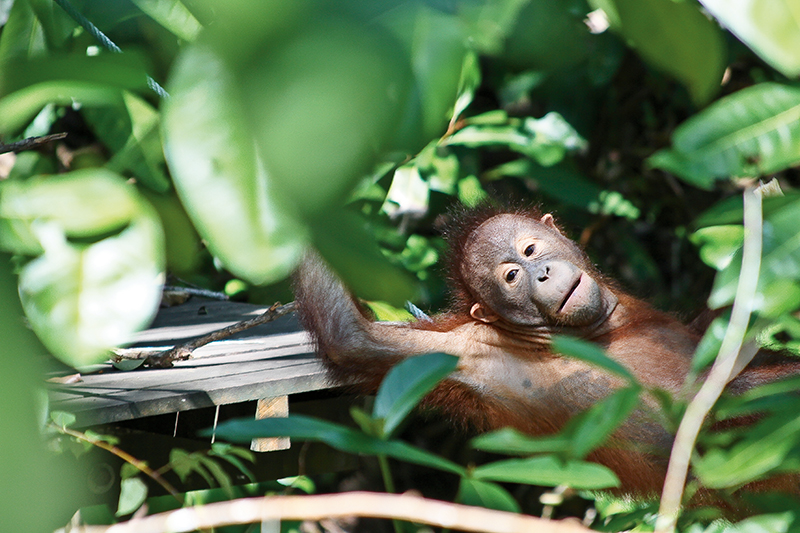 At the Shangri-La Rasa Ria, where the steamy jungles of Sabah meet the South China Sea, there are advantages to being up at dawn, before the heat of the day sets in. With the majority of other guests still asleep, I am climbing a forested hill, part of the 162-hectare nature reserve that enwraps the resort, as the sun rises over Mount Kinabalu inland.

A few hours ago, I sat in a hide at the foot of this hill watching a family of barking deer drinking at a waterhole. Now, as the forest stirs, the canopy resonates with the sound of several of the 60 bird species found here, including migratory hornbills and frigate birds.

Leading the way across a suspension bridge, is 20-year-old ranger Bern Souji, from the Dusun tribe, former headhunters whose people are scattered all over Sabah.

Gentle and softly-spoken, it is hard to imagine Bern’s ancestors removing their enemies’ heads and hanging them around their villages to ward off evil spirits. In fact, this son of a former forestry officer now spends the majority of his time caring for those most human of animals – orangutans.

“When I heard that the hotel was looking for an animal handler,” Bern tells me as we near the summit, “I thought I would be working with dogs, cats and maybe deer, but I get to work with orangutans.”

The Shangri-La’s nature reserve provides a coastal enclave for young orphans rescued from forested parts of Borneo coming under pressure from the proliferation of palm oil plantations. With their habitat disappearing fast, the race is on to save the species.

“This is a kind of kindergarten for the orangutans,” says Bern at the viewing tower looking out toward Mount Kinabalu, “It is only the first stage of their rehabilitation.”

“Orangutans usually live with their mothers for eight years,” he adds, “so our orphans don’t have that knowledge of basic skills like building nests.” 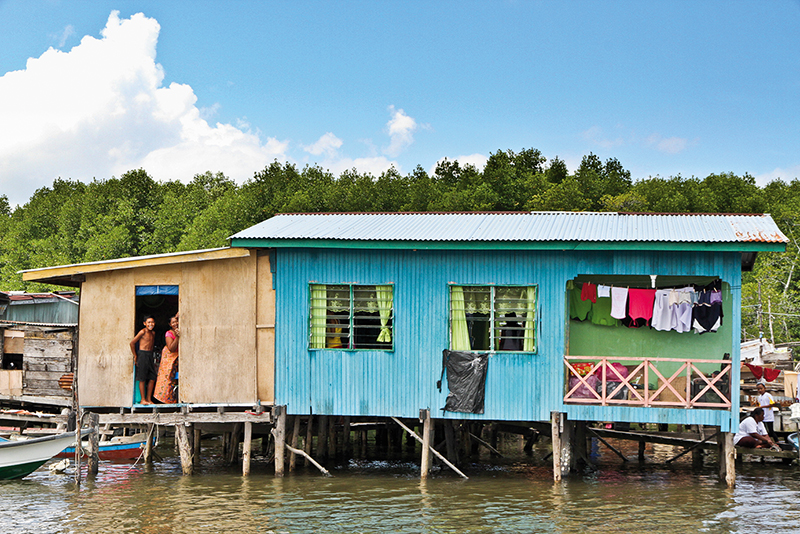 This morning Mount Kinabalu is obscured by cloud but we look down on the plains below it and my eye follows the circuitous course of a brown river weaving toward the coast.

“In the second stage,” Bern continues, “they have to mix in with wild orangutans and this is where they learn about fruiting, the seasons and weather and their home range. Last month Ulan, who was six years old, went on to the rehabilitation centre at Sepilok.”

“Yes,” Bern agrees, “but I feel like a proud father sending my child to university. If it is for their own good then I am happy.”

Three orangutans remain at the reserve, two boys and a girl all aged around four.

It is now 7.30 and the air has become sticky. In the past hour I have learnt more about Borneo’s orangutans from this dedicated young ranger than I have from any wildlife documentary I’ve watched. And I haven’t even seen a single orangutan yet.

That chance comes later that afternoon, when Bern’s three charges emerge from the forest to be fed in front of a viewing platform. At first, as an expectant crowd of guests awaits their presence, there is little sign of them.

Then we hear the distant cajole of the rangers and soon after the rustle of branches and leaves in the treetops. Then there it is, our first sight of an orangutan in the semi-wild, up high about 100-metres away.

Making its way like the drollest and most skilled of circus gymnasts, swinging on a network of ropes slung between the trees, is a sinewy collection of arms and legs covered in fine ruddy fur. The closer it gets, the more dexterous and playful it seems, hanging effortlessly on one curled foot, arms and legs splayed, nibbling on a treat. 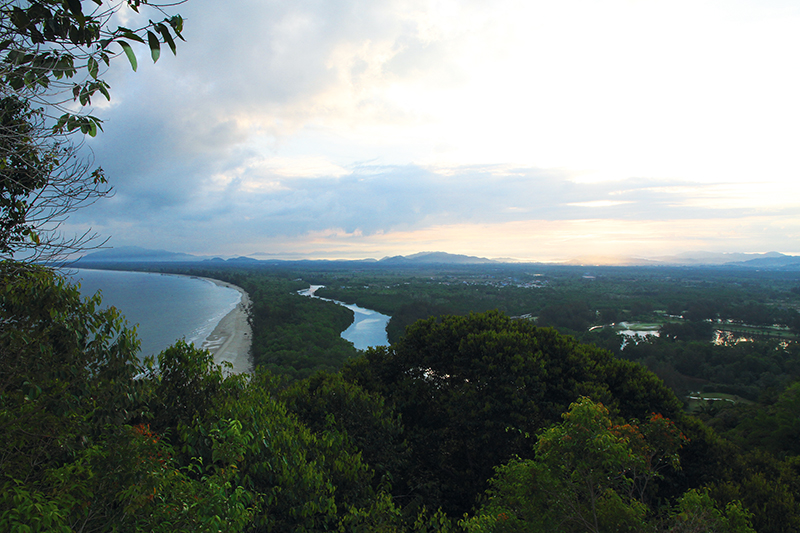 I watch for an hour as the infant orangutans perform high jinks, flip about and pause occasionally to snaffle some grub. Bern sits in their midst like an indulgent parent at a playground, responding when asked for a cuddle and pulling them into line when they get overexcited. It’s impossible not to see them as a family and easy to sense the affection in Bern and in the round, open faces and soulful eyes of the orangutans.

For those who don’t have time to visit the larger orangutan sanctuary at Sepilok, near Sandakan further south, or for families simply intent on a Borneo beach holiday, the Shangri-la Rasa Ria’s nature reserve is a wonderful resource. It brings the wildlife of Sabah’s forests to the guests staying in the 416-room hotel, on Pantai Dalit Beach.

Yet the natural setting, which includes its own long, secluded curl of soft white sand, is only one outstanding feature of this opulent resort, 30 minutes north of Sabah’s capital Kota Kinabalu. The hotel’s design and lay-out, with its large rooms and pools, restaurants and bars spread among extensive tropical gardens ensures that, even if full, it never feels crowded.

My outsized room in the Ocean Wing feels particularly like my own inner sanctum, with 90 square metres of personal space. Inside there are all the expected luxuries of a top-class property, including a massive bathroom with separate shower and toilet, voluminous walk-in wardrobe, lounge area with desk and dining table and a king-sized bed fit for royalty. Some other elements are a welcome surprise for a relatively remote hotel such as swift, free wireless internet and a personal Nespresso machine. But it is the private terrace, with outdoor bathtub for two and large daybed looking out to sea that provokes the most hermit-like behaviour.

But it would be a big mistake to stay in your room at the Shangri-la, with its 18-hole championship onsite golf course, beachside Segway track, large range of watersports, the divine spa, Chi, and superb range of restaurants.

So, tearing myself away from my room, I somehow find time to visit the spa for a 90-minute Chi Balance massage, using traditional Sabahan techniques, and to try five of the resort’s six restaurants. 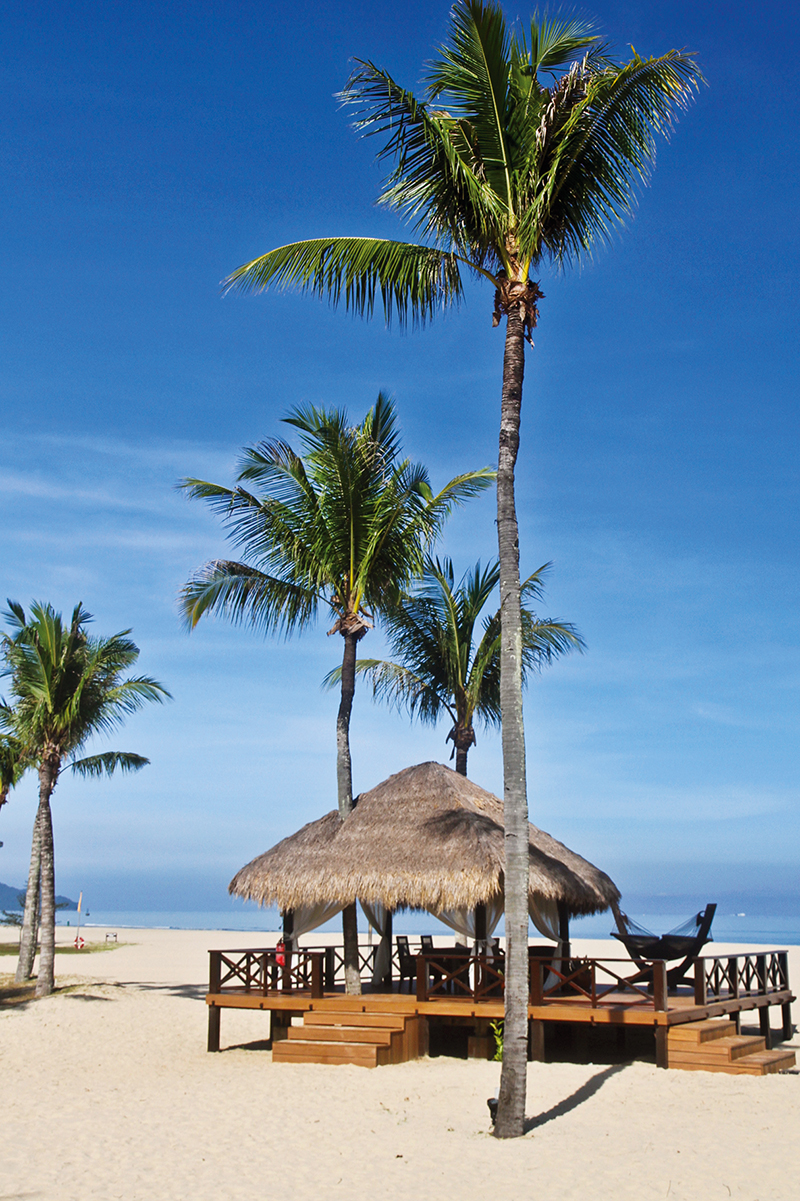 For breakfast I favour Coast, right on the beach and offering a cornucopia of the freshest Asian and European dishes as well as a cheeky glass of champers and barrista-made coffee.

At lunch, I grab something quick at the Coffee Terrace. Then, at night , I work my way up from Makan Street with its food stalls offering delicious simple fare to the gourmet eateries Naan, presenting Indian cuisine of exceptional quality and Kozan, a classical Japanese Teppanyaki restaurant where I watch the chef create masterpieces in the open kitchen.

If I weren’t feeling a tad adventurous, there’d be no need to leave the Shangri-la. But a quick tour of nearby Kota Kinabalu, 75 per cent of which has been reclaimed from the sea, seems the least I can do. It is worth it for the view over town from the foot of Signal Hill at Australia Place, so named because our troops landed here near the end of the Second World War, and for the drive through the well-endowed university grounds, which exemplify the importance Sabahans place on education. A stroll at the waterside Sinsuran night market, with its fresh seafood and stalls sizzling satay and other Malaysian snacks is also an eye-opener.

Another day I take a boat cruise along the nearby Tambalang River, past inlets festooned with healthy mangrove systems to a village built on the water and inhabited by sea gypsies. We stop at a traditional stilt-house and over fresh coconuts hear stories of this seafaring people’s way of life.

It’s these unforced opportunities to learn about Sabah’s flora and fauna and its diverse culture that make the Rasa Ria much more than a fine family-friendly resort on one of Malaysia’s most beautiful coastlines. For me, it’s been a deeply relaxing stay enriched above all by meeting Bern Souji and his adorable family of orangutans in the nature reserve. •

Air Asia flies twice daily to Kuala Lumpur from Sydney and Melbourne and regularly from the Gold Coast and Perth, with onward connections to Kota Kinabalu. On-board hot seats (in quiet zones and emergency exits) are available for purchase. airasia.com

Where to stay
Shangri-la Rasa Ria has over 400 spacious rooms and six restaurants. Perfect for families but also for couples and never overcrowded. shangri-la.com/kotakinabalu/rasariaresort

The Shangri-la Tanjung Aru is an excellent five-star alternative, closer to town and to the airport and with extensive facilities for families and couples.
shangri-la.com/kotakinabalu/tanjungaruresort/