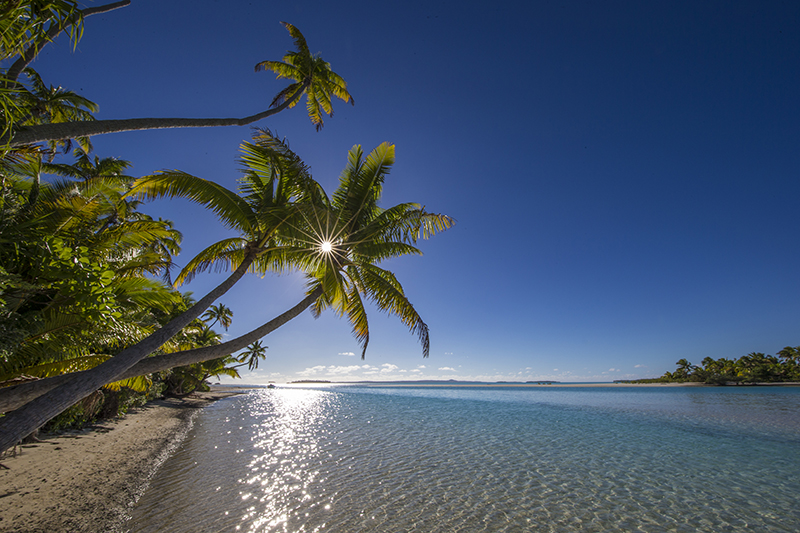 A rather rotund Slovakian tourist is wearing a too tight t-shirt which states “Never underestimate a man with a boat” which is apt, as I’m sailing through one of the South Pacific’s most iconic lagoons. Thankfully it’s not the chubby Czech behind the wheel of Titi Ai Tonga but Captain “Casanova” who simultaneously plays the bongos while steering the 21-metre vaka or contemporary canoe. To his left, sits the colourful crew crooning “I can see clearly now the rain has gone”, paying homage to the previous day’s typical, tropical weather. Ahead of him, lays the Aitutaki lagoon, one of the most photographed lagoons in the world.

There are no clouds today as we skim the cocktail blue ocean and it’s impossible to judge where this lagoon ends and the sky begins. On this journey you’ll sail to three islands, wander white sandy beaches, and snorkel with giant trevally before being enticed back on board by the trumpet of a giant conch shell. 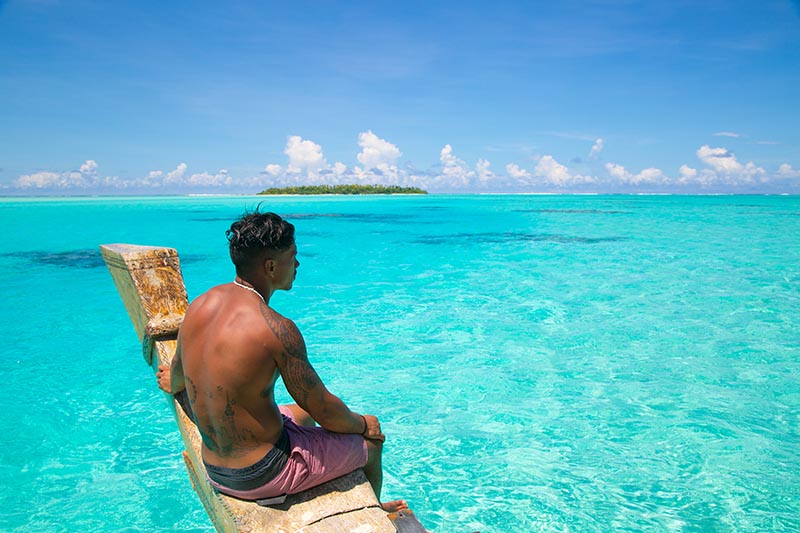 This is a South Pacific story of something old and something new. Where ancient traditions meet contemporary ways. Emerging as one of the most progressive countries in the South Pacific, these days you’ll find the Cook Islands is home to eco-efficient tourism products and female-friendly policies. This is a daring destination of unexpected beach bars where you can enjoy a fine New Zealand wine while witnessing a tiramisu sunset.

But there’s so much more to the Cook Islands than its luscious lagoons and its spectacular sky. 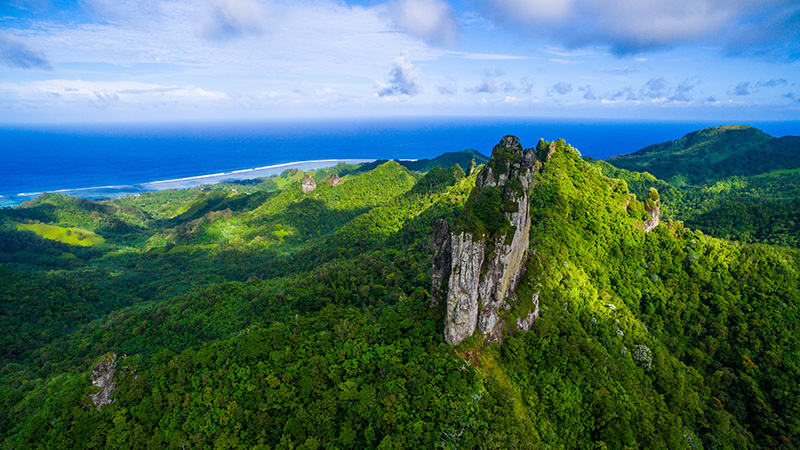 On Rarotonga, nestled in the village of Matavera and overlooking Ikurangi mountain, rests the Cook Island’s first purpose-built eco retreat. Matt and Luana Scowcroft added four glamping tents to the two existing cabins on the property two years ago, embracing a range of eco initiatives along the way. Composting, sustainably-sourced materials, natural and biodegradable toiletries and cleaning products, and free bicycles and organic breakfasts for guests are all part of life here. Five per cent of profits are also donated to local conservation projects.

“Everyone faces the ocean in the Cook Islands. We wanted to face the mountains,” Luana says.

“Traditionally, that’s where everyone lived. The idea of conservation is a traditional one. We chose the tents because they are completely out of the box but fit in with our traditional concept of buildings.” 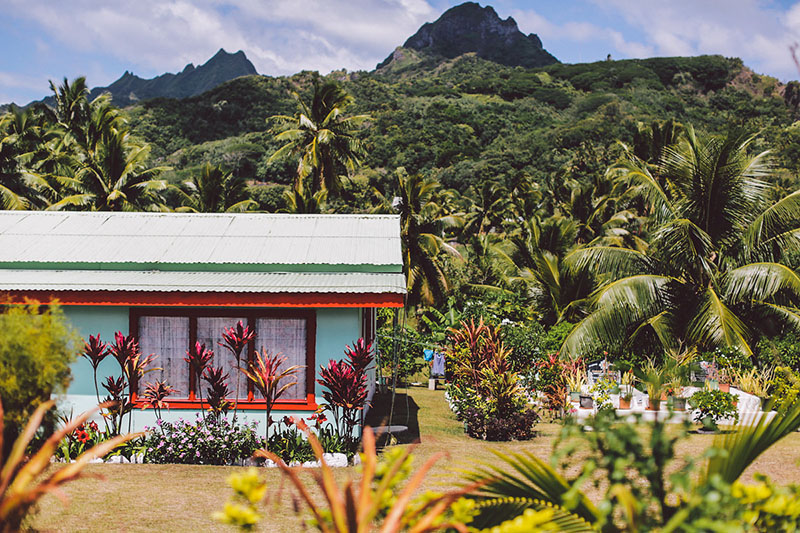 Also thinking outside the box, but embracing traditional culture, is the new Te Ara Museum, which opened in March this year. Manager Stan Wolfgramm describes the space as a “business incubator” in which a classroom upstairs teaches Cook Islanders about business while downstairs, a marketplace sells locally-made art, craft and food. There is also a museum which tells the chronological story of the
Cook Islands.

“We found a lot of the solutions in the South Pacific are piecemeal. This is all about economic self determination for Cook Islander people,” Stan says.

“This is the island’s tech hub. It is all about a platform for information and knowledge sharing. We developed it as a tool for developing nations that can be modelled for the rest of the region. 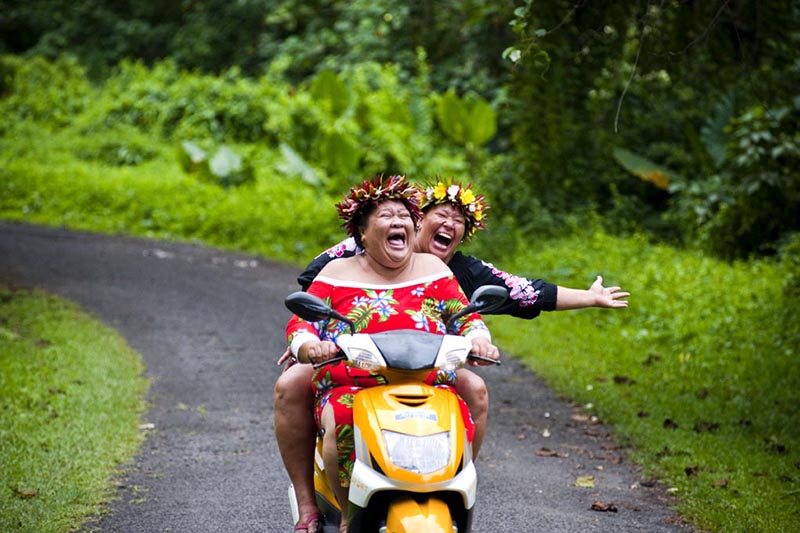 “The Cook Islands are more than just a beach and palm trees. It is all about the storytelling for us. We tell the story about the lagoon and conservation and are building an underwater marae or “meeting place” where tourists will be invited to help plant coral as part of our conservation efforts.”

Not only has conservation arrived in the Cook Islands, but feminism has too.

For a woman’s take on tradition, meet with one of the few female tribal chiefs in the Cook Islands, Tinoma Tokerau Ariki, the Queen of Puaikura, on Rarotonga.

Auntie Tinoma, who turns 80 this year, says she never dreamed that she would preside over a tribe of more than 500 people. 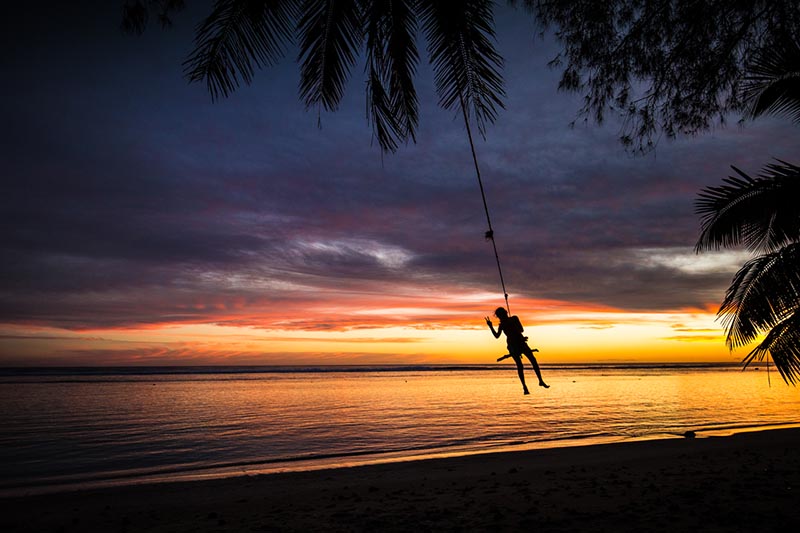 “It is up to the tribe to choose who they want as chief. It was common to have men before,” she says.

“It is a great honour to be chosen by the family. You name it, anything in the community and I am there whether it’s for women, men, church or sports.

“It is a lot of responsibility. You have to be humble to be a good chief.”

Dig a little deeper and explore the island interior with Tik-E Tours which operate eco-friendly electric tuk tuks. Join former prison officer Uncle Mata who will explain how the island is divided into three sections, named after three canoes. Cook Islanders have always been great seafarers, with seven canoes sailing for New Zealand in 1350 and bringing their culture to the Land of the Long White Cloud. 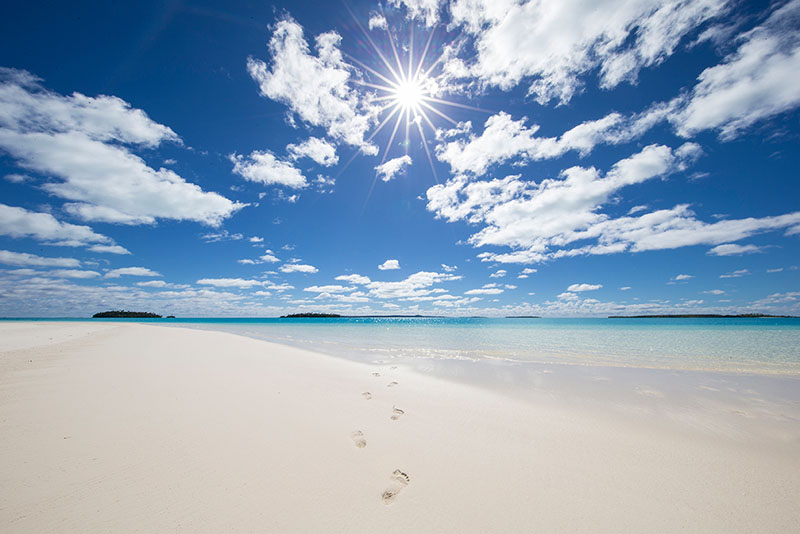 On this tour you’ll scoot past rows of island chestnut trees used as landmarks for tribes and encounter chooks, goats and birds along the way. There’s ruby red ginger plants and burnt orange bird of paradise flowers, avocadoes the size of small footballs, sweet bananas, and dragonfruit all flourishing from this rich volcanic soil.

“There is money on this island. My father always says ‘if you don’t get your hands dirty, you go hungry’. The backyard is our supermarket,” Uncle Mata says. 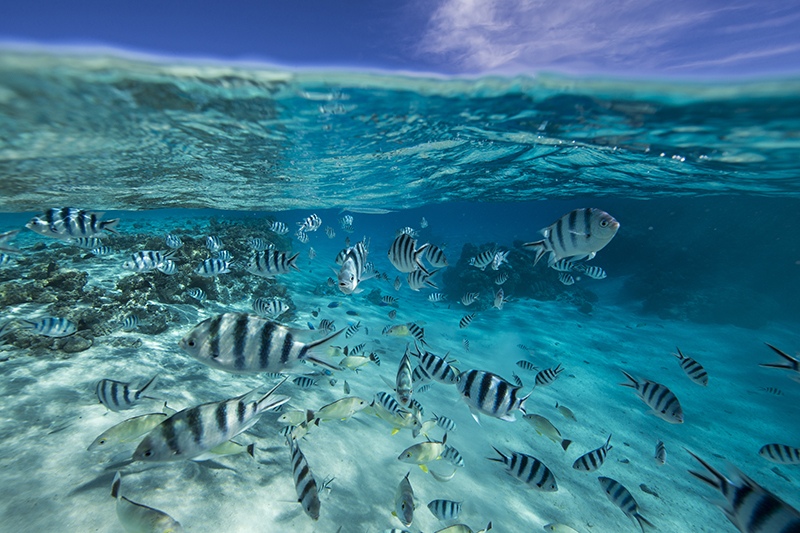 “Even though I lived in New Zealand for many years, if I saw a palm tree my heart just pounded. You can never take the island out of an islander.”

“They will go out into the world and then come back to their reef,” she says.

It’s a similar story over the remote island of Atiu, where Birdman George has been running bird tours of the island on which he was born and bred since 1999. So successful are his conservation efforts, he has managed to save two species of indigenous birds that were considered endangered. 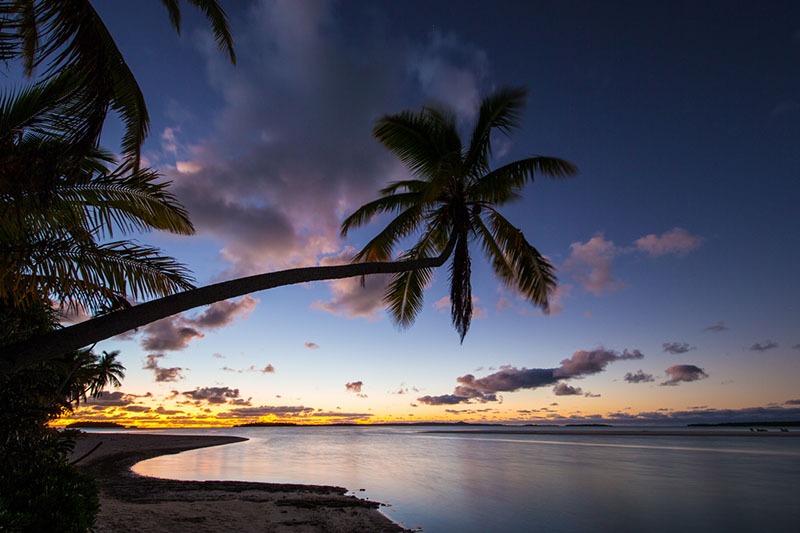 At Atiu Villas, Roger and Kura Malcolm built this tourism accommodation on a former pineapple field with everything made of local wood and villas featuring the grains of the mango, pacific mahogany, coconut, Christmas nut, coconut, cedar and acacia.

Visitors to Atiu are even invited to join a traditional bush beer gathering or tumunu where a $5 donation contributes to making tomorrow’s brew. The gathering itself stems from a kava ceremony and visits from the English whalers 200 years ago. The whalers didn’t particularly like kava and taught the island warriors how to brew ale from oranges.

The church, the police and the women of Atiu have been trying to stop the tumunu but it became legal to brew your own beer in 1987. Beer, which was formerly kept in the barrel of an old coconut tree, is now made in plastic containers of malt, hops, sugar, yeast and oranges, with an alcohol content of around 9 to 11 per cent. 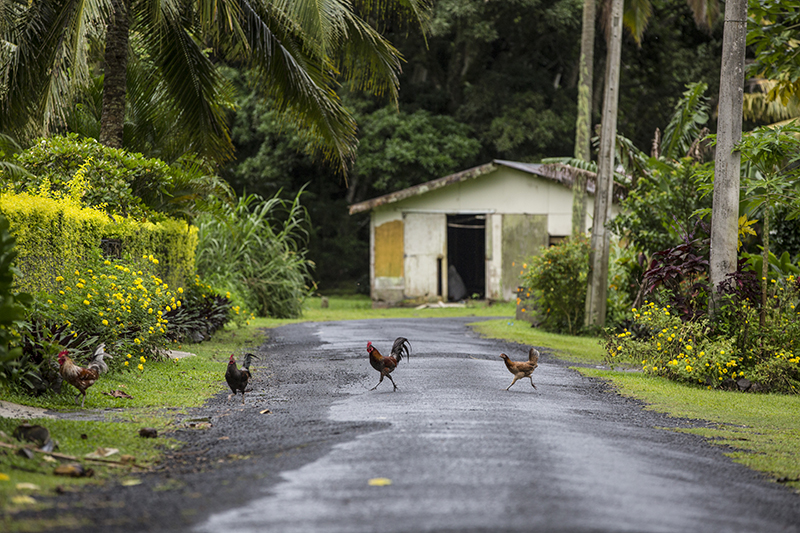 In a lime green shack, which looks a little like a bus stop, and under a bleating fan that sounds like the propeller of the 16-seater plane which brings guests to the island, Roger explains the tumunu etiquette.

“A good barman makes sure everyone gets drunk together and regulates the session. It is a pub but everyone is included all around the one barrel,” he says.

“If everyone is getting to a talkative stage the barman will tap on the barrel and calls everyone to order. A prayer will be said. 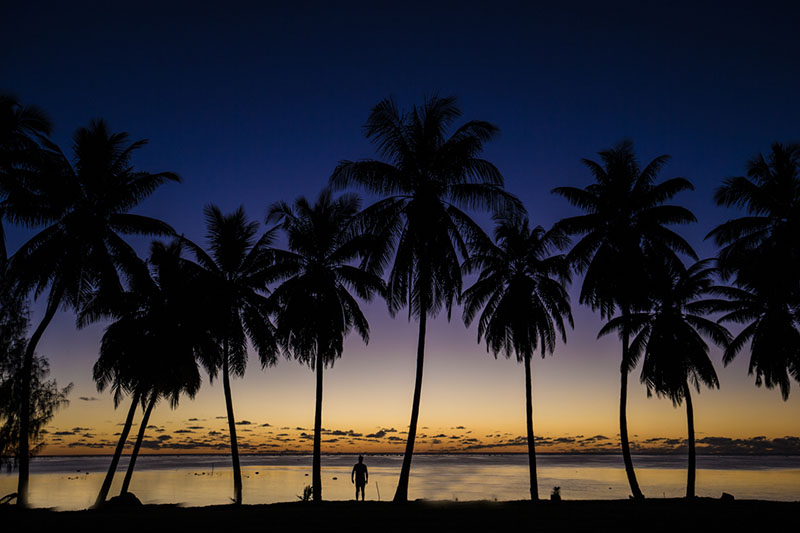 “When I came to this island 38 years ago there was a tumunu for women called “Mama Homebrew”. There were all these women sitting around a teapot and cup on the side of the road and it looked like they were just having cups of tea as it was illegal to drink back then.”

Wrap your head around the tumunu and your tongue around the language of the Cook Islands. While this culture has the same five vowels as English, islanders mouth the words in the most evocative, elongated way, like they’re singing rather than simply speaking.

And in the Cook Islands, there is just so much to sing about. • 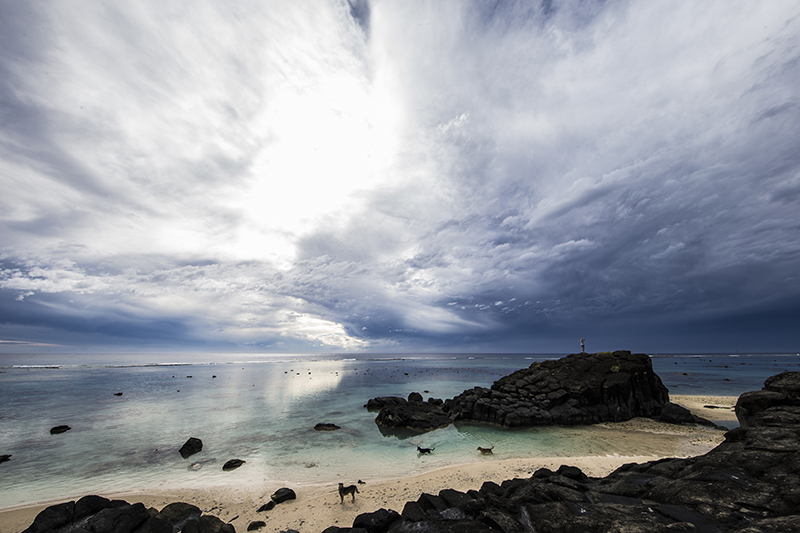