Australians love a good water adventure so it’s surprising that there is only one place in the whole country you can go coasteering.

Margaret River Adventure Co in WA is the first and only home to coasteering in Australia.

Get ready to rock-hop, shore-scramble, swell ride and jump into ocean waves.

Guide and founder Cam O’Beirne stumbled across coasteering in Cornwall, UK (that’s where it actually originated).

“I thought oh my gosh, this would be amazing. So I actually used my helicopter rescue skills to form a safety framework here in Australia, and then pioneer that down here in Margaret River,” Cam told Vacations & Travel.

Cam has 30 years of experience in aquatic rescue and ocean safety so you’ll be in safe hands.

Coasteering is suitable to absolutely anyone of all ages and abilities. You only need to be able to swim 25m unaided, the rest is in your head.

Cam recalls a particular low-skill participant, “She’d never worn a wetsuit in her life, she couldn’t swim very well either and she held my hand in a grip for two hours.”

“But she did eventually jump off the rocks. That’s what’s so great about coasteering it pushes people to do things they thought they couldn’t.”

Cam and his adventurers aren’t the only ones that think it’s an incredible experience.

“I actually thought it was a joke to start with, it was like yeah you’re a finalist. Then they rang me back saying I had won and I was blown away. It was very humbling,” Cam says. 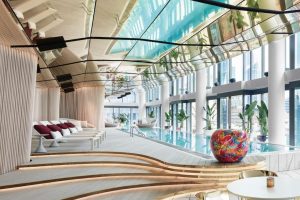 What to expect from the experience

Adventurers will meet at Ngari Marine Park in Margaret River. From there you’ll be fully kitted out in a steamer wetsuit, buoyancy vest, wetsuit booties and a helmet.

Following a safety briefing you’ll get scramble through the water and jump around the rocks as the current surges and ebbs. You’ll make your way across the natural canal on the other side of the granite rocks.

If you’re lucky enough you might see whales frolicking or sea lions basking on the rocks.

The session runs for two hours but if that isn’t enough for you Margaret River Adventure Co also holds full ‘Adventure Days’.