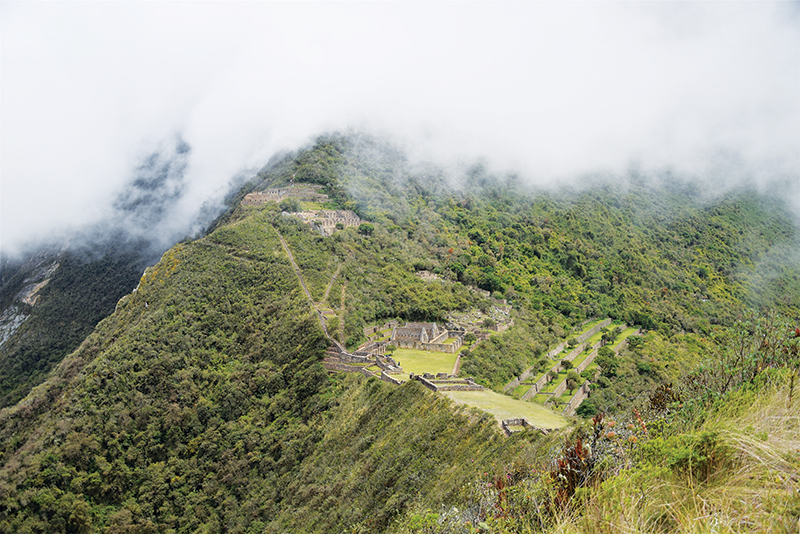 If a condor were to fly over the Peruvian Andes from Machu Picchu to its little-known “sister city” of Choquequirao it might take the bird about 30 minutes. But while that condor would look down on thousands of tourists at the former site, it’d struggle to count the visitors at the latter on its two claws. Julian Covarrubias, a 35-year-old farmer who lives alongside the path to Choquequirao, tells me there’s a simple reason for this.

“It’s natural selection,” he says. Those fit enough (and insane enough) to tackle the gruelling 45km roundtrip journey to Choquequirao are the only ones rewarded with their own private Inca citadel. But it’s a reward that comes with a price.

It’s my first of four days on the Choquequirao Trek and I’ve already tackled 2,000 metres in elevation change. I’ve wobbled around thorny cacti on a cliff-hugging path from Cachora (3.5 hours west of Cusco), descended into the wind-blasted Apurimac Valley, crossed the orange-brown Apurimac River and climbed up a vertical desert under an unforgiving afternoon sun. All of this for the chance to set my eyes on a forgotten Inca treasure that archaeologists believe may be three-times the size of Machu Picchu.

Choquequirao (a Quechua name meaning “cradle of gold”) is so remote, so far up in the Andes, that Spanish conquistadors never found it. It doesn’t appear in any colonial-era texts and, to this day, only 30 per cent of it has been freed from a cloud-covered jungle.

“No one really knows the true story of Choquequirao,” says Covarrubias, who fashions himself as a local historian. Sitting on a patch of flat land the crippled farmer rents to campers in the three-hut village of Santa Rosa, he explains that Choquequirao was probably the last refuge of the Inca as the empire crumbled and royalty fled Cuzco during the 40-year uprising against the Spanish. But it might also have been an administrative hub and ceremonial centre linking Cusco with the Amazon. Or perhaps the royal estate of Túpac Yupanqui, the 10th ruler of the Inca Empire.
The answers, it seems, remain buried beneath a tangle of vines. 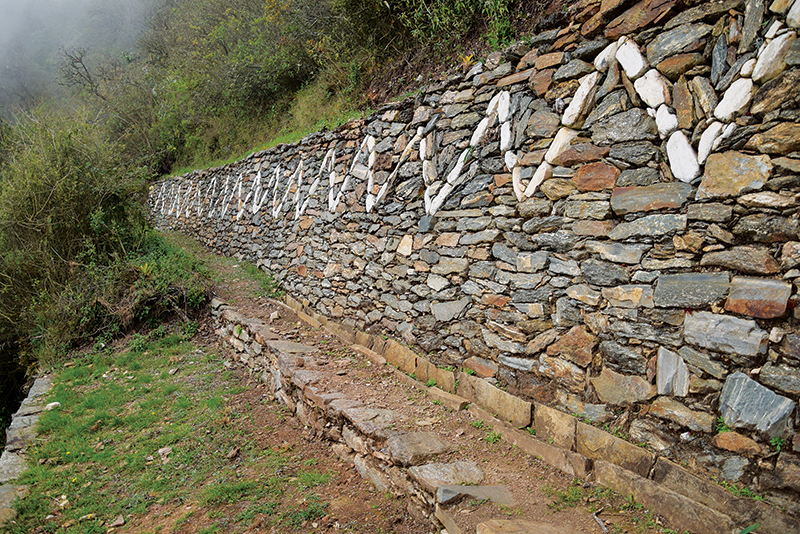 I peel off my sweat-soaked trekking shoes later that evening to relax under the shade of an avocado tree. In the distance the 5,000-metre peaks of the Willkapampa range stretch toward the horizon like the spine of a stegosaurus. The privileged view surely played a key role in the Inca’s decision to establish a hidden outpost in these faraway hills.

I’ve rented a pack mule to carry my gear and it hoofs into camp with my guide Jesus Aguirre of Trekking Choquequirao, who whips out our tents and expertly snaps them together. He then disappears into a labyrinthine vegetable garden and re-emerges 10 minutes later with bulging frog eyes and big news. On the far side of our scrub-covered plateau, about 300 metres away, he’s spotted something even locals rarely see: a spectacled bear.

With its stubby light-brown face and furry black body, the spectacled bear (the only bear species found in South America) looks decidedly more teddy bear than ferocious beast. Nevertheless, we swap binoculars and watch closely as it manoeuvres a safe distance away from our camp. Only then do we retire to our tents for some much needed rest.

I manage just a few hours of shut-eye before Aguirre nudges me awake at 3:15 am and hands me a present. “It’s coca tea,” he explains of the scalding cup and its bobbing leaves. “Drink up; you’ll need the energy.” 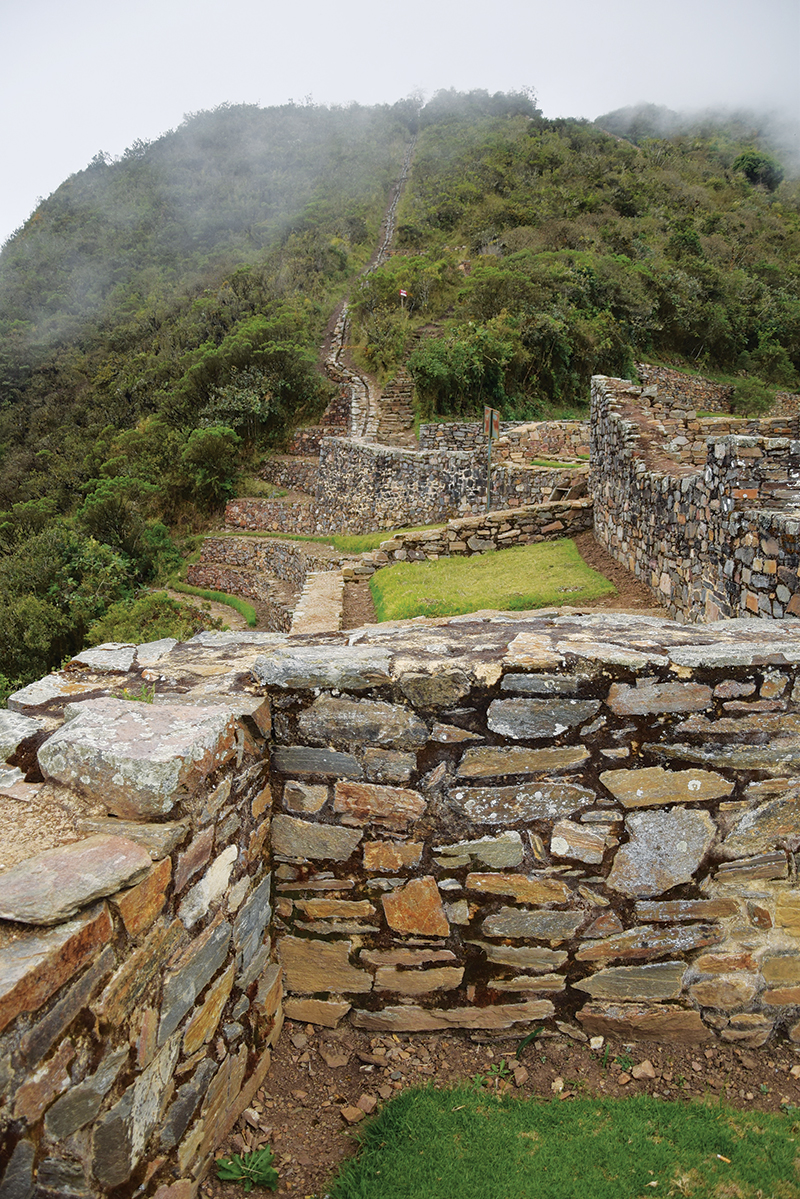 Mildly euphoric from the tea – which contains the leaf used to make cocaine – I begin my 1,500-metre ascent to the mountaintop citadel. The first hour is a dizzying jaunt up endless switchbacks under the scant light of a waning moon. The air, once crisp and dry, becomes increasingly thick as the scrublands give way to a humid high altitude jungle.

I reach a clearing with a solitary cow and stumble into the mountaintop village of Marampata just as the sun peeks over the valley walls, infusing the morning sky with a purple haze. Marampata is the largest town I’ve laid eyes on since departing from Cachora, and its size and location come as a complete shock. We’re now two days from the nearest road and here’s a village of nearly 100 people that’s 3,000 metres above sea level and completely cut off from civilization.

Duelling roosters and the smell of wood-burning stoves signal the start of a new day much like the last for Marampata’s ageing denizens. As the de facto gateway to Choquequirao, Marampata houses the park’s humble headquarters: a tiny shack that sits at a strategic point on the far end of town where the archaeological site’s tumbling terraces finally come into view. I pay a hefty entrance fee ($15) and follow a winding two-kilometre path around the Chunchumayo Gorge before the rest of Choquequirao manifests itself in the hills above.

My arrival at Choquequirao is unlike any I’ve experienced at other historical sites. It’s not the altitude that overwhelms me; it’s the solitude. Silence is a virtue far too often missing in the modern day experience of our world wonders, but at Choquequirao, you’re left only with the voices in your head whispering wild whims and half-remembered factoids.

Abandoned in the mid-16th century, this Inca city’s existence was known about for more than three centuries before restoration and preservation began in 1992. In fact, it was a mapping and surveying trip to Choquequirao in 1909 that inspired Yale professor Hiram Bingham to return to Peru in 1911 for the archaeological investigation that led him to re-discover Machu Picchu.

Modern archaeologists believe Choquequirao was modelled after (and geo-cosmically placed in line with) its more famous ceremonial sister, with a temple and administrative buildings positioned around a central square and living quarters clustered further afield. A high level of sophistication is evident in the gabled ceremonial halls, stone “refrigerators” and elaborate irrigation channels hewn into rock. 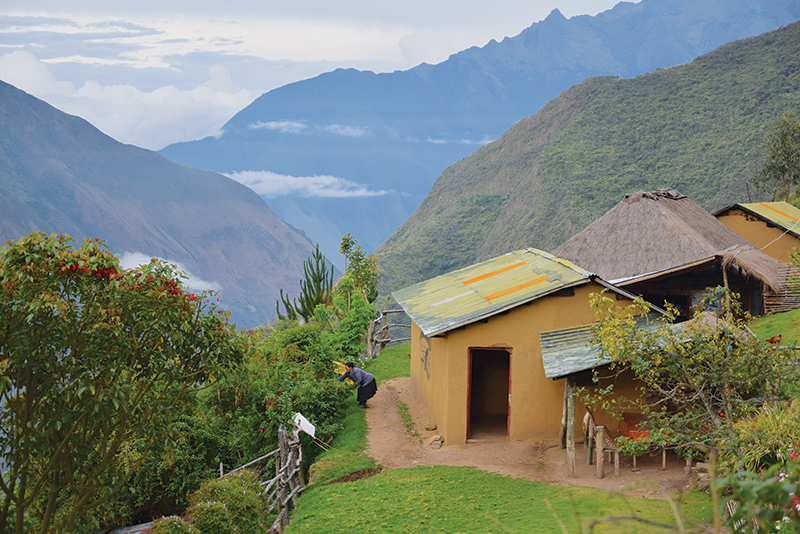 Draped across three hilltops and 12 sectors, the site is much more sprawled out (and less immediately photogenic) than its older counterpart. A set of stairs down from the main plaza leads to the most iconic sector: a set of terraces decorated with a mosaic of white rocks in the shape of llamas. An even longer path leads to the Casa de Cascada cluster, where stone buildings perch on a cliff next to a spectacular waterfall.

Absorbing it all from the uppermost plaza I watch as clouds whip up over the mountain ridge, obscuring the ruins below and thrusting the temple directly in front of me into a whiteout. I sense a palpable energy radiating from this lonely relic.

You can’t help but feel a rush of excitement, of Indiana Jones fantasies, as if you’re discovering something undiscovered – which, in a way, you are. Choquequirao may reveal itself in bibs and bobs, but the vast majority remains firmly tucked into a jungle quilt.

Imagine what it must have been like to visit Angkor Wat, Chichen Itza or Machu Picchu a century ago before the modern conservation teams, the roads and the tour buses arrived. This is what it’s like to set foot at Choquequirao – but it won’t stay that way much longer.

Choquequirao’s prized tranquillity could be a distant memory as soon as 2017 when, if all goes according to plan, the Peruvian government will unveil a shiny $50 million cable car system transporting up to 3,000 visitors per day to this lesser-known “lost city.” The hope is that it can shift some of the tourist burden from Machu Picchu.

The cable car would depart from the hamlet of Kiuñalla on the far side of the Apurimac Valley and cut the roundtrip journey from four days on foot to just 30 minutes in air-conditioned luxury. Even if the cable car never takes off (the project has been halted several times), there’s already a road under construction that will drop tourists at a riverside campground at Playa Rosalina, cutting the trip from four days to just two.

I catch up with Covarrubias the next day after a knee-crunching descent back to Santa Rosa and ask the chatty farmer his thoughts on the possibility of Choquequirao opening up to the wider world. He’s quick to remind me he’s a fifth generation resident of these hills. All of the neighbours are relatives. They’ve survived rough weather and tough times, like the occupation by Shining Path guerrillas during the Maoist insurgency of the 1980s. They’ve learned over the years that they only need to rely on each other and they’ll have the bare necessities.

“We get oil from pig’s fat, eggs from the chickens, fish from the river, sugar from the sugar cane, and fruits and vegetables from our farms,” he explains. “When you have equilibrium you’re not poor, so we don’t need this economically. We don’t need cable cars soaring over our homes.” After all, he adds, “What would our Inca ancestors think about that?” •

GETTNG AROUND
Cachora (starting point for the Choquequirao Trek) is 3.5 hours west of Cusco and accessed either by public bus or taxi. Many guided treks include private transport to and from Cusco.

WHEN TO GO
May to October is dry season, though daily showers aren’t uncommon any time of the year.

WHERE TO STAY
Cusco is overflowing with fantastic hotel options, but if you plan to spend a night in Cachora on either end you’ll have the pick of just two: CasaNostra and Casa de Salcantay. Both are expat-run B&Bs with spectacular valley views.
• CasaNostra (Trekking Choquequirao): +51-95/834-9949; choquequiraotrekk.com
• Casa de Salcantay: +51-98/428-1171; salcantay.com

CHOOSING A GUIDE
Billed as one of the tougher treks in Peru, it’s highly recommended that you do the journey with an experienced guide. Those with a lower degree of fitness should consider hiring a horse to ride on tougher sections. The B&Bs in Cachora offer tents and trekking gear and can arrange sturdy mules, horses and decent guides at about half the cost of companies in Cusco. If you want a more bespoke adventure with door-to-door service from Cusco, try BioAndean Expeditions or Apus Peru.
• BioAndean Expeditions: +51-84/227-118; bioandeanexpeditions.com
• Apus Peru: +51-84/232-691; apus-peru.com