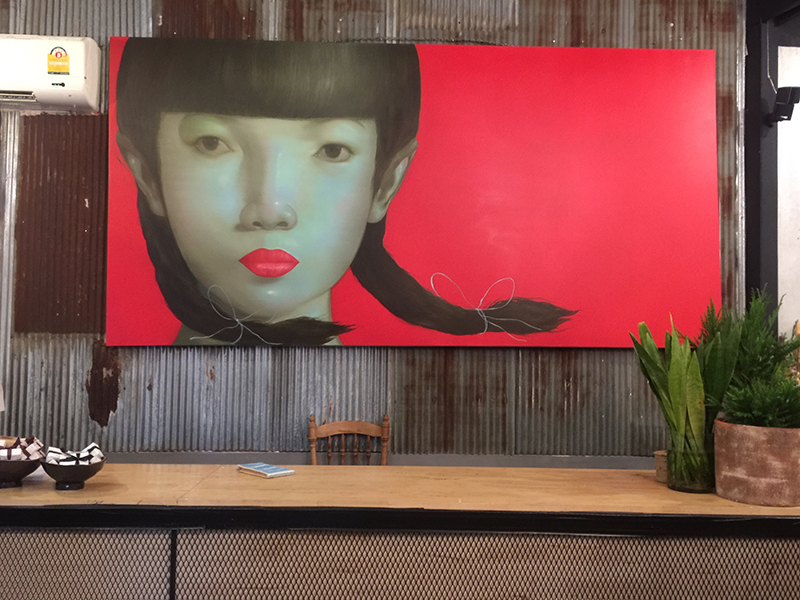 Thailand’s ‘Rose of the North’, Chiang Mai, offers the best of the Bangkok experiences – the markets, the mega-malls, the scrumptious food, the elegant temples – with an easygoing charm and cultural heritage thanks to its 700-year Lanna history.

Increasingly, what sets Chiang Mai apart from other cities in Thailand and South East Asia is its thriving arts scene. From the new shoots of creativity produced by thousands of art students learning their crafts at the city’s universities, to world-class museums displaying local and international works, this is a place that lives, breathes and honours art and design. 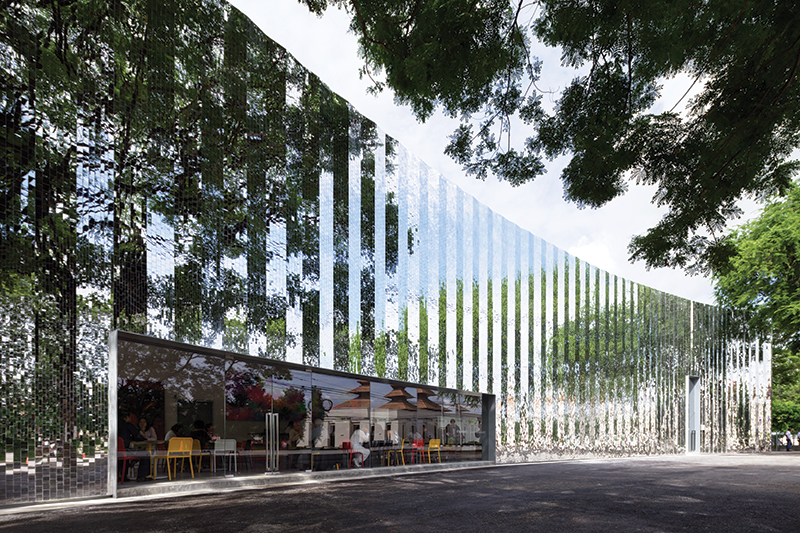 The number of galleries and art collaborations is growing so rapidly, new mapping initiatives have emerged as a result. The Chiang Mai Creative Mapping project has developed recently; an interactive map and database of craft makers, designers, artists, galleries and performance spaces. In a similar spirit, the Chiang Mai Art Map is a free annually updated guide and website produced by CAC, Chiang Mai Art Conversation.

Earlier this year, MAIIAM Contemporary Art Museum opened to great fanfare and the art darlings have not stopped raving ever since. Mentioned in the same breath as New York’s Whitney Museum and the Pompidou Center in Paris, MAIIAM’s eye-catching exterior is composed of thousands of decorative mirror tiles that reflect light. Inside, the private collection of the Bunnag-Beurdeley family – amassed over decades – is on permanent display, alongside changing exhibitions that challenge and delight visitors.

Shana Kongmun, editor of Chiang Mai Mail, the city’s first English language newspaper, says the atmosphere is very conducive to creativity. She names the Chiang Mai Art Museum, part of Chiang Mai University, as one of her favourite spots for exhibitions and workshops. 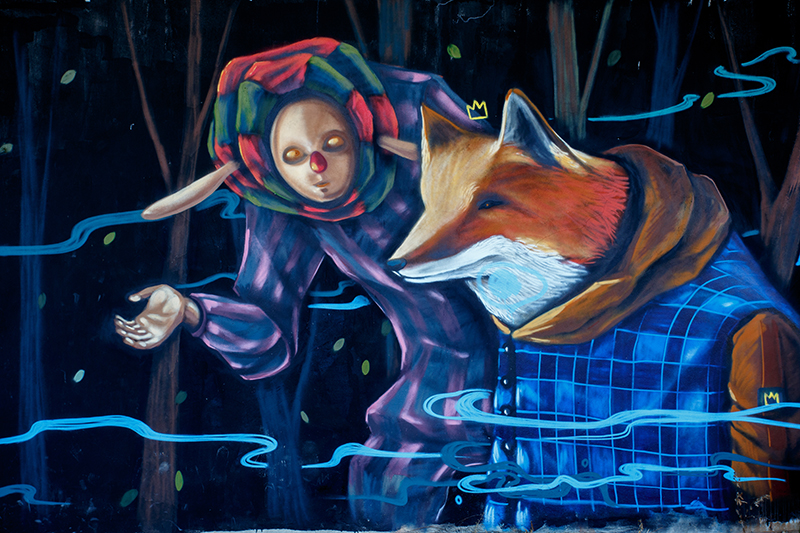 “The art scene has definitely grown, and there seems to be more of an emphasis on contemporary,” she says. “I’ve also seen many more national and international artists come and exhibit and even take up residence.”

Kongmun says the city’s emphasis on art and design can be traced to a variety of factors, starting with its rich history of arts and crafts.

“Add into that mix quite a few universities, the draw of the slow life of Chiang Mai to artists, a plethora of galleries and a government that encourages the creative side, and I think it makes it a cluster of creativity,” she says. “Chiang Mai has a strong art community and many organisations that help support that community. That draws other artists which in turn, of course draws even more.” 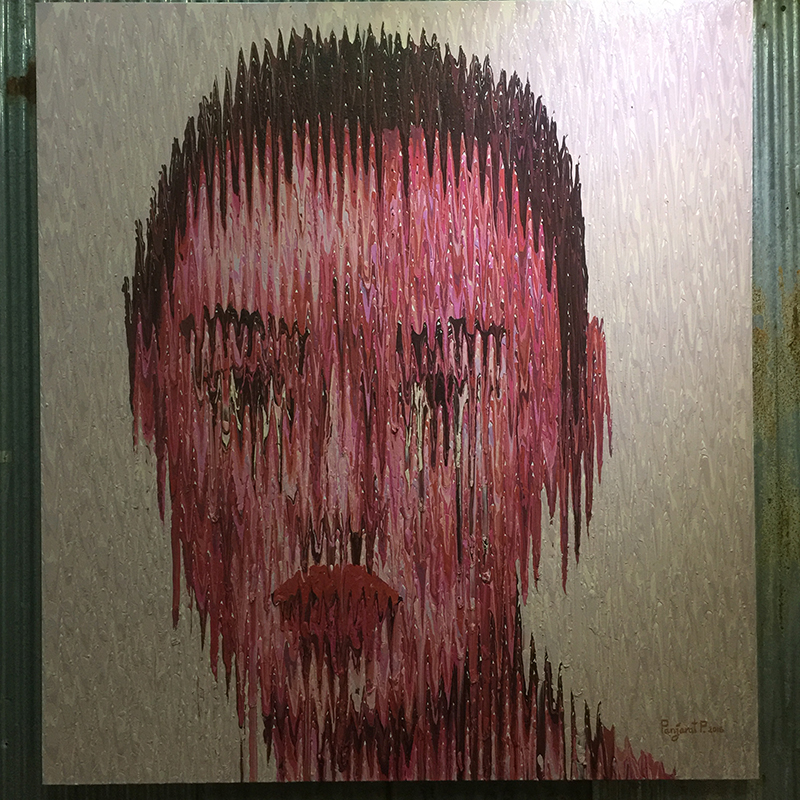 In the Nimmanhaemin district and areas surrounding it, galleries of all sizes are sprouting like mushrooms, displaying the works of local and international artists. Expect to find handmade jewellery, ornate furniture, bold and beautiful paintings, breathtaking photography and delicate works on paper at galleries including Gallery Seescape and Sangdee Gallery.

Visitors love the trendy cafes and boutiques lining the laneways of Nimman, as it’s known. At the end of 2015, the gorgeous all-suite boutique hotel akyra Manor opened its doors. An art-focussed property, the hotel features animal sculptures throughout its public spaces, sells artisanal wares in its curated gift selection and will happily arrange a guided tour of local galleries.

The hotel’s own walls serve as an exhibition space for Chiang Mai artists. For the ambitious or curious novice student of the arts, akyra Manor’s team will organise private lessons in various styles of arts and crafts. Esteemed academics from nearby universities come to the hotel to share their knowledge in the finer aspects of woodcut printing, sculpture-making and painting with watercolours. A self-made souvenir is a delightful way to remember a holiday. 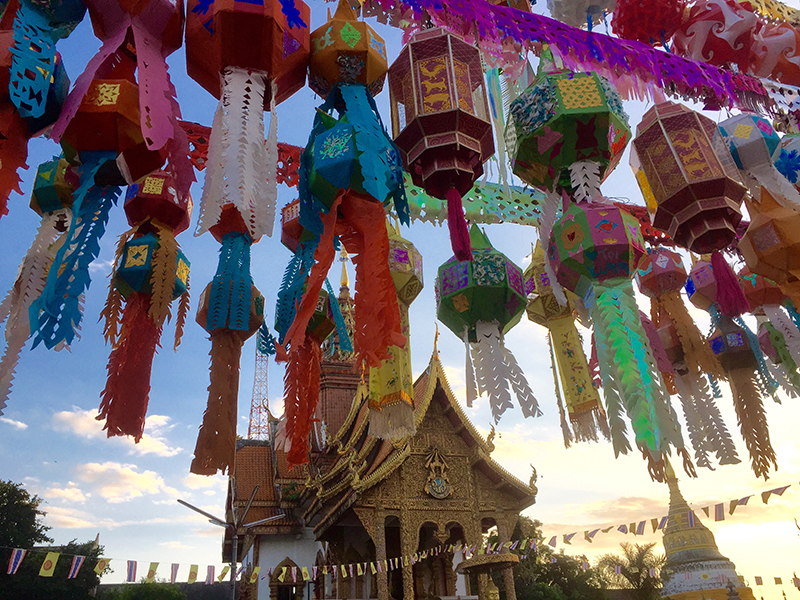 The hotel is located in the very centre of Nimman, and just a couple of blocks from Maya Lifestyle Shopping Center, a popular mall. Down the road from Maya, a cluster of art galleries draws on the talent of students from nearby Chiang Mai University (CMU).

At the unmissable Sunday Walking Street Market in the old city, CMU art students and craft hobbyists give Etsy a run for its money at a fraction of the price. Hundreds of stalls offer market delights including one-of-a-kind woodblock prints, Buddhist-influenced paintings, handmade lamps and delicately sewn slippers. 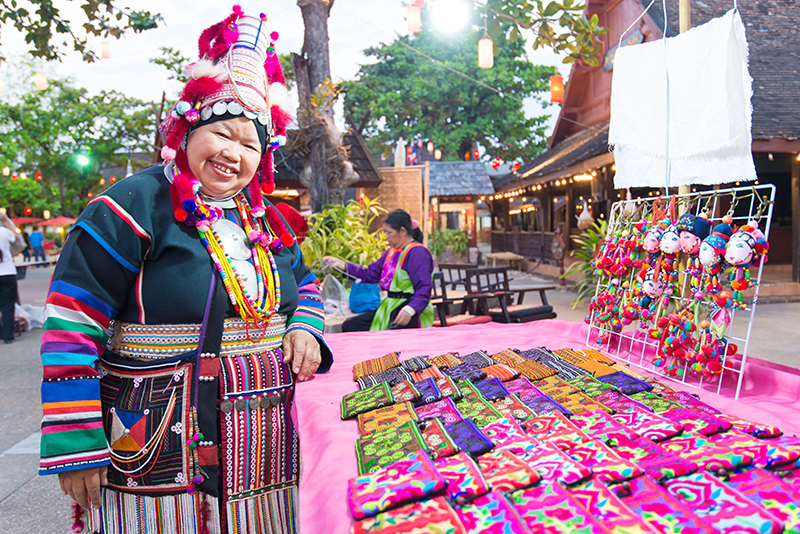 “Chiang Mai has always been an arts and handicraft center for Thailand,” says Tim McGuire, who is injecting new life and colour into the offerings at Old Chiangmai, an event, performance and market space dedicated to traditional Lanna Thai culture. “We are interested in keeping the old forms alive. We plan to offer pottery classes, weaving classes and fabric-dying in the old methods to anyone interested in learning.”

“Lots of the weaving originated with the hill tribes in the north and Lamphun has long been the wood carving area with ceramics coming from Lampang,” McGuire says. “All these products came together in Chiang Mai as the biggest city in the area and they attracted others interested in the arts. It has since evolved to include contemporary as well as fusion techniques.”

In May 2016, Old Chiangmai approached 17 street artists to paint a mural on a 70-metre blank wall at the centre. The site has since been visited and photographed thousands of times. 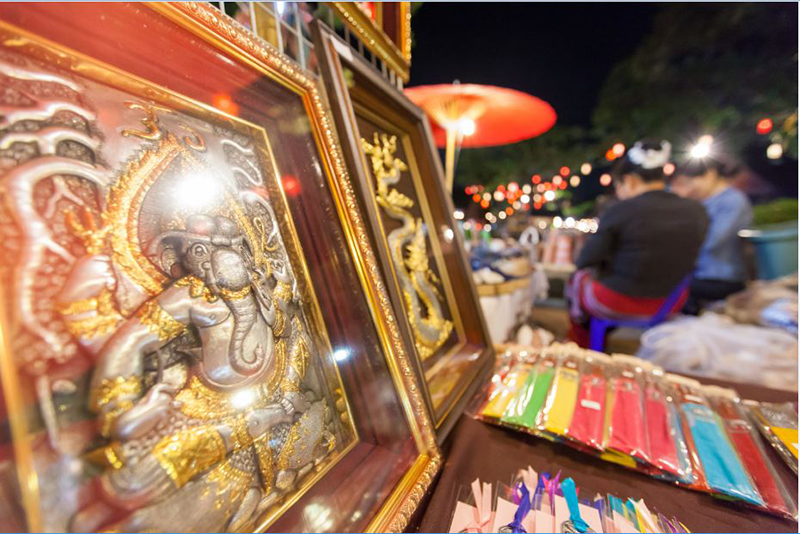 “I recognise street art as a valid art form and I wanted to give the local artists an opportunity to show their talent in a safe, permanent location where they could relax and didn’t have to tag and run,” McGuire says.

Singapore-born, Chiang Mai-based artist Lili Tan was instrumental in bringing the street artists together. She says many artists who are living and working in Chiang Mai are exceptionally collaborative. She chronicles much of the city’s street art on Instagram in addition to creating her own whimsical, beautiful pieces that are prized by collectors as far afield as Sweden and New York.

“There’s a support and encouragement we give to each other here,” she says. “Artists can be private and not want to collaborate but I don’t find that here. Many very well-known international artists are quietly living here and going about creating their art that is then bought by galleries and collectors all over the world. For a city this size there is a disproportionate number of well-known, successful artists. Because the cost of living is so low, artists and art students can focus on their art.” 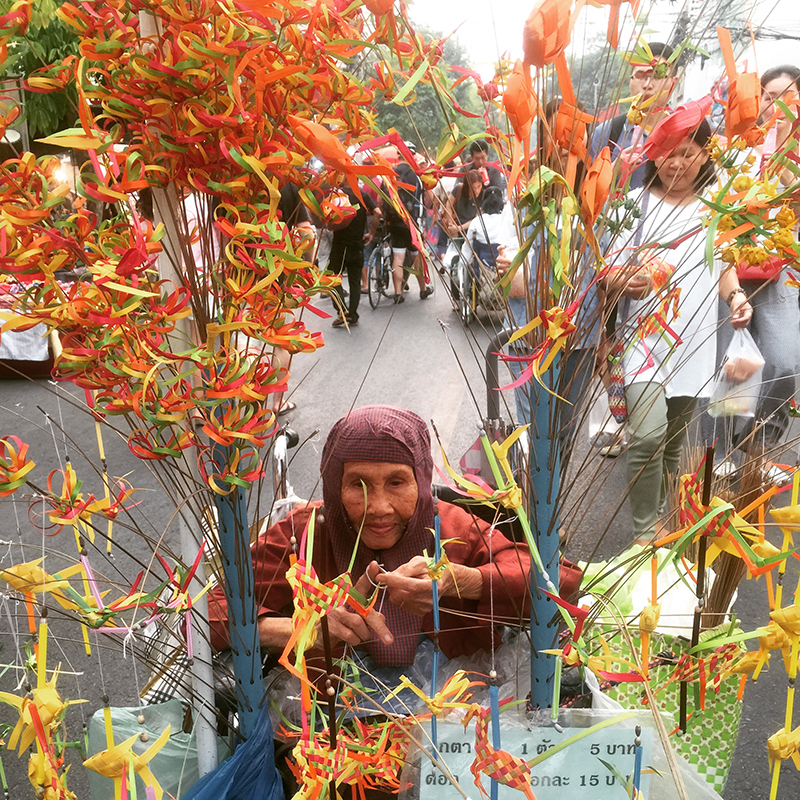 Tan, who moved to the city in 2010 in search of new inspiration, says colourful street art makes a “huge difference”.

“Street art needs to be seen and it is definitely becoming more of a thing here as we start to see more murals around town,” Tan says. “It feels like the art scene has gone more contemporary in the past few years. Earlier on it was more Buddhas and traditional art, now we’re seeing more abstract art. The opening of MAIIAM is a big shot in the arm for contemporary art in this city, it puts Chiang Mai on the map.”

While it might take many visitors a second or even third visit to the Kingdom of Thailand before they hop on the one-hour flight from Bangkok to Chiang Mai’s International Airport, once they do, most return again and again. Rapid modernisation and increasing popularity has brought with it more and better shopping and dining options, increased international flights and a spirit of energised creativity. Whether slurping on the local noodle soup or seeking out the perfect piece of take-home art, this is a destination sure to excite the spirits. • 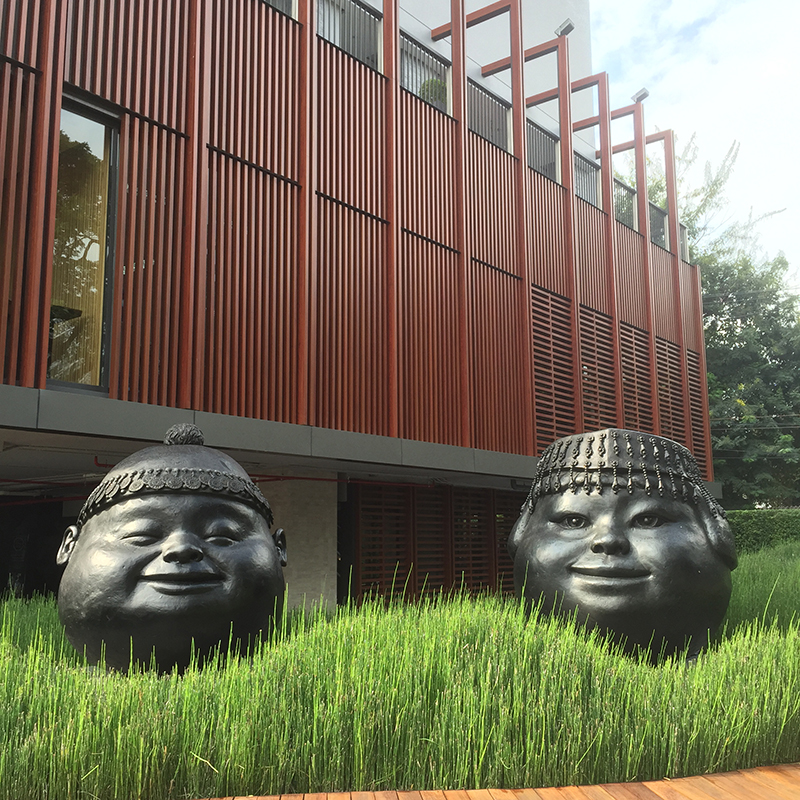 Where to stay
• akyra Manor is a five-star, all-suite boutique hotel in the heart of the Nimman arts district. A changing roster of exhibitions brings high-quality local art within reach of guests. theakyra.com
• Ibis Styles is a fun and affordable family hotel near Chiang Mai University. Modern art decorates the lobby and public spaces; look out for the disco lights display at reception. ibis.com
• Anantara Chiang Mai Resort is a spectacular luxury property on the banks of the Ping River. Its dreamy blend of contemporary, Thai and colonial style is complemented by a fabulous spa and restaurants.
chiang-mai.anantara.com

When to go
• Low season (May to October) is considered rainy season, though the rain might only last an hour or two each day. High season (November to February) coincides with cooler temps and Australian school holidays. Expect crowds and higher hotel prices. March and April are very hot and dry, with an increasingly dire smog problem caused by the smoke from fires set by farmers in preparation for planting season.

Things to do
• Check out current listings, artist profiles and gallery descriptions, including Seescape Gallery and Sangdee Gallery. chiangmaiartgallery.com
• Pick up your own Li Li Tan original painting here. The pieces are whimsical and beautiful. lilitanartgallery.com
• Visit the site to learn more about regularly scheduled craft markets, exhibitions and art classes. Once you get to Chiang Mai, check out the 70-metre wall painted by local street artists. oldchiangmai.com
• MAIIAM Contemporary Art Museum is one not to miss for lovers of contemporary art. maiiam.com
• Chiang Mai Art Map lists galleries, spaces and people in the know. cac-art.info