Bear down for cancer.

Founder of Project 365 and Kindness Cruises, 13-year-old Campbell Remess, has been named the P&O Cruises Homegrown Hero of the Year.

Through his generosity of spirit in helping and inspiring others in need, Campbell has captured the imagination of millions of people in his home state of Tasmania, across Australia and around the world.

Campbell was only nine years old when he started to make Christmas gifts for children in hospitals. Now in his fifth year, Campbell has made thousands of gifts that he sends to hospitals and to people in need worldwide.

He has also created his own charity (Australia’s Youngest CEO) where he gifts ‘Kindness Cruises‘, offering holidays on cruise ships to nominees who are battling cancer to help them relax and regroup after the cancer experience. 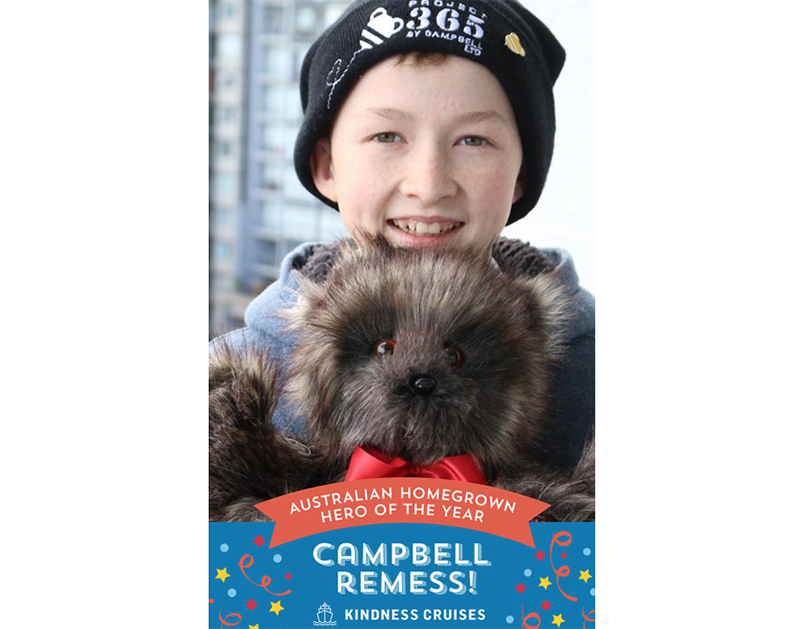 “Over the past year, we have had the pleasure of getting to know Campbell and his mother Sonya as Campbell’s Kindness Cruises initiative has developed,” P&O Cruises and Carnival Australia president Sture Myrmell says.

“Campbell is as modest as he is selfless and we thought honouring his efforts in this way was a fitting tribute to him from Australia’s homegrown cruise brand on Australia Day.”

“P&O has been a great support to Kindness Cruises and we are so pleased that Campbell has been honoured in this way,” Campbell’s mother Sonya Whittaker says.

“I watch Campbell work so hard and so selflessly day in and day out to follow his heart and it is amazing for me as his mother to see Campbell honoured by P&O and by our community.”

Campbell is now fundraising to help to fund a research scholarship at the Menzies Centre in Hobart to have a hands-on researcher working with him and his Project 365 Family to achieve his goal of finding cures for cancers.

This inspiring Year 8 student is also a junior volunteer firefighter (in his spare time) and trains each Tuesday. In February, Campbell will be a proud representative for Tasmania as a Queen’s Baton Bearer for the Commonwealth Games.

P&O’s Australian Homegrown Hero of the Year award will be presented to Campbell when he travels as a special guest on an upcoming P&O cruise.