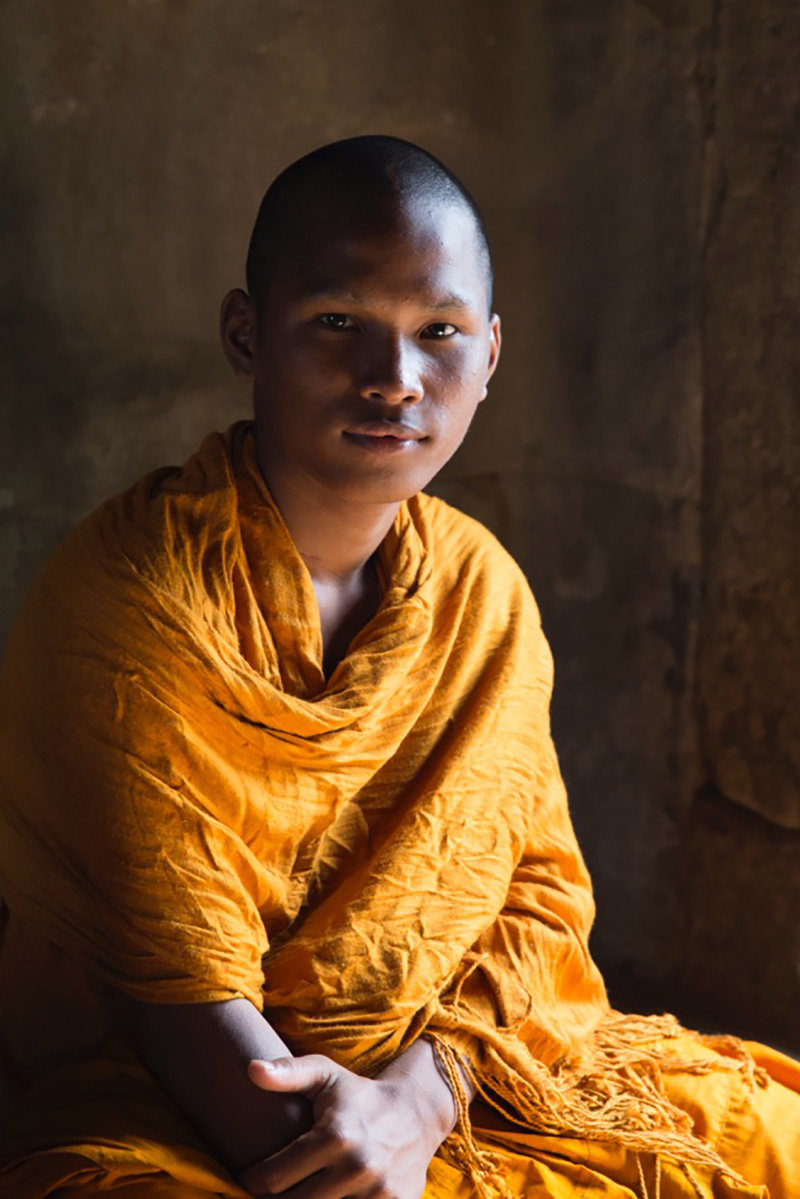 With one sharp kick ‘riel’ notes scatter across the ground. There’s a cheer, followed by high fives. We’re watching a game of skill – a cross between marbles and pool. Only the cue is a foot and the ‘tom bowler’ a thong. The rules are complicated. Each competitor focuses on knocking an opponent’s thong out of the way to win the right for a shot at the kitty. Nearby a group of girls giggle uncontrollably. They’re playing a jumping game with a ‘rope’ made of elastic bands neatly crafted together. Innovation runs deep here. Towering behind us is Bakong, one of the earliest temples built by the Khmer. We’re less than 15km from Siem Reap, and yet we’re the only foreigners here, sharing a morning with local kids playing in their ‘backyard’.

Tourism in Cambodia continues to blossom at whirlwind speed. More than two million tourists a year vie for the iconic dawn selfie at Angkor Wat, the largest religious structure on the planet. To see streaks of colour paint the sky as the lotus towers emerge from darkness and reflect in the moat is a must do. But with thousands of temples scattered throughout the country, it’s also possible to be virtually alone amidst hundreds of years of mind-blowing architecture. It takes a plan, time and a local guide.

“So you want to do the opposite to everyone else?” says Chansarak Nuon (Sarak) in perfect English flashing his signature easy smile. “I’ll show you temples very few people go to.” There are over 5,000 registered guides in Siem Reap and I’m glad we’ve chosen one on the same page as my husband and I. In the lead up to our trip, I corresponded with Sarak via email after a recommendation from a friend. Sitting in his air-conditioned car, my hair plastered flat and sweat trickling down my back, I’m relieved we opted to book a guide for our five days in Siem Reap. Each day Sarak and his driver Viseth, punctual to a tee, pick us up from our hotel and drop us back in the evening.

It’s the wet season so that’s the first thing in our favour. “We have less tourists now even though it’s the prettiest time,” says Sarak. It’s also the most humid. From the car to a temple is like stepping from a fridge into a sauna. The usual temple trail route is about light, the way it falls on the intricate bas-relief carvings and decorative lintels. All beautiful, but to avoid being swept along the long stone pillared corridors in a wave, something needs to give. Timing is everything. 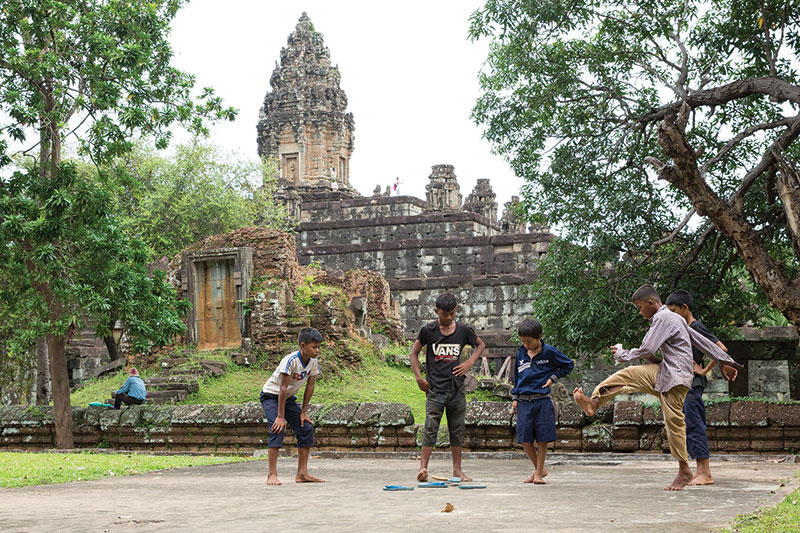 We arrive at the much loved Ta Promn, (often called the “Angelina Jolie Temple”), at 7.30am to an almost eerie silence. Built in the 12th century as a dedication to the mother of Jayavarman VII it was once home to 12,500 people and a place of worship for the surrounding villages. It now stands in ruins crumbling into the arms of strangler figs. Carpets of lichen and moss spread over the walls hiding the bas-reliefs and massive stone blocks lay piled up like discarded children’s toys. Swallowed by the jungle.

The ‘Tomb Raider tree’ made famous by Jolie’s character, Lara Croft is one of the most photographed spots in Cambodia. “By 11am people will be queuing up to get a shot here,” says Sarak. Except for two monks wandering through the narrow corridors bathed in morning light, we’re alone. However, Sarak is right. As we leave buses start rolling in. To experience Angkor Wat without the hordes is a little more difficult. Every day thousands of tourists flock through the west gate, the traditional grand entrance. We enter via the east gate at lunchtime. With no wind the steamy air is oppressive and my feet squelch in sweat-filled sandals. I feel like an amphibian. But it’s worth it. I’m grateful for the cool box filled with cold water and snacks Sarak carries with us. While the masses are lingering over a fish amok in Siem Reap restaurants, we spend four hours wandering the relatively uncrowded galleries and corridors.

Our plan for Angkor Thom is similar. Built in the 12th century, after Angkor Wat it’s hard to believe anything could be bigger and in some ways more extraordinary. As the Khmer capital, in its heyday the population of the 10 sq km walled city was around one million. We start at the Elephant Terrace in the slightly cooler early morning air. Once a viewing platform for kings, the 300-metre-long sandstone wall carved with hunting scenes of elephants with their mahouts glistens in dappled light. Behind the terrace is the Phimeanakas a layered solid mass of stone amongst the trees. We leave exploring the Bayon temple until early afternoon. Here giant smiling faces carved out of stone watch over us as we wander the maze like galleries and corridors lined with bas-reliefs featuring dancing apsaras and fine inscriptions. By the time we reach the popular South Gate most people have left and we hang out on the wall soaking in the ambience. 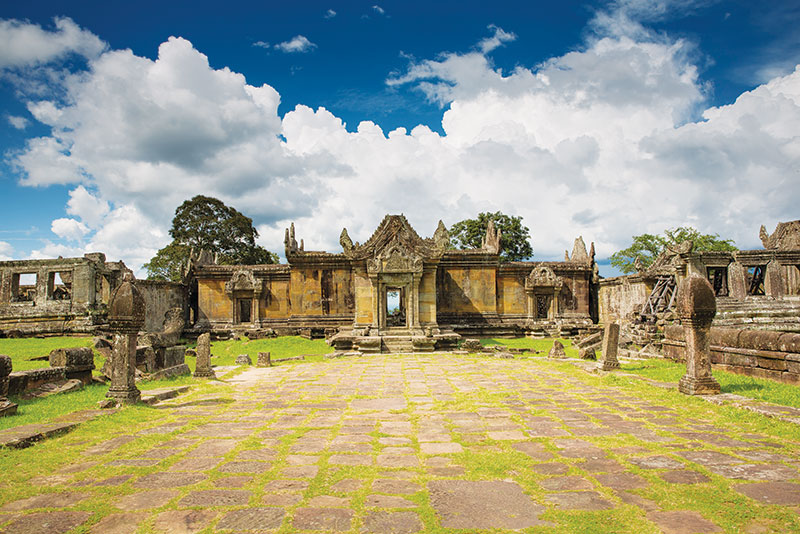 As we start to venture further afield it becomes easier to have a temple all to ourselves. less than an hour north is the exquisite Banteay Srei, meaning ‘Citadel of Women’. Different from the other temples, the stone is deep pink and looks sundrenched even under clouds. This is Sarak’s favourite temple and he guides us excitedly through the highly decorated intact enclosures and gopuras (gates). “It’s believed these carvings are so delicate they must have been done by the small hands of women.” With every available surface of stone intricately sculpted it’s considered the jewel of Khmer art.

Another day we head two hours northeast from Siem Reap to the Koh Ker. From 928 to 944 this area was the grand capital of the Khmer empire. Today we’re amongst a handful of visitors. Within the vast area we drive the ‘temple loop’ and spend time at the four major sites. The temple of Prasat Pram is intimate and atmospheric. Hidden in the jungle, the three sanctuary towers and two
libraries are draped in tree roots and wrapped in vines. One doorway is even completely blocked by a bulging termite mound. A mother and her young child come to worship. Holding hands they walk between the sanctuaries pausing at each entrance. Their chanting is sweet and melodic and the heady scent of incense fills the air.

A couple of kilometres away is the main temple of Koh Ker, Prasat Thom. Beyond the lichen-covered wall stands a perfectly shaped seven-tiered 40-metre-high grand pyramid. With greenery hanging from each level it looks like a terraced garden. It’s hard to believe people used to walk up and down the now collapsed near vertical stone steps and when Sarak suggests we go to the top I think it’s another of his many jokes. But within minutes we climb a solid wooden staircase hidden at the back of the structure that was built for a recent film. From the top the view is stunning – shades of emerald to lime merge into a sea of green.

On the way back to Siem Reap we stop off at Beng Mealea, a temple that rivals Ta Prohm as the most-Indiana Jones- esque. Built in the same style as Angkor Wat, this temple epitomises a ‘lost temple’. Covered in lichen and strangled by the jungle, it’s dark, mysterious and romantic. Here we scramble over the jumbled stones as locals herd their cattle through the verdant temple grounds. 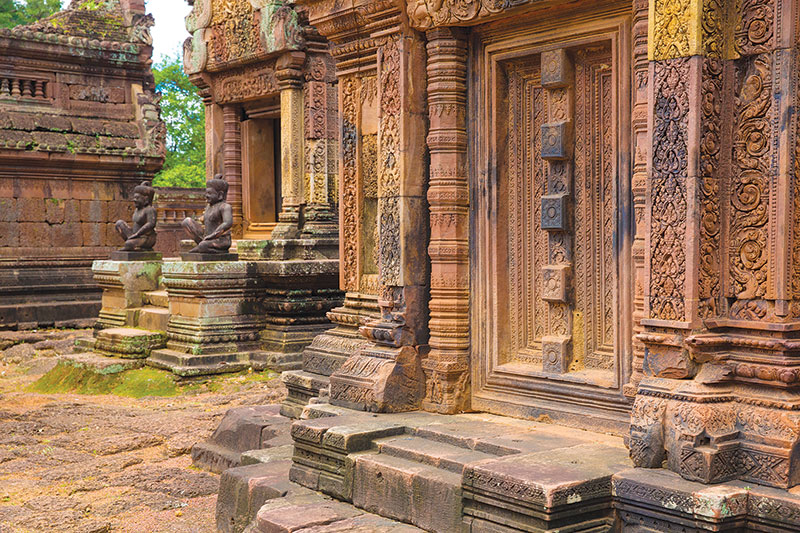 The old adage ‘leave the best until last’ doesn’t cut it in Cambodia. Each temple is an archaeological masterpiece generating its own beauty. However, Sarak has one last surprise with the ‘highest’ wow factor.
“We’ll be driving four hours there and four hours back,” says Sarak. “Oh and you need to bring your passport.”
Although we don’t cross the Thai border, we’re within 100 metres of the line in the jungle. After years of conflict between the countries over this UNESCO World Heritage Site, Preah Vihear has only recently been regarded as safe for visitors. Built in the 9th century in Angkorian style and sprawling over the top of a 625 metre mountain it’s known as ‘the temple in the sky’.

With five gopuras and decorative, dramatic open theatres and galleries to explore, we pace ourselves. Each enclosure leads to the next as we climb towards the pinnacle. A ladder leads to the last postage stamp sized temple. As I clamber up peals of laughter ring out. Sarak gives the ok to continue. When I crawl into the temple, three young monks greet me with smiles. Surrounded by more than 1,000 years of history, they’re playing a game. On an iPad. I look into their eyes and see both the past and future of Cambodia. • 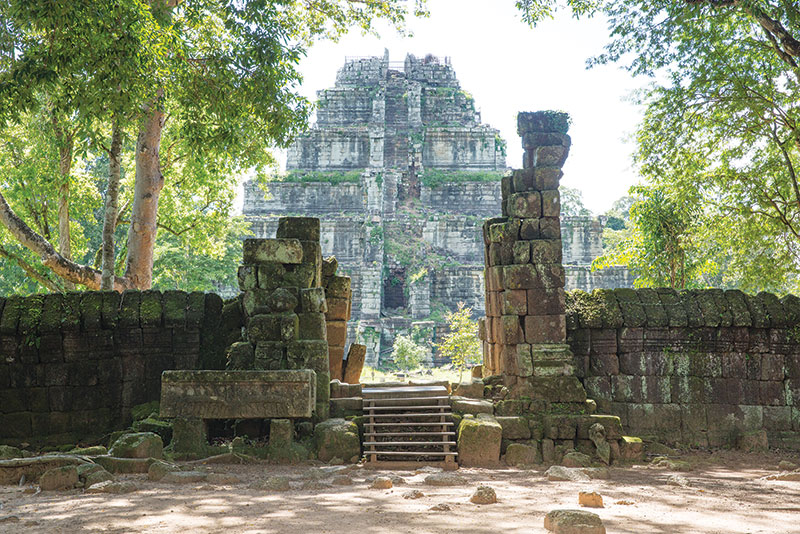 When to go
Cambodia is hot and tropical all year round. The wet season (June to September) is the off peak time. If you can handle the humidity and occasional sudden thunderstorms (usually in the late afternoon), you’ll be rewarded with less people and lush vegetation. The most popular time is November to March, when the weather is cooler and stable. Expect dusty roads and crowded temples.

Getting around
Registered guides in Siem Reap all wear the same uniform. Whether you choose to travel by car, tuk tuk, bus or bike, a local guide will enhance your experience. tourguides.viator.com

Where to eat
• Marum is part of the TREE alliance (Training Restaurants for Employment and Entrepreneurship) and by eating here you help secure the future of young rising stars in the culinary world.
tree-alliance.org
• Super adventurous gourmands will love Bugs Café (creative tapas with spiders, ants, scorpions, grasshoppers). bugs-cafe.e-monsite.com
• Francophiles head to the atmospheric Le Malraux. le-malraux-siem-reap.com
• Book early for Cuisine Wat Damnak, a fusion of Khmer and French cuisine using local produce. cuisinewatdamnak.com
• The Red Piano is where to kick back with the Tomb Raider cocktail made famous by Angelina Jolie. redpianocambodia.com 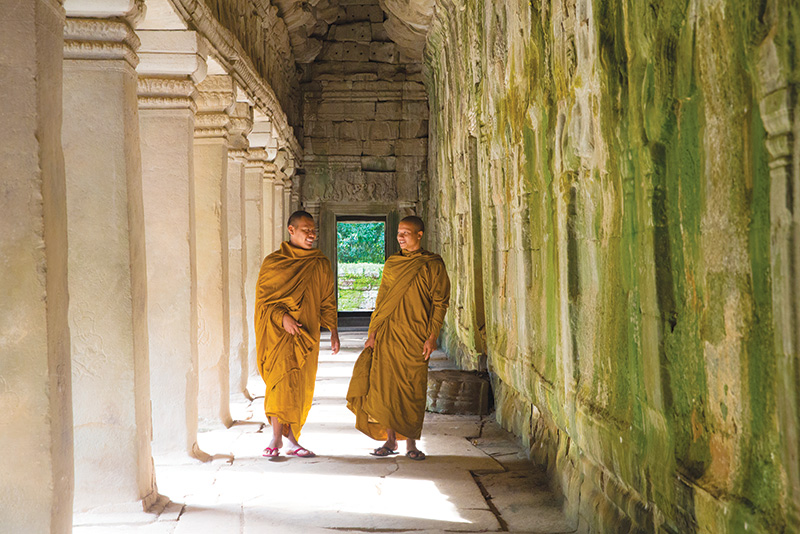