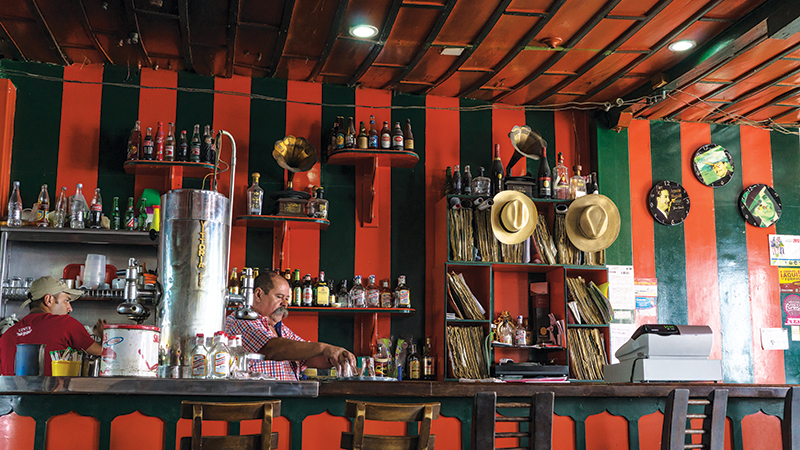 Colombia is one of the top three producers of coffee in the world, with Eje Cafetero a coffee aficiando’s dream destination

If you trace coffee back far enough, you arrive at dancing goats. After Kaldi the goatherd observed that his drove frisked through the night after chewing bright cherries from a nameless plant, he did what any goatherd would do and tried some himself. These plants lived up in the Ethiopian Highlands, the Kaffa region, and Kaldi was on to something. He quickly brought the fruits to an abbot, who tossed the devilish fruit in the fires. But even among stoical clerics the fragrance was irresistible, and they began mixing drinks to revitalise invocatory prayer. With the tonic of both religion and warfare, coffee spread through the Arabian Peninsula as 7th century nomadic tribes crushed the energising cherries with ghee and ate the mash before battles.

The Arabs tried hard to keep production a secret, while qahveh khaneh, the first coffeehouses, popped up in Syria, Egypt, Turkey and Persia. ‘Schools of the wise’ as they were called, these early coffeehouses were known as enclaves of chess and ideas. Coffee had become as vital as food and sex. In 16th century Turkey, wives could divorce their husbands for not providing it. In Mecca, the brew became known as the ‘wine of Arabia’. Coffeehouses began spreading through Europe as well; and before tea became patriotic in England, Oxford-style ‘penny universities’ became places to take a cheap cup and stimulate zealous conversation and ethos.

It was the Dutch who somehow got their hands on seedlings and tried to plant some in India, but failed, though soon found eastern root in 1699 Java. After some oily bloke gifted King Louis XIV with a seedling, the king ordered Captain Gabriel Mathieu de Clieu to share his precious water rations with it through western passage to Martinique. It spread wildly through the Caribbean and the South American tropics.

Today, coffee blurs the line between continents and lifestyles. There’s a good chance you love it, and a better chance your coffee loves the sultry hills of west-central Colombia. Colombia’s the world’s third largest producer of the hot cup – after Brazil and Vietnam, and before Indonesia – and 50 per cent of the country’s red, green, and yellow coffee berries are grown in Eje Cafetero, the Coffee Axis, or Zona Cafetera, a region that includes Caldas, Risaralda and Quindío, departments along the folded Cordillera Central (Central Andes) mountain range, tucked lushly in by the Cuaca and Magdelena rivers.

Colombian coffee beans are famous for their low acidity and complex flavour. The major difference between Colombian and Brazilian coffee, for example, are the methods. “Legislation in Brazil has changed a lot,” says specialist Felipe Viveros from Café Jesús Martín in Salento. “They have invested more in technology.” 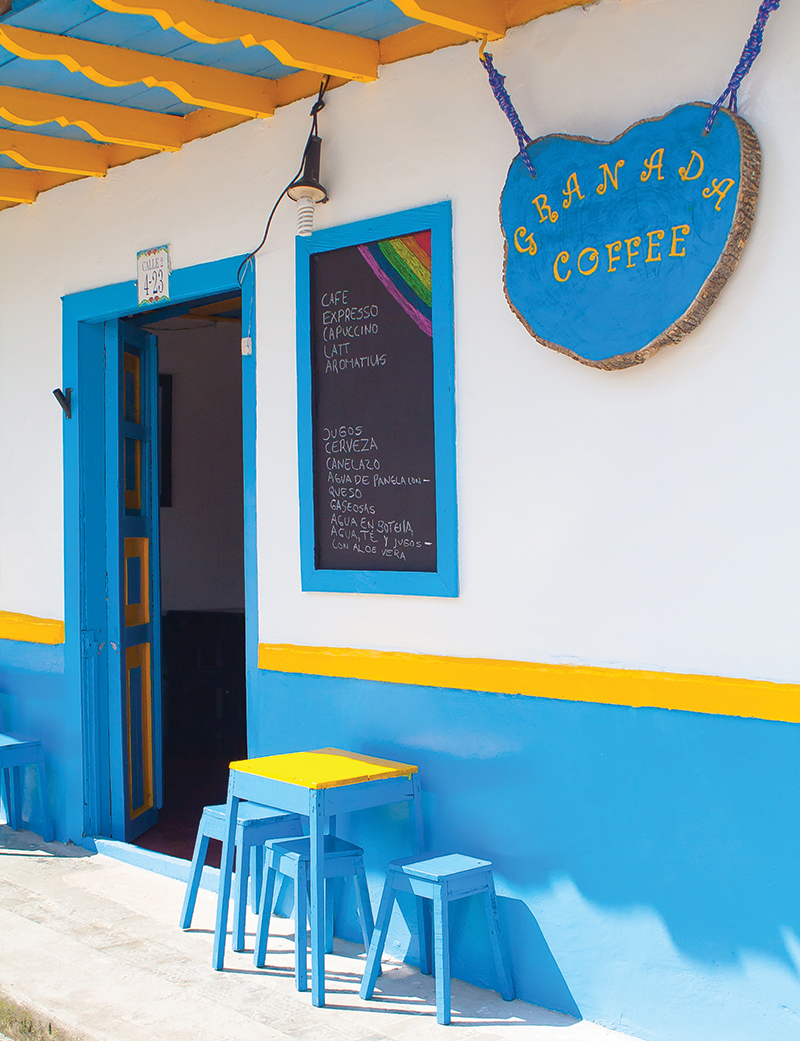 It all boils down to farmers’ relationships with the weather, their land and plants. Notes of cinnamon, peach and cranberry; kiwi, dried plums and hazelnut; mandarin, walnut and raspberry can be aromatically found in Eje Cafetero varieties. In the great search for Colombia’s best cup, I was led to the furthest corner of Quindío, to ‘La Ruta de los Café Especiales’, to Génova and the colourful one-horse-town of Pijao.

On the bus to Génova, I met a local who enthusiastically offered me her bed and a tour to the Génova cooperativa. I took her up on the tour. Cooperativas are associations of farmers who sell their beans collectively, which makes it nearly impossible to track single-origin beans and categorise them according to the manifold variables involved in coffee production, such as altitude, composting, variety, washing and drying techniques, hand-picking before and after milling, and so on. I found that even though the beans were anonymously collected, they were exceptional: rotund and free of deformities. But still tapering my search, I left for Pijao. There I met Victor Hugo at his leafy café on the main plaza. I ordered a cup with a dash of milk and found what I was looking for – the warm cut of heaven – a perfectly rounded brew with smooth notes of chocolate and hazelnut piqued with rose petal. Soon I was being tossed about in the back of Victor Hugo’s Jeep up to his 28-hectare finca, which sits at perfect altitude for the coffee plant: between 1,300 and 1,800 metres above sea level. Green and paradisical, the land has real gold glistening in the streams over the hills.

Victor Hugo’s plants have an exceptional life by today’s agro-standards: they’re grown via the primordial system known by like-minded farmers as agrigcultura limpio, ‘clean agriculture’. It’s a polyculture ecosystem of crops, flowers, herbs, trees, and decomposing elements that symbiotically fuel each other without the use of pesticides, herbicides, fungicides, or anything denoting –cide, a substance that kills. There are no inorganic elements on Victor Hugo’s finca. It’s not ‘anti-science’, since such systems are hinged on long-term systemic studies of observation and experiment. It’s simply slow food.

As we hiked over the green folds of his finca, Victor Hugo hugged and prayed to trees, caressed his berries, quite demonstratively, and cut herbs with his machete to release natural insect repellents. When farmers intimately know their ecosystems, a wealth of agrarian purposes are uncovered that are otherwise eclipsed by the single-minded approach of exercising chemical productions. Too proud to join a coopertiva, Victor Hugo controls the entire process, from sprout to drink; his five varieties are not blended with external crops but are bagged and sold singly. 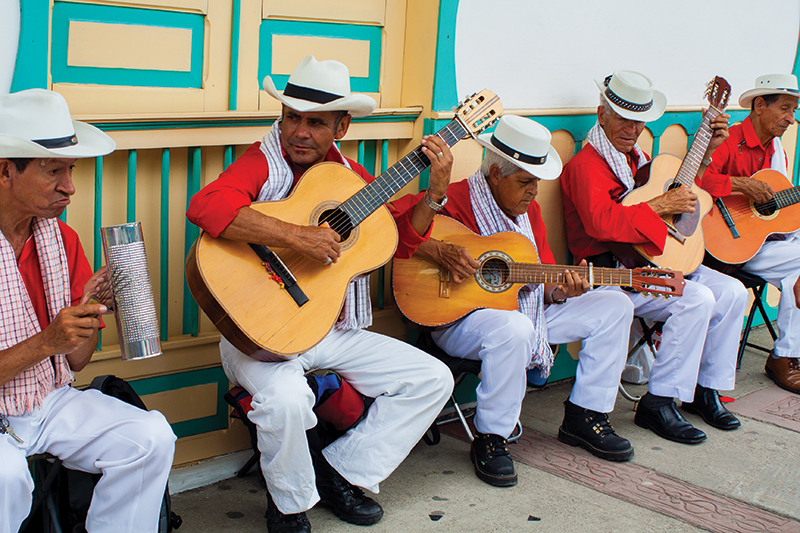 Sharing the same single-origin philosophy as Victor Hugo, Azahar Coffee Company wholesales directly from farmers. Azahar’s selection process is intense in their quality control ‘laboratory’ and it all works to streamline the selling process in an industry referred to by Dr. Gavin Fridell in Coffee as an “ever-expanding oligopolistic dominance of roaster, retailers, and traders” that has a historical legacy of exploitation since Dutch colonialism and slavery in Indonesia.

Coffee rides a rollercoaster of global prices, and “despite billions of dollars in profits made each year, the majority of the world’s coffee families live in relative poverty,” says Fridell. Families with less than ten hectares of land grow 70 per cent of the world’s coffee, and the competitions between families and transnational companies are fierce.

In Colombia, nearly all of coffee production is done by hand since the mountainous pitches prevent certain machinery,
but also because the ripest cherries are handpicked and production cradles the mestizo (mixed Spanish with American Indian) heritage of transcendentally respecting the land. A keen coffee picker can pick up to 80 kilos a day at 500 pesos a kilo (US$16). This is a kind of improvement. According to Oxfam, just over ten years ago the average coffee farmer was receiving US$0.14 per kilo for their green beans.

Of course there have been market-driven projects that shoot towards equality, like Fairtrade, the organic movement and corporate pledging, but these well-intentioned projects have rather concealed the line of farmer poverty and vulnerability than vanquish it. Farmers told me that the certification processes are expensive and at bottom have little to no relevance to producing good coffee. When I asked Azahar’s Armenia director, Jerónimo Jaramillo, what the certification hype was really about, he smiled and said expertly: “Here we think that if you have a great taste, that you did a great job.”

After learning details like the difference between aroma and fragrance, there may come that strange hour where you want to do something besides drinking coffee. Quindío is swathed in tropical rainforests and Guadua bamboo forests, and includes some spectacular features. Once you set foot in the Valle del Cocora – home of the world’s tallest palm, the wax palm, stretching up to sixty metres – your feet will effortlessly twirl you through this most beautiful valley, with or without your morning jolt. Fleshy heliconias (‘false birds-of-paradise’) are also endemic, along with an exceptional number of fluorescent super-sonic hummingbirds. Check them out on the Cocora trail at Reserva Natural Acaime. You get to Cocora via a smooth 40-minute Jeep ride down from Salento’s main plaza. 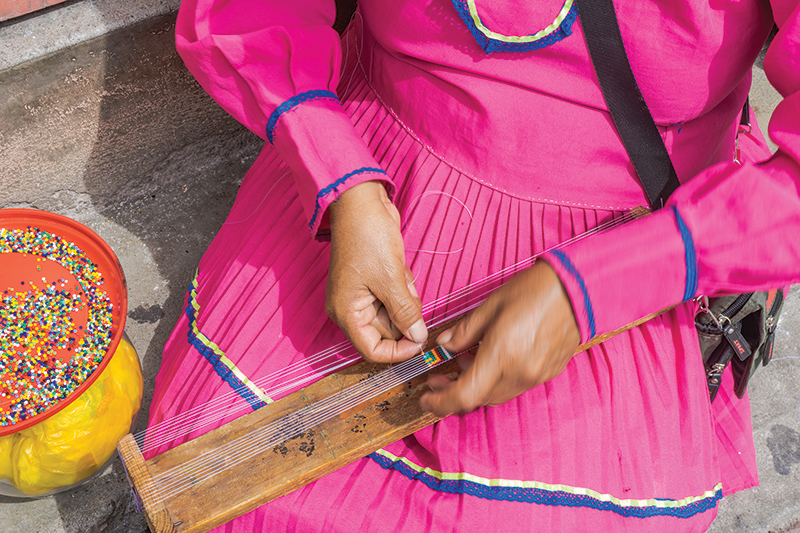 Salento is a more than typical Colombian pueblo. Like many of the others, it’s brilliantly coloured with undulating hills and great vistas. But here the energy smiles wider with festive art and rhythms. Handmade jewellery, ponchos and swinging ornaments adorn boutiquey terraces and multi-coloured doors. Weekenders salsa in the plaza and wonder why you’re not, and old men in red and white play traditional guitar ballads side by side while young men seek the pulse of the mountains with their native flutes just a few yards down the path.

Good cafés are plentiful, some of which operate 100-year-old La Victoria Arduino espresso machines, and coffee tours are within walking, cycling or horse riding distance. The best tour in Salento hails from The Plantation House’s Finca Don Eduardo. Owner Tim gives the “deliberately uncertified organic coffee” tour in blunt English. He’ll walk you through the traditional style of cultivating and harvesting coffee, as well as the artisanal roasting process on his ‘three-hour tour’. Finca Don Eduardo favours the Bourbon variety, a special Arabica heirloom that is considered by many to be the world’s best quality. Like other select varieties, Bourbon grows best at 1,100 to 1,900 metres, wherein the higher the altitude, the sweeter the bean – and Eje Cafetero is the ideal place.

Around Salento, explore some of Colombia’s most scenic landscapes. There are parks, reserves and thermal baths nearby, like Los Nevados National Park, the Tolima Volcano (5,220 metres), Kasaguadua Nature Reserve, and Termales de Santa Marta and Termales Balneario. According to Conservation International, Colombia is considered the most biodiverse country in the world per square kilometre; this includes 1,871 species of birds, the world’s largest avifauna gathering.

Colombia’s also a country of lingering contradictions, you’ve heard of warmest hearts and coldest contrabandistas, where you can bathe in tropical beaches and witness snowy peaks above. No doubt, it’s a place of fluky escapades. But if you loosen your usual constraints, you’ll be guided by a culture to the most unpredictable pleasantries.

Such is the genius of Colombia, but even more common than its serendipitous charm is a ubiquitous cup of rich, velvety tinto. “Take it to heart, we don’t just drink coffee”, says Felipe from Café Jesús Martín, “Coffee has a spirit – it has a spirit inside.” •

GETTING THERE
• LAN flies to Santiago and then to Pereira via Bogota. lan.com
• Qantas flies to Dallas Fort Worth with connections to Bogota with American Airlines. LAN and Avianca fly from Bogota to Pereira. From here, it’s less than three hours drive to Salento. qantas.com.au

WHERE TO STAY
• For king-sized beds and a sexy view of the western end of the Valle del Cocora, book at Hotel El Mirador del Cocora. elmiradordelcocora.com
• For authentic curry dishes and economical rooms, find Casa La Eliana. laelianasalento.com

WHEN TO GO
You can go anytime of year but you might avoid the crowds around the Catholic holidays.

FURTHER INFORMATION
• Azahar has a great website where you can view videos of contracted farmers and their farms, and learn how to brew better coffee at home. azaharcoffee.com
• Book a three-hour coffee complete tour with Tim at The Plantation House. theplantationhousesalento.com
• Contours Travel: contourstravel.com.au