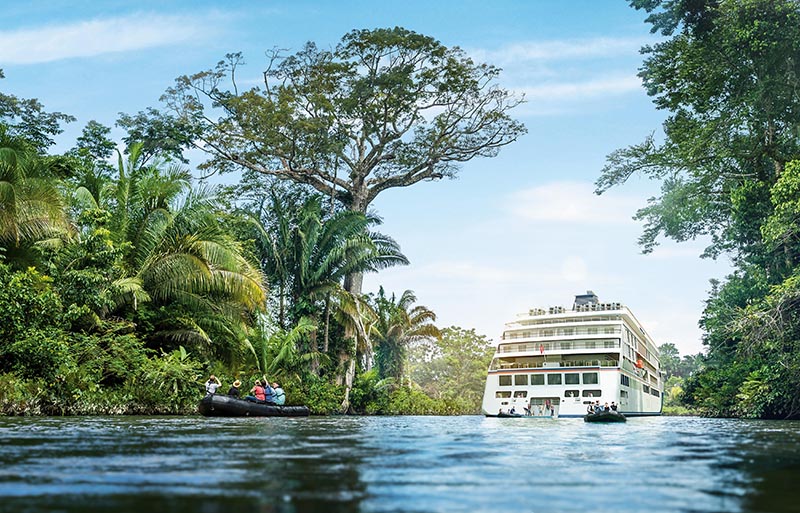 There is a swathe of ships of all dimensions looming over the horizon in 2018 well into the next decade; some colossal, others mere minnows.

Despite the ebb and flow of global shenanigans and climate flux, people demonstrate unswerving faith in the security of cruising, value for money, and as a fabulous means of accessing destinations you can’t even find on Google Earth. Australians have embraced cruising with gusto, with one in every 19 taking a cruise.

On trend is a passion for über-luxe ships, a love affair with leviathans of the seas and an insatiable appetite for the thrill of expedition cruising.

There is a ship for every budget this season with 60 cruise ships making 1200 port calls around Australia. Savvy passengers recognise the value of all-inclusive luxury cruise ships from haute couture brands, while others adore the razzamatazz mega-ships provide. As for luxury expedition cruising, flotillas of new vessels tantalise with increasingly alluring destinations dotted around the globe. 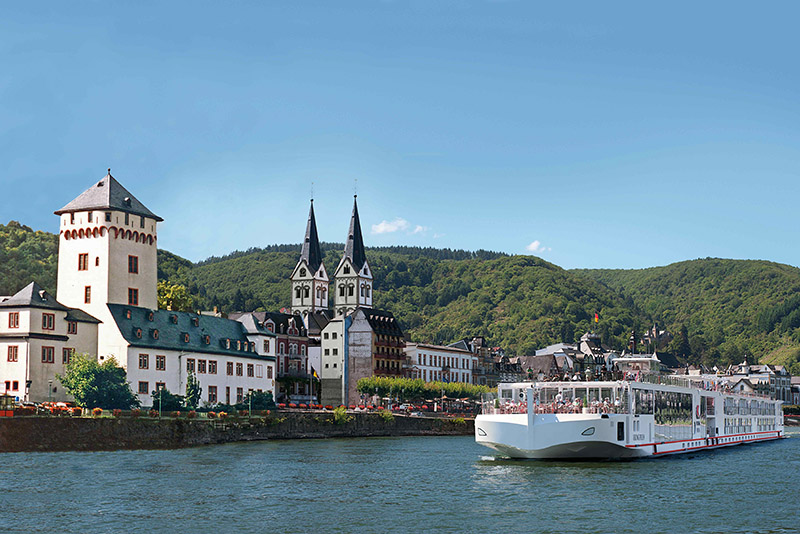 How do you measure luxury? For some, less is more, while others expect bells and whistles. Pampering and wellness programs are priorities. And multiple-choice eating venues that range from sushi bars to sophisticated fine-dining experiences are de rigueur. Grand dining rooms serving first and second sittings now compete with their own ship’s alternative dining outlets. Many traditional passengers, however, still opt for the more formal dining environment and, if this chimes with you, the Cunard queens always deliver (although it does depend on which accommodation category you have chosen – Queens Grill, Princess Grill or Club). Among other lines offering traditional fine dining are Princess and Holland America Line (HAL). 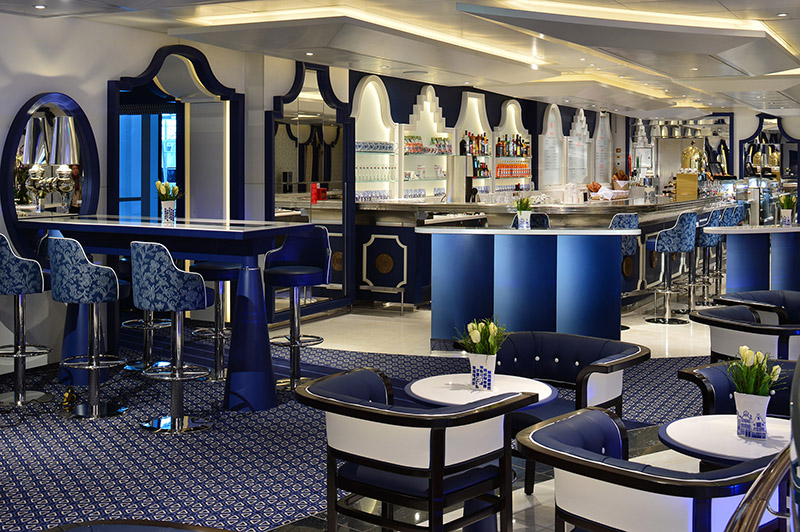 Or perhaps it’s those signature moments that link a brand to luxury: such as Seabourn’s Caviar in the Surf, or Paul Gauguin Cruises’ private island in French Polynesia where a floating bar bobbing about in a dreamy lagoon is tended by a sarong-clad heartthrob.

Or maybe it’s that moment when you’re gazing up at the billowing sails of Star Clippers’ square-rigger Royal Clipper, or watching crew furling sails at dizzying heights on salubrious barque SeaCloud II. For some, it’s Putting on the Ritz while on a transatlantic crossing on QM2, or chilling out on the effortlessly luxurious mega yachts of SeaDream.

What about freshly shucked oysters sprayed with Tallisker Whisky at Colonsay in the Inner Hebrides, where black tulips bloom and black-faced sheep stare as royal favourite, Hebridean Princess tugs at its mooring?

The most respected rating source is the Berlitz Cruising & Cruise Ships 2017 by Douglas Ward. For more than 30 years, the Berlitz Guide has provided in-depth, annually updated reviews of almost every cruise ship afloat. The guide’s highest rating is five-star plus; six-star ratings are non-existent. 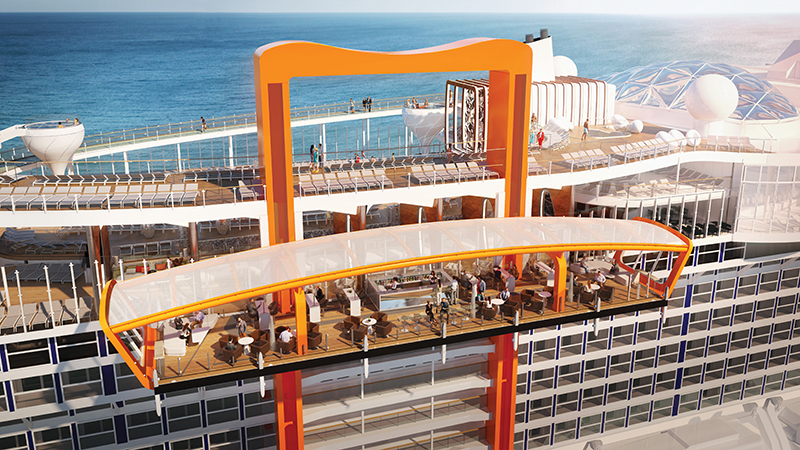 Royal Caribbean can be relied on to deliver blockbuster ships brimful of thrilling entertainment. Guaranteed to make a splash is the world’s largest cruise ship, the 6870-passenger Symphony of the Seas, which will debut in December 2018. Meanwhile 2918-passenger Celebrity Edge, the first of four Edge-class ships, will feature a moveable deck and cabins with balcony spaces that can transform outside to inside. Gone is the Lawn Club. In its place is a lavishly planted rooftop garden with giant movie screen and plenty of night music. Perfect for celebrity-seekers who like hip ships, plenty of pizzazz, classy food and glamorous cruise companions.

Over in HAL’s corner, the 2666-passenger Nieuw Statendam, second of its Pinnacle class ships after Koningsdam, will also begin operating in December 2018.

And perhaps the most exciting news from legendary Cunard, is a new, as-yet unnamed 3000-passenger ship, due in 2022.

MEDIUM-SIZE: 750 to 2500 passengers
Luxury brand, Crystal Exclusive has expanded its portfolio to include yacht, river, and expedition cruising along with a private Boeing 777-200LR. Meanwhile, Crystal’s highly awarded cruise ships, Crystal Symphony and Crystal Serenity have emerged from meticulous makeovers to shine more superbly than ever. 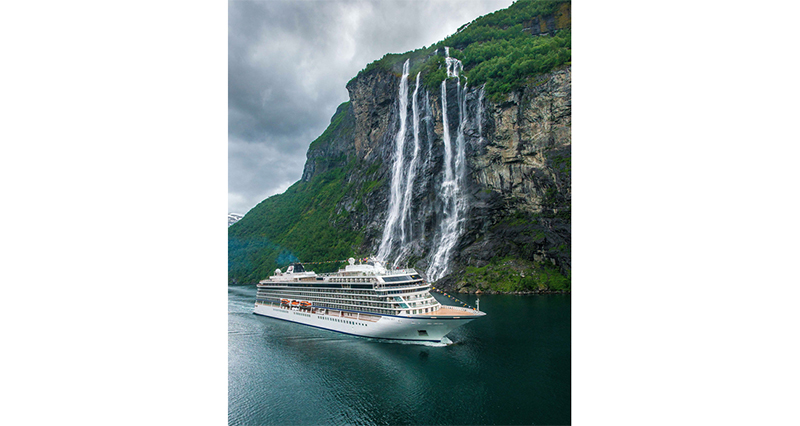 Viking won the hearts and minds of many with river cruising. Now it has expanded into ocean cruising with resounding approval for its classy, contemporary ships.
Viking Sun is the fourth of five near-identical 930-passenger ships. Its maiden season will be spent on the company’s first-ever world cruise. Then, in 2018, fifth ship Viking Orion will journey to the Middle East, Australasia and Alaska.

Oceania’s upper-premium ships justifiably pride themselves on outstanding cuisine and exceptional culinary journeys and its destination-immersive port stays are longer than most. In a similar vein, Azamara Club Cruises’ mantra is ‘Cruise Global, Connect Local’ and fans will be thrilled with its third ship Azamara Pursuit, due in 2018.

SMALL: 250 to 750 passengers
Hapag-Lloyd Cruises’ peerless Europa 2 and fleet-mate Europa, are the only cruise ships awarded the maximum, five-star-plus rating in the Berlitz Guide. Europa 2’s sleek
yacht-style silhouette with beautiful light-filled interiors spells chic boutique hotel. Among its exceptional amenities are impressive restaurants and food and beverage facilities that appeal to youthful sophisticates. The children’s programs are also outstanding.

In the wake of Seabourn Encore, sister-ship 600-passenger Seabourn Ovation debuts in May 2018. The all-suite, all-balcony ship has expanded public areas, a top-deck retreat with private cabanas and watersports marina. Headlining the dining venues will be The Grill, masterminded by Michelin-starred American chef Thomas Keller. 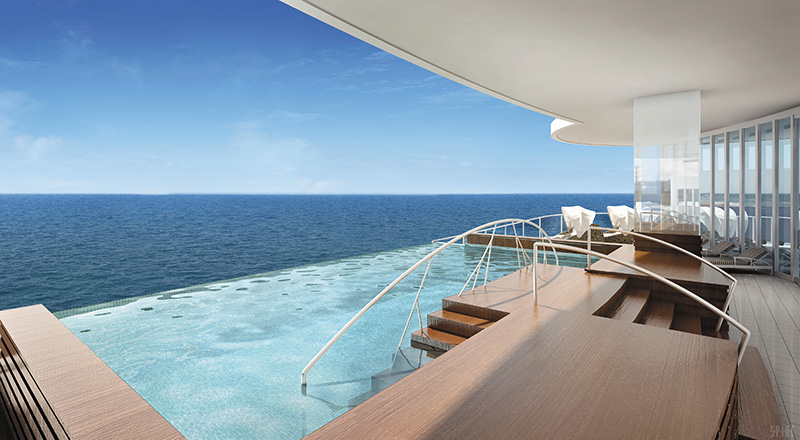 Meanwhile Silversea’s new build, provisionally named Silver Moon, is due in 2020. The all-suite ship, which brings the fleet to 10, will carry 596 passengers in Silversea’s effortlessly elegant environment. Following the triumphant reception that greeted Regent Seven Seas Explorer, expectations are high for her new sibling, Seven Seas Splendor, due in 2020. 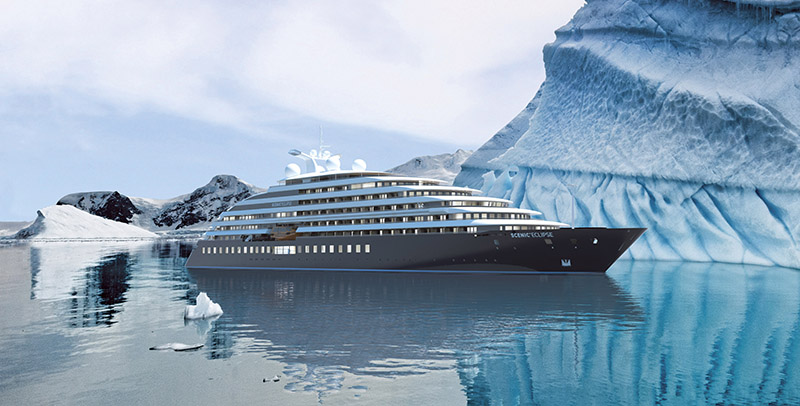 Australian-owned river cruise brand Scenic Cruises ventures into luxury expedition cruising with its August 2018 launch of Scenic Eclipse, which will have her inaugural sailing in Cuba in October 2018. The 228-passenger ice-rated Discovery Yacht will focus on polar and exotic regions, carry two helicopters, a mini-submarine, zodiacs, kayaks and snorkelling gear. It will have six dining venues, full-service spa and butler service.

Hapag Lloyd Cruises’ has a long-held reputation for outstanding expedition ships as well as cruise ships. Two new ships Hanseatic Inspiration and Hanseatic Nature debut in 2019 and 2020 respectively. Both will have retractable glass balconies where guests can experience extraordinary close-ups of wildlife, glaciers and other natural wonders. 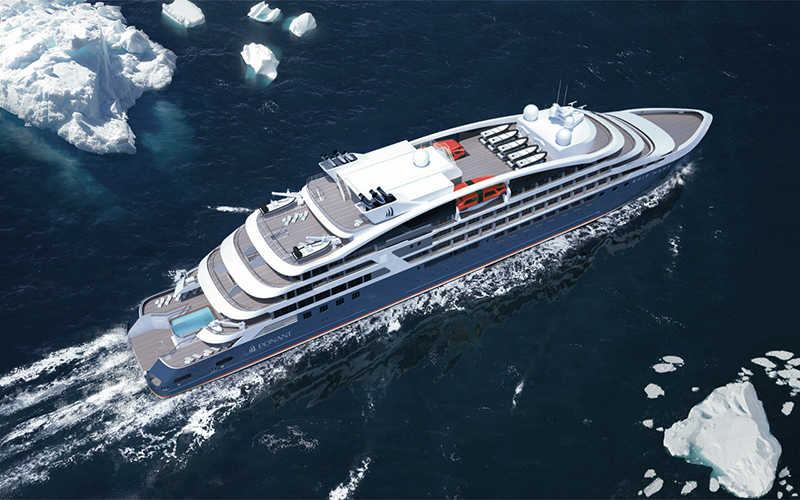 In 2018, French-flagged Ponant will mark its 30th anniversary with the introduction of four near-identical expedition ships named after great French explorers: Laperouse, Champlain, Bougainville and Dumont d’Urville.
First up is 180-passenger Le Laperouse, a seven-deck vessel with fitness centre and spa, infinity pool and a multi-sensory lounge below the waterline for viewing marine life.

Proud Australian, Coral Expeditions also has a new expedition ship under construction to be launched in mid-2019. Our favourite facility is the two Xplorer tenders mounted on hydraulic platforms, which allow guests to board on deck, then disembark on shore without getting wet feet.

BOUTIQUE: 50 to 250 passengers
Like a stately home afloat, Scotland’s Hebridean Princess is fit for a queen – in fact Queen Elizabeth has chartered her twice. The tone is ‘convivial country house’, serving outstanding local fare, with visits to remote island whisky distilleries and scenically spectacular islands off Scotland’s west coast. (If you have a kilt – wear it; there will be bagpipes and haggis.)

SeaDream I and SeaDream II are small, chic, luxury mega yachts renowned as the finest boutique cruise ships afloat according to Berlitz Cruising & Cruise Ships 2017. The food
and service is outstanding and the destinations intriguing.
Life on-board is very indulgent but low-key and not at all pretentious and no formal attire is required. In 2019, the cruise line will add Cuba to its itineraries – heady days in Havana?

SAIL
SeaCloud II is a magnificent three-masted barque with 30 sails, all manually set by an expert, athletic crew who are enthralling to watch. Its appeal is the thrill of tall ship sailing, but with beautifully crafted 1930s-style interiors, elegantly appointed cabins and exceptional food. The first SeaCloud was built for American heiress, Marjorie Mereweather Post, whose house, Mar-Al-Lago in Palm Beach, Florida, was bought by Donald Trump. The 94-passenger SeaCloud II is a classy, cultivated but friendly, fun-loving ship, best suited for couples. 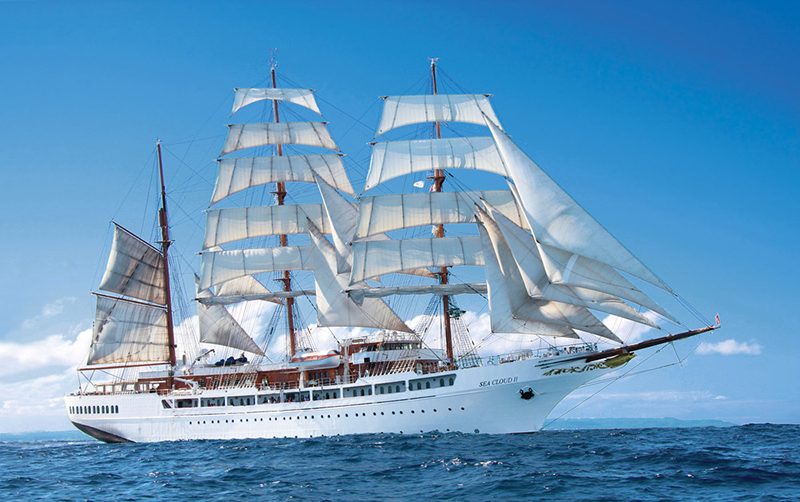 Flying Clipper, modelled on the early 20th century France II, will be the biggest-ever five-mast square-rigger ever built. The 300-passenger ship will be launched in 2018 and will feature many of the attributes aficionados of Star Clippers love: three pools including one above the dining room that channels natural light into the elegant interior space; the Tropical Bar; a platform for water sports; and glass-sided dive-training pool.

To purists, Windstar’s lovely trio of sail-cruise ships might not be authentic yachts, as sails are operated electronically. This doesn’t diminish the classy yacht-style experience aboard. The same can be said of its three all-suite vessels, which are purely motor-driven. Windstar scores highly for its alluring itineraries.

With the Cruise Ship Orderbook showing 90 new builds up to 2026, there will be no excuses not to cruise. •