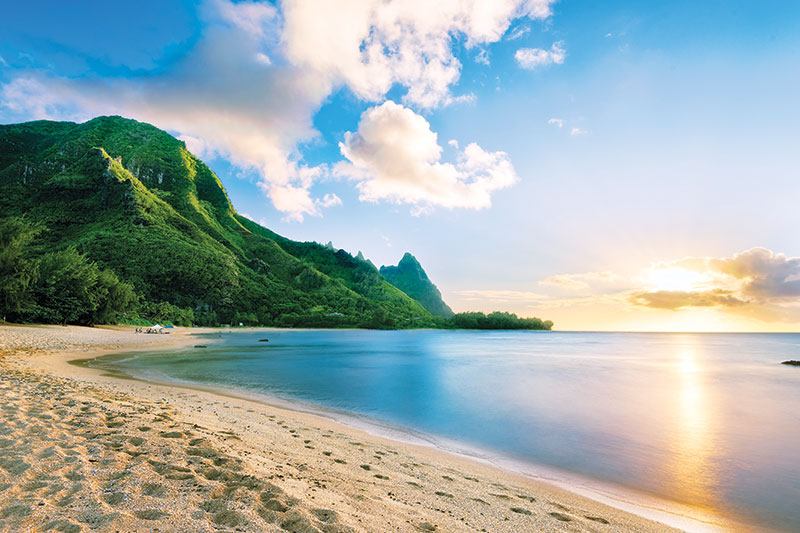 Peering across strewn branches to a collapsed roof, it’s clear the Coco Palms Resort in Kauai has seen better days. A wire fence and ‘No trespassing’ signs make further inspection impossible. This is not just any resort on the Garden Island of Kauai, this is where Elvis Presley floated down the lagoon serenading his bride in the movie Blue Hawaii back in 1961. He loved the Coco Palms so much, the King would come back and stay in room 56 for holidays on Hawaii’s northernmost isle, with real-life wife, Priscilla. Frank Sinatra and Bing Crosby also favoured it here; if you squint hard enough you can still picture them under a palm sipping a ‘Flaming Torch’ – a Coco Palms signature cocktail. But in 1992 Hurricane Iniki swept through and destroyed the resort. And now, 24 years later, it will finally be renovated. Set to reopen in 2017, the Coco Palms Hui by Hyatt is a much-awaited development here.

It’s just one of the locations on the island used for filming. Kauai doubled for Costa Rica in Jurassic Park, a South American jungle in Raiders of the Lost Ark and even passed itself off as Australia in The Thorn Birds. Hanalei Bay was the famous backdrop for South Pacific and more recently, the George Clooney film, The Descendants. 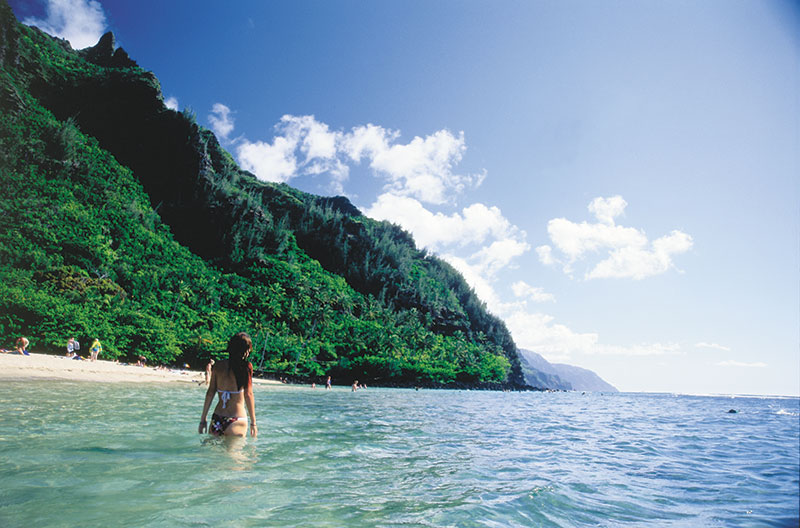 Come lunchtime, I’m sitting at the Tahiti Nui tiki bar eating pizza, this being the same location Mr Clooney drank an old-fashioned with his cousin (played by Beau Bridges). It’s a weekday and we’re the only tourists in the place. They say many stop by to get their photo taken on the same stool George graced, but more than likely you’ll just find a local having a drink and catching some live music. It’s an original tiki bar, opened in 1963. On the bamboo-covered walls are pictures of celebrities and glass floats hang off the rafters.

There’s a reason why moviemakers choose Kauai, it is incredibly beautiful from every angle. Visitors can choose to see jungle falls or even Waimea Canyon, ‘the Grand Canyon on the Pacific’ by helicopter. I’ve already seen Kauai from the sea, I have arrived on the Pride of America, a seven-day cruise which takes in Oahu, Maui, Hawaii’s Big Island and lastly Kauai. The ship returns to Oahu at the end of the cruise and even for a seasoned Hawaiian visitor, it’s the perfect way to spend a couple of days at each of the four incredible Hawaiian islands to find out what they offer – namely pristine beaches, waterfalls and volcanoes, cultural delights, the beautiful aloha spirit and even …well, outlet shopping.

Others might take in the beauty by kayaking the Wailua River. Another way to traverse the waterways of Kauai is by embarking on a mountain tubing adventure with Kauai Backcountry Adventures. You’ll leisurely make your way down a waterway, once part of a sugar plantation. The open channels, flumes and tunnels were hand-built in the 1870s. At times it can seem a little treacherous bumping into walls at full speed in the dark but it’s an adventurous three hours, and a picnic lunch awaits at the end. 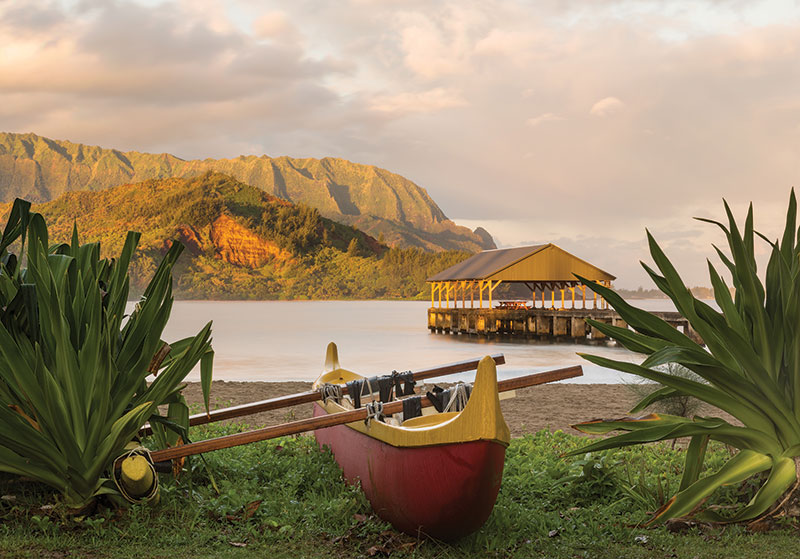 The best way to really discover the island is by taking a tour with a local. Erik Burton’s Kauai Guided Tours are tailored to anyone’s needs, and his passion for all things Kauai is palpable. Our wish is to learn more about the abundance of local fare – known as Hawaiian Regional Cuisine on the island, via the odd beach stop.

Erik steers the car toward the North Shore to visit the Limahuli Garden and Preserve. Here, Director Kāwika Winter takes us through the botanic garden, home to a number of native and endangered plant species. The recreated Hawaiian forest is built within rock terracing that was used to grow taro centuries ago. He highlights the pineapple, mango and papaya crops introduced by the wave of immigrants that worked on sugar plantations. The island’s volcanic soil is also ripe for producing everything including bananas, high-quality avocados and tomatoes.

For another botanical experience where you can wander through a beautiful garden and sample a variety of different fruits, Erik recommends the Princeville Botanical Gardens. If we had time he’d take us to the largest coffee plantation in the US, on Kauai’s westside, where you can tour the fields and sample up to 30 varieties at Kauai Coffee or perhaps a chocolate tour at Steelgrass Farm. 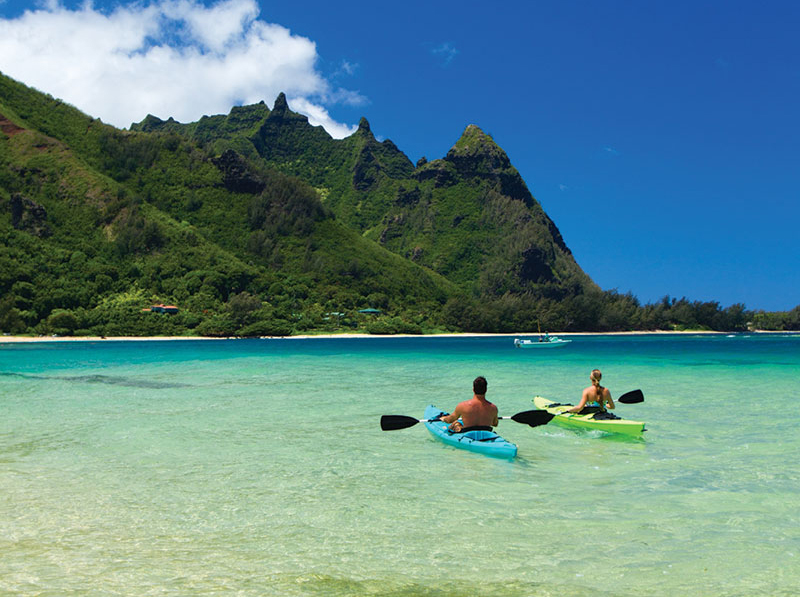 But instead we’re off to the beach. The snorkelling is best on the longest reef on the island, off Anini Beach on the north shore. Kauai is also known, like other Hawaiian islands, for its surfing. This is Bethany Hamilton territory, after all. You can learn to surf at Hawaiian Surf Adventures in Hanalei or Kauai Surf School in Koloa. The South Shore is ideal for surfing in the summer.

If it’s just a dip in the water you desire, then venture to Po’ipu Beach Park which has lifeguards, restrooms, showers and chooks in the carpark.

For a pristine uncrowded escape though, head to Hideaway’s Beach near the Princeville St. Regis (another filming location for The Descendants) down a steep stairway. Hanalei Bay is the largest bay on the North Shore offering a view of Makana Mountain. Here the waters are calm in the summer months. 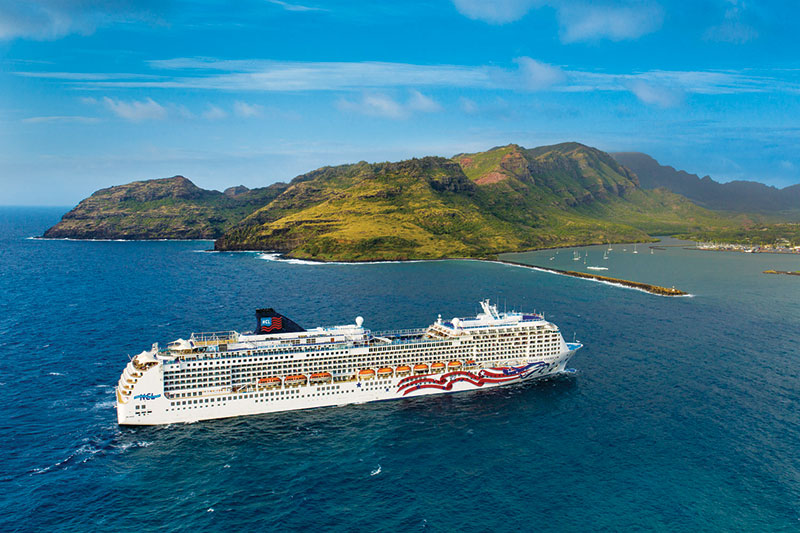 A taste highlight after a long day of sunshine, swimming and exploring, is shaved ice from the red food truck parked near the beach in Kapa’a. The ice treats from Wailua Shave Ice feature locally-made syrups with fresh fruit piled on top. We don’t want to get too full, as we’re heading to a Friday night luau celebration at Kilohana Plantation. It’s staged in a theatre-in-the-round, with a performance that traces the story of an ancient Polynesian family’s epic journey from Tahiti to Hawaii and culminates in an exciting fire dance. We might enjoy a spot of whiskey at the distillery on the property but our vessel awaits.

As the ship pulls out of Nawiliwili, everyone on the Pride of America heads to their balconies to view the magnificent Nā Pali Coast on the northwest shore. The 24-kilometre stretch of coastline is one of the least disturbed wildlands of Hawai’i. National Geographic voted it to be one of the top 50 most beautiful places on earth, and it’s easy to see why. In fact, from any angle, Kauai is incredible. Wafting in the breeze from my cabin is the unmistakable voice of Elvis, a YouTube clip from the movie plays. “Dreams come true,” he coos, “in Blue Hawaii”. •

Getting There
Hawaiian Airlines flies daily between Sydney and Honolulu. Passengers from other states fly Virgin Australia to connect to Sydney. hawaiianairlines.com.au

Where to stay
• Norwegian Cruise Lines’ Pride of America has a seven-day cruise beginning in Oahu then visiting Maui, Hawaii’s Big Island, Kauai and back to Oahu. It’s a great way to get a good overview of each of these four islands. NCL.com
• The St. Regis Princeville is a luxury resort on the North Shore. princevilleresorthawaii.com
• The Aqua Kauai Beach Resort is located on Kauai’s longest beach. aquaresorts.com
• Aston Hotels has three hotels on Kauai including the Aston Islander on The Beach. astonhotels.com

Where to eat
• Olympic Café, Kauai – Located in Old Kapaa Town, the Olympic Cafe’s menu includes local giant avocados and freshly caught fish. Prices are reasonable and this being America, the portions are enormous. olympiccafekauai.com
• Bubba’s Burgers – At Bubbas, they use local Kauai beef in their delicious hamburgers. bubbaburger.com
• Shave ice from Wailua Shave Ice – Using only the best locally made syrups with local fruit on top, these are amazing creations. wailuashaveice.com
• The Luau on Tuesdays and Fridays at Gaylord’s is a fun night out. luaukalamaku.com

Tips
• As Hawaii is a state of the USA, ensure that you have an ESTA visa waiver.
• Always carry $1 notes, tipping is expected here for restaurant food, bar drinks, taxis, tour guides, experiences and for hotel/ship room attendants.