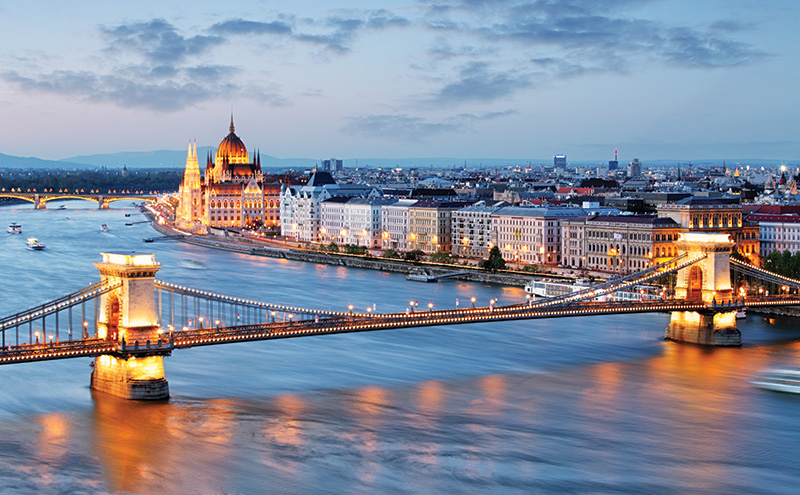 Pest-side
Restaurants, cafés, and markets play a big role in my life and, when travelling, pretty much take on an itinerary of their own. Of course I had read up and knew to expect goulash and poppy-seed pastries. The salamis were a surprise, at least the variety, sizes and takes on the item. For any foodie, the Central Market, nearly completely destroyed in WWII but since restored to its former grand late 19th century glory, is a must. And the salamis on display, from man-sized, and I mean literally man-sized: longer than my frame even in heels, to the bite-sized nibbles, are a sight to behold.

Market sellers are the clichéd picture of Hungarians with ruddy faces, aprons, loud voices and a welcoming urge to explain their product to everybody who may not be local. I tasted different salamis and learned about sweet and smoked paprika, with the sweet being typically Hungarian and used for dishes such as goulash and the smoked an import which adds a little oomph to a dish. Other offerings included the ever popular poppy seeds, tons of fresh wild mushrooms, local wine and they also do salami corn chips: shaped like tiny salami slices and so good that I am part upset, part very grateful that they are not available anywhere outside Hungary.
For more food there is a café on the upper floor of the market offering local cooking (not cuisine, but hearty stews and rustic offerings in generous portions). The views from up there across the vast market hall are a photographer’s delight, too.

The good thing, with Hungary being so full of calorific culinary delights, is that Budapest is a great place to just walk. In the case of the market area, it is right next to the ornate Liberty Bridge, all green riveted iron, with great birds sitting on the four masts. It was originally built for the Millennium World Exhibition in 1896, and initially named for Emperor Franz Joseph, who fastened the last steel rivet himself. It connects the market, on the flat Pest-side with the Gellert Baths on the hilly Buda-side, but I wasn’t ready to cross over to the other side quite yet. 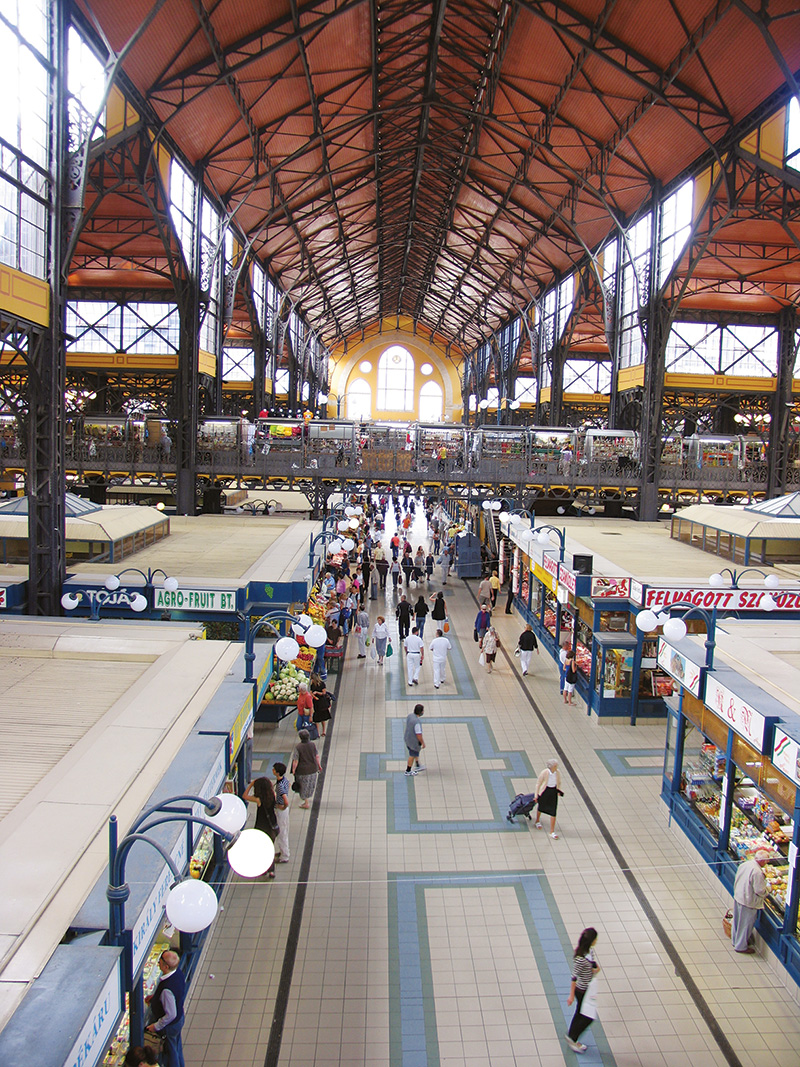 In contrast to many other old European capitals, in Budapest there is no walled ancient city that is easy to manoeuvre around and holds all of the city’s ancient treasures. Instead, Budapest is sprawling and, it being two cities, and two very different cities separated by a large river but joined by myriad of bridges, there is some walking involved. One of the loveliest strolls is along said river, the impressive Danube. Changing colour according to the weather, it is a sight in its own right. And whether you like touristy boats or not, a quick cruise is a must. Along the quay from the market, on the way to the parliament building at the far end, I hopped on a cruise boat, opting for a quick trip around Margaret Island. The views of the city, flat and full of large buildings on one side, the hills with its eclectic castle on the other, and in the middle, apart from those really long river cruise boats taking up a lot of the river, is Margaret Island. Like all big cities, Budapest has that one popular park where everybody goes to walk, picnic, exercise, and relax for the day with the family. In Budapest it just happens to be on an island.

Back on land after a quick coffee and a lot of views, my promenade along the river continued with a set of quirky statues: a girl with a dog, a little princess sitting on the fence. Alas, however pretty the sights, the Danube Promenade runs parallel to Vaci Utca, one of Budapest’s best shopping streets, and I have to admit to zig-zagging a little, to ‘research’ the shops available in the city. Vaci Utca also leads to Vörösmaty Square, hopping with cafés and people, and plenty of ice cream shops. Who’d have thought Budapest is famous for ice cream? But it is, and it’s got to be done. You know, when in Budapest, and all that.
Past the grand hotels, and just ahead of the Parliament building, which I at first mistook for the Budapest Castle it’s so fancy, is the most bone-chilling sculpture of them all though: dozens of bronze shoes facing the Danube. The sculpture pays tribute to Jews killed during WWII by Arrow Cross militia, and is one of the saddest sights and hitting home the upsetting history of Hungary.

Buda-side
Crossing the Chain Bridge, which, together with all the bridges, was destroyed totally in WWII, but have since been restored to their former beauty, you get to the Buda-side of Budapest. Looking for the castle, I should really have clambered up the steep hills to make up for the overload of calories taken in the previous day, but, being a bit of a funicular-aficionado, I took the easy way up: the once-again-war-destroyed-but-now-lovingly-restored Budavari Siklo. Formerly an easy commute for workers, now a tourist trap, but a very pretty one. 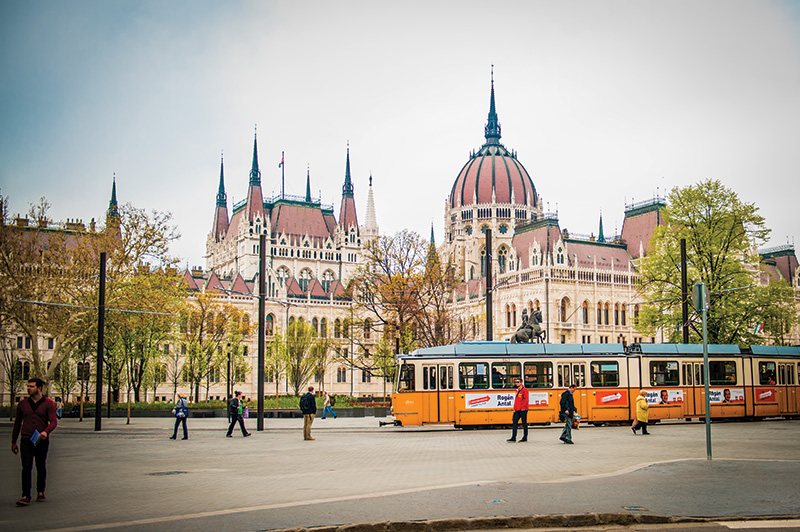 Once on the top of the hill, finding the Buda Castle is less straight forward than it sounds. Buda Castle is not a castle, but a district filled with numerous royal buildings, a complete mishmash (which is, by the way, a Hungarian word) of architectural styles. Cobbled alleyways and arches lead you to find all sorts of strange and wonderful buildings. My personal favourite was the Fisherman’s Bastion, which, with its seven towers comes the closest to a fairy-tale castle on the hill. It is easy to spend hours up at Buda Castle, so many sights, so many views, so many restaurants, but I first had to go underground, and then for a swim.

Really it is a miracle that Buda Castle is still there. The hill underneath is riddled with caves and tunnels, some of which are open to the public, others used to be and have since closed with new ones accessible in their stead. I stumbled upon the Labyrinth, a strange mix of real caves, man-made tunnels, fairy-tale stories, follies and sights. Very odd, very Budapest.

I have to admit that my focus was slightly off, as I was facing my last challenge, the Gellert Baths, just opposite that tempting Central Market. I was ready for a swim, my dip into the famed healthy waters. Little did I know that this would turn into a Kafka-esque experience. Not at my best in a swimming costume, with a rubber hat and no glasses on, I wandered seemingly endlessly from my cabin to find the pool. Past the stark-naked local women chatting in the showers, all shapes and sizes, scowling at me for remaining resolutely over-dressed, I eventually found and briefly tried out the freezing cold indoor pool. Short of breath and turning blue, I finally found a nice heated pool outside. Coffee and snacks served nearby. Even cakes and ice cream. Counting on the powers of the water, I threw caution to the wind and enjoyed what Budapest does best: excellent food in stunning historical surroundings… •

GETTING THERE
Qatar Airways offers one daily flight from Doha to Budapest, and you can connect to Doha from Melbourne, Sydney, Adelaide and Perth. Emirates Airlines also has daily flights to Budapest from Dubai, and with the Qantas codeshare you can connect from across Australia. Both operate with only one stop over. Others, such as Singapore Airlines connect via Singapore and Frankfurt with Lufthansa.
• Qatar Airways: qatarairways.com
• Emirates Airlines: emirates.com
• Singapore Airlines: singaporeair.com

WHERE TO STAY
• Adina Apartment Hotel Budapest is in the heart of the city close to Margaret Island: tfehotels.com
• The Four Seasons Gresham Palace Hotel overlooKs the Chain Bridge and Buda Castle: fourseasons.com
• The Corinthia is all old-world charm and grandeur: corinthia.com
• On the Pest side. Brody House is a fantastic old town house, trendy shabby-chic with quirky details: brodyhouse.com

WHERE TO DRINK & DINE
• Gerlóczy Café is the place to sit, people watch and try the local cakes. But you can also stay there, and the staircase alone is worth a peek inside. gerloczy.hu
• Manna Lounge on the hills by the castle offers modern Hungarian food, in a great, spacious setting. If the weather allows, ask for a table outside. mannalounge.com
• The ruin pubs are a Budapest thing: set up in (formerly) ruined, dilapidated buildings and courtyards, these drinking and clubbing places are the epitome of cool. At times looking odd, they are never lacking of atmosphere. With new ones constantly opening, or being the flavour of the moment, check out a collective website: ruinpubs.com
• Gelarto Rosa (1057 Budapest, Hercegprímás utca 3) has simply divine ice cream in the shape of flowers.

WHAT TO READ
The Invisible Bridge by Julie Orringer is a very well told tale of Paris and Budapest in WWII.