For a pair of neighbours, Australia and New Zealand have strikingly different backyards: outback, desert and seemingly endless beaches in one; sharp-edged mountains, glaciers and ominous volcanoes in the other.

What they share is a sense of wildness, where grand landscapes beckon hikers up to mountain tops with vast views, along empty beaches, through dense rainforest, or into the spray of mighty waterfalls. No other form of travel can give you such an intimate look into the natural heart of these most natural of countries.

Here’s our pick of 11 of the finest hikes in Australia and New Zealand. 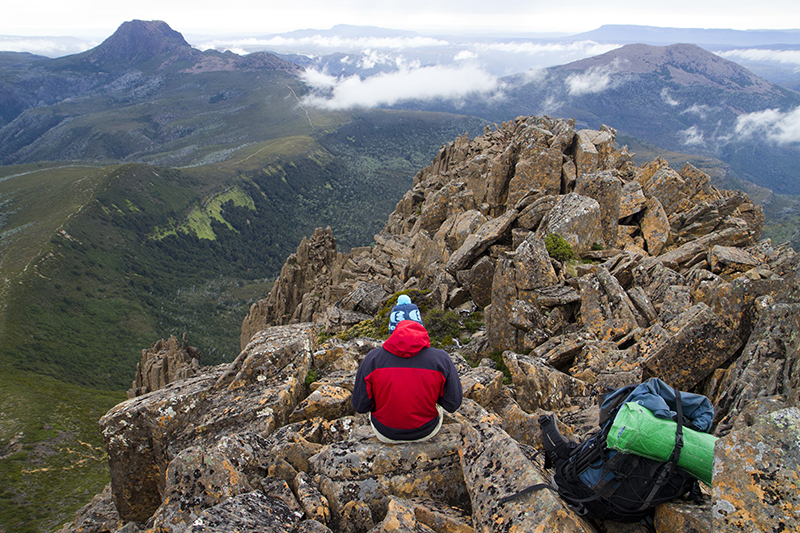 Tasmania’s Overland Track carries a reputation as the premier mountain hike in Australia, and yet it cleverly avoids all mountains. For 65 kilometres the track winds between some of the country’s most striking peaks – Cradle Mountain, Barn Bluff, Mt Oakleigh, Mt Ossa – but climbs are few, making it more accessible than many believe.

The terrain is incredibly varied, ranging from alpine plateaus to ancient beech rainforest and powerful waterfalls. If the mountains do beckon, most of the peaks can be reached on side trails.

Six public huts dot the track, providing walkers with accommodation, or you can carry less and eat (and drink) more with a guided trip on the Cradle Mountain Huts Walk staying in private huts. 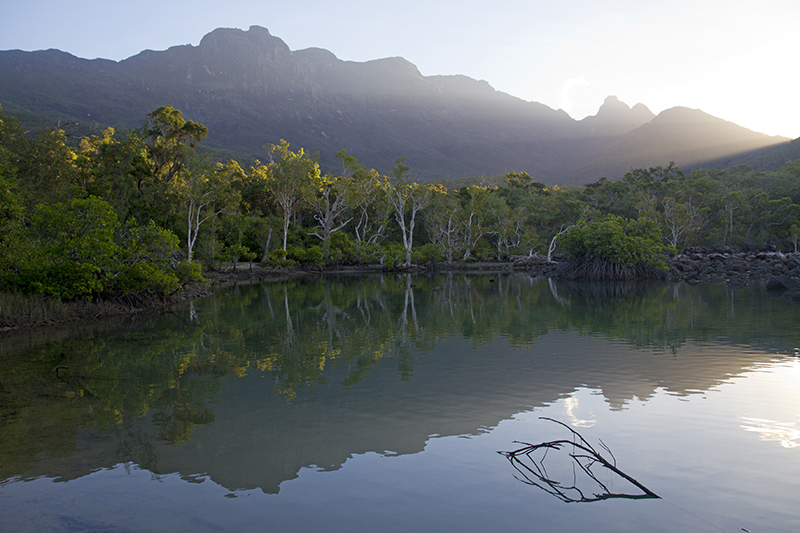 There’s early perspective with a short but steep detour up Nina Peak, where there’s a view along the line of beaches that will be your companions for the next four days, as well as over one of Australia’s largest mangrove areas (which helps explain the crocodile warning signs).

Each day of walking is short – an average of eight kilometres – allowing plenty of time to wallow in water and laze on beaches. Campgrounds are set behind beaches, or by the foot of Mulligan Falls. It’s everything that’s good about tropical life, with a walk thrown in. 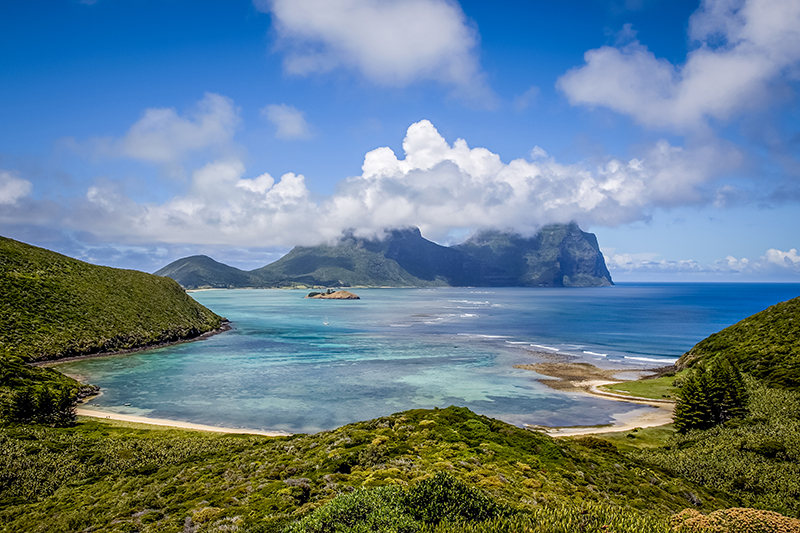 A great way to explore the natural wonders of the World Heritage-listed Lord Howe Island is with this guided five-day walk with Pinetrees.

The walk – for experienced hikers only – showcases the spectacular nature of Lord Howe, including the pristine beaches, the mist forests on Mt Gower, the cliff-side scenery on Mt Lidgbird, through Banyan forests and more.

Tours are led by former park ranger and mountain guide, Dean Hiscox, from Lord Howe Environmental Tours, and former United Nations ecologist, Luke Hanson, from Pinetrees Lodge. After a day of hiking, enjoy the comforts of the lagoon-side Pinetrees and take in the sunset. 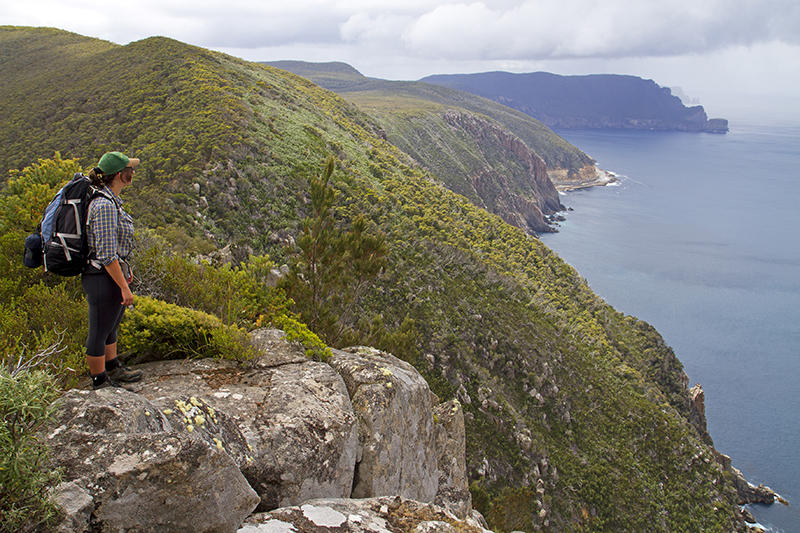 Tasmania’s newest walk opened at the end of 2015, and may well redefine the nature of Australian hiking trails. It’s a cliff-top spectacular, heading to the airy tops of Australia’s highest sea cliffs, 300 metres above the raging Southern Ocean, but just as impressive as the views is the trail infrastructure.

The purpose-built track is wide enough for two to walk abreast, there are 36 art installations (with accompanying handbook) telling the story and history of the Tasman Peninsula, and the three huts are the plushest public hiker accommodation in the country – think yoga mats, canvas deck chairs and memory-foam mattresses. It is a hike like no other in Australia. 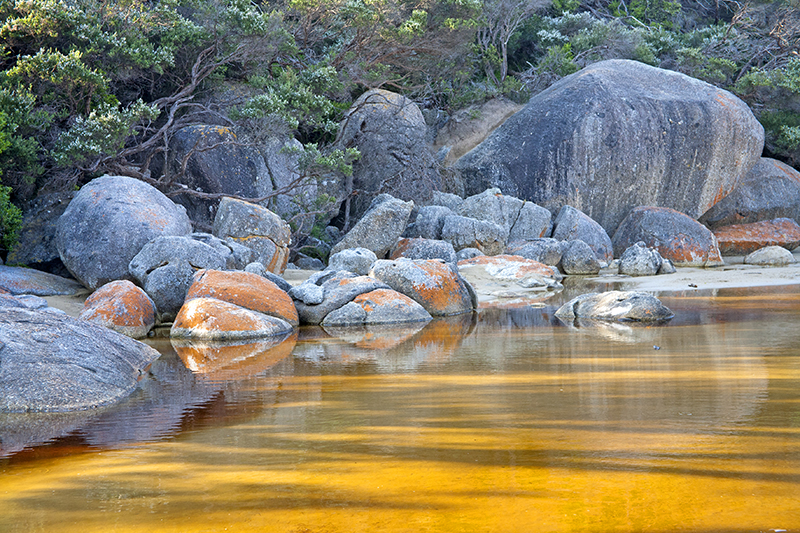 The southern circuit of Victoria’s Wilsons Promontory, the southernmost point of the Australian mainland, is a rite of passage for many bushwalkers. Distances are short – no more than about 10 kilometres between camps – the terrain is straightforward, and beaches are plentiful.

The opening hike over Windy Saddle is one of the rare climbs of note, before the trail makes for the coast and idyllic ocean nooks such as Refuge Cove.

At Little Waterloo Bay, the main circuit turns west, crossing to Oberon Bay and returning to the starting point at Tidal River, but it’s worth building in an extra day and continuing down the coast to the Prom’s lighthouse, where lighthouse keeper cottages offer a night out of the tent. All in all, one of the finest coastal walks in Australia.

Expect a few unusual hiking companions on this 133-kilometre coastal wander past Margaret River in the southern corner of Western Australia. Scan the waves as you walk along the cliff tops, and you’ll probably find surfers. Look beyond the surfers and you’re likely to see migrating whales.

The walk connects Cape Naturaliste and Cape Leeuwin, and feels far more remote than maps would suggest – on beaches such as Quininup Beach and long Deepdene Beach you’ll be unlucky if you see another person.

Southern right whales migrate past this section of coast from about June to September, so aim to walk it then – sighting a breaching whale as you hike is a moment never forgotten.

For a trail taster with a touch of luxe (think end-of-day plunge pools at your villa, spa treatments, private bar), take a four-day hike with Walk into Luxury.

One of the world’s most scenic long distance walking trails, the Bibbulmun Track stretches from Kalamunda on the fringe of Perth to the port town of Albany.

One of the best sections to experience is between Walpole and Albany, where you can watch surfers tackling the waves and walk in native forests in four national parks; Walpole-Nornalup, William Bay, West Cape Howe and Torndirrup.

Walk into Luxury conducts guided walks on the Bibbulmun, staying at the The Beach House at Bayside and West Cape Howe Cottages with all the trimmings thrown in. 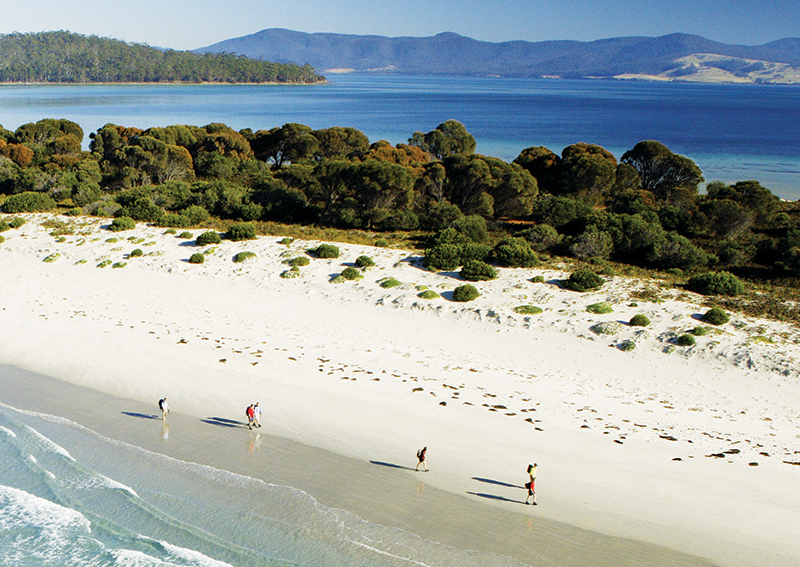 Take a walk through Tasmania’s history – both natural and human – on this four-day guided hike from toe to tip of Maria Island. The island national park is a place of craggy peaks, sublime beaches, abundant wildlife and a convict infrastructure that predates Port Arthur.

Staying in stylish private camps, with fine Tasmanian produce and wine to fuel your journey, the Maria Island Walk presents short waking days with spectacular scenes – the view down into the island isthmus from high atop Mt Maria; the swirling sandstone patterns of the Painted Cliffs – and wildlife encounters with the likes of wombats and Tasmanian devils, which were introduced to the island a few years ago and are now thriving.

Combining classic Top End scenery with cooling swims and a remote gallery of Aboriginal rock art, the Northern Territory’s Jatbula Trail is a 66-kilometre walk along the Arnhem Land escarpment.

The hike begins at Katherine Gorge (and ends at Edith Falls) and follows the line of the cliffs through the Top End savannah, passing a welcome series of crocodile-free waterfalls and streams.

Camp each night is beside the water, providing irresistible opportunities to wash off the outback heat and dust. One of the walk highlights is the chance to descend into the shaded Amphitheatre, where monsoon rainforest is backed by a wall of rock art depicting the likes of emus and Jawoyn women. There are guided walks on the trail. 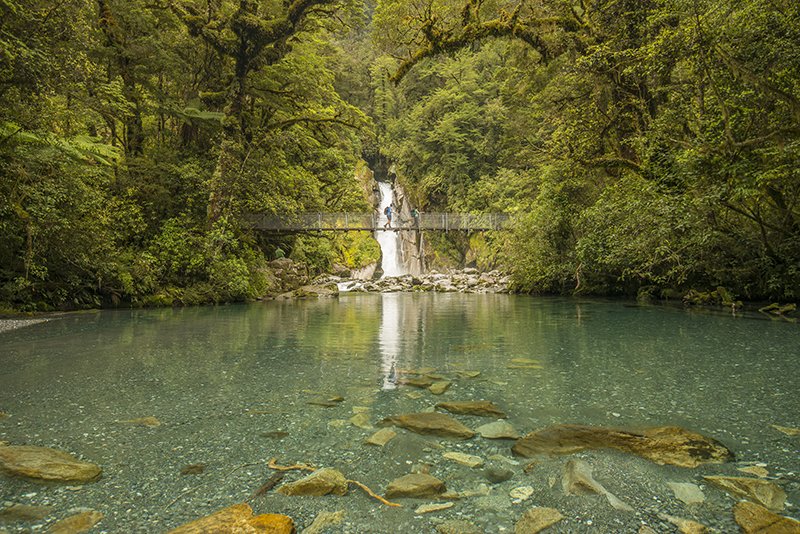 It’s been more than a century since the Milford Track was branded the ‘finest walk in the world’ by a London newspaper, and it’s lost none of its sheen in the intervening decades. The four-day, 53-kilometre hike follows the course of two dramatic valleys, interrupted in the middle by a steep climb over exposed and spectacular Mackinnon Pass.

The mountain scenery is sublime and humbling, the rainforest is primeval, and there’s the opportunity to detour away to the foot of 580-metre-high Sutherland Falls, which were long thought to be the highest falls in the world. The walk ends spectacularly on the shores of Milford Sound.

There are public huts at the end of each day’s walk (camping isn’t permitted), with guided walks, staying in private huts, run by Ultimate Hikes. 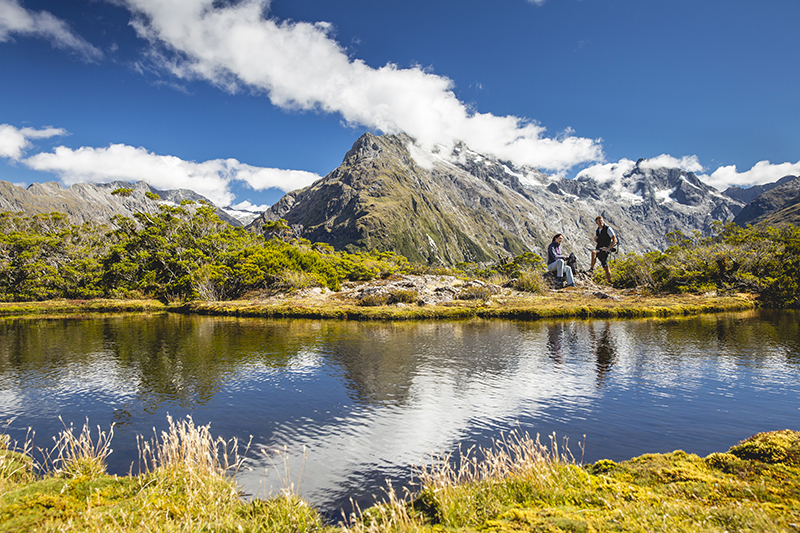 The Milford Track’s mountain sibling is at least its equal – some argue it’s superior. Where the Milford is primarily through valleys, the three-day Routeburn Track is an alpine walk that spools out like a highlights reel of mountain scenes. Climbing high above the tree line, the 32-kilometre track provides vast views and a tangible sense of high-mountain exposure, neatly sewing together alpine tarns, the deep Routeburn Gorge and powerful waterfalls.

There’s almost 1,000 metres of climb between the track start at the Routeburn Shelter and the high point of Harris Saddle, so come fit and prepared.

There are public huts with campsites, or you can walk it in style, staying in private huts, with Ultimate Hikes. 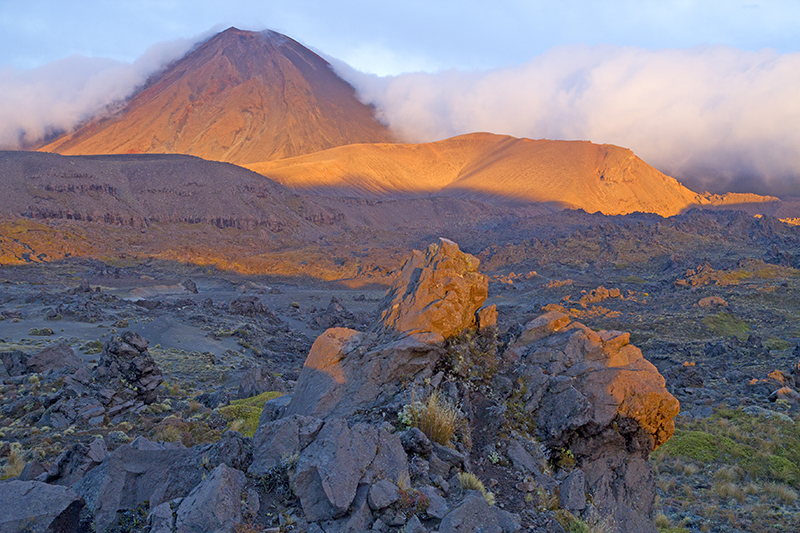 Whether you spend a day on the Tongariro Crossing or three or four days looping around the Tongariro Northern Circuit, this North Island national park provides a stark insight into volcanic landscapes.

The Tongariro Crossing, often called the finest day walk in New Zealand, combines luminous volcanic lakes with steaming fumaroles and open views of the perfect volcanic cone of Mt Ngauruhoe (aka Mt Doom in The Lord of the Rings movies).

The Tongariro Northern Circuit, one of the country’s nine Great Walks, incorporates the Crossing, but continues on to loop around Ngauruhoe through New Zealand’s only desert – Mordor in the films – passing near to the spectacular Tama Lakes and beneath Taranaki Falls, which pour powerfully off an ancient lava flow. There are four public huts along the Circuit. Adrift operates guided hikes. 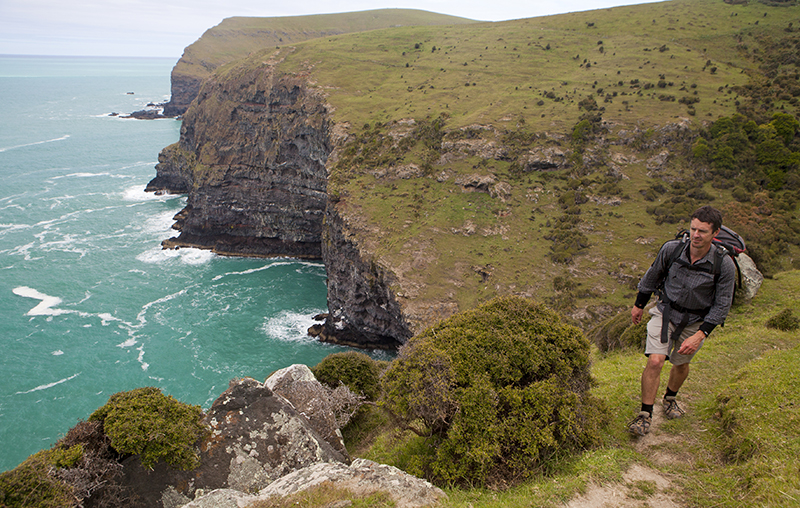 A curiosity of New Zealand tramping is its network of privately owned walking trails. Prime among them is this 35-kilometre hike through farmland and craggy coastline outside of Christchurch.

The track begins with a climb to the crater rim of an old volcano encircling Akaroa Harbour and then down to stony beaches, the largest little penguin colony on New Zealand’s mainland, and a rugged basalt coastline pounded by the Pacific Ocean.

There’s even a sea stack that was a sea arch until it collapsed in the 2010 Christchurch earthquake. The track can be walked over two or four days, staying in farmhouse accommodation along the way. •