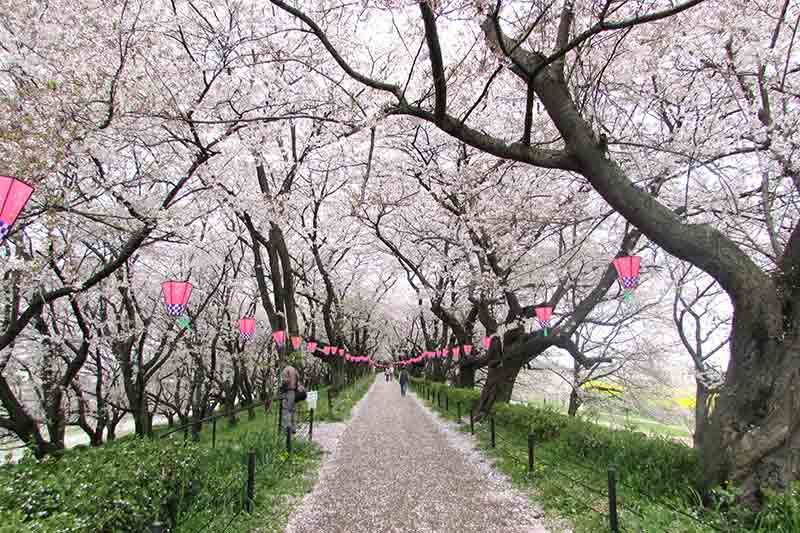 Springtime in Japan is a most spectacular time of year, when the country’s iconic cherry blossoms come into bloom, painting the landscape in a soft palette of pink and white. Mostly taking place during the months of March and April, “sakura” season attracts locals and visitors from all over the world to partake in what is known in Japanese as “hanami” – the joy of viewing and celebrating cherry blossoms. The tradition of hanami has been practiced since ancient times, and throughout the season, you can expect to see blossom-themed events and festivals taking place all over the country, as well as a range of sakura-themed souvenirs, gifts, food and drinks readily available everywhere you go.

From blooming to falling from the trees, peak cherry blossom time is fleeting, typically lasting no more than two weeks, and there are many amazing spots from which to view them. One of the best, easiest and most cost effective ways to get around and explore the viewing areas is by rail.

Tobu Railway is a scenic rail line which starts from Tokyo’s Asakusa station, covering the metropolitan area and travelling all the way up to the northern part of the Kanto region, offering incredible cherry blossom viewing spots, as well as many popular tourist attractions, along the way.

Here, we’ve rounded up the best hanami spots along the route, and with Toby Railway’s all-new limited express service running from Tokyo all the way up to Nikko/Kinugawa Onsen, there’s never been a better time to jump onboard. 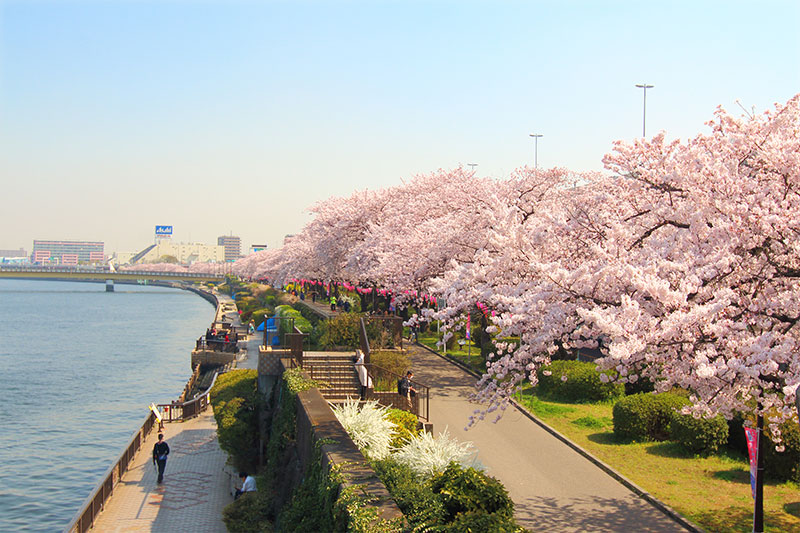 One of the most popular sightseeing spots in Tokyo, Asakusa attracts many visitors year-round. Tobu Asakusa station is just a three-minute walk to Tokyo Skytree Town, one of the most popular attractions in Japan with the iconic Skytree Tower – the tallest tower in the world, reaching 634 meters high into the sky.
Nearby, you’ll find Sumida Koen Park, renowned for its beautiful cherry blossom trees, of which the first trees were planted by the eighth Shogun of the Edo Shogunate in 1720 to control floods. There are around 640 cherry blossom trees which line approximately one kilometre along both sides of the Sumida River, with a view of the Tokyo Skytree providing a picture-perfect setting. Many food stalls set up here during the season selling traditional sakura-themed sweets and treats, and after sunset, the cherry trees become illuminated, offering an entirely different experience altogether. 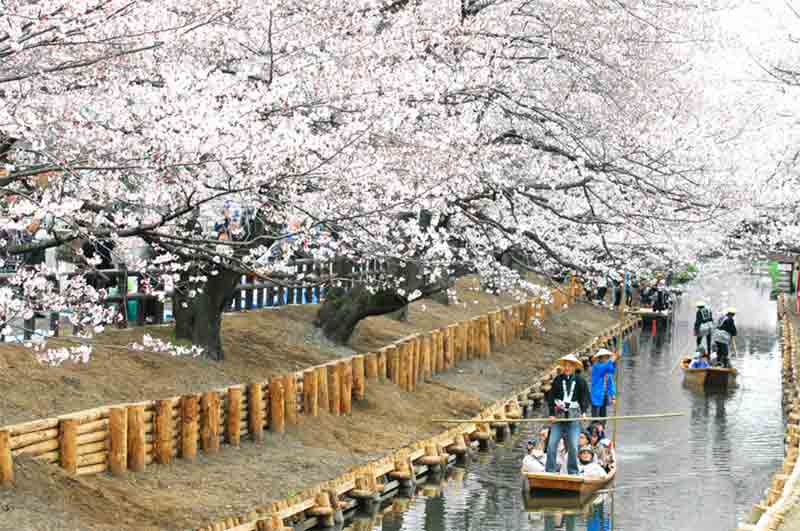 Located around 30 minutes northwest of Tokyo by train, Kawagoe City oozes history and culture around every corner. With its many temples, shrines and other historic buildings and monuments, it is a great town for exploring by foot and attracts around six million visitors per year. It’s also a great place for trying traditional, seasonal Japanese food and picking up a sweet treat along Kashiya Yokocho (Confectioners Street).
Behind the Kawagoe Hikawa Shrine, you’ll find the Shingashi River flowing, where cherry blossom trees bloom profusely for approximately 500 metres along the riverbank. Their reflection on the water’s surface alongside floating petals makes for a spectacular sight. 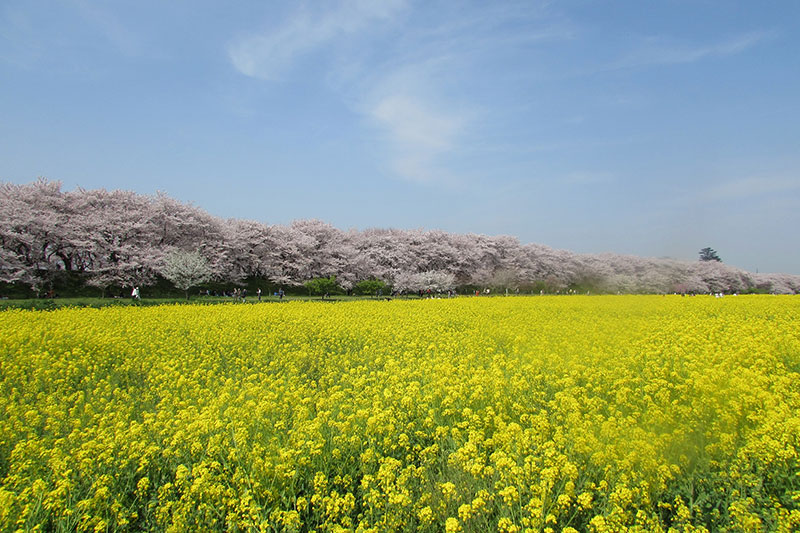 This beautiful flower park boasts 4,000 different types of flowers. There are approximately 200,000 moss phloxes here which create a vivid pink carpet when they are in flower. They come into bloom the same time as the cherry blossoms, making for a truly magical setting. Each year in spring, the Moss Phlox and Spring Garden Festival takes place here, offering visitors the opportunity to enjoy Japan’s stunning springtime flowers in all their glory. Straight after the festival, on 8 May, is the Rose and Garden Festival, at which 3,000 roses, of 1,500 different types, come into full bloom.
Tobu Treasure Garden is just an hour-and-a-half’s journey by train from Asakusa Station. 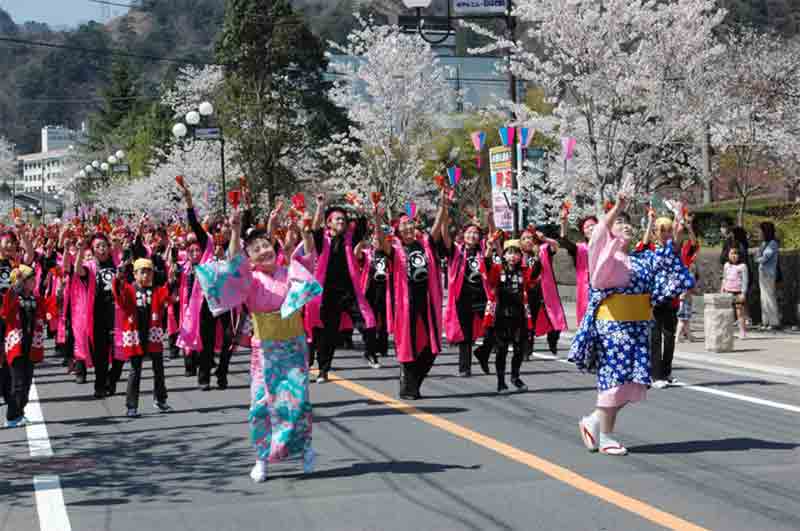 Thanks to its impressive collection of shrines, temples and other historic buildings, Nikko is a popular place for sightseeing. It is home to Nikko Toshogu Shrine, Nikkozan Rinnoji Temple, and Nikko Futarasan Shrine, as well as many places of natural beauty such as Kegon Falls and Lake Chuzenji, attracting visitors all throughout the year.
Cherry trees along the Sakura-Namiki Street in Kinugawa-Onsen will be in full bloom in the beginning of April, and various events such as the Yosakoi Parade will be held in front of Kinugawa-Onsen Station, approximately two-hours’ train journey from Tokyo’s Asakusa Station. 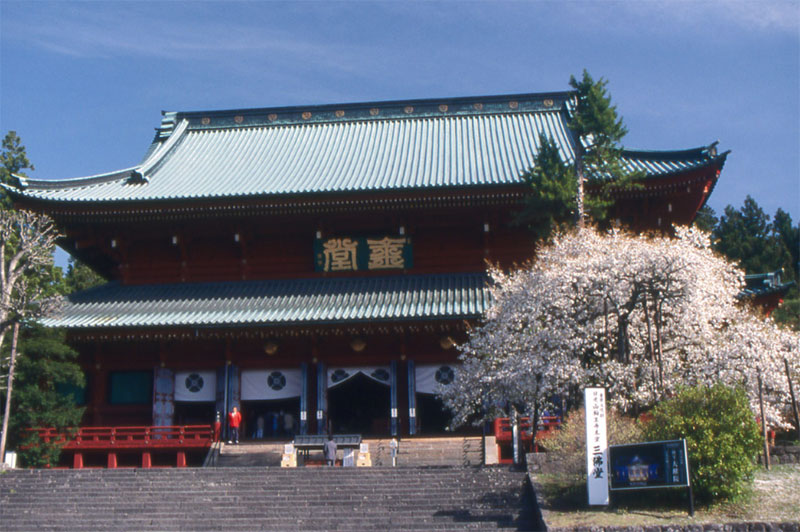 This beautiful temple is currently undergoing a renovation of its main hall, meaning now is the only time visitors can enjoy the view from the observation deck at at a height of 26 meters. You can look out over the town of Nikko and see tree blossoms blooming alongside World Heritage listed buildings and monuments. Keep an eye out for “Kongo-Zakura”, a cherry tree in front of Sanbutsudo estimated to be 500 years old and a designated natural monument. 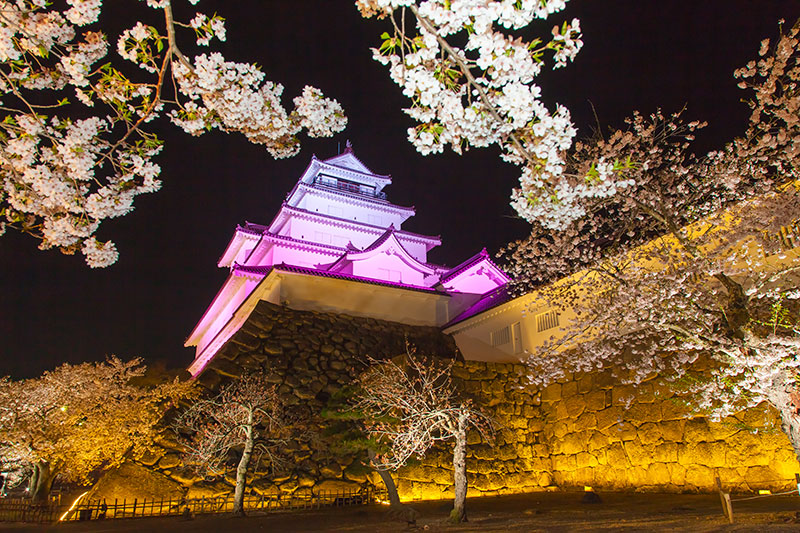 With around 1,000 cherry trees blooming in front of the iconic Tsurugajo Castle, this park is one of the best cherry viewing spots in Japan. You can also pay an entry fee to go into the castle, which is the greatest castle in East Japan, and view the beautiful blossoms from the castle tower, and in the evening, see them being reflected alongside the castle on the surface of the moat.