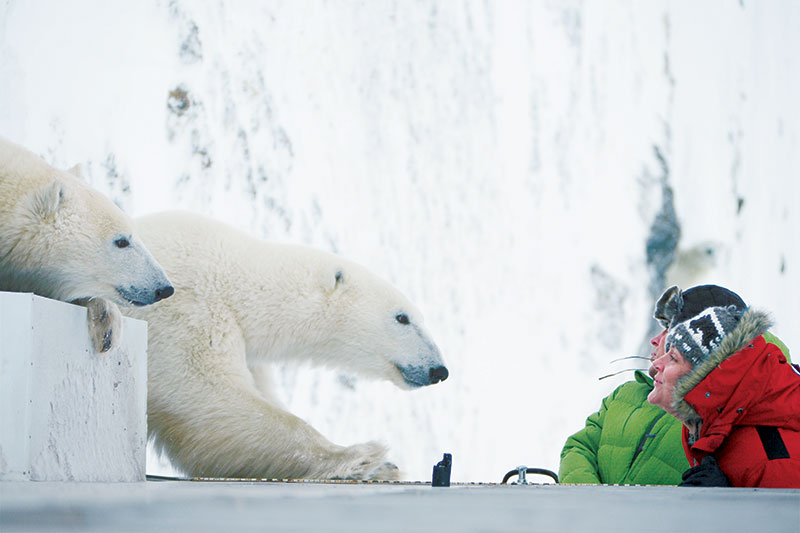 Norse poets got it right when they called polar bears “great lonely roamers” and the “sailors of the floes”. As the first rays of sunlight are licking the snow-covered tundra, “bear fever” sets in as we wait for those lonely roamers to appear.

A group of animal lovers has flown half-way around the world and travelled across Canada to see the polar bears of Churchill in the wild and that first sighting is much anticipated.

Tucked up in bed looking out the window of our cosy Tundra Lodge on wheels, I take another look outside and my heart beats faster. A hefty polar bear lumbers across the snow and ice to take centre stage in front of a mesmerised audience – with bed hair. But no-one worries – this trip is all about the bears. Soon, another polar bear appears and moves slowly towards our home on the ice and starts poking around the two-metre-high wheels, then takes a few steps back and plonks himself down to join the game of “watching them watching us.”

No matter how many television documentaries you have seen or books you have read nothing quite prepares you for the thrill of seeing these magnificent animals in the wild. Soon several others saunter up looking curious and just a tad mischievous. Like naughty children, they poke and prod each other and then tumble, roll and somersault as if they are playing a game while the next minute they give their sparring mate a good clip around the ears – that’s polar bears for you.

Every November, they gather at Cape Churchill in northern Manitoba on the west shore of Hudson Bay to wait for the ice to form while indulging in a spot of early season seal hunting. It provides a pocket of opportunity for animal lovers to see the bears in action, taking a nap, sparring, searching for lichen and amusing themselves to fill in time.

A great way to see polar bears is with Frontiers North Adventures that as well as day trips, operate the Tundra Lodge on wheels that is stationed 20 kilometres east of Churchill, right in the heart of polar bear territory.

Each day we head out to watch polar bears interact with each other on the snow and ice from the safety and comfort of a Tundra Buggy with knowledgeable guides, who have many bear stories to tell. 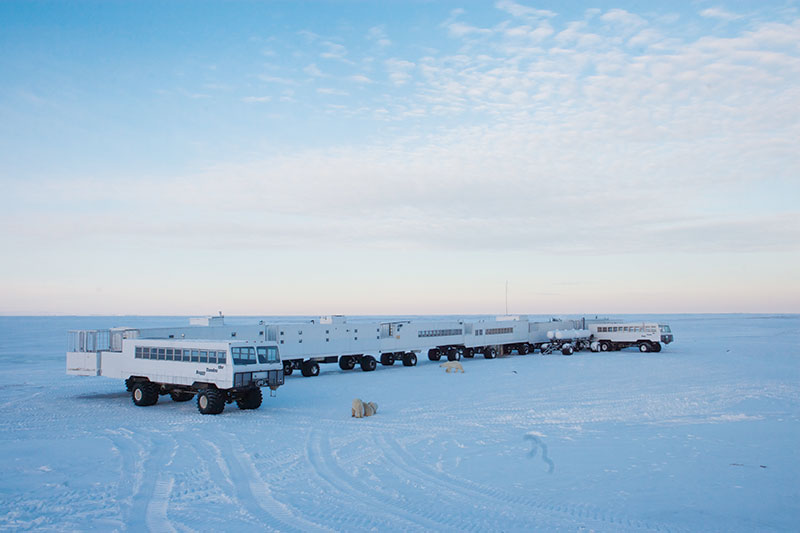 Specially designed, the all-terrain vehicles travel into the Churchill Wild Management Area. The heated buggy is warm but we still dress in snow gear to combat the chills of minus 14 degrees and icy cold winds. It can get to minus 30 degrees our guide, wildlife biologist, Angele Watrin tells us. Outside on the viewing platform we take photos as the bears wander by or stand up on the side of the buggy to see what is going on.

While we are chatting there’s a bang and a big furry paw slams down on the step below us providing a great view of their enormous paws and sharp talons that easily rip their prey apart.

“Polar bears are so inquisitive and very entertaining but even though they look cute and cuddly they are very dangerous,” says Angele, who points out other animals living on the tundra including a Snowy Owl perched on the rocky shore of Hudson Bay. But it is the future of the environment of these polar bears that has us most concerned.

Dr Steven Amstrup, the chief scientist at Polar Bears International that is sponsored by Frontiers North, says global warming is posing a threat to their future by altering summer time ice flows and feeding patterns. It is predicted that two thirds of the 22,000-strong polar bear population will be lost by 2050 because of global warming.

But he believes it is not too late to implement steep and rapid greenhouse gas reductions to preserve the sea ice world that polar bears require. As well as research, Polar Bears International also televise classes about polar bears and the environment to schools. 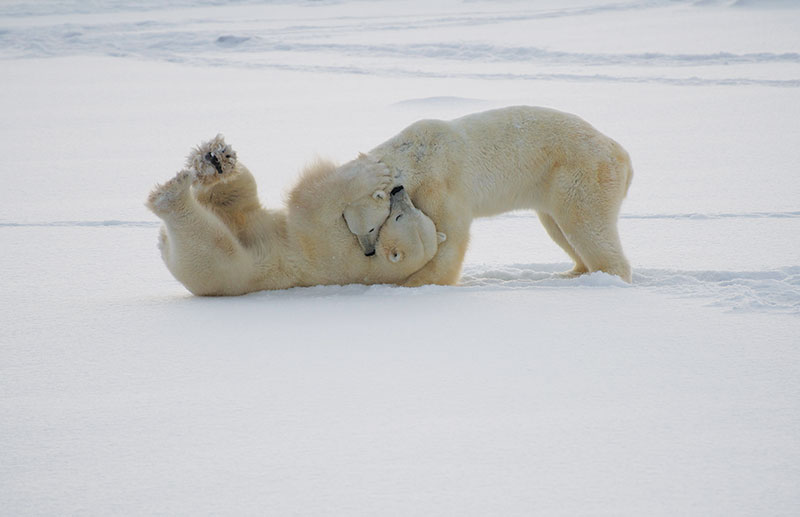 After a day of bear watching we return to the lodge where “lodge momma” Emma Acorn serves delicious muffins. Meals are served in a cosy dining room with pancakes and bacon and eggs for breakfast, homemade soup, sandwiches and salads for lunch eaten in the buggy and for dinner, regional treats such as bison and arctic char are often served.

The dormitory style accommodation has upper and lower sleeping berths, each with a window and reading lamp, adjustable heating and a sound-dampening curtain for privacy, separating the berths from the aisle. Each unit has three shared bathrooms. We also stay a night in Churchill, known as the polar bear capital of the world, where residents don’t lock car doors and leave their front and back doors open for a good reason. They provide a quick escape for anyone who may run into an inquisitive polar bear looking for food. Although uncommon, there are tales of residents coming face to face with a polar bear or seeing a large paw come through an open window.

Churchill, with a population of about 900, even has a polar bear lock up with 26 cells where rogue polar bears who stray a little too close to the town are locked up for 30 days and then relocated.

After three days, our polar bear viewing tally is 30 and we leave with thousands of photos and a lifetime of memories of these incredible animals.

Bears at Knight
Bear lovers can also see black and grizzly bears in Canada and for a great adventure head to British Columbia’s Knight Inlet. Our base is the quaint town of Telegraph Cove with a permanent population of 20 and we head out with Tide Rip Tours in search of bears. Telegraph Cove is tucked away on the eastern coast of northern Vancouver Island in one of the virtually untouched areas of Canada.

The town, which is built on stilts with a boardwalk connecting it to the mainland, has a rich and colourful history built on a sawmill and cannery industry. Each of the cabins along the boardwalk has its own story and legend has it that a cougar was shot under one of the cabins. The exteriors are painted bright blue or red and they have been restored to their original condition.

The settlement derived its name from the establishment of a telegraph station in 1911 and in the early 1920s a Japanese salmon saltery and a sawmill was built to cut logs to build boxes for shipping the salmon. But today it is all about bears in nearby Knight Inlet that make an appearance as the snows melts in spring and they emerge from hibernation dens on the mountain slopes. 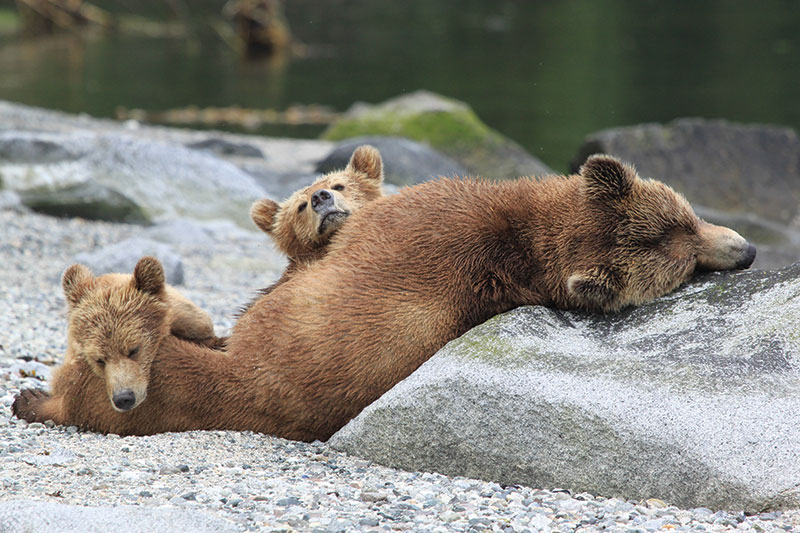 We cruise 30 minutes to Knight Inlet and right on cue we see a big grizzly on the beach just in front of us hunting for food. Looking a little lean after coming out of hibernation, the bear has only one thing on his mind – food. He pays little attention to us and carries on with his scavenging as cameras click like paparazzi with a herd of Kardashians.

Knight Inlet is set in the most spectacular scenery. Majestic snow-capped mountains give way to steep cliffs covered in green cedar trees, a strip of rocky beach and then bright blue glacier-fed water. But it is hard to take your eyes off the grizzlies as they lope around the beach. Another bear appears not far away and our guide tells us it could be interesting as bears like their own space. But today they are too hungry to worry and continue tossing boulders about like they are pebbles, hunting for crabs, barnacles and mussels.

Knight Inlet is one of the largest fjords on the British Columbia coastline and Glendale Cove is renowned for its large concentration of grizzly bears. In peak season you can see as many as 50 bears hunting for salmon and feeding them to their cubs in the rivers and streams. We also see black bears on the low tide beaches, bald eagles and a river otter.

After a while, we move further up the cove and there is a sight to behold – there are five bears all enjoying the spring sedge grasses in the river lowlands. It is a real teddy bears’ picnic and just like those polar bears – they know how to put on a show. •

Getting there
Air Canada flies from Sydney and Brisbane to Vancouver. aircanada.ca