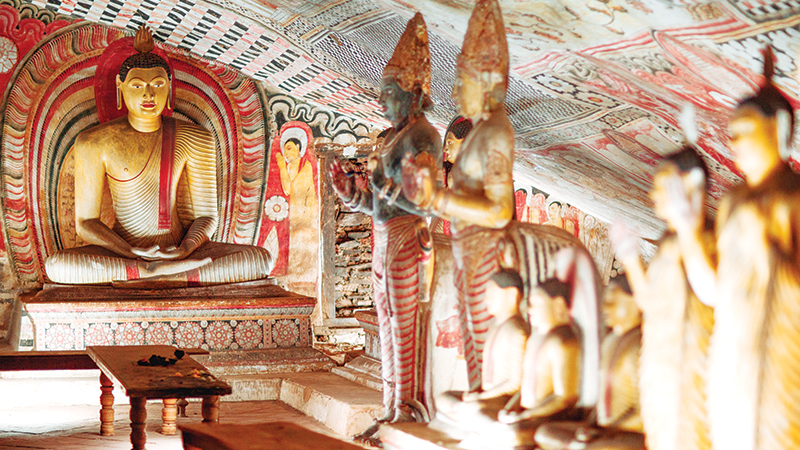 Returning from travel, a piece of your destination inevitably comes home with you. But, there are few places around the world that leave an indelible impression, countries that become part of your very being.
Sri Lanka is one.

The country has had a less-than-sparkling reputation in recent times, with a brutal civil war dividing the nation for decades. But, over the last five years, Sri Lankans have enthusiastically embraced peace, and a recent change in government sees the people increasingly hopeful that the generations of graft and corruption are over. Green shoots, both literal and figurative, are emerging around the nation.

This newfound optimism is drawing tourists in record numbers, few of whom would find themselves disappointed. The island’s ancient Buddhist culture is immaculately preserved, with sublime architectural ruins and truly beautiful artworks displayed in staggering numbers. Its cuisine, lighter, faster and fresher than its Indian counterpart, is abundantly available. Its natural environment is biodiverse in the extreme, with mountainous forests giving way to tropical lowlands and world-class surfing locations. And, its people, of course, are unbelievably hospitable – particularly if you can hold a conversation about rugby or Ricky Ponting.

In short, for most people who visit the sapphire isle, their first, revelatory visit is highly unlikely to be their last.

Sigiriya shines
For centuries, tourists have travelled to Sigiriya, a giant magma plug jutting out from the lush forests that surround it. In part they’re drawn to its imposing, dream-like presence, like a cloud made out of rock. Others scale it for the mysterious ruins of King Kassap’s palace on the roof of Sigiriya, which you enter through an enormous pair of lion’s paws. But most come for the frescoes, delicate paintings of ample young women in the Tantric Buddhist tradition, painted on a ledge in the rock over a thousand years ago.

The marvel that is Anuradhapura
Anuradhapura, the ancient, sacred city that was the country’s capital as far back as 380BC is every bit as affecting as the Pyramids at Giza. Giant dagobas are strikingly serene, jutting almost 100m out of the jungle. The weighty boughs of the world’s oldest tree, the Sri Maha Bodhi, grown from a cutting of the tree under which the Buddha found enlightenment, rest on golden scaffolding. Monks and pilgrims move quietly around the temples and eat contentedly in the gardens. This exquisite city alone is worth the trip to Sri Lanka. 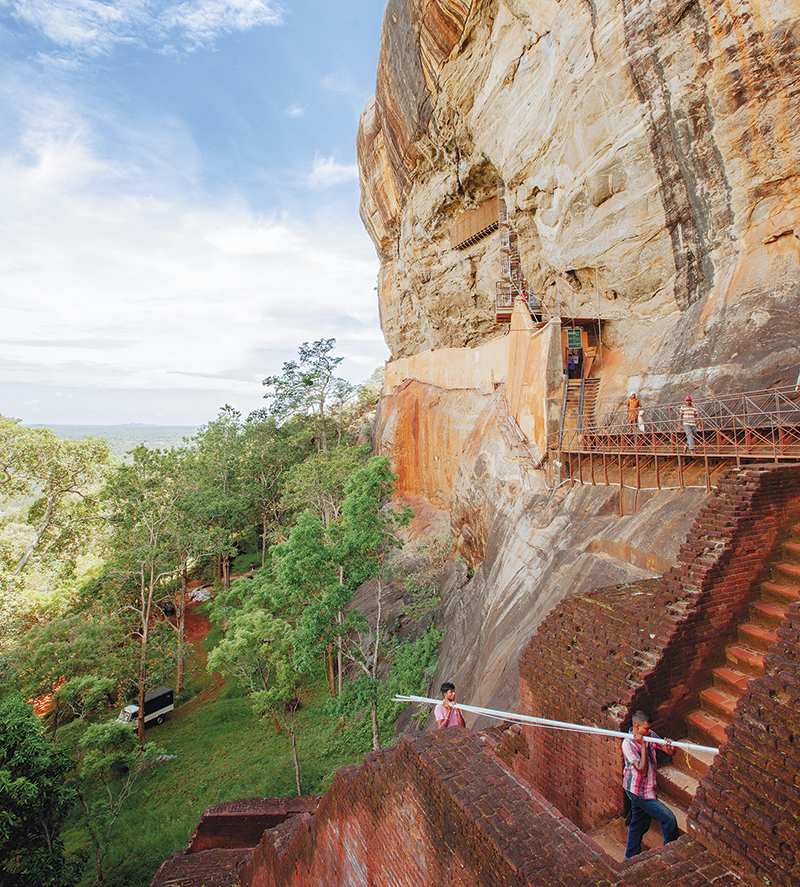 Elephant Safari
The Elephas maximus maximus, a sub-species of elephant particular to Sri Lanka, is smaller than its African cousins, but no less endearing. Taking a Land Cruiser out into Minneriya National Park, you’ll see herds of elephants walking trunk-to-tail, grazing the grassy plain, and wrangling their inquisitive calves. If you’re very, very lucky, you might even see a leopard as a bonus.

History lives at Kandy House
Though there’s five-star accommodation all across Sri Lanka, one of the most fascinating hotels is the relatively-tiny Kandy House. Built in 1804, by the last Chief Minister of the Kandyan Kingdom, Ratwatte Adigar, Kandy House is both eccentric and luxurious. Current owners Tim and Sarah Jacobson have sensitively restored the traditional villa, with tasteful antiques and up-to-date fittings throughout the nine rooms. If staying in such palatial surrounds is a touch outside your budget, you can still visit for lunch or dinner to eat like a king – if only temporarily.

The Temple of the Tooth
Meanwhile in the nearby city of Kandy, the Temple of the Tooth houses one of the nation’s stranger treasures. Said to house a real tooth from the head of Gautama Buddha, the relic has been central to Sri Lankan rulers since the fourth century. Pilgrims dressed in white and monks in orange queue morning, noon and night to pay homage to the tooth, laying flowers and incense before it. Ritual drummers beat out a rhythm, which reverberates through the golden canopies of the temple. It’s all-in-all otherworldly.

Tea anyone?
Even if you’re unfamiliar with Sri Lanka, chances are you’re familiar with one of their most famous exports: Ceylon tea. Established by the British colonies, quality tea remains one of the lynchpins of the Sri Lankan economy. Its production, meanwhile, is absolutely fascinating. Grown on steep terraces in the island’s hilly interior, teams of Tamil pluckers harvest handfuls of deep green leaves. Then, workers in enormous drying rooms sort the tea and allow it to ‘wither’ before it’s dehydrated in massive barrels. There are a number of ways to visit a plantation, the most luxurious among them Dilmah’s Ceylon Tea Trails, where you can stay in bungalows built for the estate managers, nestling in the hillside above a sweeping view of the plantation. 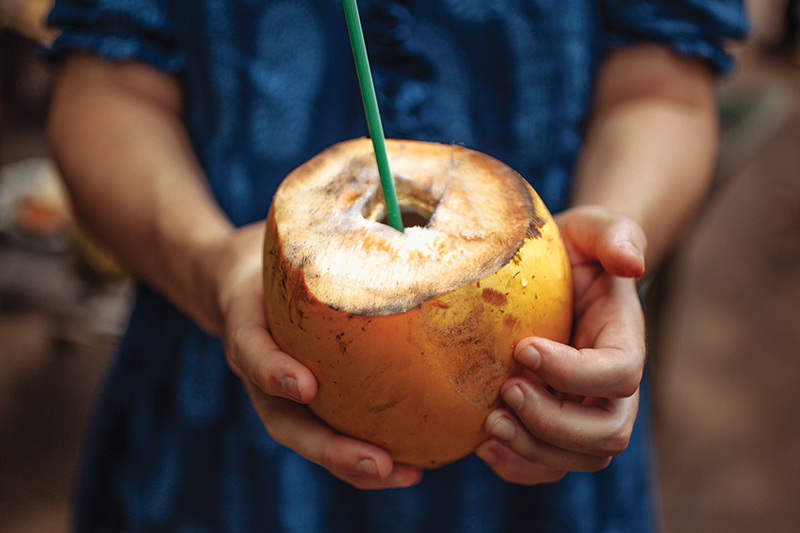 Life in Pettah
The beating heart of Sri Lanka’s biggest city, Colombo is undoubtedly Pettah. It’s an intriguing amalgamation of the local and colonial. Dutch mansions sit alongside British architecture, while Colomboans busily go about shopping at bazaars and markets, play cards and improvise cricket tournaments in the dust. Nearby is the Old Dutch Hospital, a low-slung building constructed in the 17th century and recently restored by the standing army, which now houses what aspires to be Colombo’s restaurant quarter.

The caves of Dambulla
Built into deep caves on the side of the mountain, Dambulla is a network of five caves housing an incredible collection of ancient Buddhist art. Built over 2000 years ago, the dimly-lit caves feature 150 sculptures and paintings, highly-detailed and expertly-wrought likenesses of the Buddha. Most impressive are the truly enormous reclining Buddhas, lounging the length of the cave. It’s particularly beautiful in the rain, standing under the long white portico with water flowing down over the rocks above.

Fly me to the moon at Polonnaruwa
Another former Sri Lankan capital is Polonnaruwa. A UNESCO World Heritage site, the city is home to some of the country’s most incredibly preserved architecture, with temples, palaces and council chambers largely intact. There’s also a beautiful rendition of the Sandakada pahana, or the Moon Stone, an entry stone with an intricately-carved representation of the wheel of life, with elephants, lions, and flames in procession around the semicircle.

Try Coconut Roti by the street
While the restaurant scene is still somewhat nascent, Sri Lanka’s street-food culture couldn’t be brighter. The simplest pleasure is found at roadside stalls, where busloads of workers stop to buy thick, warm, coconut roti, dusted with flour and slightly smoky from the wood fire they’re cooked over. They’re immoderately improved by a slather of incendiary sambal made from fat, squat and incredibly hot chilli – which can be counteracted with the juice of a king coconut, its top sliced off freshly for you. 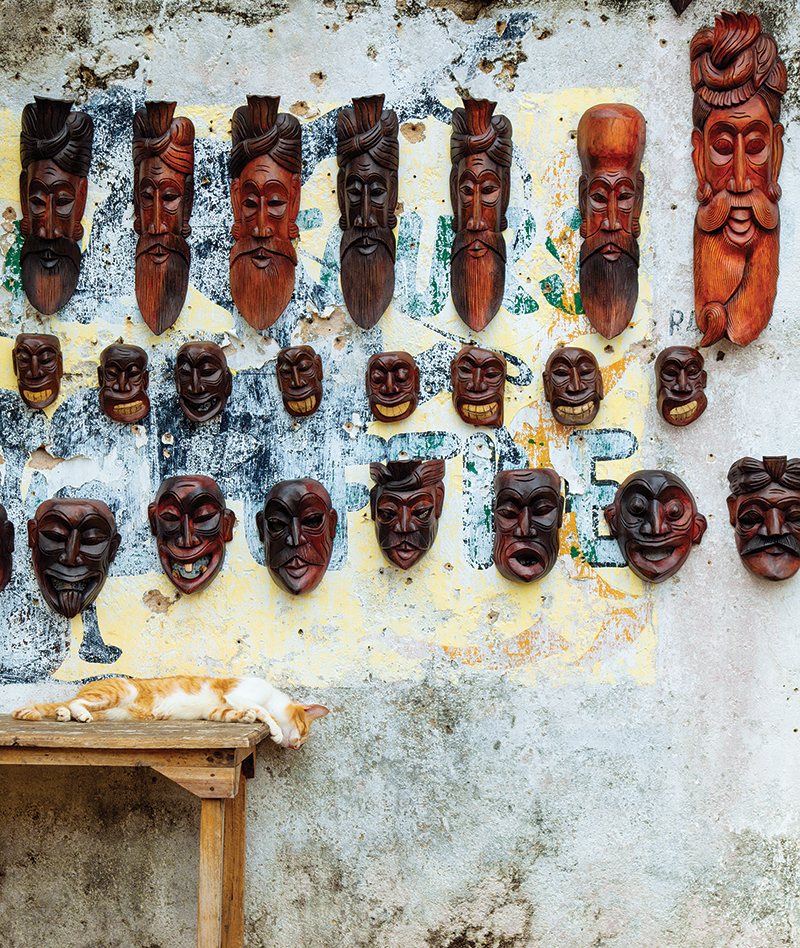 High Tea at Amangalla
Amangalla is not merely a hotel. Sure, the standard at this boutique venue, with its carefully-curated antiques and sensitive service is entirely world-class. But it’s also a UNESCO World Heritage site built in the walls of the 400-year-old Galle Fort, a sweet little microclimate of colonial history. Sitting in the wide verandah, the Pawa trees at the window, with cucumber sandwiches, petit fours and a cup of orange pekoe (not to mention a Beefeaters and Tonic) is one of the planet’s greatest guilty pleasures.

Paradise Road Gallery Café
If one figure looms large in Sri Lankan culture, it’s the architect Geoffrey Bawa. Though you’ll come across his beautiful buildings around the country, one of the most striking examples is Paradise Road. A lush, hidden oasis from the Colombo streets, the venue was not only designed by Bawa, but was in fact his personal office. A beautiful fusion of modernist austerity and tropical sensibilities, the gallery and café seamlessly blends inside with out. And, there’s a broad range of both western and Sri Lankan cuisine, the highlights of which include a prawn curry with sauteed kangkung and onion sambal, and its signature dish, the Black Pork Curry with brinjal pahi, cucumber raita and gotukola sambal, both done with an impressively light touch. •

Getting There
Singapore Airlines has a daily service to Colombo ex Melbourne and Sydney via Singapore. singaporeair.com

When To Go
Characterised by a hot, tropical climate the best time to travel to Sri Lanka is between December and April when conditions are generally more temperate and humidity lower. Monsoonal conditions occur May to September with rain generally in the mornings and late afternoon.