From the jungles of Indonesia to the beaches of Vietnam, Banyan Tree delivers the complete holiday experience.

TWENTY-one years ago, the first seeds of the Banyan Tree Hotels & Resorts brand were planted in Phuket. Now, the group has branches around the globe, including the Banyan Tree Bintan Island in Indonesia and Banyan Tree Lang Co in Vietnam.  While the superior standards and excellent service remain consistently “same same”, each resort is also delightfully different.

It’s easy to imagine why the Javanese Rhino and Sumatran Tiger used to roam this lush land, all jungle green eventually conceding to the bright blue South China Sea beyond. But hunted for their horn and skin, these exotic animals no longer form part of the story of Indonesia’s Bintan Island, which is now home to mammoth monitor lizards, cheeky monkeys, brazen birds, and hapless humans searching for “rustic luxury” a short ferry ride away from Singapore.

On this particular day, somewhere in the distance, the sultry scent of clove cigarettes lingers in the air and mingles with the words of “Swiss by birth, Australian by choice” Bintan Island Banyan Tree General Manager Stefan Thumiger who is explaining the concept they have created here, employing local Indonesians, many of whom have clocked up 20 years at the resort.

“I’ve worked in many countries around the world but the staff I’ve had here are the best I’ve ever had. What else do you want but somebody who really cares about you and looks after you? They are not here to do a job, it is a passion,” he says. 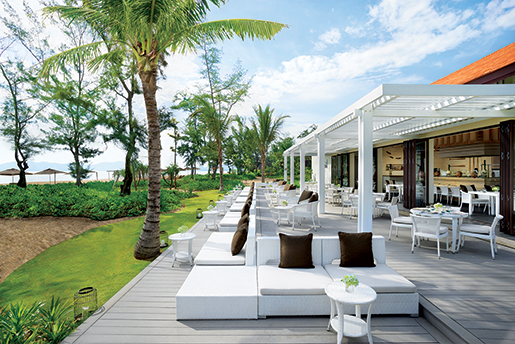 “There is some really exciting stuff coming to Bintan and it is going to be great and put the destination back on track. What is great is there are more and more activities happening now. We’re 45 minutes away from Singapore, ferries will be increasing and we have Singapore drinking water and Singapore standards.

Stefan points out the pitched Balinese roofs, or alang alang, all hand-made and weaved, which capture the spirit of Indonesia. It’s a theme which is sprinkled throughout this resort including its Treetops Restaurant which perches high above the water where a bright blue Indonesian fishing boat waits patiently for its catch below. Glance out at the horizon, and on one side you can peek at Singapore, on the other, sits Malaysia. Yes, here you are in the throbbing heart of Asia but at a delicious distance from the colourful chaos for which it is renowned.

Measuring some 23,188 square metres and part of the Riau group of islands, Bintan is believed to be some four times the size of Singapore. The Banyan Tree itself consists of 64 luxury villas and is home to an integrated resort concept which incorporates sister brands and neighbouring properties Angsana, and the new Cassia development – all three named after plants or trees.

But while Angsana is home to an impressive conservation lab which protects hawksbill and green turtles, it’s the Banyan Tree property which steals the show here. The resort offers a number of exotic and innovative dining options designed to take advantage of its natural environment and one of the most popular is the Dinner of the Legend, in which an Indonesian Rijstafel – which literally translates into “rice table” – is served. This “destination dining” experience will lead you to the beach where you’ll sit among billowing chiffon and be served 12 courses, among them long bean and minced chicken salad in spiced coconut milk; and Javanese jelly coconut milk and palm sugar. 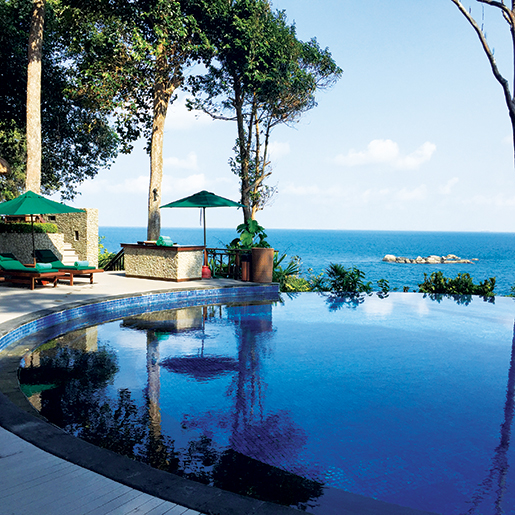 By the beachfront in Danang

Delectable dining is the hallmark of any Banyan Tree experience and you’ll discover more at the Banyan Tree Lang Co in Vietnam. Easily accessible via Danang Airport, you’ll drive along the long, lazy Danang beachfront with its fold-up chairs on which you can consume Vietnamese coffee and local beer; and past rice paddies, mountains and sand dunes before arriving at this remote beachside destination. But while this resort may be isolated, no stone has been left unturned when it comes to detail. Capturing the lantern and fishing elements of the charming World Heritage City of Hoi An about 90 minutes away, there are 49 luxury villas here, in which a Vietnamese art master and his five students have painted individual lotus flowers on a giant feature wall behind each bed. The villas themselves are inspired by traditional Hue garden houses and an elaborate coin design on the doors and lamps relates back to the Nguyen Dynasty – the last ruling family of Vietnam who held power for 143 years from 1802. Coffee tables around the resort are also replicas of a drum which dates back 4000 years and there’s even a gong to announce the arrival of guests.

The hotel’s nearby Organic Farm, run by Executive Chef Anders Ho Groenholm, is a highlight of a stay here and the reason behind why the food served at the resort tastes as fresh as if it had arrived from a Vietnamese grandmother’s kitchen itself.

“This organic garden was made last year and we are very proud of it,” Anders says.

“The purpose as a chef is to be able to handpick ingredients to avoid pesticides so we know for a fact that it is organic.

“Herbs are a big part of Vietnamese food. We will go in the morning with a little basket and pick out only what we need for the day.” 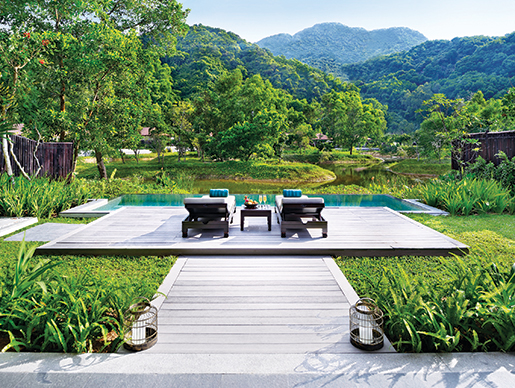 Guests at the resort can partake in a cooking class smack bang in the middle of the farm, among garden beds of fresh basil, mint, mustard greens, tomatoes and lettuce. It was these ingredients that the hotel used last year to create the world’s largest spring roll measuring 520 metres from the Banyan Tree to its sister resort Angsana. Utilised as part of a team-building exercise, 120 staff dined on the giant spring roll which consisted of 600 pieces of 1 metre rice paper sheets; 40kg butter lettuce; 60kg sliced carrots; 60kg sliced cucumbers; 70kg papaya; 25kg fresh Vietnamese mint; and 25kg fresh Vietnamese basil.

But arguably the most charming feature of this establishment is its links with Hoi An, where it runs a restaurant called Seedlings. Under the motto: “Plant a seed, change a life”, the Banyan Tree Lang Co works with local NGOs to identify youths at risk and provide hospitality training in Seedlings. Around 36 students have been through the program since it started about two years ago, and many of them have been offered opportunities at the Banyan Tree and Angsana or other five-star resorts in the region.

One suspects that even those who first envisaged the Banyan Tree concept some 21 years ago would never have imagined how each hotel and resort would interpret the tale in those distinct destinations around the world. The brand now boasts 30 resorts and hotels, 70 spas, 90 retail galleries and three championship golf courses in 28 countries.

Casting its origins back to the original Banyan Tree, which was designed to provide shelter to weary travellers, the Banyan Tree group continues to tend to its tourism garden, sowing its seeds and spreading its branches in the sophisticated style with which it is synonymous.

•    Scoot Airlines has regular flights from the Gold Coast, Melbourne, Perth and Sydney to Singapore. flyscoot.com
•    The Tanah Merry Ferry Terminal is about a 10-minute taxi ride from Changi Airport. There are several ferries each day to the resorts on Bintan Island, including the Banyan Tree. booking.brf.com.sg
•    To travel to the Banyan Tree Lang Co, SilkAir has regular flights to Danang from Singapore. silkair.com

Bintan Island: Due to its proximity to the Equator, the weather on Bintan Island remains relatively the same all year round and is hot and humid. The wet season, when temperatures are slightly cooler, runs from around November to March. Lang Co: The northern hemisphere winter/Australian summer is the best time to visit this part of Vietnam which becomes hot and humid during the northern summer (June to August).