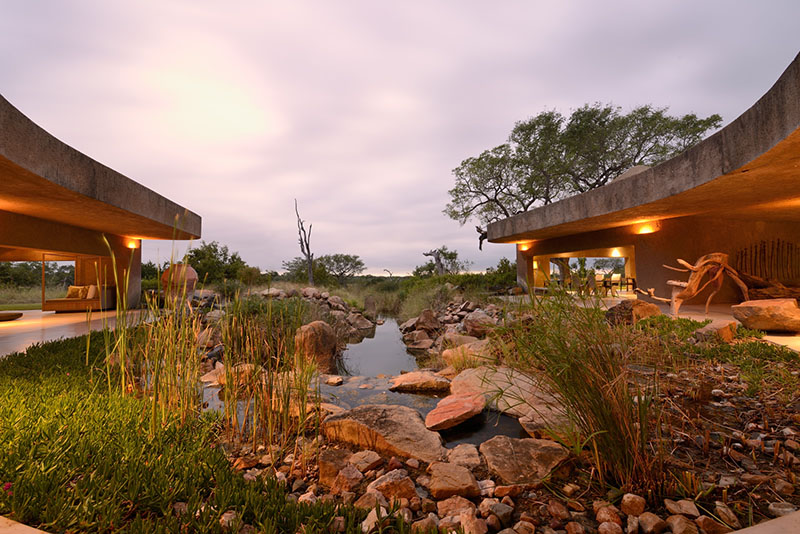 Our safari vehicle sputters to a halt in the middle of a dry river bed and our guide, Ryan de Beer, instructs us to shut our eyes. Thinking we had broken down and there was a rampant lion on the loose, I was happy to oblige.

Peeking through fingers – my sense of curiosity always gets the better of me – I can’t see or hear any hungry big cats. In fact, I can hear a big, fat, nothing.

“You can open them now”, says Ryan, and we obey, gasping as we look up to a sky all aglitter with a zillion stars. It is quite a sight and just adds to that feeling that we are in a land that time forgot, shelved somewhere for another day. 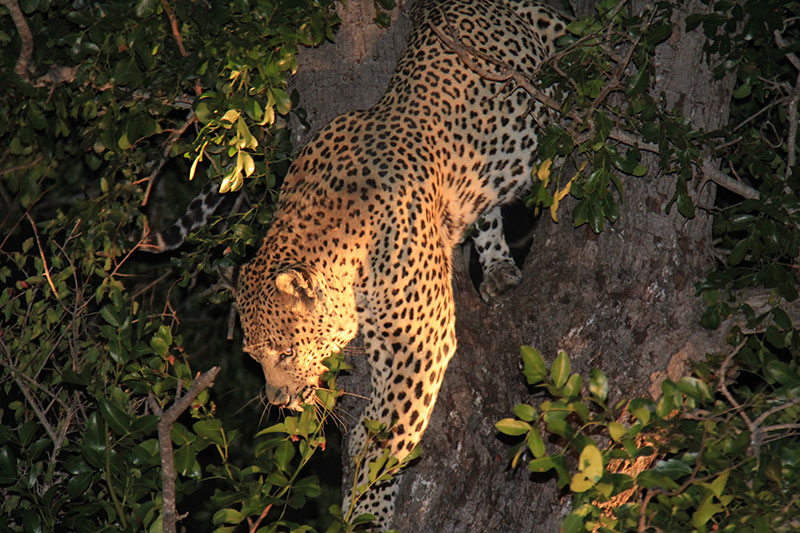 The dry landscape with its cover of scrappy bush, marula and leadwood trees, is waiting for the spring rains to come to life, but while it might look brown and uninspiring, it makes it easier to spot the wildlife that lurks, slinks or flies beyond.

And in this corner of Kruger National Park, in the Sabi Sabi Private Game Reserve, there is plenty of it. We bump off before the sun is truly up in the mornings and again before the sun sets over the savannah, when the animals are likely to be up and about to escape the heat of the day.

We linger under trees watching leopards snacking on kills they had dragged up into branches, and caught our breath at one sighting, as the leopard climbed down the trunk, defying gravity, before lying down mere metres away, licking his paws and cleaning himself like our Burmese cat at home. They are magnificent animals up close. 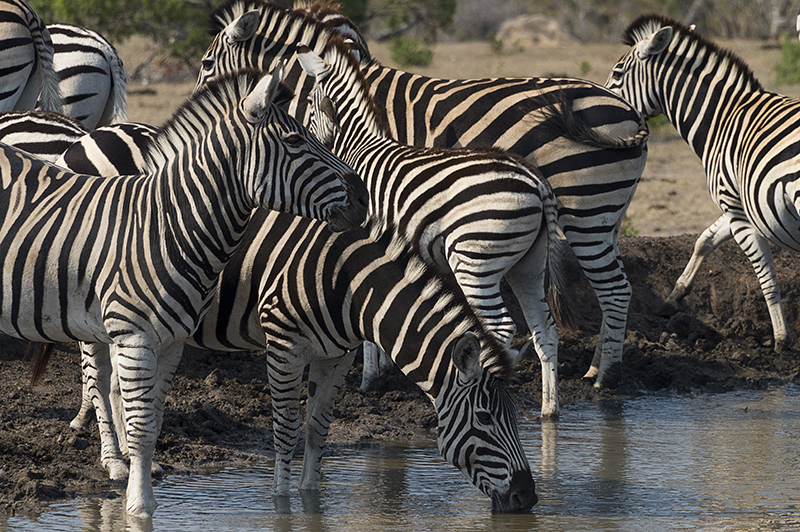 We stop on several occasions to watch the Southern Pride of lions going about their business. The first time, they are sleeping under a scraggly cluster of bushes trying to stay in the shade, one of the adult males showing a large – very large – tooth sticking out at an unseemly 90-degree angle. Ryan reads our minds and tells us that he had been kicked in the mouth by a giraffe.

The second time, there is much more action, with the Pride enjoying the fruits of a successful hunt. We watch as first the males, then the females and lastly the cubs take their turn at a buffet of a ‘duo of buffalo’ lunch, and find a third one, set aside for dessert, being guarded by another male a short distance away.

Another day we are so close to a pack of wild dogs, complete with hyperactive pups, playing boisterously with what looks suspiciously like a warthog tail. These endangered dogs are the marathon runners of the animal world, loping easily along, chasing their prey until the animal runs out of puff, making it an easy meal. 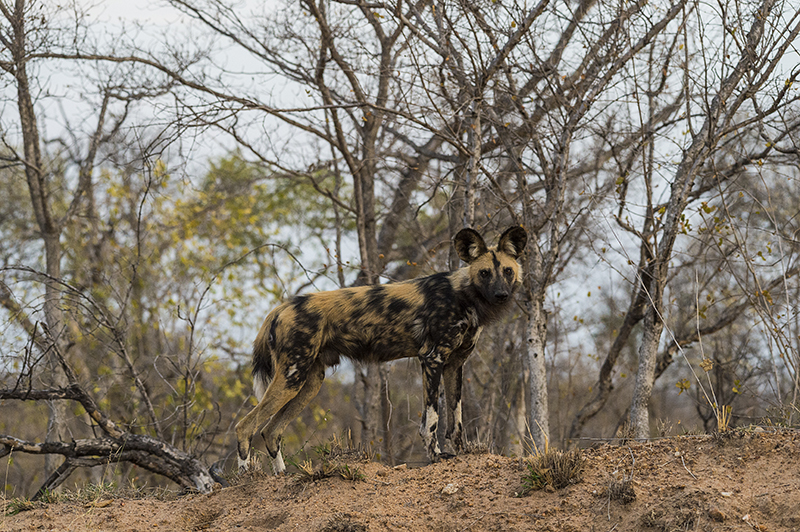 We also find ourselves within spitting distance from a trio of elephants, a hydrating hippo wallowing in a waterhole, a mother rhino with her almost-grown calf and an elegant giraffe. And in another Ryan “close your eyes” surprise, we drive – eyes closed – down a track, and when he says open, we are front and centre at a waterhole crowded with buffalo and zebra milling together just like teenagers meeting up at a shopping mall on a Saturday afternoon.

When not oohing and aahing at our good fortune of being immersed in the animal kingdom that is Kruger, we are tucked away at the magnificent eco-friendly Earth Lodge, sculpted into hillocks that are quite often walked upon by elephants or lions. Even the entry to the Lodge is via a hidden curving walkway that curls down to the vast reception area, with its wonderful views out over the bushveld. 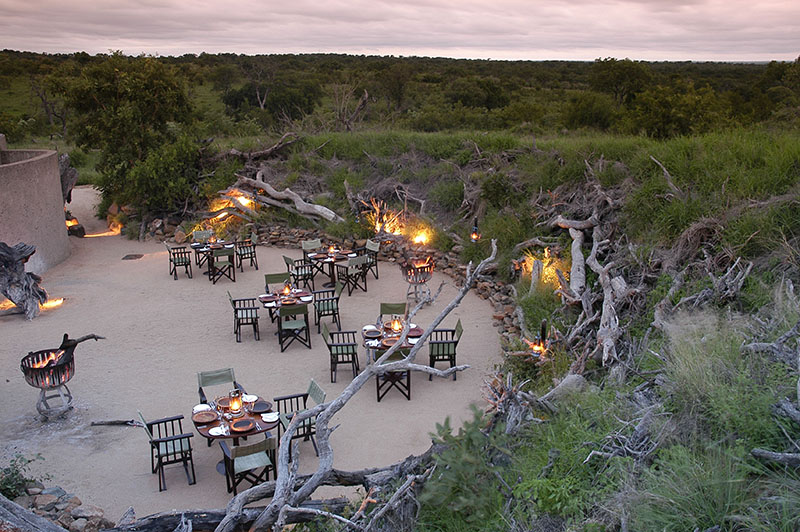 The 13 lavish suites, created with earthen walls and ceilings, boast a massive bathroom inside as well as a shower and plunge pool outside. The king-size bed has prime position and we leave all the curtains open day and night, being rewarded by opening our eyes to two grazing kudu just outside our windows in the morning.

The food at Earth Lodge is divine, from the quick pre-morning safari nibbles and piping hot tea or coffee to a full breakfast afterwards, beautiful lunches and heavenly afternoon tea to ensure sustenance for the afternoon game drives. In the evening, after we freshen up, we dine under the stars in the boma, and on one special night, in the incredible wine cellar. Afterwards, we have a drink in the bar, strolling outside on the grass to an overture of hippo snorting. Recently, a sunken fire pit has been added which would only add to the experience. 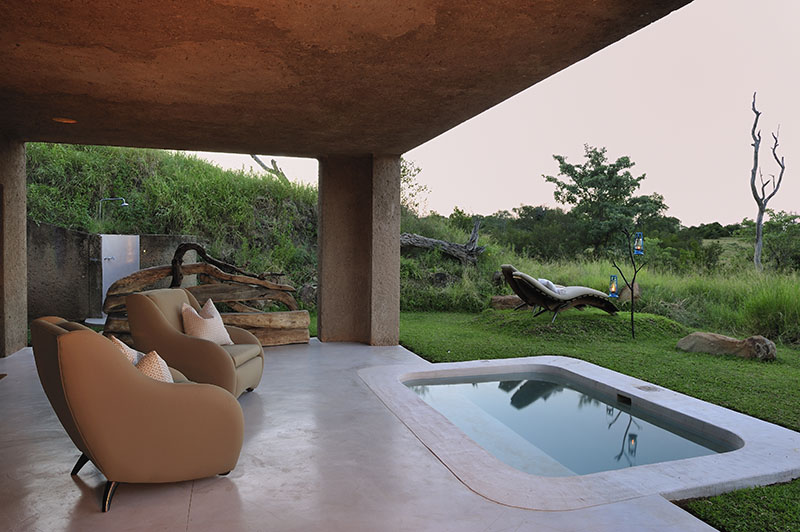 On our last day, Ryan springs another surprise, taking us on a walking safari. We obediently follow him single file, on hyper alert in case there is a lion lurking behind the next bush. We come across termite mounds, a hippo carcass picked clean and a few different animal tracks, before he sends us scampering up a rocky outcrop. At the top there is a cave, where he shows us paintings on the cave wall done 6,000 years ago by the bushmen who lived so successfully on this African soil. 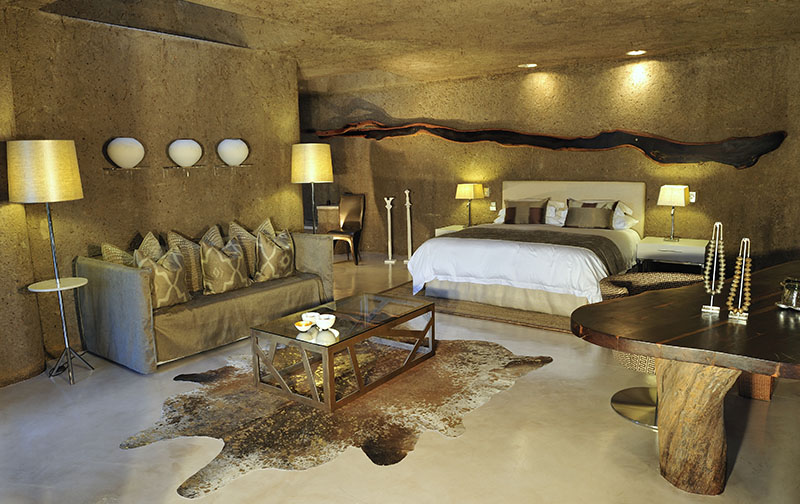 One shows a man and woman dancing by a fire, and being here, treading in their very footsteps, made me feel as if time was indeed standing still. I can almost smell the smoke of that fire, hear the rhythm of those drums. It is intoxicating. • 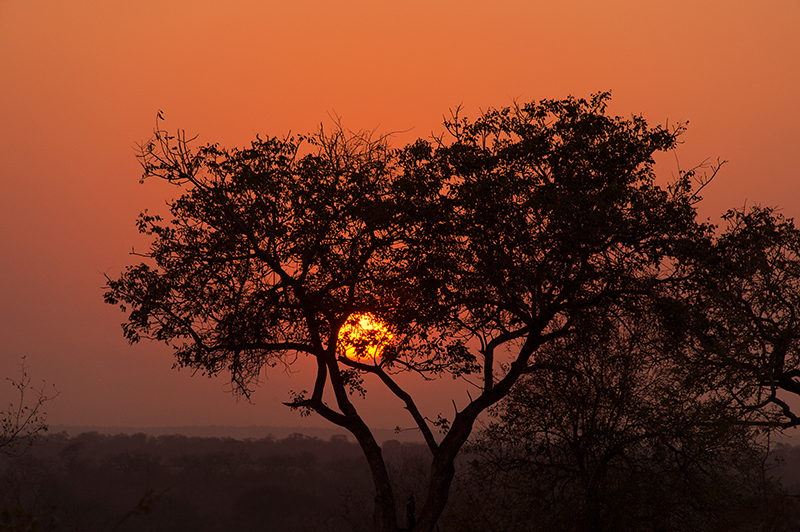 • Qantas flies from Sydney to Johannesburg with easy connections to the Skukuza Airport at Kruger National Park with South African Airways’ regional airline, Airlink. Or Federal Air has flights from Johannesburg direct to the Sabi Sabi airstrip. qantas.com; flysaa.com; fedair.com
• Earth Lodge is one of four lodges in the Reserve, with the other three being Bush Lodge – great for families, Little Bush Lodge and Selati Lodge. 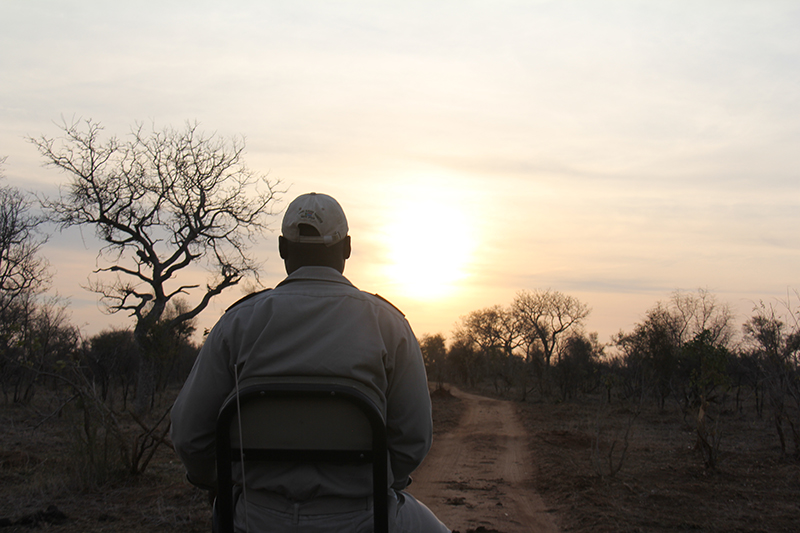