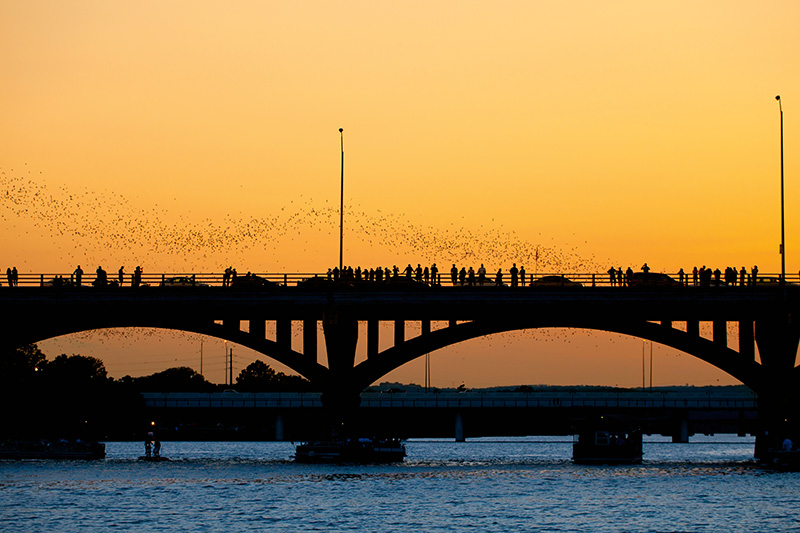 At Walsh Boat Landing in Austin, there’s not a cowboy with a ten gallon hat in sight. In fact, as the sun dapples an absurdly beautiful expanse of emerald-hued water, as crystalline as a perfect gem, I don’t see any stereotypical tumbleweeds, horses, cacti or spaghetti western folk with syrupy drawls. This is a whole other part of diverse Texas, a state that’s geographically as large as Spain or France. In this town, you’re more likely to spot a hipster on a road bike than a man on a horse. Birthplace to global businesses, such as Dell Computers and Whole Foods, idiosyncratic Austin, located at the state’s heart, exudes a vibrant university town vibe. 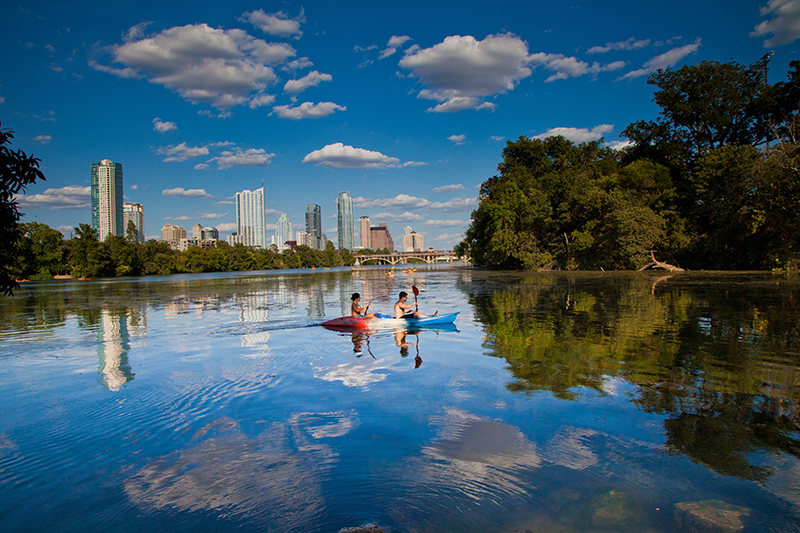 Here, on the fringe of an eclectic, upscale neighbourhood, I spy a duet of swans gliding across the lake, a pair of über-fit runners racing up a be-flowered hill, a coterie of wakeboarders loading their equipment into a sleek boat, and a woman serenely paddling atop her SUP (stand-up paddle board) gliding through the glassy water. Just minutes from the urbane hubbub of downtown, I’m waiting to board Lake Austin Spa Resort’s water taxi, a streamlined craft that will whisk me to the award-winning hideaway, 30 minutes away, On the lake’s shores, with its unabashed celebration of nature, its casual elegance, and its focus on fitness and personal transformation, the destination spa embodies the positive spirit of Austin. Day-trippers or those inclined to check in for a more result-driven stay, can occupy plush cottages with a view, eat healthy organic food, partake of a plethora of fitness classes (think: yoga or aerobics on a pontoon in the pool, kayaking or guided hikes), and opt for more than 100 treatments from the spa’s all-encompassing menu. 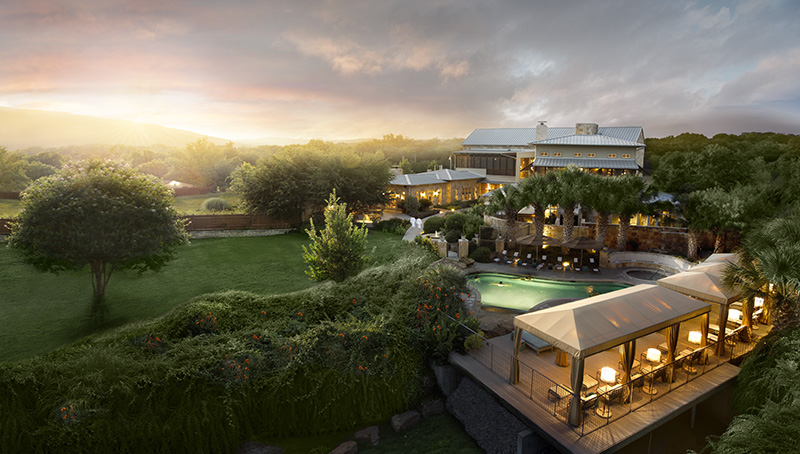 While locals won’t deny their fervour for the city’s storied music scene, Lake Austin Spa Resort is but one of a bevy of less melodious reasons to visit Austin. Though this tuneful mecca embraces several wildly popular music festivals (South-by-Southwest and Austin City Limits being the best known) and hundreds of live music venues, residents will argue that the city offers so much more than soulful voices and guitar riffs. Always a liberal bastion in a more conservative state, the city’s buzz and openness to creativity has drawn artists, free thinkers, inventors and intellectuals of all sorts. 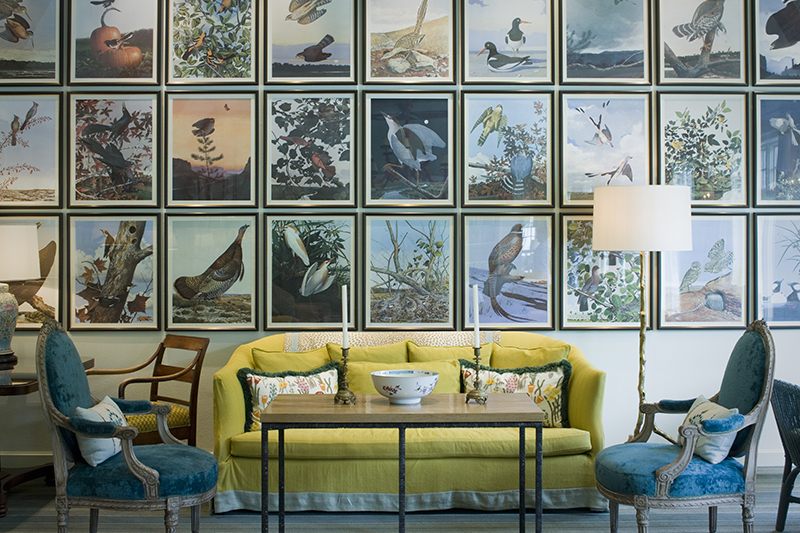 A metropolis of roughly one million people that manages to maintain a village atmosphere, the capital sits amid man-made lakes, fringed by peach orchard-rich wine country, and hills that erupt with a carpet of wildflowers in the spring. The populace ranges from hip-hoppers to hippies, hipsters to homebodies.

Convention never has been Austin’s thing. “In Austin, nothing is strange at all,” muses alto powerhouse Shelly King, a former Texas State Musician and much beloved local crooner. Perhaps that’s why the city defiantly lives up to its motto: “Keep Austin Weird”, a call to arms to anyone who wants to homogenise it. The result is a city fabric dense with texture and personality. 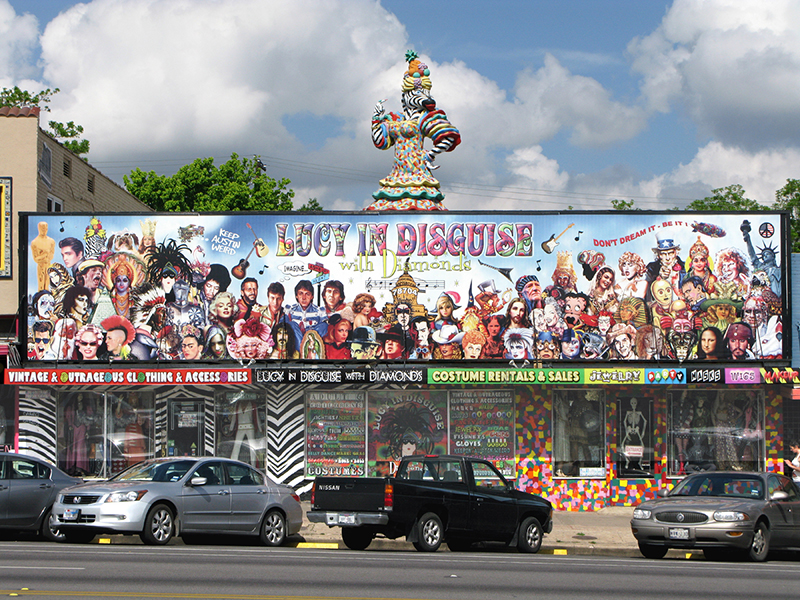 What other city can brag about a nude beach on a lake as well as a natural spring swimming pool, one-fourth of a mile long, that shelters its own endangered species – an albino, blind salamander? Add in one of the biggest urban bat colonies in the world, located beneath the Ann W. Richards Congress Avenue bridge downtown (1.5 million Mexican Free-Tailed bats emerge at dusk, October-April, in an ebony spectacle that draws throngs), a dive bar, (The Little Longhorn Saloon), where happy, live chickens join imbibers in playing the venue’s infamous “chicken s—” bingo drinking game, and a profusion of food trucks (more than 2,000 at last count) selling everything from bahn mi to barbecue. Such eccentricities create our norm. 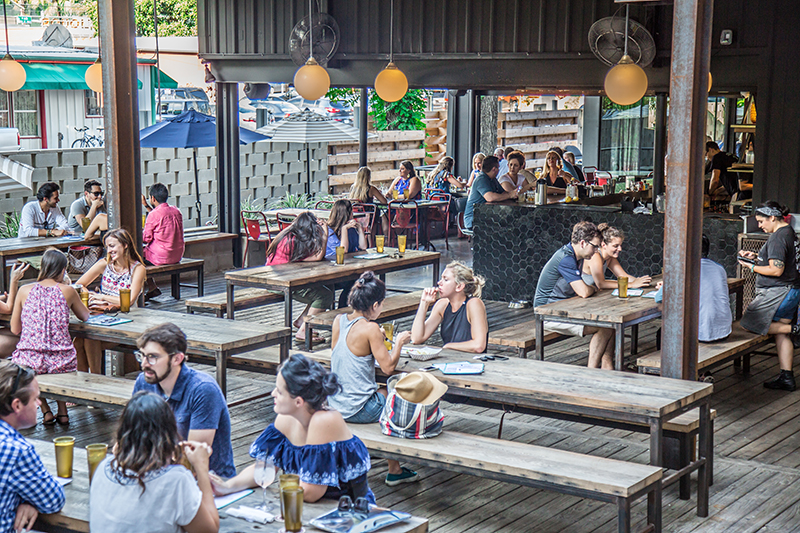 Cross the bridge downtown to SoCo (South Congress), my favourite entertainment and shopping district to experience an abundance of mom-and-pop owned-boutiques, unique restaurants, bars, galleries, and coffeehouses. Once an unsavoury flophouse sector, this portion of SoCo was reborn when a canny hotelier turned an old motel – now Hotel San Jose – into the town’s coolest hangout and out of town stay. Soon other businesses reimagined themselves around the hotel, turning the refurbished strip into a see-and-be-seen destination, the tantalising sort of spot where the stylish
kids of all ages congregate. Here, find the iconic, historic Continental Club, a boozy speakeasy that draws from deep Southern juke joint roots and hosts world-class musicians every day of the week. 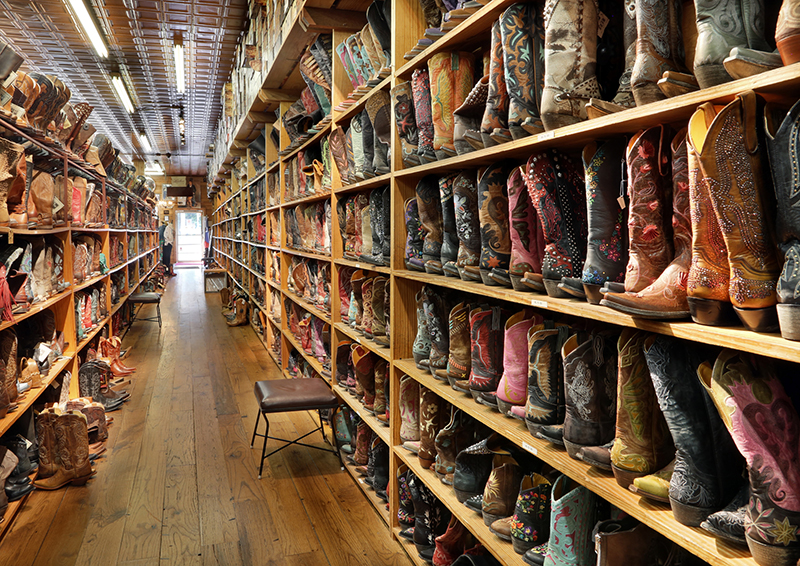 Stores like Allen’s Boots (shelves and shelves of jaw dropping cowboy boots), Lucy In Disguise With Diamonds (vintage clothes and costumes), Parts & Labour (clothing and accessories by some of Austin’s funkiest designers), Blackmail (fashion designer’s workshop with an all black theme) and Stag (a menswear shop with a James Dean-meets hipster-aesthetic) define the drag. Restaurants such as Home Slice Pizza, Gueros, and Perla’s Seafood and Oyster Bar offer plenty of places to nibble and tipple. 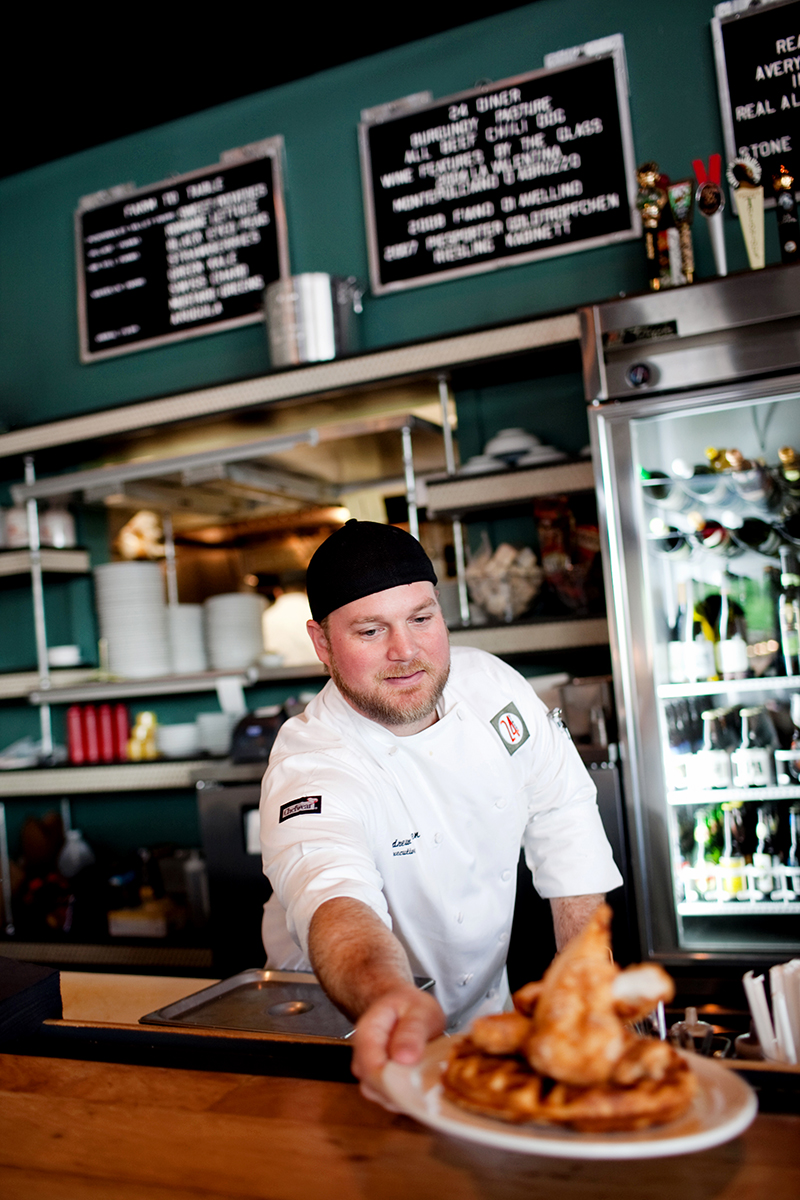 Once a month, pedestrian-friendly SoCo revs up the action with a street party. Called First Thursday, the event means stores stay open late with sales, free snacks and libations. Most restaurants, including food trucks, lure folks to stay awhile with extended happy hours or food specials. Throughout, on bare bits of sidewalk, and in parking lots, bunches of artisans set up booths to hustle their wares. It’s an inviting scene, which unveils Austin’s creative, ebullient spirit – one that makes tourists feel like insiders. 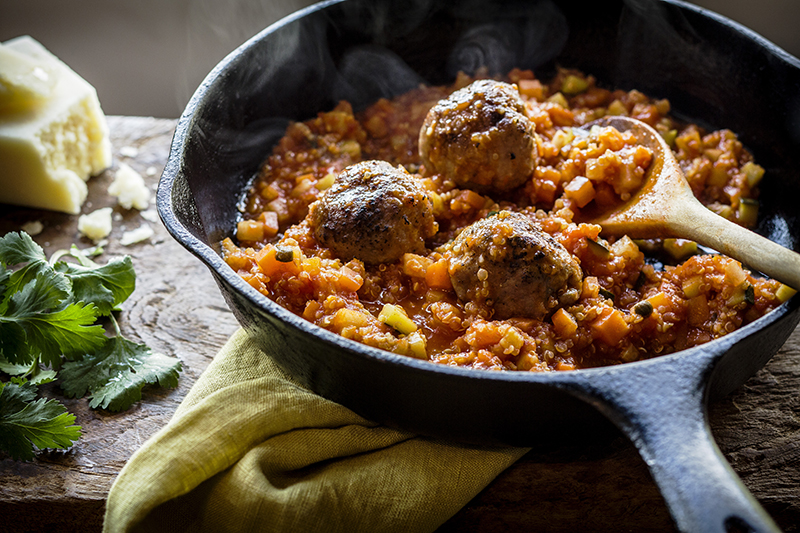 And what’s to eat? With a multitude of organic farms, foragers, family-owned food companies and farmer’s markets, the city draws from a food obsessed foundation. Alchemist-mixed cocktails, craft beer, homages to bacon, and sushi concocted from such things as blueberries and beef tongue set a voguish standard. And this liberal leaning town gobbles it all up. From Tex-Mex cafés to more highbrow James Beard winning chef-helmed-sanctums, Austin satisfies. Try trusty Fonda San Miguel (a temple of interior Mexican cuisine), Franklin Barbecue (where the long line makes a statement about the quality) or Chef Tyson Cole’s highly awarded, Japanese-inspired Uchi for dinner. Gorge on brunch at Chef Drew Curren’s 24 Diner, a gastronomic take on American classics, or indulge all day at truck-stop chic Irene’s. For libations, don’t miss the speakeasy, Garage, hidden in a parking complex. 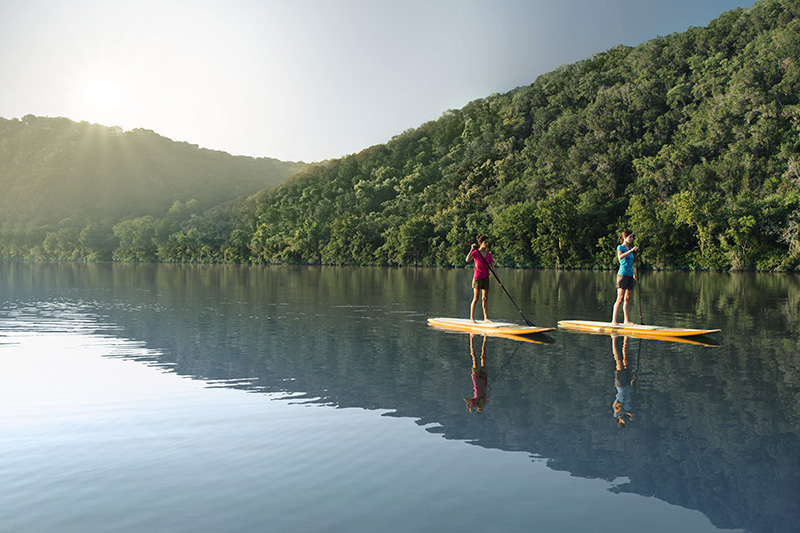 To offset the calories, Austin plays hard. Join the denizens for a swim at spring-fed, Barton Springs Pool, home to aforementioned salamander, for a run around Lake Lady Bird Lake’s hike and bike trail, on the water in kayaks or atop a SUP. For bicycle rentals and organised rides, look no further than Mellow Johnny’s, a bike shop co-owned by the infamous Lance Armstrong.

Weird translates to wonderful in Austin. Come visit, and enjoy the ride. • 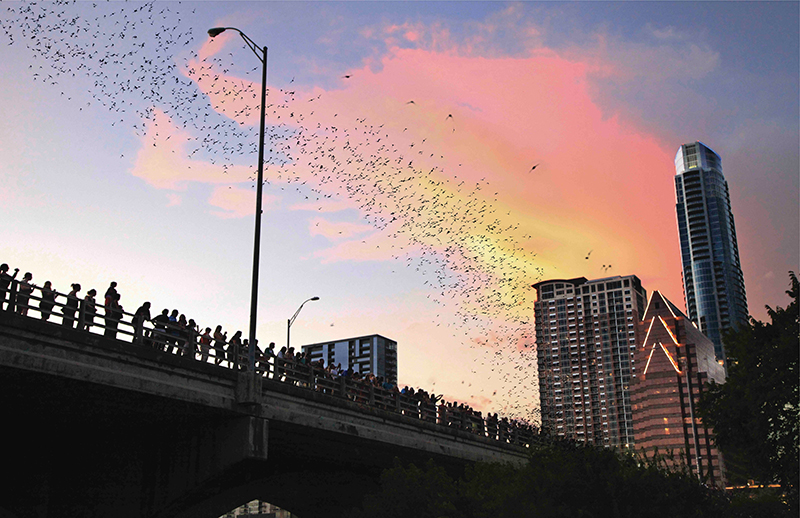 Getting around
For all Austin’s modernity, the city’s not best known for its public transport. Though many activities and entertainment districts are centrally located, they may not be walkable. Expect to use taxis, buses and rentable bikes found at stations across town.

When to go
Anytime is grand, but summer temperatures burn very hot. For cooler weather, choose autumn for the bats and spring for the wildflowers.

Where to stay
• Check into Lake Austin Spa Resort for a wellness experience. Located 30 minutes from downtown by boat or car, it showcases a less urbane Austin experience. To be right on the river, but downtown, and within sight of the bats, the posh Four Seasons Austin awaits.
• Lake Austin Spa Resort: lakeaustin.com
• Four Seasons Austin: fourseasons.com