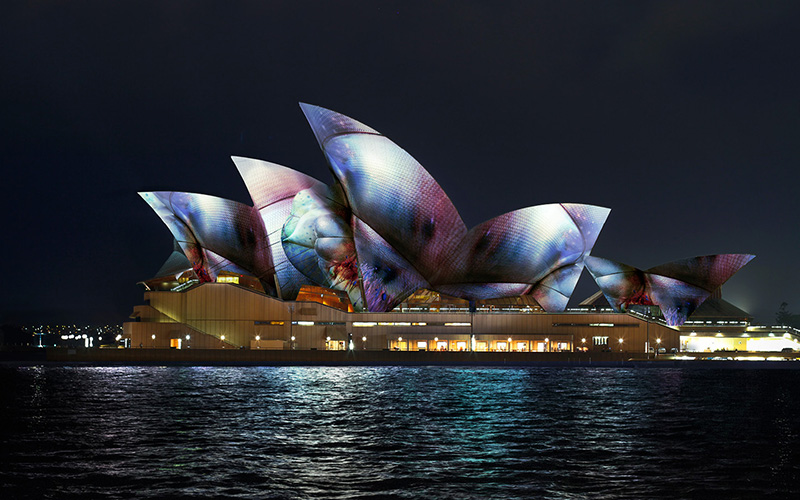 From 6pm on Friday 26 May, visionary Sydney director Ash Bolland will bring the Sydney Opera House sails to life with the stunning Audio Creatures, a spectacular animation co-curated by Sydney Opera House and Destination NSW for Vivid Sydney.

Set to a unique soundtrack by Brazilian electronic producer Amon Tobin and featuring morphing marine and plant life, Audio Creatures is Bolland’s very contemporary response to Jørn Utzon’s masterpiece of organic architecture, itself inspired by nature and brought to life by cutting-edge technology.

Ben Marshall, Curator of Vivid LIVE said: “It’s a great honour to have Audio Creatures on our sails – I’ve been a long-time admirer of Ash’s powerful imagination and his ability to realise it and actually bring it into the world with an incredible level of detail and precision,” Vivid LIVE curator Ben Marshall says.

Audio Creatures is a very different activation for the Sails this year, and is the first time the Sails will turn into a variety of different fantastical creatures that will morph into each other.

“A perfect fit for Vivid Sydney 2017, this year’s Sails are the most technically ambitious yet and seeing these stunning, living creatures brought to life within Utzon’s organic architecture will be utterly dazzling.”

This year, Vivid LIVE invites the public to experience Lighting the Sails in the most immersive way possible and delve into an infinite oceanic expanse with The Last Audio Creature in Virtual Reality.

Inspired by the secret and mysterious lives of the marine underworld, the free immersive virtual reality experience features one of the shape-shifting, magnificent creatures that will inhabit the Sydney Opera House sails.

Located on the Sydney Opera House box office level, the VR project will be experienced uniquely on three Samsung Gear VR devices within The Lounge Enabled by Samsung from 5pm each evening during Vivid Sydney.

Lighting the Sails: Audio Creatures is best viewed from the Overseas Passenger Terminal, where the full audio-visual collaboration can be experienced. A limited number of listening pods will be located at the northern end of the Lower Concourse, adjacent to the Welcome Centre, where audiences can stream Amon Tobin’s Audio Creatures soundtrack.