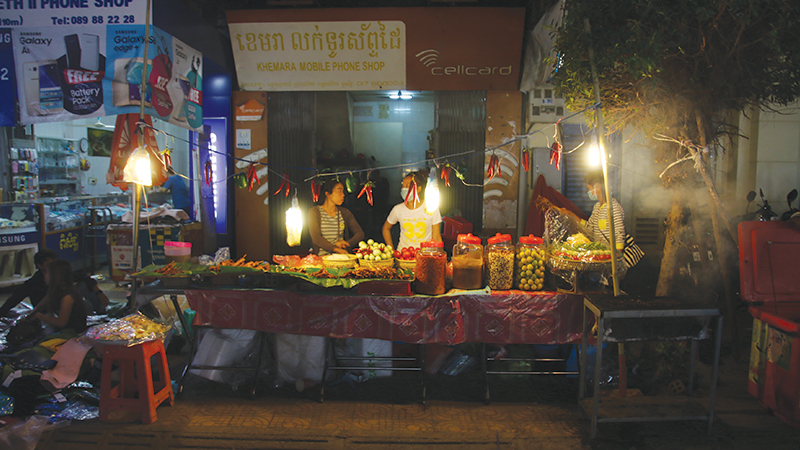 The elderly lady sitting on the footpath wears an expression mixed with amusement, fascination and disbelief.

She’s been watching us for a few minutes, as my travelling companions and I wander Battambang’s Street 2 in the golden hour before the sun sinks below the western horizon, and is following progress as we pause to admire the elegant but dishevelled structures lining the road to the busy Big Market.

She peers at us as we linger near her front door to admire bygone architectural flourishes, and snap photos of the elegant colonial-era abode, before twisting in the plastic chair to examine her home and figure out what notable detail we see that she’s been missing all these years.

To this Battambang resident her house is just like all the others lining the neat grid of roads that form the heart of Cambodia’s second-largest city, but to us these weather-beaten terraces are an elegant remnant of the time France occupied Indochina.

She talks to our Insider Journeys’ guide Chau Bun Pheng, who notes we’re Australian travellers intrigued by local history, before explaining the structure served as a school in colonial times and was abandoned when the Khmer Rouge cleared the city in 1975 then converted to accommodate urban families returning from rural exile in 1979.

While there’s more to this settlement than vintage dwellings – there’s an impressive food scene, the obligatory temples and Angkor-era ruins, art galleries, bustling markets, a unique local railway – it is architecture that’s engaging us this afternoon so Pheng customises our sunset stroll to take in the best buildings.

We visit the central market, where tiered west-facing windows form a lofty roof above the greengrocer and fishmonger stalls inside, and a merchant’s house near the Sangkae River where I peep inside an open door to see faded encaustic tiles leading to a curved staircase ascending into abandoned darkness.

Pheng says Battambang is unique in a country heavy with magnificent French-colonial architecture because the government is working to maintain the significant structures in an effort officials hope will lead to a UNESCO World Heritage listing. 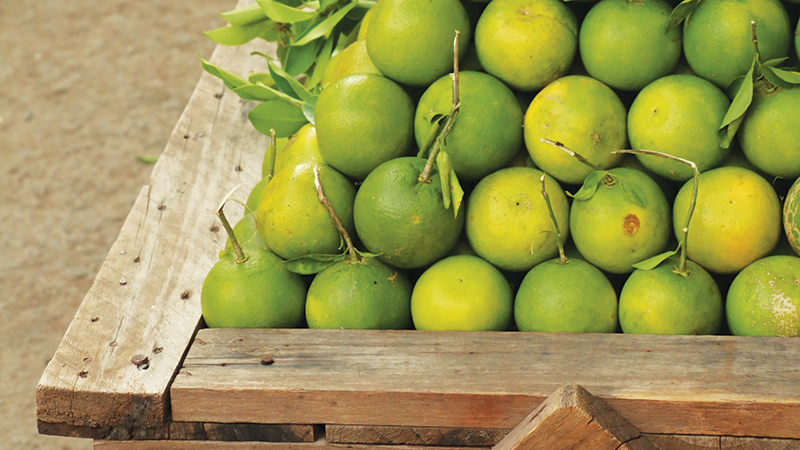 “Many locals want to replace old houses with new and modern places to live but the government refuse as they know it marks an important chapter in Cambodia’s history and gives tourists a reason to visit”, the Insider Journeys’ host says as we amble down the middle of the road past unbroken strings of weary shophouses.

“This is my favourite street in Battambang, I like Street 2.5 near the market because it doesn’t have a lot of traffic, and this block is long rows of buildings that haven’t changed much since they were built a century ago.’’

After our guided walk finishes on the riverbank, and we say goodnight to Pheng who’s off to dine with the small band of tour guides and drivers in town tonight, we backtrack to Street 2.5 and settle into oversized rattan chairs on the portico at Vintage for sunset drinks at this modest wine bar occupying one of the antique residences.

The petite French-owned bar has an extensive menu of wine imported from around the globe but I order a gin and tonic – the only drink to request at a time and place like this – while one companion settles for a Pastis with another deciding a chilled mug filled with Angkor ale is the perfect pre-dinner libation.

We don’t talk much as we watch the last colour drain from the day and lights appear in terraces across the narrow street as residents slide open heavy street-level shutters to sprawl on footpaths and enjoy the cool evening breeze now whispering along the quiet lane.

After dinner at nearby Khmer Delight – order amok, a traditional Khmer dish every chef tweaks to put their own signature on flavours – we wander into Bric-a-Brac which is a design-cum-antiques emporium also serving as an intimate boutique hotel and after-hours bar established by Australians Robert Carmack and Morrison Polkinghorne.

The creative couple has lived in Battambang for 18 months – a “sea change” taking them from inner-city Sydney to Cambodia’s north-west corner – and they show me a charming bed-and-breakfast suite on the first floor of their corner French-built residence before telling me about the charm of their adopted home.

“We chose Battambang, not Cambodia,” Robert says as Morrison fixes an after-dinner tipple in the elegant but informal footpath bar the couple open every evening.

“This is an intact colonial city which is a rare thing in Asia, we’re surrounded by century-old shophouses with gable roofs and portico frontages built by the French, and it’s a hive of creativity with locals saying there are more artists per capita living in Battambang than any other Cambodian city.

“On our first visit we were at a gallery opening and noticed an art installation overhead on Street 2.5, we thought if there were this many people of creative and artistic temperament living here then it won’t be a backwater for two city boys from Sydney.

“If you want to glimpse Cambodia as it once was – few cars, little traffic, local market life, historic colonial architecture – then this is the place, with Battambang often nominated as the place to come when you’re ‘templed out’ to relax and restore.”

Our second day has an excursion through the vast green surrounding the village-like city – rice fields dominate the region to put what looks like a sheet of green velvet on the landscape – with time to explore mountain-top temples, visit traditional Wat Kor village to admire an historic Khmer house, and ride the famous Bamboo Railway. 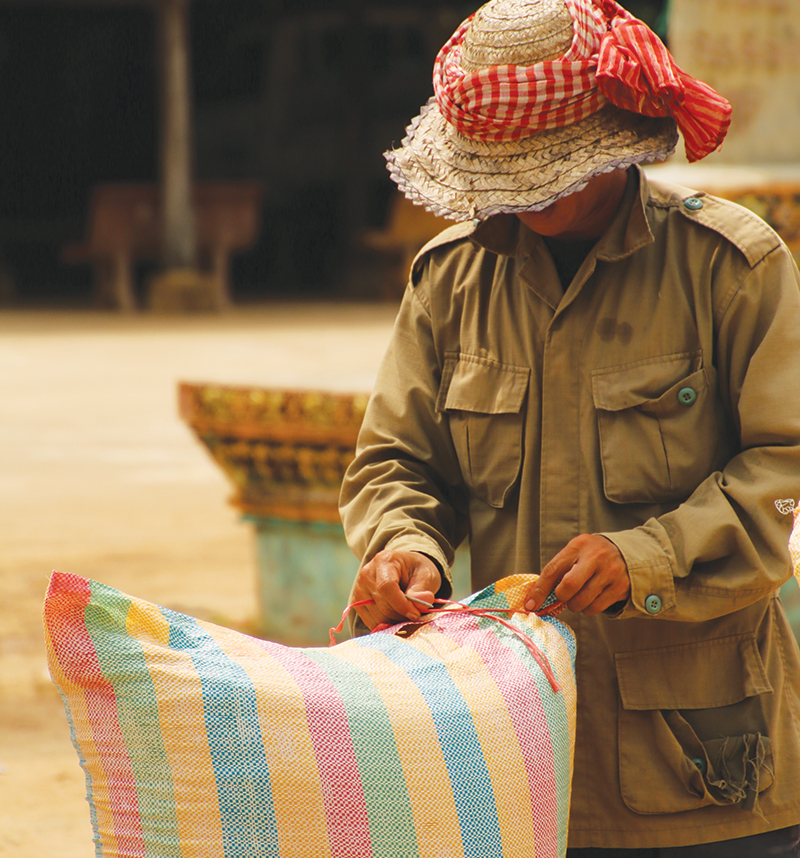 Tracks laid by the French were abandoned during the violent Khmer Rouge reign with locals quickly constructing basic nories from a steel frame, discarded tank wheels, two-stroke engine, and bamboo mat to continue carrying passengers and cargo along the line between Battambang and Poipet.

Because it’s only single track, each nori is easily dismantled when encountering oncoming traffic – there are rules about who leaves the track when two vehicles meet – and today visiting travellers can ride seven kilometres of track with it common to disembark the rustic Bamboo railway vehicle several times to let others pass during the journey.

We return to town for dinner and retire to the upstairs terrace at The Kitchen – a restaurant training young people in need of support and work experience for jobs in hospitality – and feast on dumplings, fresh spring rolls, and quenching fruit drinks while watching housebound toddlers romp raucously in the riparian park opposite.

From our elevated perch I notice there are not many western tourists in town, with only a few travellers wandering Street 1 in search of evening sustenance, and recall Robert and Morrison explaining Battambang has long been isolated from the world with poor roads making it a trial to reach.

While that’s changing – Battambang is appearing on more of those lists detailing places to see in 2016 – it’s still a distance from the tourist trail and I’m thankful to be visiting a peaceful place managing to slow the push towards progress.

And to explore a once-colonial outpost comfortable enough with its restless past to maintain the stately structures that define the era and populated by locals who smile with bemused amusement when visitors pause to photograph their dilapidated houses. •

Fly to Siem Reap with Cathay Pacific, Thai Airways or Singapore Airlines via their various hubs.

Insider Journeys
Insider Journey has several tours that include Battambang, including ‘Cambodia Revealed with Battambang,’ which visits the country’s second-largest city for a two-night stay near the end of the guided 14-day journey.
• Insider Journeys: 1300-138-755; insiderjourneys.com.au

Getting Around
Walking is the best way to get around Battambang – streets 1, 2, 2.5 and 3 form the patchwork of blocks that define the centre of town – with omnipresent motorised tuk-tuks an affordable alternative costing $USD1 per person for a short journey.

When To Go
Most people visit Cambodia from October to March but if you’re keen to dodge the crowds in neighbouring Siem Reap – and you can cope with wet-season humidity and occasional downpours making travel on unpaved roads difficult – then August and September are a better choice.