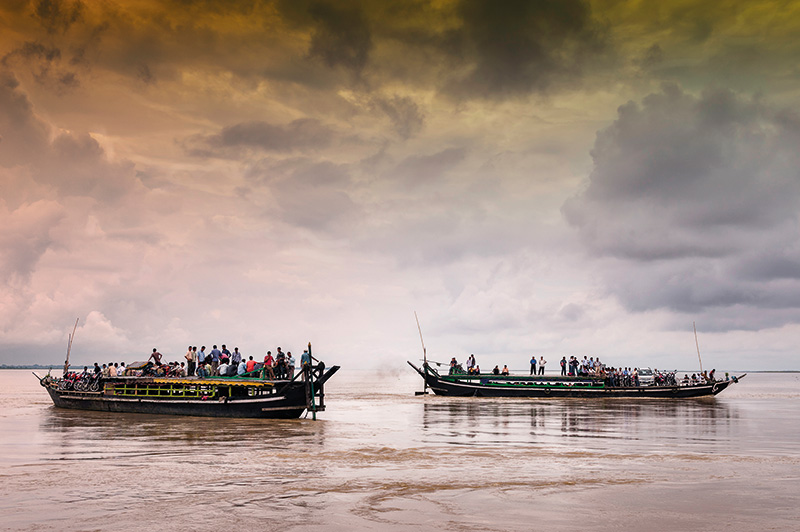 As the river gurgles past below my balcony, a spectacular lightning storm brews on the horizon. The water is so close I can almost let it flow through my fingers as I lay in bed. It is midnight and we are anchored in the middle of the Brahmaputra River in Assam, India. Half-dreaming, I re-live my first encounter with this body of water in Tibet, some 2,000 kilometres north of where we are now. Originating in the Himalayas and finally plunging into the Bay of Bengal, the Brahmaputra River courses through the length of Assam bringing with its waters all the blessings of good soil, easy irrigation and good fishing together with the perils of floods, which often decimate the area.

Assam is off the beaten track even for old India hands. The mostly rural environment of this area has contributed to the preservation of ancient sites such as Sivsagar – one of the most important temple complexes in India – and the Ahom dynasty Rang Ghar (Entertainment Pavilion), one of the oldest amphitheatres in Asia. Long gone are the fighting bulls and warring-elephants that attracted courtiers and villagers to this site but this exquisite building still stands with its beautiful roof mimicking an upside down boat. A visit to the Talatal Ghar, an intriguing Ahom Palace surrounded by myths and legends of yet undiscovered passageways, built around the same time (18th century) is part of the cruise as well. 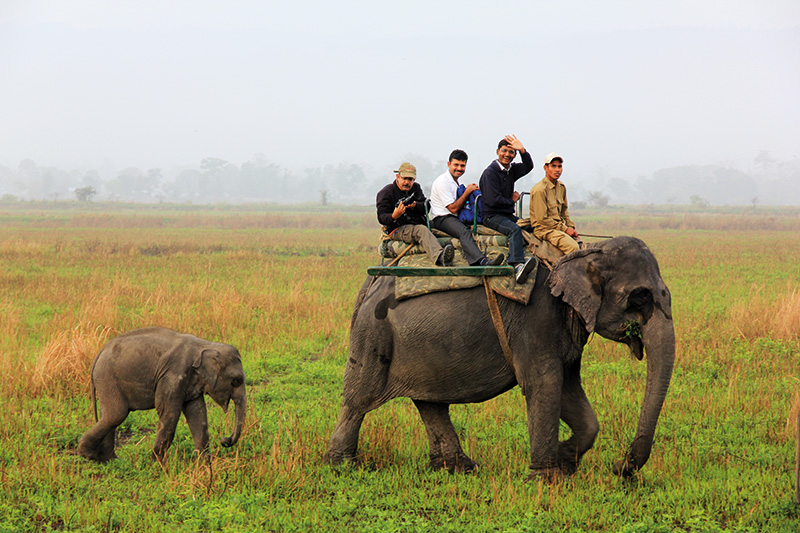 Sivsagar Temples’ stunning architecture is made more mysterious by the deepening colours of dusk. The floodlit  high domes – dedicated to three different Gods – are surrounded by swaying palms, flickering butter lamps, ascending incense swirls against a violet-blue sky. The waters of the huge man-made lake near the temples, reflect a full, orange moon rising. Coming out into the open after exploring the temples’ interiors, a crescent moon has replaced the  full moon. It takes us a few seconds to compute but yes,  this is not only a rare blood moon but a lunar eclipse as  well, taking place before our eyes.

While these rare events are not guaranteed on every  cruise, what the visitor can count on is the element of magic associated with this area. There is something about India, compelling, fascinating and riveting: a combination of its people, thousands of years of history, nature and a culture that survived waves of occupation. 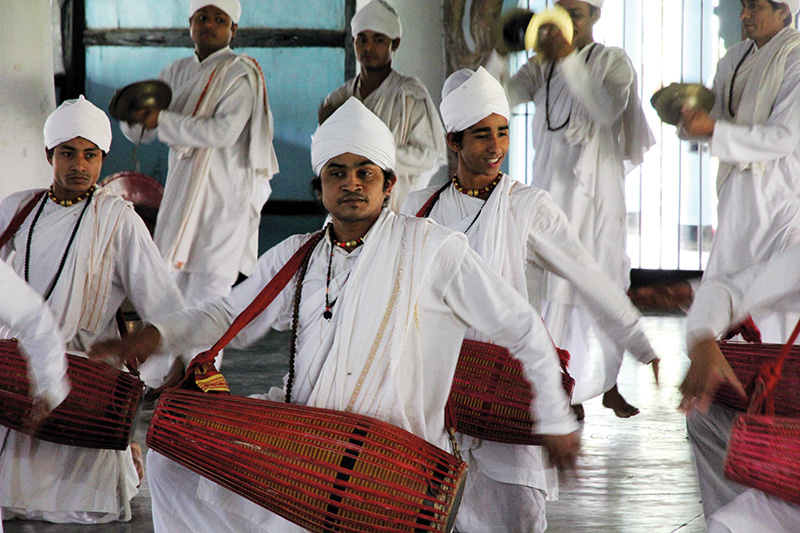 Assam is not only rich in culture and architecture but also in nature. Framing part of this abundantly rich environment, the Kaziranga National Park is for me one of the top highlights of this cruise.

We set off before dawn and are whisked away in 4×4 vehicles to the gates of Kaziranga, where one of the Lodges  is in full swing preparing Western and Indian full breakfasts including a dosa station not to be missed (Dosa masala are paper thin pancakes filled with a hearty combination of potato and spices). Just before sunrise, with dew still clinging to the tall grasses, we mount our elephants and start swishing our way into the heart of Kaziranga.

As mist rises from the ground, a fiery disk slowly pushes its edge over the horizon little by little, hazy, smoky, blood red and exhilarating. Just as the sun clears the horizon, our mahout points in the distance. On a patch of tall, dewy grass,  a mere four metres away from us, a mother and baby rhino are munching away. Their hides are spectacular and much more elaborate than those of African rhinos. They looked as if they were wearing armour, rivets, articulated plates and all. Half of the world’s existing rhinos (over 2,000 of them) are in Kaziranga sharing space with 15 other endangered species of mammals. In the space of one morning, we spot dozens of wild rhinos all around us. 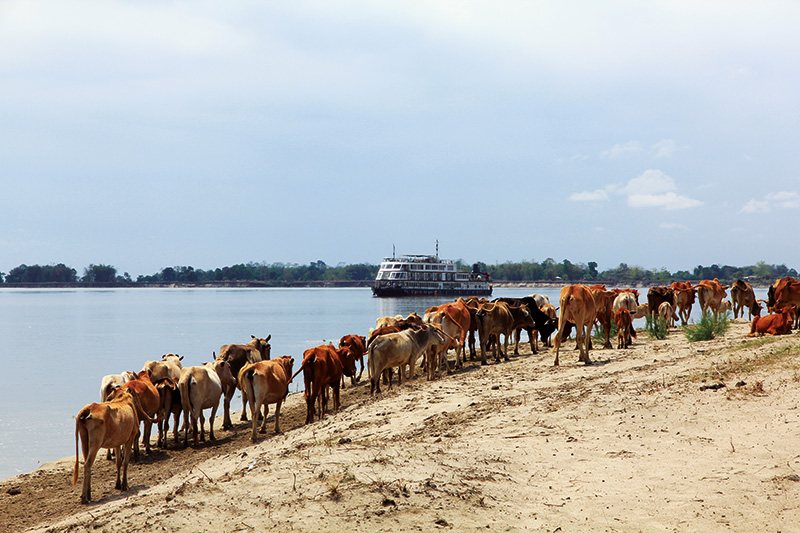 If this had not been enough, there follows a jeep safari in the afternoon, to a different location where deer, wild hogs and a great variety of birds dot the landscape. On a particularly wooded area a giant hornbill perches on a branch. As our open-top jeep approaches, the hornbill takes off and flies over our heads, so close, we can almost touch him.

Cultural highlights are aplenty on this cruise. The unique culture of Majuli Island – the biggest river island in the world where the Mishing people follow a lesser-known form of Vishnu worship – is present all around us. Here we are treated to an outdoor mini performance of the Ramayana with spectacular costumes and live music. At the Kamalabari Satra monastery, we are transported from a quiet and sedate mystical experience to a booming drum performance by the monk-ensemble that has toured the world presenting their sacred dances.

Tea is almost synonymous with Assam and no trip would be complete without a visit to a tea plantation. Strolling around the quilt-like appearance of the tea bushes at a leisurely pace, is a photographer’s dream. The colourful saris worn by the tea-pickers who, with nimble fingers carefully pinch the new buds and toss them into their baskets, punctuate the intense green of the vegetation. Lunch at the planter’s house lawns is lavish and enlivened by the owner’s friendly chat. A tea-tasting session rounds up the Assam tea experience. 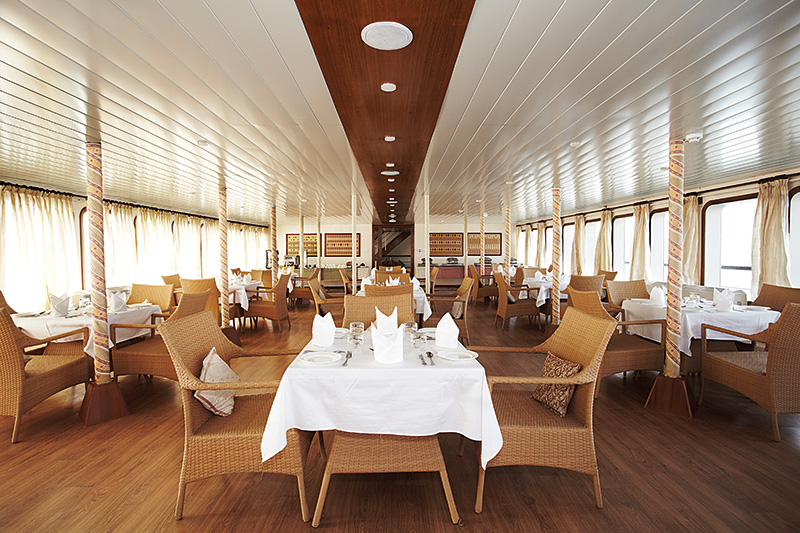 Seven days of cruising over 570 kilometres packed with discoveries doesn’t mean there is no time onboard to relax. Life on the boat is laid back and full of pleasant surprises: evening cocktails on uninhabited giant sandbars where the crew set up a nightly bar around a fire; delicious lunch and dinners in the tastefully decorated and air conditioned dining room; informative lectures by the resident Naturalist; optional early morning yoga sessions on sandbars (where our only companions are birds and the odd turtle) and cooking demonstrations fill the gaps in between outings.

The M.V. Mahabaahu has the atmosphere of a private yacht. With a maximum capacity of 40 guests it never feels crowded. The five decks, spacious spa with two Jacuzzis and a sauna,  a seven-metre long outdoor pool and top observation deck, offer plenty of room for all. Cabins are spacious, well appointed, air-conditioned and have bathrooms with powerful showers. Balconies and panoramic windows let you watch the river at close range from your bed. Wild tigers and elephants have been sighted on the riverbanks on previous cruises.

Temples to lovemaking, Ahom dynasty palaces, the biggest river island in the world, wild rhinos, hornbills, tea plantations and drumming monks all within one cruise? Yes, this is amazing, incredible India… •

Photography by Maria Visconti and iStock.

Captain’s Choice offers cruises on the Brahmaputra, with its ‘Remote North East India and Bhutan’ tour departing on 29 December 2016. The 18-day tour
includes flights from Australia, seven nights on board the M.V. Mahabaahu, the New Year’s Eve gala at the Oberoi Grand in Kolkata, a visit to Peacock Island to meet the rare Golden Langur, the Cloud Kingdom of Bhutan with visits to Punakha Dzong, and to the spectacular Taktsang Monastery.
Captain’s Choice: 1300-163-958; captainschoice.com.au
India Tourism Office: +612-9267-2466; incredibleindia.org