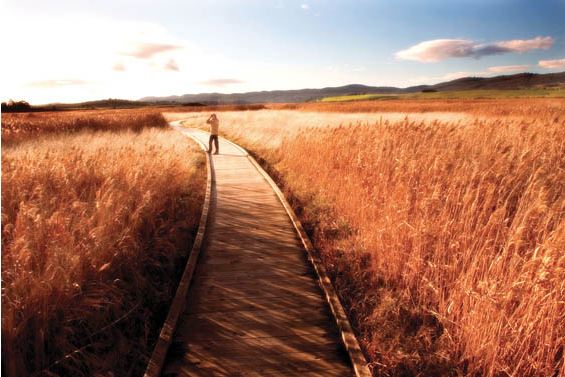 Lured by good food, dramatic wilderness and a glass or two of wine, Kris Madden visits Launceston to re-acquaint herself with the best of the Apple Isle.


The first thing I learn when I arrive for the weekend in Tasmania’s second-largest city is that I have been pronouncing its name incorrectly. “It’s not ‘LAWN-seston,’ it’s ‘LON-seston’ – or just ‘Lonny,’ ” says my guide, Michelle, in a languid Tasmanian drawl. However you say it, there’s a lot to like about this place on the banks of the Tamar River in the north of Australia’s largest island.

To me, Lonny has the feel of small English town: creaking old mills, beautifully manicured parks and gardens, cosy pubs and leafy streets lined with teashops and stores selling homemade jams and doilies. Home to around 100,000 people, it’s a “city” that’s small enough to explore on foot.

Michelle leads us on a stroll through City Park, home to an enclosure of Japanese macaques, a gift from Launceston’s sister city, Ikeda in Japan. Launceston punches way above its weight in terms of Australian history and visitor attractions. One of the best places to get a taste of the offerings is at the Queen Victoria Museum and Art Gallery, with two sites: Inveresk and Royal Park, the latter purpose-built in 1891 and currently undergoing major refurbishment. When it reopens in July 2012 it will showcase a superb collection of colonial and contemporary art from the region with a dedicated gallery space featuring local artists.

On Cameron Street, a couple of blocks back from the North Esk River, we pass the Batman Fawkner Inn, built in 1824 – the watering hole of choice for explorers John Batman and John Fawkner. Legend has it that in 1835 the two men planned their northward voyage of discovery from the pub’s wooden benches, most likely over a couple of pints of fine Tasmanian ale.

More history is uncovered at the Inveresk Precinct, on the grounds of the city’s former railway station and rail yards and an intriguing new showcase of Tasmanian art and culture. In addition to a gallery hung with works by noted colonial artists such as John Glover, the precinct also houses the Launceston Tramway Museum a fascinating glimpse into tram history.

Still on its original site in the Brisbane Street Mall is Australia’s oldest bookshop, A.W. Birchall & Sons (now calling itself Birchalls), founded in 1844. We peruse the shelves here before stopping for a coffee at Pierre’s Brasserie and Café, another Tasmanian institution that opened in 1956, which claims to have one of the first espresso machines in the country, installed at a time when skinny soy lattes were but a twinkle in the barista’s eye. 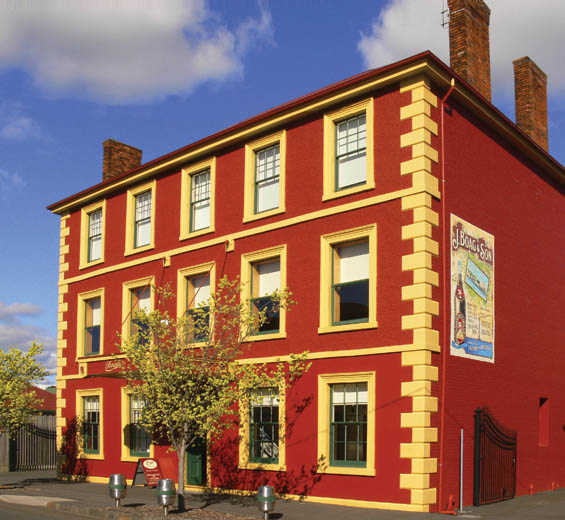 It’s a pleasant 15-minute walk along the boardwalk that skirts the banks of the Tamar River, passing Ritchie’s Mill, a revamped 1830s flour mill housing galleries and Stillwater restaurant – one of the city’s finest dining rooms – then suddenly, we’re in the wilderness.

Few cities can lay claim to such dramatic landscapes so close to the centre of town. The dazzling Cataract Gorge Reserve, with its steep, rugged cliffs, colourful rhododendrons, peacocks and lush fern glades, attracts rock-climbers and whitewater-rafting enthusiasts, but we settle for a gentle ride on what is believed to be the longest single-span chairlift in the world and enjoy the panoramic views across Launceston and the surrounding countryside.

All this sightseeing is thirsty work. Ask any local to name Australia’s best beer and chances are they’ll say Boag’s. It’s a different story if you ask someone from Hobart the same question; in the Tasmanian capital, drinkers are loyal to the local ale, Cascade. I’m partial to both.

We enjoy a whistle-stop tour of Launceston’s 128-year-old brewery, aptly named Boag’s Centre for Beer Lovers, and learn about the golden beverage’s history and brewing process. Needless to say, we sample a few award-winning beers at the end of our visit, whetting my appetite for our next destination: northern Tasmania’s wine country. 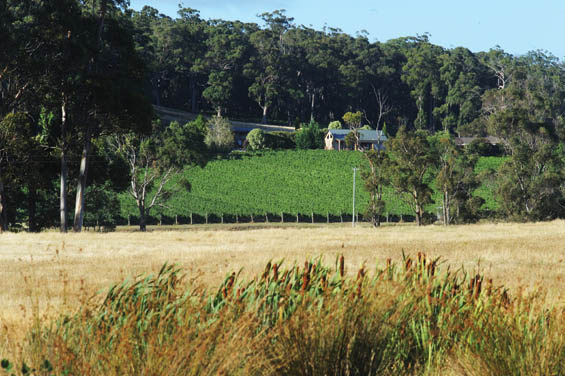 Launceston is the gateway to the cool-climate wineries of the Tamar Valley and more than 70 percent of Tasmania’s wine is produced in the region. Lovers of bubbles will be pleased to learn that this is the sparkling-wine capital of Australia.

It’s also emerging as one of the most interesting food and wine destinations in the country; an increasing number of top Australian chefs and gourmands are discovering the rich organic bounty of the region and have left the mainland behind on a quest for extraordinary dishes made from the freshest local produce. There are also plenty of roadside stalls, farms and gourmet stores at which you can stock up on irresistible goodies that range from cheeses and yoghurt to jams and chutney.

We stop for lunch at Moores Hill Estate, a boutique operation run by Julian and Fiona Weller who left the corporate world in search of a “tree change.” Their beautiful winery is set on a northeast-facing hillside near the sleepy town of Exeter, about 24 kilometres northwest of Launceston. The vineyard turns out small batches of high-quality wines, including a delightful pinot noir and a fine chardonnay.

Some of the Weller’s grapes are ripe for the picking when we visit and Julian is constantly excusing himself to run outside and check his vines while we sit back and enjoy the fruits of his labour. A delightful, crisp riesling with fresh floral aromas and citrusy notes demonstrates just how good Tasmanian wine can be. Julian insists that the local sauvignon blancs give those produced in New Zealand a run for their money: the 2007 Tamar Ridge Sauvignon Blanc was recently judged the best in its category at the Decanter Awards in London. 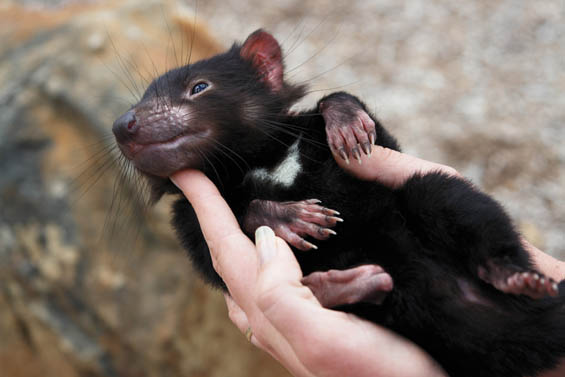 I move on to a flute of sparkling white while Julian tells me how in 1986 French champagne house Louis Roederer helped establish what became the Jansz vineyard at nearby Pipers Brook. Jansz is the label that coined the cheeky term “Méthode Tasmanoise” to describe its own antipodean style of making bubbly.

Relaxed by good food and fine wine – the Wellers serve us cheese and antipasto platters among other treats – we manage to while away the best part of an afternoon here before checking in to the Country Club Tasmania, our accommodation for the night. The property has everything you’d expect a good country club to have: an 18-hole championship golf course, tennis courts, a casino and, best of all, an award-winning restaurant.

Terrace Restaurant is, arguably, the finest dining room in Tasmania and it boasts one of the most impressive wine lists I’ve ever laid eyes on. We’re given a tour of the custom-designed, 2,400-bottle-strong Tasmanian blackwood wine room before being handed a menu listing seasonal Australian and European-influenced dishes featuring locally sourced ingredients. Highlights include organic pork with a caramelised walnut crumble and green-lip abalone with scallop, shitake mushrooms and a lobster vinaigrette.

Next morning, we explore the neighbouring historic villages of Evandale and Longford, with their grand old farms and mansions, before heading to Narawntapu (formerly Asbestos Range) National Park, dubbed “the Serengeti of Tasmania” and less than an hour’s drive from Launceston.

Around 20 percent of Tasmania’s land area is designated national park or wilderness area. Narawntapu, which consists primarily of open grasslands, is home to wombats, kangaroos, pademelons and many other small mammals as well as numerous species of birds, bats, frogs and reptiles. If we’re lucky, we may even catch a glimpse of a Tasmanian devil.

Nearby, Tamar Island Wetlands is the perfect place to indulge in a spot of afternoon “twitching.” We grab our binoculars and, from purpose-built hides, watch swamp harriers and black swans emerge, while keeping an eye on the sky for the odd white-breasted sea eagle.

Back in town, we have time to reflect on the remarkable diversity of the region. World-class hotels, sublime wines and fine fare amid a setting straight out of a watercolour painting… it’s difficult to resist the allure of Lonny. •

Getting there:
Qantas and Jetstar operate direct flights from Sydney, Brisbane and Melbourne to Launceston.
• Qantas: 131-313; qantas.com.au
• Jetstar: 131-538; jetstar.com.au

The Spirit of Tasmania sails daily from Melbourne to Devonport, a little over an hour’s drive from Launceston along the Bass Highway. 61-3/9206-6220; spiritoftasmania.com.au

Country Club Tasmania comes with smart rooms, a golf course and one of the best restaurants in Tasmania. 1800-030-211; countryclubtasmania.com.au

Further information:
Tourism Tasmania provides a wealth of knowledge when it comes to things to do and see in Launceston.  1300-827-743; discovertasmania.com