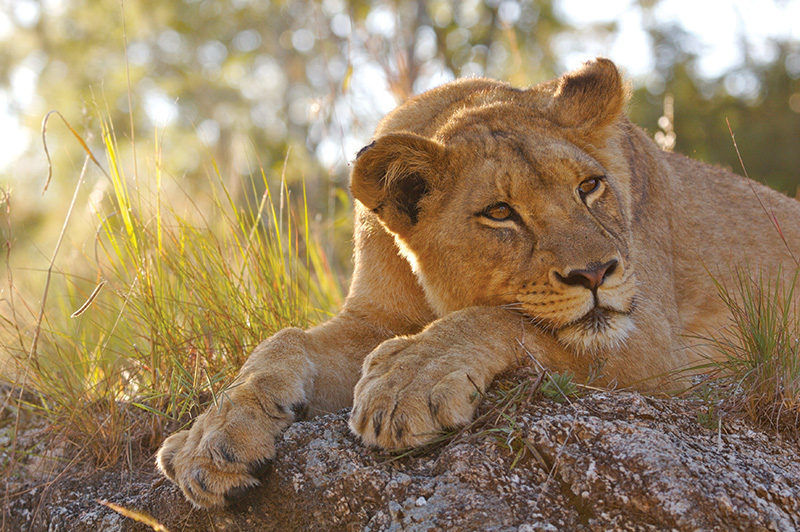 Pinch me please. There is a big, handsome male leopard about 20 feet away, basking on the rocks of a dry riverbed. It’s my first visit to South Africa with Latitude 33, I’m on my first game drive and, like the other occupants of the dusty Land Rover – including the ranger and tracker – I am enthralled. We sit quietly for maybe half an hour, photographing the magnificent animal, observing his movements and absorbing the ranger’s informative commentary about the leopard’s habits, habitats and extraordinary strength.

Exhilarated, we return to our luxury lodgings at Kirkman’s Kamp, discussing other amazing wildlife sightings from the afternoon’s drive: three old male Cape buffalos hanging out together, cut loose from their herd; a group of rhinos gathering at a tiny, depleted waterhole; hippos and crocodiles sharing a muddy pond; stately kudu antelopes and dozens of impala springing through the bush; warthogs and their cute little “piglets” searching for food; and enough exotic birds to keep a dedicated twitcher happy for weeks.

My South African journey with Latitude 33 started with a night at Johannesburg’s elegant Four Seasons The Westcliff. I was travelling with a group of 30 Australians, some of whom are seasoned safari aficionados who return to the country again and again. We became better acquainted over dinner and free-flowing wines at Wombles, a colonial-style steakhouse that is, deservedly, something of a local institution.

Well-fed and well-rested, we were whisked off the following morning to a private terminal at Tambo Airport, where we boarded three chartered Hawker Beechcraft jets for the hour’s flight to Skukuza, the charming little bush airport that serves Kruger National Park. There are no time-wasting queues to check in or drop luggage – all those tedious details are looked after by the tour company, Latitude 33.

The quality of experiences and luxury accommodation with Latitude 33 are next to none. Kirkman’s Kamp is one of several lodges within the independently owned Sabi Sands Game Reserve, which itself now forms part of the Kruger National Park – a vast wildlife haven that is the size of Wales. The lodge is named after Harry Kirkman, a well-known ranger who worked at Kruger between 1933 and 1958. The 1920s homestead has been beautifully restored by the &Beyond group – sepia photographs of grand safaris decorate the walls of the spacious living room and bar and everywhere you look there are hunting trophies and intriguing mementos of bygone days.

Supremely cossetted as we are – suites overlooking the river valley are elegantly appointed, service and dining are first-class – we are in the middle of the African bush. Vervet monkeys play in the big tree at the front of the homestead, a pair of cheeky southern yellow hornbills knocked at my door very early in the morning and one evening a hyena trotted past the veranda where we were enjoying a nightcap – he was ushered off the lawn by a staff member flashing a high-powered strobe torch. That’s one reason why you are escorted to and from your suite after dark.

An action-packed couple of days at Phinda Mountain Lodge offered the opportunity to explore more of South Africa’s vast and varied interior. Phinda is another super-stylish &Beyond property, set on 14,000 hectares in the dramatic KwaZulu-Natal region. While Kirkman’s evokes the colonial era, Phinda Mountain Lodge is designer-bush – its spacious, light-filled suites are decorated with contemporary African artefacts, you have an outdoor shower and plunge pool on your deck and the airy dining room has wide-ranging views over the plains and mountains. 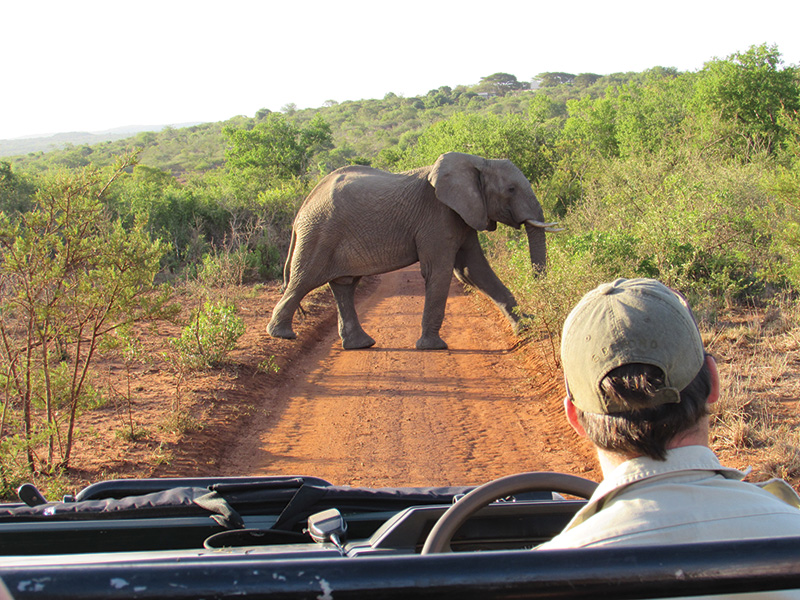 The reserve is renowned for its cheetah sightings. However, the encounter we witnessed was described as extraordinary by our ranger and tracker, even after their many years of experience. A group of giraffes staring into the distance, tails swishing, alerted Ben and Bongani to the presence of a predator – and sure enough, a female cheetah and her cubs were resting close by, almost hidden by the dry scrub. A little later, while following a large male elephant, we came across the same group of cheetahs – this time joined by a pair of young males. There was a tussle between the two groups over possession of a recently caught wildebeest (so fresh it was still pulsating); again, we were incredibly close to the action.

Suddenly the blood-smeared males took off, running right past our vehicle as three lions streaked across the grassy plain to wrest the carcass from the cheetah family. The three young lions played tug of war with the catch while the cheetahs beat a hasty retreat. A herd of zebra was watching from a sensible distance – like us, completely mesmerised by the unfolding scenario.

Wildlife encounters of the aquatic kind were the order of the day at Sodwana Bay, a stunning coastal national park about 90 minutes’ drive north-east of Phinda. We had hoped to snorkel with whale sharks, the world’s biggest fish, but they proved to be elusive that morning. Instead, swimming with a pod of playful dolphins was the highlight of our ocean adventure – yet another first for me. 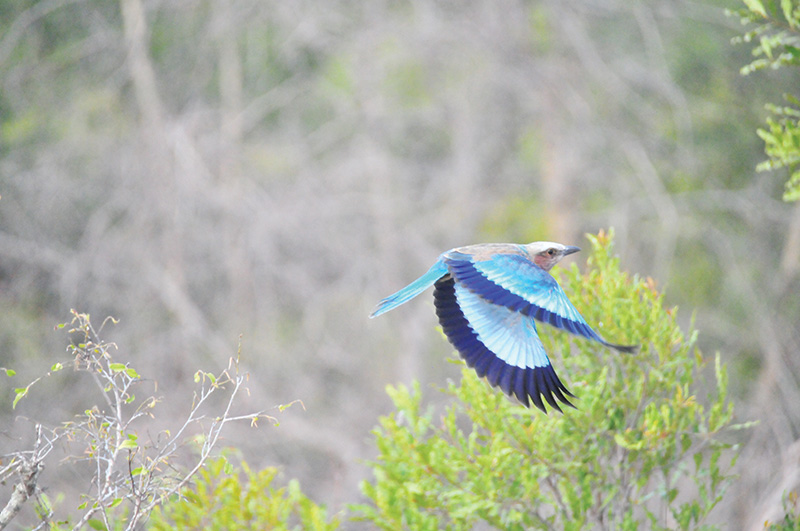 Back at Phinda, a late-afternoon game drive unveiled yet more living treasures. A lioness stretched and posed for photos while her male partner snoozed nearby. Giant eagle owls stared down at us from a jackalberry tree. As the sun slipped down, we parked at a spot above a picture-book waterhole. An enormous crocodile slithered across the sand to join its mates, and several snorting hippos, in the water. Meanwhile, an elephant ambled along the shore looking for a place to spray water over himself, and not far away two rhinos were drinking deeply. Dozens of graceful impala crowded yet another spot at the water’s edge.

As twilight descended we returned to the lodge, stopping to inspect a den of hyenas that was almost hidden in the dark-red scrub; one curious cub ventured close enough to sniff the wheels of our vehicle. Then Bongani – the man with bionic eyes – spotted a tiny chameleon. In a tree, some distance from the track, in the dark. Would these wonders ever cease?

Our five full safari days with Latitude 33 concluded with a fabulous surprise breakfast near Kirkman’s, on our last game drive. Tables with white linen cloths and all the trappings had been set up under an ancient fig tree and every imaginable dish was served – a much enjoyed farewell gesture before we flew off (in another chartered jet – of course!) to enjoy three days of the high life in Cape Town.

South Africa’s most populous city is a vibrant mix of coastal playground, breath-taking scenery, sprawling townships and a complex, multi-cultural history. Its most famous landmark, Table Mountain, was wreathed in freezing mist when we disembarked the cable car but the skies cleared enough to show off panoramic views of one of the world’s most beautiful harbours. 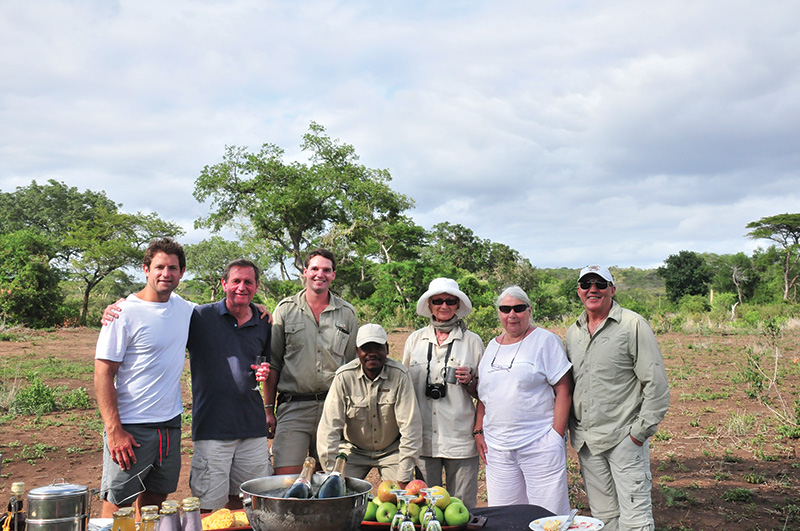 An hour’s drive from Table Mountain took us to Franschhoek Valley in the Western Cape’s lush, mountainous wine country, where we were welcomed to the Grande Provence Heritage Wine Estate for a wine-and-food pairing session followed by an unbelievably lavish lunch. The gardens on the 300-year-old estate are dotted with contemporary sculptural pieces and its art gallery showcases the work of some of South Africa’s best artists.
Talking of art, the Watershed market in Cape Town’s V&A Waterfront area – just down the road from our accommodation at the renowned One&Only hotel – is home to a wealth of boutique shops selling fashions, homewares, arts and crafts.

Shopping, lunching and sightseeing aside, a visit to Cape Town’s Robben Island reveals a very different aspect to the city. Taking a tour of the formidable prison with former political prisoner “Sparks”, who spent seven years incarcerated there – along with Nelson Mandela, who was imprisoned for a total of 27 years – was sobering, moving and ultimately inspiring. As inspiring, indeed, as everything else I encountered on this memorable introduction to the Beloved Country. •