The launch of a Royal Princess is big enough news to attract the newest royal princess, Her Royal Highness, the Duchess of Cambridge. But it’s not just royalty who receive the royal treatment.

The promise of rare wines and gourmet dining can tempt me to go anywhere in the world. Add in visits to some of the world’s greatest cities and luxuriating in plush surroundings and there is no doubt that I will sign up for that vacation. Which is how I found myself sailing the Mediterranean on the Royal Princess.

The Royal Princess is the newest ship from Princess Cruise Lines – the first in five years. So when she set sail in 2013, it was a newsworthy celebration, but not just because of the many cruise-industry firsts that are available onboard. Launching a bottle of champagne against the bow of the Royal Princess during the June 13 christening was none other than Her Royal Highness The Duchess of Cambridge.

It was while I was sitting in a Super Tuscan Wine Tasting event during a day at sea that I realised how true this was. In the intimate atmosphere of Sabatini’s, Princess’ Tuscan-inspired specialty restaurant, a small group had gathered to sample rare wines from Tuscany. The Royal Princess has the largest collection of Super Tuscan wines at sea – wines known for their bold, rich Italian flavours with a hefty price tag to match. 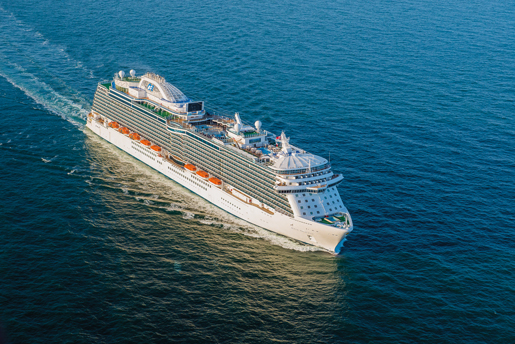 Winemaker Lamberto Frescobaldi was the guest speaker at our tasting. He regaled us with tales of how each of the five red wines from Marchesi de’ Frescobaldi that were placed in front of us were produced. Frescobaldi explained the need to ration bottles of Ornellaia among his family because the vintage was so rare and expensive. Then, to my surprise, the wine attendant uncorked a bottle of Ornellaia for our tasting. Nowhere else can you enjoy a sampling of this famed wine without spending hundreds of dollars to buy the whole bottle. It is just one of the many luxuries discovered every day while sailing onboard the Royal Princess.

The 3560 passenger ship merges the traditional favorites of Princess’ cruise fleet with modern enhancements to seamlessly create a destination at sea that seems to have everything you want and need. No matter where she sails, the Royal Princess is as much a star of the show as the ports that she visits. As I sailed from Venice, Italy to Istanbul, Turkey, I secretly wished for a couple more sea days so that I could thoroughly enjoy all of the amenities onboard the new ship.

Had my wish been granted, I would have easily spent several more afternoons in the serene, adults-only space known as The Sanctuary. Situated on the front of the ship, the melodic hum of ocean breezes is all that I could hear while sunbathing on plush lounge chairs. The staff, known as Serenity Stewards, quietly walk amongst guests offering healthy snacks and personal music players to enhance your time while relaxing in the retreat.

Located inside The Sanctuary, the Lotus Spa Cabanas are a destination for serious pampering. Private cabanas are among the new features at the Royal Princess’ Retreat Pool and in The Sanctuary.  The cabanas offer unique amenities for those who have reserved the spaces, but for the ultimate indulgence the two spa cabanas with windows overlooking the water have complete privacy and are where couples can indulge in side-by-side massages. 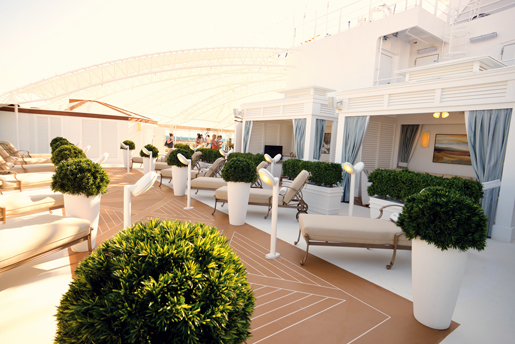 I signed up for a couples massage with my husband and we were shown into the living area of a Lotus Spa cabana. We sat on plush couches surrounding a widescreen TV and were handed a variety of menus including massage styles, a music playlist, and spa cuisine. Following our massage, we would have room service in our cabana and private time to either eat, watch TV or simply continue to relax.

With the customised elements of our spa services chosen, we fell asleep listening to the ocean waves below as our masseuses eliminated all of the tension in our muscles. Much too soon, the massage was over, but the disappointment was erased with trays of healthy entrees and fruit juice cocktails to enjoy while we transitioned back to reality.

Peace and tranquility can be found throughout the Royal Princess for those who seek it, but there is plenty of action for those who want a more active cruise, regardless of what your sense of adventure might be. There are more group activities and sporting events planned than you could possibly fit into your schedule each day. I watched dance classes with hundreds of guests swaying to music in the Piazza, the art-filled soaring atrium which is the social hub of the Royal Princess both day and night.

For less active but still intriguing activities, I peeked into Princess Live!, the cruise line’s first television studio, to watch TV programming being taped in front of a studio audience of cruise passengers. Back in my room, I could watch the shows with my on-demand entertainment system and recognise fellow passengers who I had seen at dinner or on a shore excursion.

Everyone finds their way to the SeaWalk at some point during the cruise. The glass-floor walkway curves out more than eight metres beyond the side of the ship, creating the feeling that you are walking on air above water. The dramatic view available on no other cruise ship, at 39 metres above the ocean, took my breath away for just a moment, before I started laughing with joy. I joined in with other adults on the SeaWalk and tentatively jumped up and down on the glass panels while taking photos of my feet with the ocean below.

My sense of adventure is definitely more culinary than thrill-seeking, though, so I was happy to sign up for specialty dining experiences held both day and night. Princess’ culinary programs are legendary and an amazing value, offering fine dining, wines and alcohol usually at below-cost prices. Since they are quite popular, artful planning at the beginning of the sailing is very important in order to secure reservations for the meals and tasting events that you want. 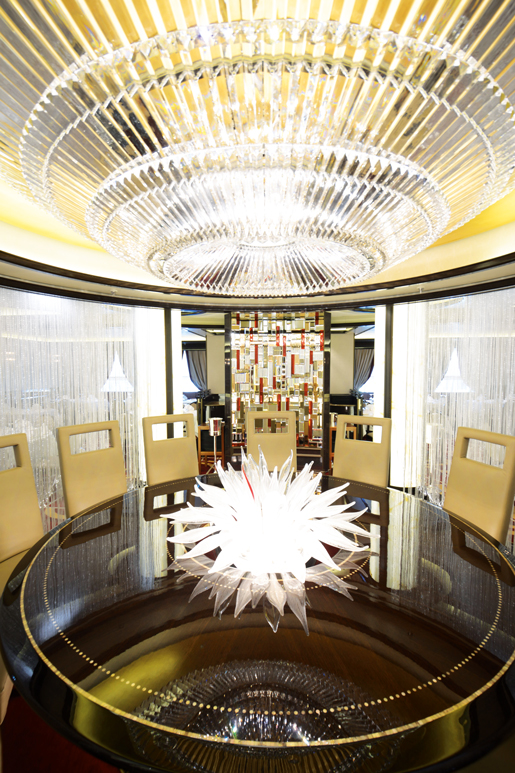 Among the most sought-after experiences onboard is a meal at the Chef’s Table Lumiere. Nowhere else at sea can you enjoy a culinary feast while surrounded by a curtain of shimmering lights that creates a private enclave in the middle of one of Royal Princess’ main dining rooms. With just 12 seats available per night, reservations are hard to come by. Sadly, I wasn’t able to dine in the exclusive setting, but I now know to book the experience as soon as possible after embarking on the ship.

Just as special, though, was the chance to savour a Wine Maker’s Dinner. In an intimate space inspired by a wine cellar, 12 guests can feast on a specialty menu developed with noted winemakers, whose wines are paired with each of the courses. Our group gathered around a circular table surrounded by glass cases filled with wine bottles. We were seated close to the kitchen, which allowed the chef to come out with each course and describe why he chose the particular menu item to accompany each wine.

Afterwards, I returned to my room for a necessary pause in between dinner and enjoying the ship’s live entertainment late into the evening. The Deluxe Balcony Stateroom offered a place to step outside, feel the salt air, and gaze at the full moon reflecting on the ocean. Though I travelled thousands of kilometres and seemingly ate my way around the world in just a few days, one of the most important luxuries that I enjoyed was having the same ocean-front room to come back home to every night.