You don’t need to travel to Maui or Kauai to experience the best surfing, food trucks and snorkelling that Hawaii has to offer; Oahu has it all. 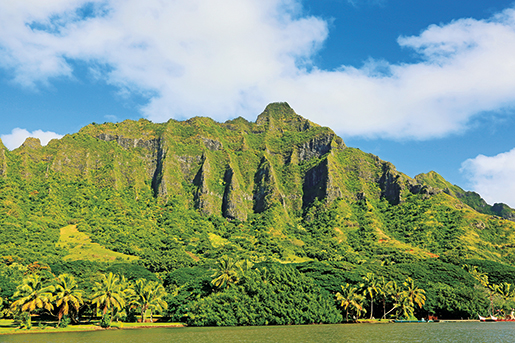 For many Australian holidaymakers, Hawaii’s Waikiki Beach is paradise. Routinely perfect beach weather, an abundance of well-priced bars and  restaurants and more shopping than you can poke a stick at (hello, Ala Moana Center) all combine to make it a pretty satisfying all-in-one package.

But for those who’d like to stray a little from the well-worn path of hotel-beach-shops, we’ve put together a day trip – almost all the way around the island, no less. Not only is it more than possible to circumnavigate virtually the whole of Oahu in one day, but you’ll have plenty of time to stop off often along the way to check out the sights and sample the local delicacies.

One tip before you set off: we’d recommend travelling on a weekday, as it’s not unusual to encounter extreme gridlock on Oahu’s main arteries during the weekend.

Travelling counter-clockwise around the island, a worthy first stop is Bailey’s Antiques and Aloha Shirts. It’s a veritable treasure trove of thousands upon thousands of vintage and new Hawaiian shirts, organised by colour, size, date of manufacture, and theme. Need a 1940s shirt with aeroplanes on it? You’ll find it here. Some of the rarer antique shirts get up into four figures, pricewise, but there are plenty of bargains to be had as well. 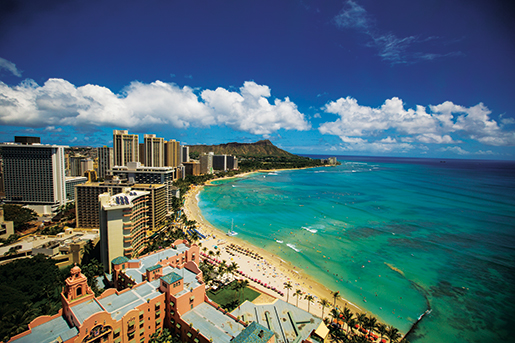 Once you’ve found yourself some snazzy gear for the trip, it’s time to hit the road. Head northwards to Hanauma Bay, a nature preserve about half an hour’s drive from Waikiki. Bring your own snorkelling equipment, or hire it from stands right on the beach. Sea turtles, scores of brightly coloured tropical fish, and living coral are all immediately discoverable for a truly magical underwater experience.

Along the Kamehameha Highway about halfway up the West Coast in the town of Laie is the Polynesian Cultural Center, a Polynesian-themed park that has simulated villages of South Pacific nations including Samoa, Fiji, Tahiti, Hawaii and more, and an evening show featuring dance, music and fire knives. It’s been renowned as the best attraction on Oahu for years, for most of the Center’s 50-year history in fact.

All that adventure’s bound to leave you in need of some sustenance – it’s time to get back in the car and find one (or more than one) of the North Shore’s famous shrimp trucks! Fresh shrimp, decadently sautéed in melted butter and garlic, and served with a soft scoop of boiled white rice, it’s just what you need to take the edge off that specific, gnawing hunger that always seems to follow ocean swimming. Shrimp Shack does the classics, and they do them very well. For $10.75 a plate, you can dive into hot, buttery, garlicky shrimp, accompanied by a $2.75 fresh fruit juice float. It may not be the poshest lunch you’ve ever eaten but it’ll probably be one of the most satisfying. 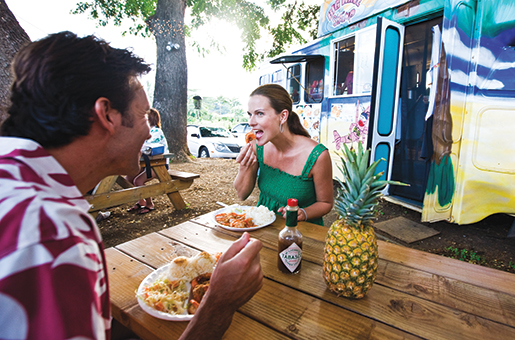 If you don’t mind queuing, drive a little further along the road and stop at Kahuku, where the shrimp farms, and most of the shrimp trucks, are located. Giovanni’s, a graffitied white monster of a truck that’s hard to miss, is the most famous of the cluster of trucks here, and rightly so. It’s been operating since 1953, so it’s safe to say they know what they’re doing.

Continue to make your way along the meandering coastline, which up in the North Western part of Oahu boasts spectacular views of the ocean – sometimes a little too spectacular, when narrow, single-lane bends start coming into play and you’re less than a metre from driving on the sand!

Golfers should take a detour to highly-rated Turtle Bay, where you’ll find two championship golf courses on the edge of the coastline. Here, try not to get distracted by the waves as you’re putting for birdie and enjoy the views of long boarders riding perfect waves (and some cocktails and local fare) at The Point Sunset and Pool Bar. 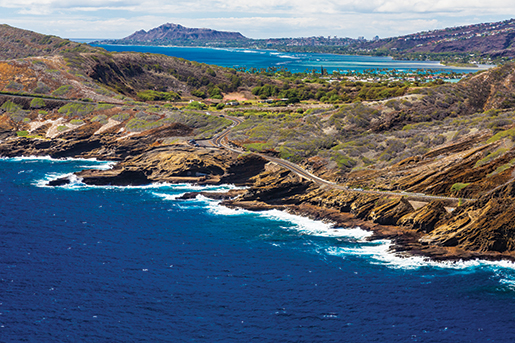 Next stop? You’re going to want to head towards the town of Haleiwa, to check out the Banzai Pipeline. The whole stretch of road from Turtle Bay to Waimea is alongside incredible surfing breaks, with names like Velzy Land (locals call it V-Land), Backdoor and Off the Wall. Then of course there is the world-famous Sunset Beach and Pipeline. The stage for countless international surfing competitions during winter, the sheer size of the Pipeline break is truly awe-inspiring – if not slightly terrifying. But if you can’t be there in November/December to watch the world’s best surfers tackle these giants, it’s worth a visit at any time of year.

A few minutes drive south from the Banzai Pipeline is the Waimea Valley, home to lush green forests, ancient Hawaiian archaeological sites, stunning botanical gardens and the Waihi waterfall, one of the grandest attractions on the island of Oahu.

Close by, there’s plenty more to do in and the around the surfing town of Haleiwa, including more world-class snorkelling at Sharks Cove. While there’s plenty of parking here, it’s also extremely popular thanks to the abundance of sea life, so you may have to wait for a spot – but it’ll be worth it. Make sure you wear reef shoes, as the rocks are sharp. You can hire snorkelling gear across the road.

If snorkelling just won’t give you the adrenaline rush you’re craving, there are a number of outfits in Haleiwa offering shark-cage dives. Our favourite is North Shore Shark Adventures, who will take you a few kilometres out to sea, where you’ll be plunged into the water inside a metal cage for around 30 minutes’ worth of quality time with these toothy creatures of the deep. But if sharks aren’t your speed, they also offer humpback whale encounters during the winter months, as well as turtle tours.

Pineapple is one of the biggest drivers of Hawaii’s agricultural industry, and a trip around Oahu just wouldn’t be complete without a stop at the Dole Plantation, which makes for a fascinating visit and is home to the world’s largest permanent botanical maze. Starting from humble beginnings as a simple fruit stand in 1950, these days the plantation takes in more than 1 million visitors annually. We highly recommend the classic pineapple whip, too: a frozen, magically creamy dessert made entirely from, you guessed it – pineapple. 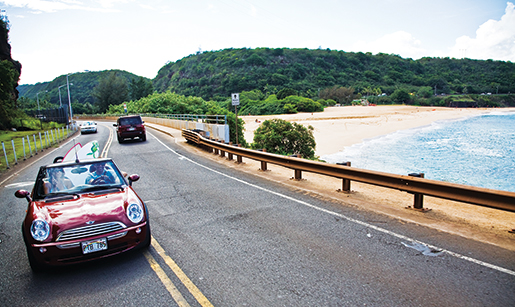 Once you’ve had your fill of ocean-gazing, pineapples and waterfalls, it’s time to drive back through the centre of Oahu back down towards Waikiki, where Waikele Outlets await. With stores including A|X Armani Exchange, Adidas, Banana Republic, Calvin Klein, Coach, Kate Spade New York, Michael Kors, Polo Ralph Lauren, Saks Fifth Avenue Off 5th, Tommy Bahama, Tommy Hilfiger, and more offering huge discounts off the US price – let alone the jacked-up Australian prices you’re likely to pay back home – this is the place to go for classic American basics, luggage and of course, the perennial tourists’ staple, running shoes.

After your shopping extravaganza, dial it down by stopping off at the Pearl Harbor Visitor Center, home to the USS Arizona Memorial, built over the hull of the battleship that sank during the Japanese attack on December 7, 1941. Here, you can also walk on the USS Missouri, the same deck the Japanese surrendered on that brought to an end World War II.

Once back in Waikiki, celebrate your day out with a cocktail at Duke’s, located right by the beach at the Outrigger, or at the Beach Bar at the Moana Surfrider, both overlooking the decadent sandy strip and the unmistakable Diamond Head in the distance.  A climb up to the crater is another popular activity in Oahu, but that will have to wait for another day. •

The best way to explore Honolulu and the island of Oahu is by renting a car and all major outfits have vehicles on offer. In recent trips, V&T has found Alamo to be the best value in terms of pricing and quality of vehicles, while Avis, Budget, Dollar, Hertz, National and Thrifty are also worth getting quotes from.  Roberts offer a great range of tours, including the Grand Circle tour around the island.
•    Alamo: alamo.com
•    Roberts: robertshawaii.com

Hawaii offers fantastic weather year-round, however, it does get warmer during the summer months of June, July and August. Ideal times to visit are April and September.