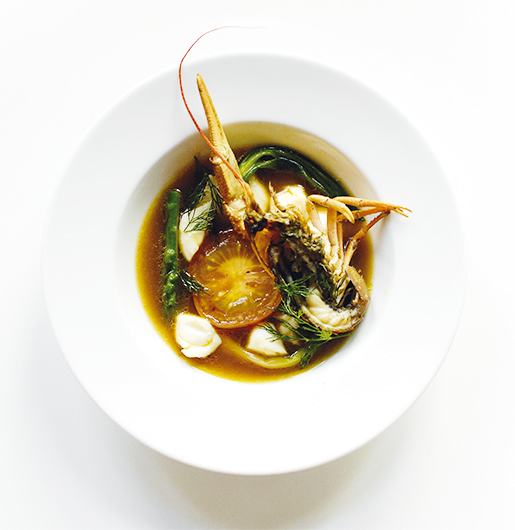 Berlin’s dining scene really took off in 2013. In this guide, our Berlin correspondent has ferreted out some of the most appetising arrivals while also giving the nod to a couple of classics.
The Innovative: La Soupe Populaire
Art and the culinary arts join in happy symbiosis at the latest outpost by bad boy turned kitchen superstar Tim Raue, who earned two Michelin stars for his aroma-intense crossover Asian cuisine. At La Soupe Populaire, Raue tests new waters by embracing the soulful goodness of German home-cooking. For the setting he’s spelunked deep within a cavernous protected 19th-century brewery. Amidst raw brick, pipes and steel, diners sit at vintage tables overlooking a gallery space, munching on dishes loosely inspired by the latest artistic offerings. A menu staple, though, is Königsberger Klopse, Raue’s riff on traditional veal meatballs. After dinner, Le Croco Bleu bar in the attached machine room beckons with extravagant cocktails amid Hansel-and-Gretel decor.
The Classic: Borchardt
Borchardt’s charm lies in its consistency, something of a luxury in these fast-paced times. Established in 1853 by a caterer to the Kaiser, the elegant brasserie is to this day Berlin’s premiere stomping ground of the rich, famous and powerful. Jagger, Clooney, Merkel and Redford are among the celebs that have tucked into dry-aged steaks and plump oysters in the marble-pillared dining hall. No dish, however, moves as fast as the Wiener Schnitzel, a wafer-thin slice of veal, breaded and fried to crisp perfection. A see-and-be-seen place like this might easily ooze pretentiousness, but thankfully the attitude is largely kept at bay. And even the lesser linen-draped tables still give you an excellent people-watching perch. 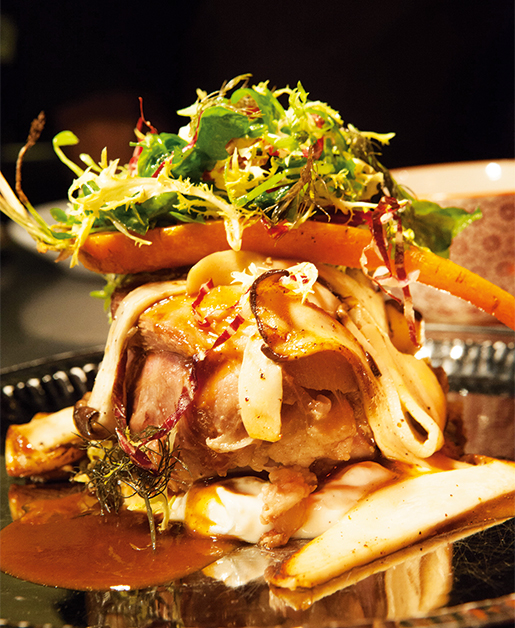 The Trendy: Mani
Hotel restaurants rarely feel quite ‘of the moment.’ Mani, however, ensconced in the eponymous hotel on trendy Torstrasse, has lassoed foodies right out of the gate. Come dinnertime, the shiny black tables in the slickly-lit dining room hum with fans of Martin Schanninger’s creative Franco-Israeli cuisine. To give palates a maximum flavor workout, we recommend putting together a family-style meal of chuzpeles (small plates). Winners delivered from the open kitchen include grilled octopus, lamb osso buco and foie gras burgers drizzled with rhubarb and tahini. A slice of Israeli cheesecake with sesame, strawberry and rosewater is a worthy coda to a fine meal. Budget gourmets should come for the weekday business lunch.
The Cool: Street Food Thursday at Markthalle IX
Every Thursday, a historic market hall in the gritty Kreuzberg district gets mobbed by hungry hipsters keen on a first-class culinary journey at economy prices. That’s when a couple of dozen amateur or semi-pro chefs set up their food stalls to serve up delicious street food from all corners of the world. It’s an exotic smorgasbord that might feature New Zealand meat pies, Taiwanese burgers, Argentine pulled pork sandwiches, Korean tacos and Vietnamese steamed pork buns. Come as a group, grab a selection and chow down at long communal tables with a glass wine or a pint of Heidenpeters, a yummy craft beer brewed right on the premises.
The Cosmopolitan: Pauly Saal
The latest ‘baby’ of top food impresarios Boris Radczun and Stephan Landwehr, Pauly Saal needed little time to become a culinary hotspot – and not much more to snag its first Michelin star in 2013. Part of the appeal is undeniably the setting in a Bauhaus-era former Jewish girls’ school where amber-hued Murano chandeliers and forest-green banquettes channel 1920s glamour. This is complemented by eye-catching art work, including a giant red rocket. Regionally hunted and gathered ingredients steer Michael Höpfl’s seasonal menu that weaves a dialogue between traditional German fare and 21st-century energy. Pike perch from the Müritz Lake District and Pomeranian entrecôte are both classics. On balmy days, sit beneath the old school yard’s leafy trees. Excellent bar to boot.
The Exotic: District Môt
Behind sun-yellow awnings awaits a quick trip to Southeast Asia at one of Berlin’s most popular 2013 newcomers. Rainbow-colored plastic stools, napkin dispensers filled with toilet paper and dangling power lines radiate the earthy integrity of a Vietnamese street food stall – minus the humidity or noisy cacophony of the real thing. The no-fuss food too goes to great length to achieve sidewalk authenticity, down to the wallet-friendly prices. Steamy pho soups reflect the simmered soulfulness of Saigon, while the DIY rice paper rolls (banh trang nuong) require a certain degree of dexterity. If you’re the adventurous type, you might like to face up to stewed eel, grilled chicken feet or a plate of deep-fried silkworms.
The Elegant: Restaurant Richard
A shooting star on Berlin’s gastro scene, Swiss-born artist and chef Hans Richard has a predilection for fine food that’s solidly rooted in the French tradition. For his first brick-and-mortar venture, he picked a restaurant space with a century-old pedigree and revamped it into an extravagant jewel fit for the pages of a design magazine. Oriental carpets meet concrete floors, bubble chandeliers dangle from a coffered ceiling and avant-garde artwork graces the walls. The arty concept transitions smoothly into such exquisitely orchestrated dishes as duck breast with caramelized sesame or trout with oyster béarnaise and parsnip. With only seven or eight choices, the monthly-changing menu is as concise as it is exquisite. 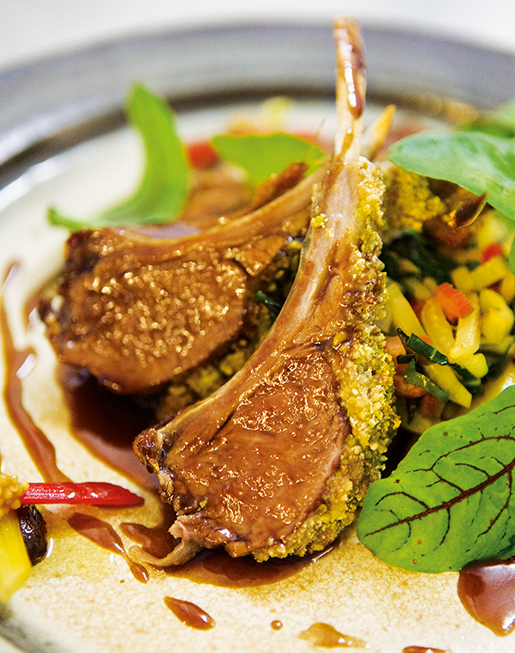 The Edgy: Sauvage
With the opening of their first Sauvage in 2011, Rodrigo and Boris Leite-Poço became trailblazers of a food trend with roots in the Early Stone Age: Paleo cuisine. Eating like cavemen means banishing dairy, grains and sugars and concentrating on organic, foraged, hunted, grass-fed and gluten-free ingredients. Dishes are hardly primitive, though, since the paleo concept is translated into modern cooking with a sophisticated touch. So successful was the original Berlin bistro that a second fancier branch opened in October 2013. A protein-packed meal might start with sesame-coated grilled octopus before moving on to a juicy Charolais steak (a perennial crowd-pleaser) or perhaps line-caught sea bass dressed in a dandelion lemon vinaigrette. The carob cake trifle makes a worthy finish.
The Venerable: KaDeWe Gourmet Floor
Pop! goes another champagne cork. It’s noon on a Saturday and the gourmet bars in KaDeWe’s legendary food hall are bustling. There’s no need to be a dedicated foodie to be awed by this vast gourmet labyrinth ensconced on the sixth floor of continental Europe’s largest department store. Take your sweet time to marvel at the tantalizing displays of specialty cheeses, chocolates, teas, wines, cakes, spices and other treats, then join the locals at one of the food counters for a leisurely lunch. There’s around 30 to choose from, with aproned staff in chef’s hats doling out everything from oysters, lobster and sushi to entrecôte, quiche and Lenôtre pastries, all best washed down with, yes, a glass of bubbly. 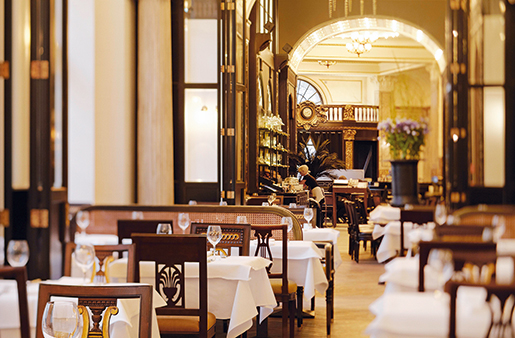 The Sophisticated: Grosz
Although only open since December 2012, Grosz does a masterful job at recreating the timelessly elegant aura of a Golden Twenties café. Named for the German expressionist painter of that era, this high-ceilinged symphony of marble, brass, mirrors, glossy woods and stucco is a tranquil retreat from bustling Kurfürstendamm, Berlin’s premier shopping strip. At breakfast time, you’ll be greeted by a good-mood-inducing aroma of fresh croissants wafting from the in-house bakery. Its pâtissiers also produce the most gorgeous cakes, including the famous Princess Victoria tart, a mouth-watering mash-up of white chocolate and pistachios. For dinner the focus is on fine crustaceans, meats and fish prepared in time-honoured continental fashion. •
Photography by Andrea Schulte-Peevers and respected establishments
Travel Facts