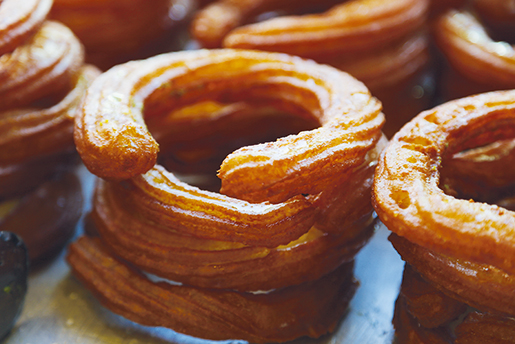 Eating is a full-time occupation in Istanbul with visitors able to graze on Turkish treats from street stalls and noisy bazaars or dine at five-star restaurants.

Pyramids of white sugar-dusted Turkish delight piled high on silver trays tempt all who wander through Istanbul’s noisy, colourful Spice Markets that have been trading for more than 350 years.

Turkish Delight, known as lokum, was once considered an after-dinner digestive in the Ottoman days and is still loved by locals and tourist alike. Our guide Robina says however: “There is Turkish delight – then there is the ‘real’ Turkish delight and there’s a world of difference.”

“Here taste this,” she says as we pass a stall with trays of the gem-coloured sweets laid out in neat uniform rows, some studded with pistachios and walnuts. You can only taste test from a basket that is offered to tourists in the hope they will purchase some to take home and few can resist.

A portly stall-owner whispers in a gravelly voice that he makes his lokum from recipes handed down through five generations and nothing is as good as his sweet treats. But I detect a slight wink from Robina. Then, the stall holder opposite shouts robustly, “No, mine is definitely the best.”

His assertion automatically sparks a war of words that spreads like wildfire along the confectionary stalls, but it is all in good fun and encourages a Turkish delight shopping spree.

“Later, we will taste the best,” Robina assures me.

Stepping into the Spice Market, also known as the Egyptian Bazaar, is all about sensory overload. The heady aromas of brightly-coloured spices are almost overwhelming as you pass by stalls that also sell apple tea, China flower tea and Russian Caviar. You will also find fine linen, beautiful striped hamam wraps and soaps, pretty ceramics, woven rugs and cushions and of course souvenirs. 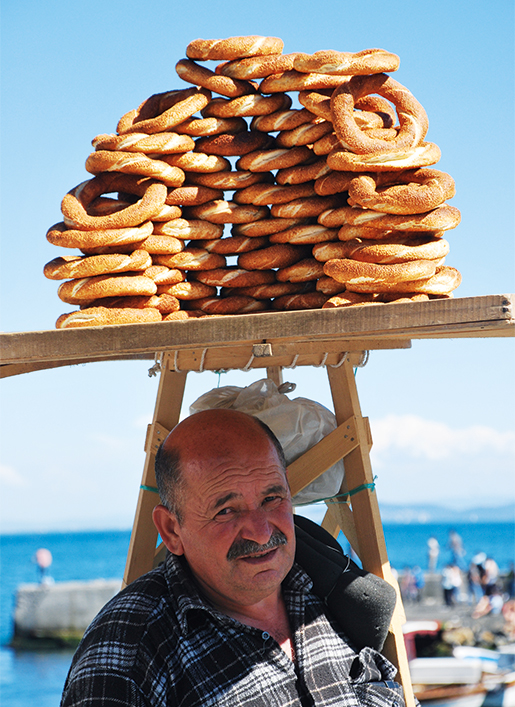 One thing is for sure you will never go hungry in Istanbul and anywhere you wander becomes a culinary adventure. Street vendors sell fruit and tasty treats outside top tourist attractions including the Topkapi Palace and the Blue Mosque. Ruby-red watermelon, bags of bright red cherries, barbecued sweet corn and carts stacked with simit, a ring of flaky bread topped with sesame seeds and baked a golden brown, keep hunger pains away.

Robina tells us locals often use lashings of chocolate spread on simit, which she doesn’t approve of and it is definitely not Turkish. Simit is usually enjoyed with Turkish tea known as cay that is served in small ornate tulip-shaped glasses. You see cay being delivered by tea-servers to shop owners and workers who often pay a monthly rate to have their welcome beverage delivered hot. We take our first cay in a small Ottoman-era caravanserai in the historic Perşembe Pazarı of Karaköy near the ancient mariner section where anchors and heavy chains are for sale.

A breakfast feast follows at a cute esnaf lokantası or tradesman restaurant, where locals go for fast, fresh home-style cooking and a lively atmosphere.  We dine on spicy scrambled eggs with slices of grilled beef sausage served with Turkish pide bread. Bowls of plump black and green olives, plates of sliced cheese and ripe tomato and fresh fig jam served with kaymak, a type of unpasteurised clotted cream made with buffalo milk, appear on the table.

The cream is divine but certainly not good for the waistline, but that is an occupational hazard if you are holidaying in Istanbul. The Turks love fresh bread served with every meal and you are never far from a bakery.

A wide variety of flatbreads or lavas, including ones that are puffed up like balloons are often displayed at the front of restaurants. The balloon breads are broken up and are great for scooping up meze and mopping up sauces.

Pide is canoe-shaped bread served with different toppings such as spiced minced lamb, cheese and tomato, grilled bell peppers and the traditional lahmacun which is similar to pizzas base.

We also sample regional specialties such as tantuni, a mix of lamb or beef cooked until tender, mixed with sumac, diced tomatoes, and parsley and ıslama köfte, a traditional dish of sliced bread dipped in meat broth and grilled along with meatballs served with tomato slices and green hot peppers.

One of my favourite snacks is midye dolma or pilaf-stuffed mussels which are also often sold on the street tempting many to indulge on the way home from work. The plump orange-lipped mussel is served with tasty rice and a squeeze of lemon and you scoop it out with the top half of the shell.

Certainly not on my grazing list of foods to try are liver and offal which are popular with shops and cafes that specialise in these dishes. “The secret to great liver is it must be extremely fresh, thinly sliced and it must be fried in good oil that gives it a crust – but it is definitely an acquired taste,” Robina says.

Offal lovers may also enjoy kokorec that is spiced offal wrapped in lamb’s intestines and cooked over an open fire while kelle paça, sheep’s head and feet soup has a dedicated following.

But you can’t go past mouthwatering mezes that have become a symbol of Turkish cuisine and there are always plenty of dishes to choose from. Most mezes are served as appetizers in restaurants with waiters showing all that’s available on a big plate so diners can make a selection. 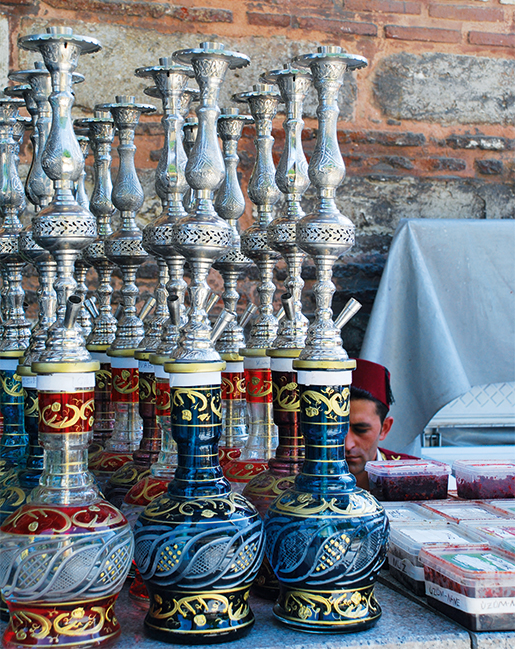 Meze go well with the popular rakı, an unsweetened, anise-flavoured alcoholic drink that can take your breath away while ayran is a savoury plain yoghurt based drink is another acquired taste.

One of Turkey’s most famous culinary dishes is doner kebab that literally means “rotating grilled meat” that is popular the world over. You will find a doner kebab cafe on what seems like every street block in Istanbul where it is a popular take away.

Layers of deboned lamb, beef or chicken are slowly cooked on a vertical rotisserie, sliced thinly with a special knife and wrapped in a flatbread served with tomato, onion with sumac, pickled cucumber and chili.

Fish is also a staple in Istanbul and you only have to head to Galata Bridge, at the entrance of the Golden Horn and Bosphorus, to see Turkish fishermen trying their luck.

Tasty fish sandwiches cooked on traditional boats tied to the nearby quay are a delicious snack accompanied with cold beers delivered in a bucket. Locals and tourists sit at small tables enjoying the fresh fish while waiters yell “Balık ekmek” – fish in bread, and the sun sets over the Bosporus.

As our Turkish culinary walks winds up we head to a traditional coffee house at Fazıl Bey’in Türk Kahvesi. A narrow staircase leads to a cosy room on the second floor where coffee is served in a small cup with thick foam on top that seals it to keep it hot. Decide if you want coffee without sugar, a little sugar or a lot as the sugar is brewed with the coffee.

Robina advises us to sip it and don’t drink the remains – instead she tips the dregs up on the saucer and says if we can see any imagery in the coffee left overs it will provide a hint of our future.

Baklava lovers are well taken care of in this city with lots of the sugar-drenched treat in many shops but for some of the best try Gaziantepli Baklavacı Bilgeoğlu.

You can’t leave Istanbul without buying a Turkish ice cream and having a bit of fun with traditional ice-cream sellers who frequent the old city tourist area. It is certainly not a matter of opening a freezer to get a scoop of ice cream in Istanbul – it is all about showmanship.

Ice-cream sellers put on a show as customers take their cone or try to. With a great flourish the ice-cream sellers twist and turn the ice cream on a long rod making it difficult to grab.

The maras dondurma ice cream that originated from the eastern province of Maras and is known for its elasticity is well worth the wait.

As for that best Turkish delight in Istanbul, we head to an old shop Kiblecesme Caddesi 96 Kantarcilar Eminonu, where for the past four generations since 1865, they have been making Turkish delight. The owner is 86 and offers a taste of his gourmet sweets which melts in our mouth and tastes sensational. It is definitely the best I have ever tasted and believe me I am a Turkish delight connoisseur from way back. • 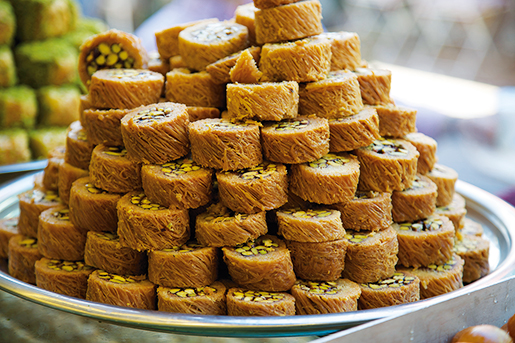 A number of airlines fly from Australia to Istanbul with various stopovers and codeshare including:
Qantas. 131-313; Qantas.com.au
Emirates Airlines. 1300-303-777; emirates.com
Singapore Airlines. 131- 011; singaporeair.com

To avoid the crowds and the heat, visit Istanbul from September to November. Peak season – summer is hot and crowded.