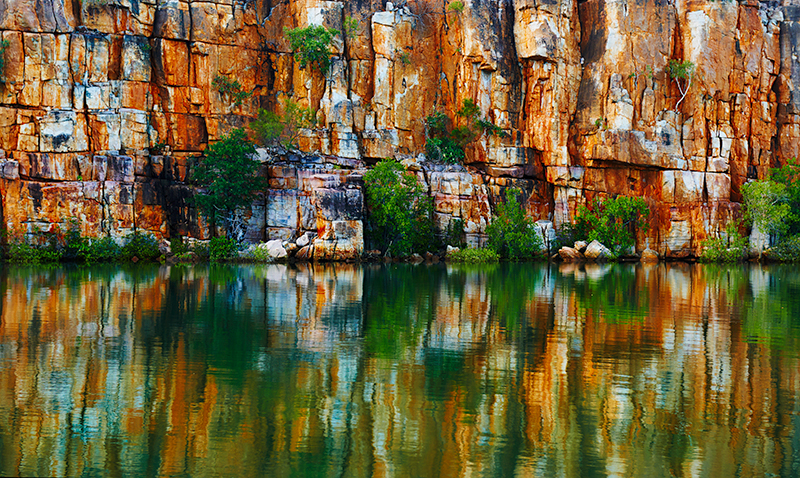 “I love a sunburnt country,
A land of sweeping plains,
Of ragged mountain ranges,
Of droughts and flooding rains.
I love her far horizons,
I love her jewel-sea,
Her beauty and her terror –
The wide brown land for me!”
– Dorothea Mackellar

These famous words by Dorothea Mackellar, one of Australia’s most-loved poets, perfectly describes the savage grandeur of the Kimberley region in the country’s remote north-west.

Even today, nearly 250 years after European settlement, this vast expanse of ancient rock and desert landscape is still one of the most sparsely populated regions on the planet.

Throughout much of the rest of the central Australian desert, fossils and prehistoric artefacts can be found strewn across the limestone and sand, like some child’s discarded toys. Not in the Kimberley. These rocks were laid down nearly 2,000 million years ago, well before there was anything living to fossilise. Walking among the jagged and hostile formations sprouting unfamiliar plants, it’s easy to imagine you’ve travelled back to the dawn of time or even a far-flung planet. 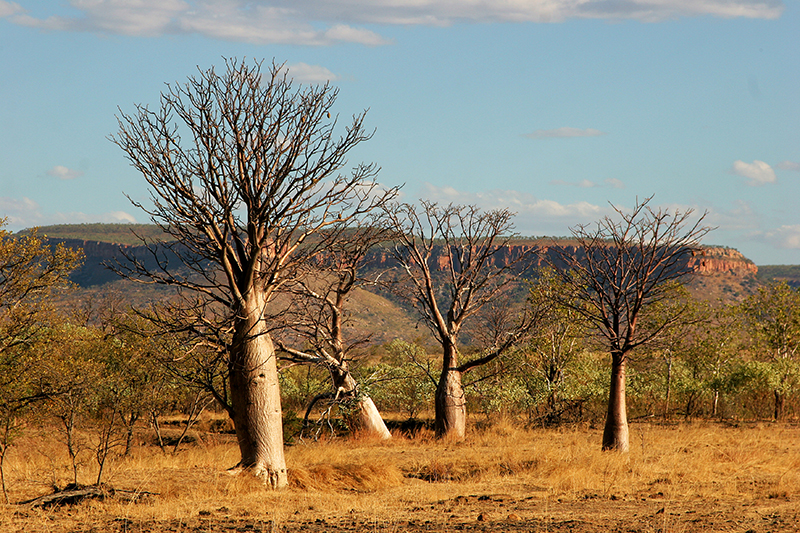 For many folks, their first glimpse of the Kimberley was Baz Luhrmann’s 2008 blockbuster, Australia. It was no coincidence that the tourism masterminds and movie makers chose to set their epic tale amid the arid hills and labyrinthine river gorges of this iconic landscape. “Her beauty and her terror,” precisely.

While this alien landscape may appear devoid of life, researchers have discovered what some claim to be the oldest known rock paintings. The only reason these mystical and beguiling, so-called ‘Bradshaw’ or ‘Gwion Gwion’ figures cannot be accurately dated is that they are so old, they’ve become part of the rock itself. Even so, they can be safely assessed as older than 20,000 years, perhaps even 50,000. And who were these fantastic people? The present day Aboriginal clans responsible for the more modern ‘Wandjina’ artwork are split on their origin, while theories about a mysterious prehistoric race have fuelled debate for decades.

The Kimberley epitomises the uncompromising terrain and staggering ‘beauty’ that so mesmerised poets and scribes, yet deterred settlement and exploitation for centuries. Even today, with mankind’s technological might, the Kimberley resists our incursions, thwarting attempts to plunder its mineral treasures. But for how much longer? The seemingly limitless natural gas reserves are tempting the hungry multinational explorers eager to drill, pipe and ship. 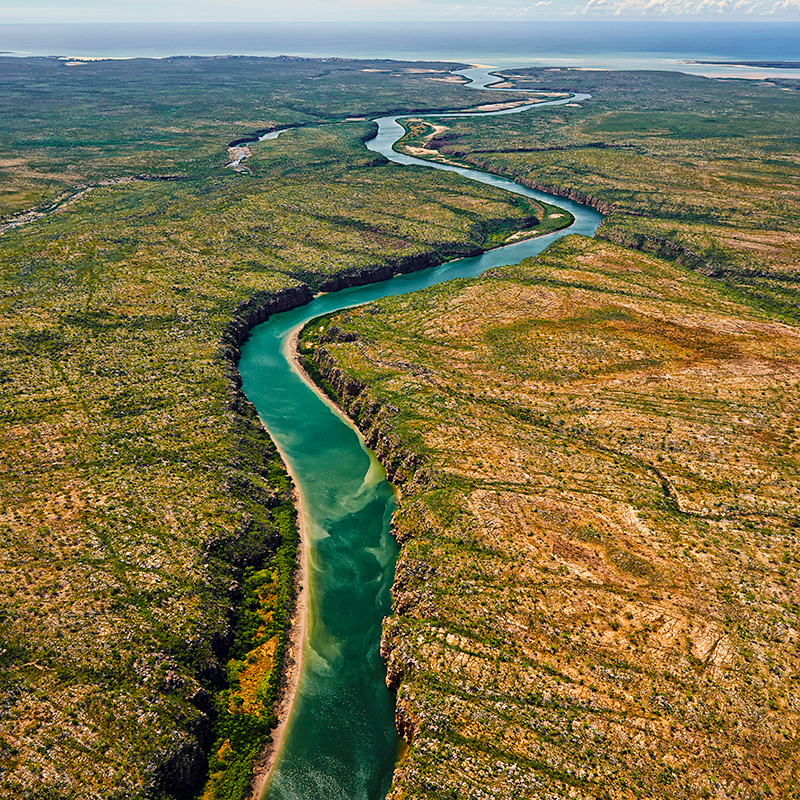 What is it that so drives conscientious travellers to immerse themselves in this land seemingly forgotten by time? Is it the urgency to see one of the planet’s last untouched landscapes before the urge to plunder prevails or the ancient mysticism that permeates every outcrop? Whatever the motivation, no-one returns from the Kimberley unchanged. It affects all who visit, intoxicating and beguiling in equal amounts.

1. Broome – the unofficial capital of Australia’s North West
You could easily call Broome the de facto capital of the North West. Once a ramshackle outpost for pearlers and itinerant fishermen, wealth from pearls, mining and tourism has elevated the town way beyond its rough beginnings. Broome is also the major port for adventure and expedition cruisers heading out to the Kimberley coast, so almost all passengers will spend some time in this remote community. Apart from pearls and the mandatory Cable Beach camel rides, there are some excellent Aboriginal art galleries and the hovercraft rides out onto Roebuck Bay are one of the last commercial hovercraft rides available in the world. 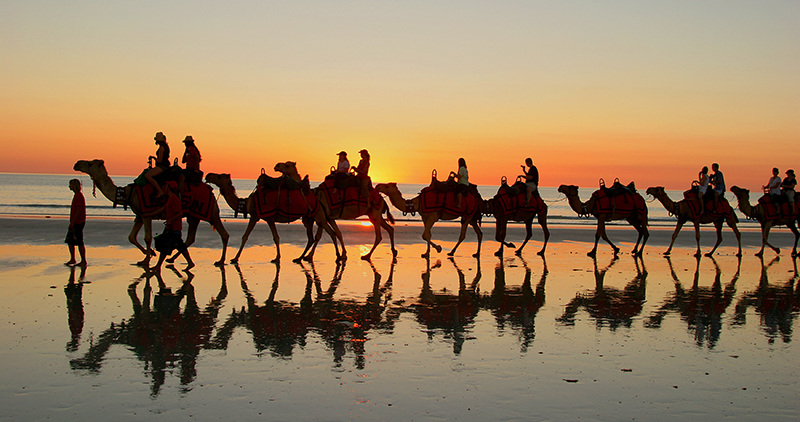 2. Kununurra – gateway to the Ord
Situated in the East Kimberley, the outback town of Kununurra is the logical end of the Gibb River Road near the Northern Territory border and the ideal location to start or finish a Gibb River Road drive. It’s also the location of the famous Argyle Downs Homestead Museum, site of the original pioneering Durack family property, most of which is now submerged by the equally famous man-made Lake Argyle.

The mesmerising ancient landscapes of the Kimberley extend way past the coast, inland to the eye-boggling Bungle Bungles (now more correctly known as the UNESCO World Heritage-listed Purnululu National Park) along the infamous Gibb River Road and through some of the wildest, oldest and most fascinating territory imaginable.

Kununurra and its manmade mini-ocean, Lake Argyle, which holds nine times more water than Sydney Harbour, is full of its own outback adventure and those keen to follow cinematic themes can trailblaze Hugh and Nicole’s Australia or venture to that place of nightmares, Wolf Creek. 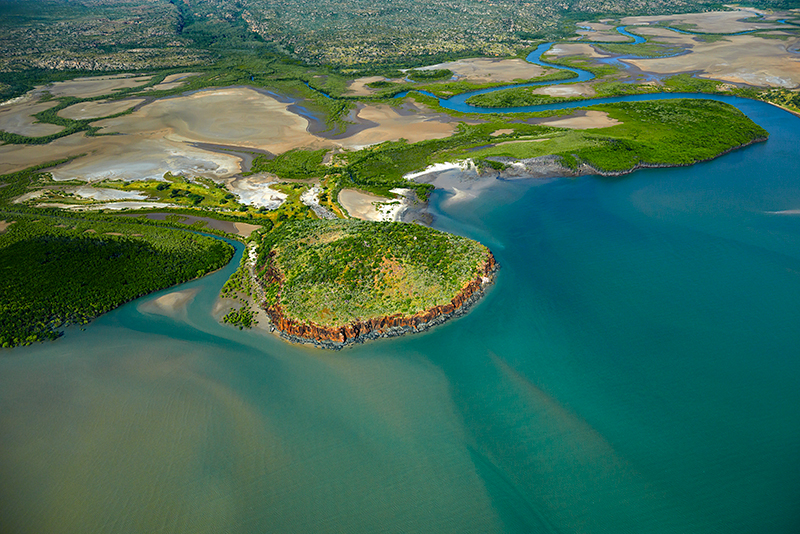 There are tours you can join, or the more independent-minded can set off on their own self-drive adventure checking into any of the several homestead ‘resorts’ or international standard luxury retreats like El Questro or Berkeley River Lodge.

3. Buccaneer Archipelago mysteries
The Buccaneer Archipelago is a stunningly rugged area off the Kimberley coast consisting of some 1,000 islands. The scenery is spectacular with secluded white sandy beaches, patches
of rainforest, mangrove estuaries, plunging cliffs, indigenous rock art and hidden reefs that litter offshore waters. Its distant location has kept it an unspoilt and remarkably pristine location to explore and experience.

Here too, tides of up to 11 metres are among some of the biggest in the world, and certainly the largest in Australia. In some places they are treacherously strong and unpredictable, surging up rivers and ripping through inland passages. 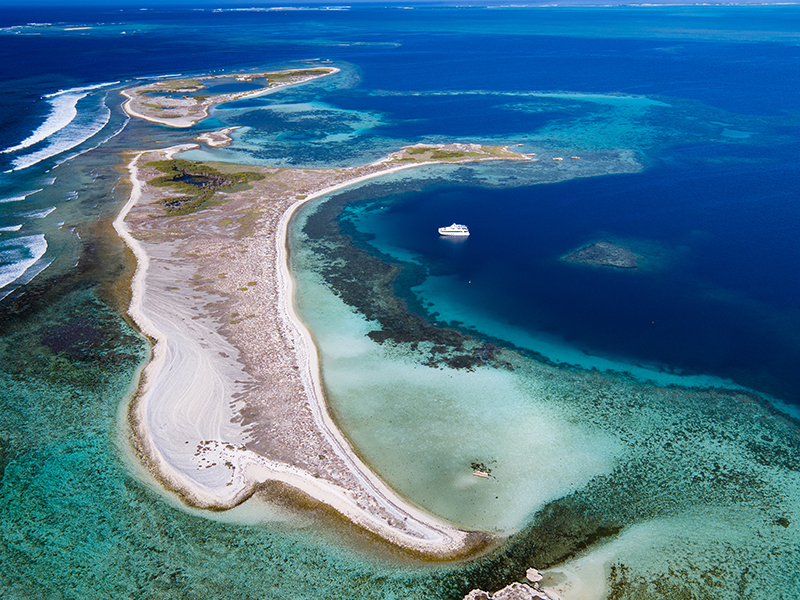 The warm weather, water and remoteness of the archipelago have created an incredible breeding ground for a huge array of wildlife including crocodiles, snakes, birds, bats and most importantly, fish. Visitors to the Buccaneer Archipelago find the fishing here exceptional and many species inhabit the region in abundance. Your catch could include barramundi, coral trout, red emperor, trevally, snapper tuna and Spanish mackerel, as well as oysters and enormous mud crabs.

Even further afield, the Rowley Shoals is made up of three untouched coral atolls lying 340 kilometres west of Broome. As a protected marine conservation park it is home to a wide variety of corals, fish, molluscs and other invertebrates, some of which are unique to Australia.

4. Karijini National Park
If Australia’s North West is all about adventure, then exploring the ancient rocky tunnels and plunging gorges, paddling through crystal-clear waterways and swimming under stunning waterfalls are surely some of the best bits. And what’s more, most of this amazing scenery is all within easy reach. 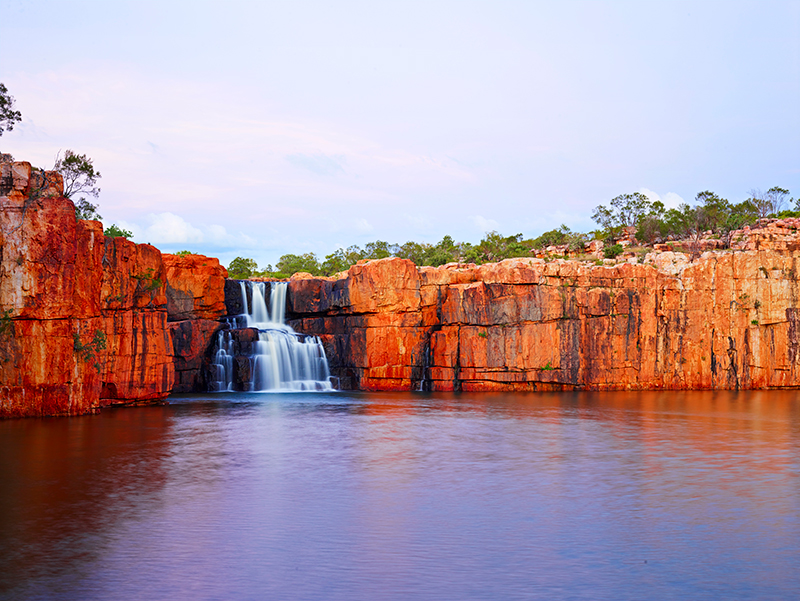 A great time to go is during ‘The Karijini Experience’, a five-day event that allows guests to see and enjoy this magical part of the world in a unique way. Now in its fifth year, the Experience is held on the traditional lands of the Banjima people, and is a celebration of environmental protection, connection and culture. On from 11–15 April 2017, you will see the best of the landscape as well as experience many cultural activities and special events.

5. Coral Coast
Follow the coast and discover some of the world’s most diverse marine habitats, just metres away from pristine beaches.

The UNESCO World Heritage-listed Shark Bay and Ningaloo Reef is the largest fringing reef on Earth and one of the few places in the world where you can swim with the largest fish
in the sea, the gentle whale shark. Swimming with these giants of the sea is an unforgettable experience, and even if they are not in the neighbourhood when you are there, you will be distracted by the coral gardens, giant manta rays, turtles and, at the right time, humpback whales. This undersea gem is absolutely world-class. 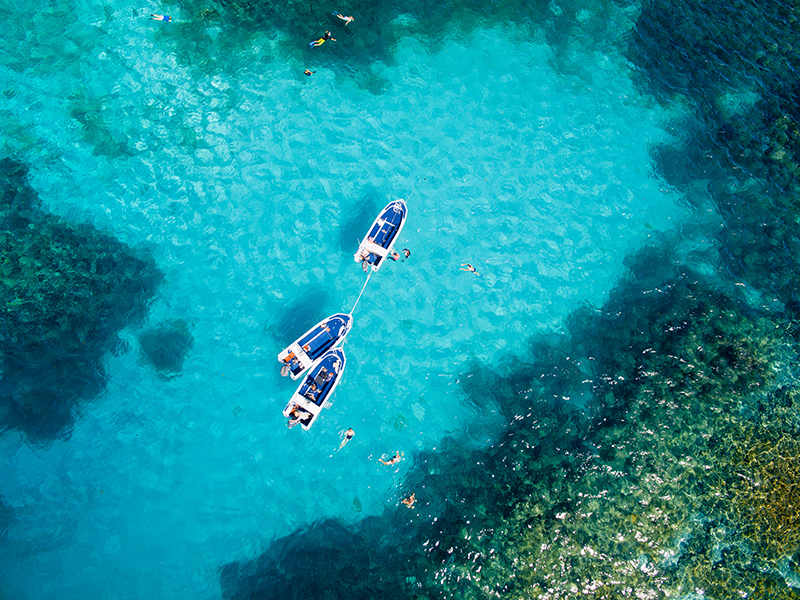 One of the best way to see the whale sharks is with Sail Ningaloo, which offers day tours and three-to-12-day tours to maximise your Ningaloo experience. For divers, this is about
as good as it gets, but if you aren’t up to diving into the deep, the snorkelling is just as thrilling.

At Monkey Mia, the famous dolphins can be seen up close. Wander the fascinating natural formations of the Pinnacles Desert moonscape, or for the ultimate coastal adventure,
take a hike along Kalbarri’s dramatic landscapes, where 400-million-year-old river gorges meet the Indian Ocean.

6. Waterfalls by air and sea
Purpose-built vessels like True North and Great Escape have honed their itineraries over the decades to a truly fine art, engaging the most knowledgeable guides and lecturers to deliver the most complete and comprehensive explorations available.

Between May and September every year, a small fleet of expedition and adventure vessels conduct enriching, naturalist-escorted tours throughout the labyrinth of estuaries, waterways and coves. Teeming birdlife, mysterious archaeological sites, awe-inspiring landscapes and natural phenomenon witnessed by very few Europeans are just part of the seemingly irresistible allure of the Kimberley.

At Talbot Bay, the Horizontal Waterfalls were described by David Attenborough as “one of the greatest natural wonders of the world”. This highly unusual phenomenon occurs as the huge, ten-metre tides ebb and flow between a tiny gap in the ridge within the bay in the Buccaneer Archipelago. It’s possible to fly in by seaplane to do this experience, or else any of the small adventure vessels regularly conduct adrenaline rides through the rapids using high-speed tenders. 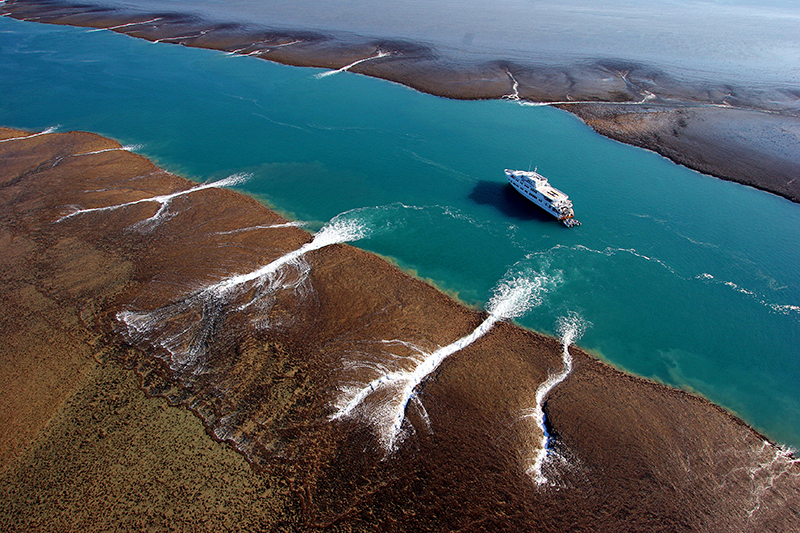 The more conventional Mitchell Falls are superb cascades, named after the marvellous plateau, and are perhaps the crowning glory of the scenic attractions of the Kimberley. Scenic flights, either fixed-wing or helicopter, are the best way to view these falls which are at their most impressive early in the season before the deluge of ‘the wet’ is fully drained.

The way to cover a lot more territory in these wide open spaces is by air. Truenorth Helicopters offers a number of options but the most suitable is a safari that delivers breathtaking natural wonders, river cruising and a stay at a working cattle station or two. The nine-day safari is in an EC 145 twin-engine helicopter and you will be glued to the windows as you take in the sights with highlights being Purnululu National Park (Bungle Bungles), rock art, waterfalls, King George Falls and more. Stay in a working cattle station as well as luxury locations such as Home Station, Kimberley Coastal Camp, Kimberley Wilderness Camp and Berkeley River Lodge, as well as Bullo Station in the Northern Territory.  •

Photography by ©Roderick Eime and as supplied 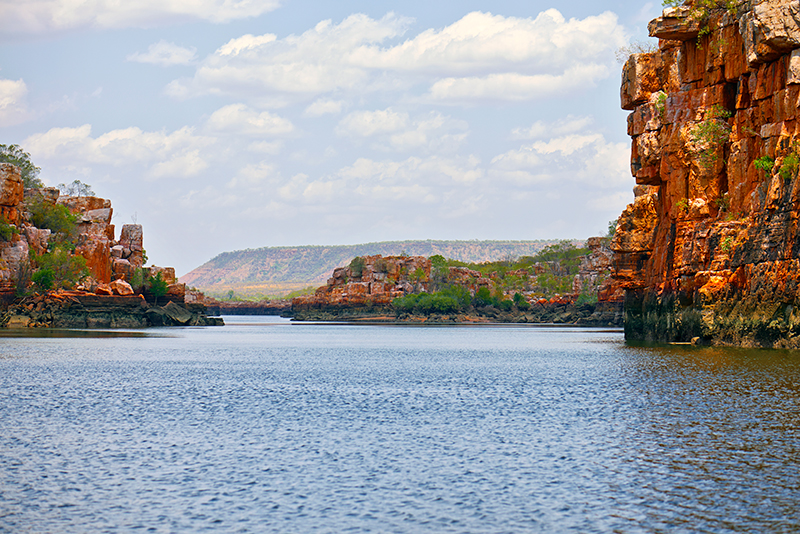 GETTING THERE
Fly direct with Qantas to Broome from Perth, Sydney, Melbourne, Brisbane and Darwin. Virgin Australia (which acquired regional carrier Skywest in 2013) operates direct flights to Broome from Perth and connecting flights from all other capital cities: qantas.com; virginaustralia.com