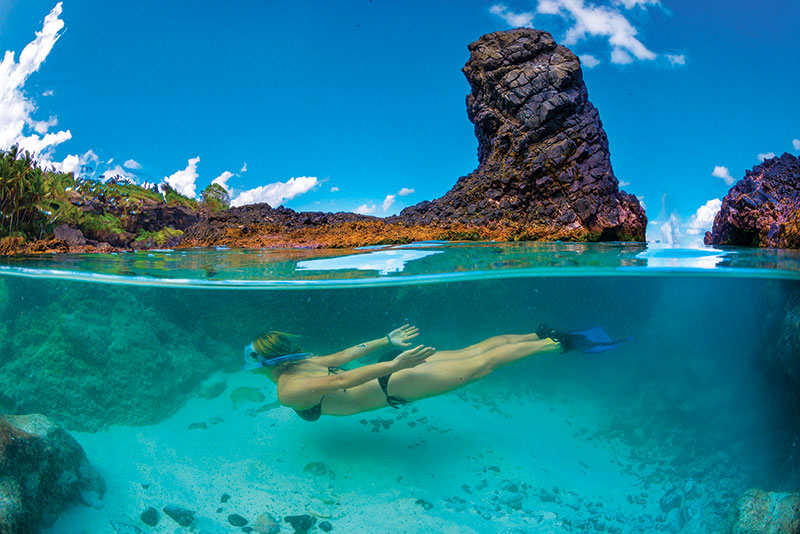 There are so few islands in the world that lay claim to miles of idyllic seascapes; UNESCO World Heritage protected habitats and endless recreational pursuits while at the same time, place you in the heart of an ancient continent’s soul. Natural spaces that evoke tranquillity revive the senses and bring about pleasurable experiences. But there’s more than indulging in mere idle island play; it’s the thrill of discovering unspoiled beaches, wilderness trails and secluded inlets untouched by time. Places where you can leave your eco-footprint, tick off your bucket list and dream the day away.
Here is a list of ‘must experience’ islands that encapsulate the very essence of Australia’s vibrancy and splendour.

Kangaroo Island
Distinguished by chiselled rock formations and windswept beaches, Kangaroo Island is the perfect destination and is a short hop by ferry from Cape Jervis near Adelaide. Protected by multiple national parks and its isolated location, many visitors to K.I, as it is known, start their island discovery at Kingscote and wend their way to Flinders Chase National Park, home to an abundance of wildlife including fairy penguins, seals, wallabies, echidnas and of course, kangaroos. Along its wind-battered southern shore is where you will find colonies of sea lions and other native marsupials along with incredible rock formations including Remarkable Rocks at Kirkpatrick Point. Another unexpected treat is the panoramic view of the Great Southern Ocean from Vivonne Bay Bistro’s panoramic windows. And while you’re enjoying a glass of vintage red, you can try to spot the island’s koalas slumbering in the groves of surrounding eucalyptus. 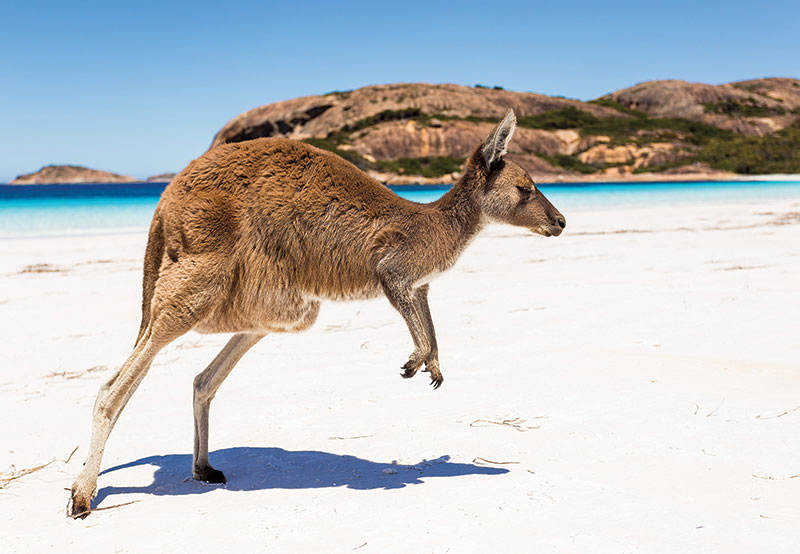 Rottnest Island (Wadjemup)
Just a short boat ride from Fremantle is Rottnest Island. Fringed by white, sandy beaches and the cerulean waters of the Indian Ocean, the island was discovered by the Dutch in the 18th century before it became a notorious penal colony. Take a walking tour or hire a bike and cycle around the island which was once inhabited by Australia’s Noongar people and be captivated by any of its 63 beaches where water adventure activities abound – snorkelling, diving, fishing and surfing. Be captivated by the gorgeous quokkas – small wallaby-like marsupials that hop all over the island. Visitors should also pay homage to the indigenous people imprisoned during the 19th century at the height of the island’s salt trade. The Salt Store tells of the island’s history through photographic images.

Lord Howe Island
This sub-tropical jewel has long attracted a steady stream of eco travellers and honeymooners. Brimming with World Heritage-protected flora and birds, and hotly contested as Australia’s most underrated getaway, Lord Howe’s sublime appeal extends beyond its fierce volcanic rock formations, pristine waters and ancient Kentia palms and Norfolk pines that fringe a crescent-shaped shoreline. There is nothing but time here – time to stroll deserted beaches, blaze a nature trail or dive amid the island’s Marine Park; a composition of vibrant coral reefs and deep underwater caverns that rise from the sea floor. There are also over 60 diving locations where you can swim with a vast array of tropical and temperate marine species found nowhere else on the earth. Its unique ecosystem also nurtures over 130 endemic species which nest in the coastal grasses, cliffs and the Valley of Shadows. There are many beautiful walks to do, ranging from easy to the vertigo-inducing Mt Gower, which towers over the island like a protective mum. If you remember the golden era of the sea planes that once serviced the island, visit the Flying Boat Island Museum and have a sundowner at the legendary Pinetrees on the lagoon to imagine what it would have been like landing in a Catalina float plane. 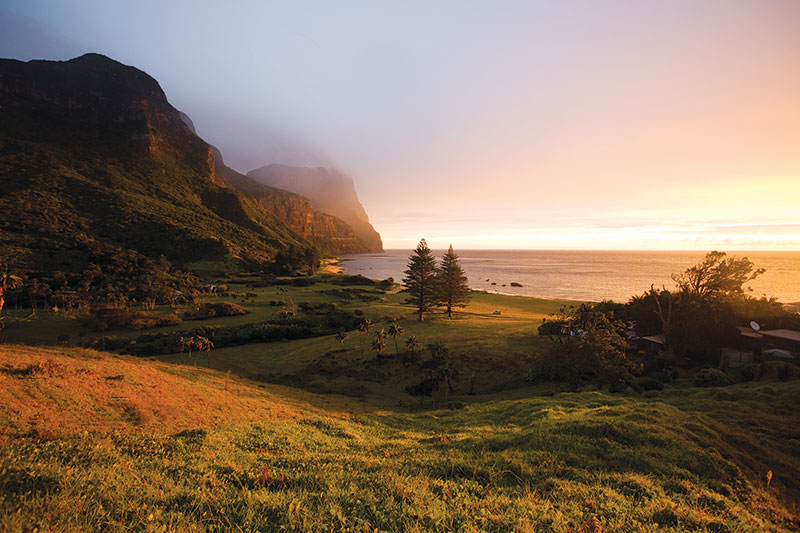 Christmas Island
Though this tiny paradise nestles closer to Indonesia than Australia, in recent years Christmas Island has attracted many to its colourful coral reefs, crystal blue waters and a labyrinth of nature trails that wind past natural springs and dramatic blowholes that blast out of rock crevices. But it’s not just the flora and fauna that is visually enticing. Each year during the wet season (October to December), millions of snapping red crustaceans emerge from the rainforests to make their way to the shore where they mate and spawn – tingeing the shallow waters in hues of red-pink with their eggs. Locals have even built special bridges for them. 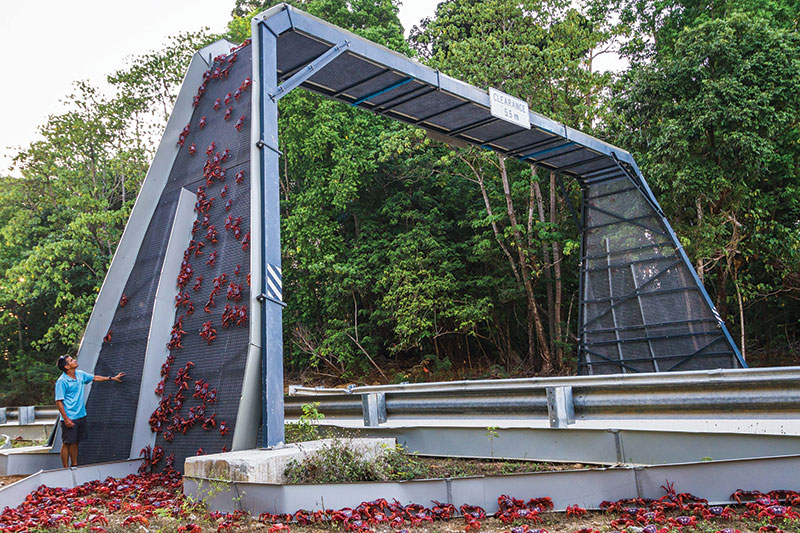 Hayman Island
Anchored at the northern point of the Great Barrier Reef’s Whitsunday archipelago is the One&Only Hayman Island Resort, a glorious tropical haven. Make your way to the jetty, grab a snorkel and explore the colourful marine life; graceful manta rays and pods of spinner dolphins will likely follow you as you swim around groves of colourful reefs. You can also charter a helicopter or seaplane, or set sail to the neighbouring islands where, beneath the glistening turquoise waters the magic of the Whitsundays continues. Perhaps the most spectacular is Heart Reef, a kaleidoscopic composition of heart-shaped coral.

King Island
Though its setting is rugged and mercurial, King Island’s juxtaposition of pastoral fields and quiet, workhorse villages quickly reveals another side to its unique personality. And the best way to enjoy this picturesque island is through the eyes of its 1500 inhabitants. Walk anywhere around the township of Currie and you will quickly immerse yourself in its thriving arts community, and its legendary King Island dairy produce. Sample some cheese and delectable whipped cream at one of the local rustic cafés along Currie Wharf. Also, visit the King Island Fromagerie and Cape Wickham Lighthouse, built in 1861. If you’re able to defy the ripping winds explore old shipwrecks that rest silently in the shallow waters known as the King Island Maritime Trail. For nature buffs, the heavy hitters are the island’s migratory seabirds and Elephant seals, which are often found basking on jagged rocks at the water’s edge.

Lizard Island
There’s nothing ordinary about Lizard Island, a remote atoll and national park endowed with ravishing, white sandy beaches, coral reefs and the bluest of lagoons. Accessed by private charter and home to Lizard Island Resort, its opulent seclusion promises you an opportunity to reset your body clock for optimum pampering. Lauded for its dizzying array of water activities, enjoy your first snorkel at Watson’s Bay or sail a catamaran amid mesmerising marine life. You can also laze beachside with a gourmet picnic hamper, enjoy an indulgent spa treatment and leave your eco-footprint in the sand before you take a flight over the World Heritage-listed Daintree Forest.

Norfolk Island
For a sleepy atoll brimming with human drama and natural beauty, Norfolk Island is hard to beat. Twice serving as a notorious penal colony, not surprisingly the island has a unique air about it which goes beyond its historic stance. To discover this tiny speck of land, team up with a local outfitter and immerse yourself in the island’s Polynesian culture and rugged beauty. Norfolk Island National Park beckons on the northern edge of the island as does Emily Bay’s coral reefs, which you can view from a glass bottom boat. As a cultural sampler, soak up the island’s penal history in Kingston, a community built by convict labour. But first get your bearings at the Bounty Folk Museum, which tells the story of the HMS Bounty’s charismatic mutineer, Fletcher Christian and his crew whose descendants still inhabit the island. 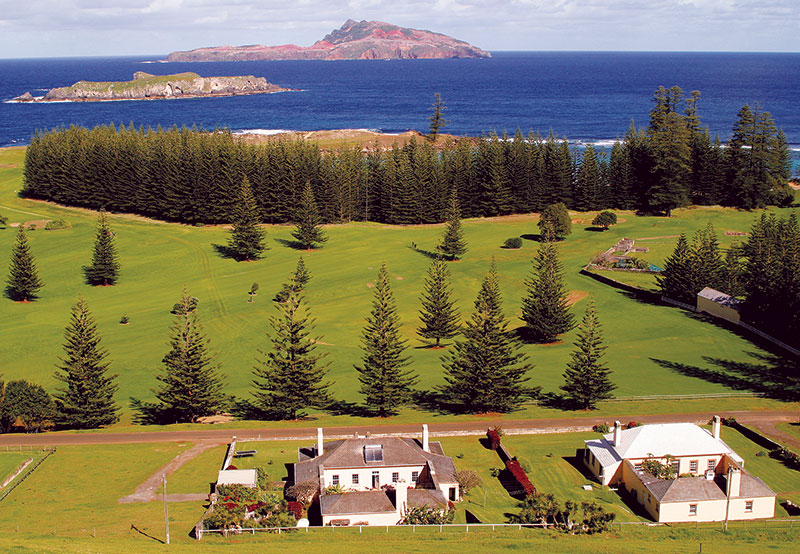 Fraser Island
This glorious island has some of the finest beaches you will ever see along with a natural, untamed feel; where its ancient rainforests, wetlands and coastal sand dunes remain remarkably unspoiled. An eco-paradise, Fraser Island is equally famous for whale spotting and its local population of dingos. While you’re on the beach, trace their footprints and turtle shell markings in the sand. And after you view the infamous Maheno shipwreck in its shallow grave, explore the world’s largest, heritage-listed sand island in a four-wheel drive before you snorkel off-shore with playful dolphins.

Bathurst Island
When you close your eyes and hear only the native tongue of the Tiwi people, you know they are the real custodians of this island paradise, located 80 kilometres from Darwin in the Arafura Sea. A lush habitat for a variety of flora and birds, Bathurst Island mostly remains unchanged since Dutch explorer, Abel Tasman, discovered it in 1644. For most of the year, the only noise you are likely to hear is the breaking surf and ceremonial dances, with indigenous traditions living large. A highlight of any stay is visiting local artists and learning about their history through their wood carvings, textiles and bark paintings. Tours here can be arranged from Darwin.

Hamilton Island
As soon as you touch down on the island, slap on some sun block and immerse yourself in intense vacation pursuits. Surrounded by miles of colourful coral reefs and the Whitsunday’s prized Whitehaven Beach, arguably one of the most beautiful in the world, there are more things to do than is humanly possible. But don’t let this distract you from the simple pleasures. Hamilton Island’s imperceptible shift from being a sedentary resort to an outdoor enthusiast’s dream – parasailing, skydiving, sailing, diving and 18-hole championship golfing –
is still tempered by a distinctly laid-back atmosphere, golden sunlight and swaying palms.

Maria Island
This windswept Tasmanian island was once one of Australia’s best-kept secrets – but no more. This one-time convict probation station is now home to Maria Island National Park,
a conservationist’s nirvana. One of the best times to view the island is in the early morning when the dense woodlands and rocky shoreline are shrouded in ethereal mist. By the time the sun breaks through the clouds, you will have a good chance of encountering the island’s resident beachcombers up close – nesting seabirds, seals or a pod of whales in the open waters offshore. And beyond the nature trails is the World Heritage-listed Darlington Probation Station, a compound of 14 colonial buildings and ruins. The best way to see the island is on the Maria Island Walk – a four-day walk that includes magnificent food, good wine, the incredible wildlife and history. •