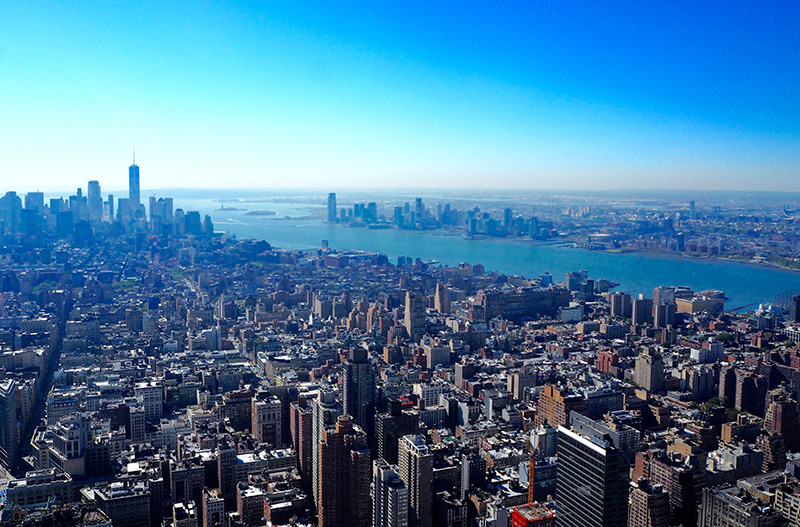 ‘If I can make it there, I’ll make it anywhere…’

As the song goes, if you can make it in New York, especially in the competitive world of art dealing and gallery proprietorship, then you really have made it.

To then take it to the next level and successfully remain there takes precise planning mixed with boundless enthusiasm, talent, charm and commitment. And that’s exactly what Aussies Tim Olsen and Emerald Gruin, the savvy proprietors of the Manhattan Art Gallery the ‘OLSEN GRUIN’ have in abundance.

Tim Olsen is the son of one of Australia’s most famous living artists John Olsen, who is an Australian icon and one of the most adored, unique, loved and talented artists alive today. 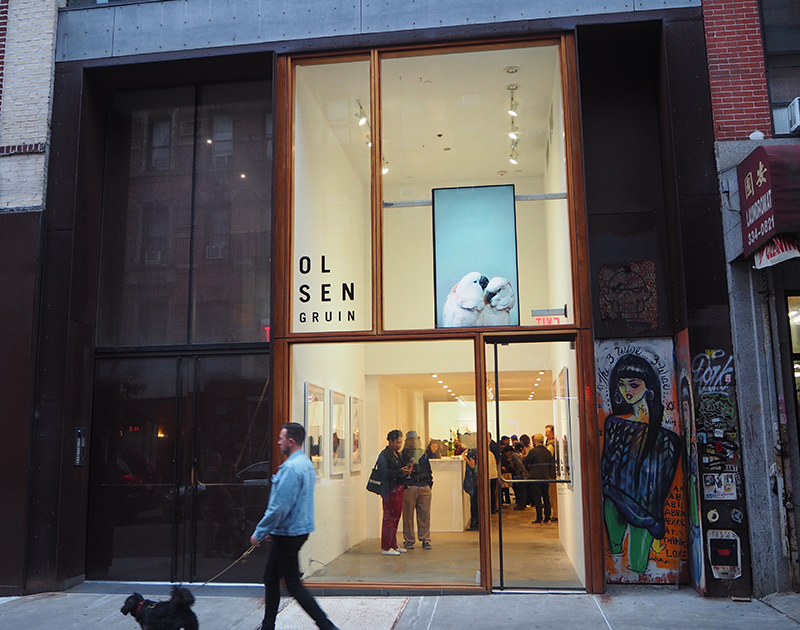 So naturally growing up with the wafting scents of oils, watercolours and pastels seeping into Tim’s DNA, art was always going to play a massive role in his life.

Tim in his formative years showed great potential to be an artist like his father but had an astonishing ability to assess exceptional artwork from an absurdly young four years of age. From this diminutive stage of his life he had the passion and drive to be an art dealer. 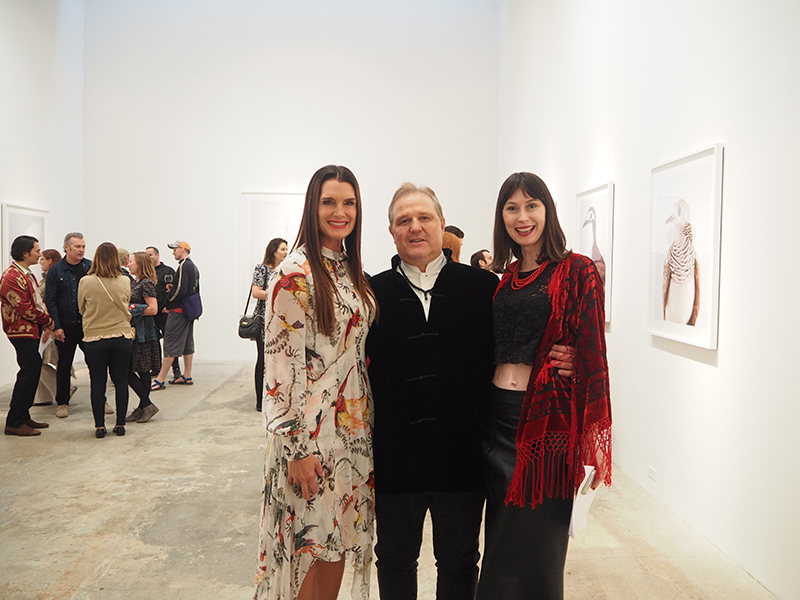 While most young kids his age were splashing in mud pools and pulling their sister’s dolls apart, Tim was already observing and assessing art masterpieces. That’s the path he chose and he’s never wavered or looked back.

After Tim finished his schooling he completed his diploma of Visual Arts majoring in painting and print making at the National Art School in Darlinghurst and was awarded a Bachelor of Education at the University of NSW College of Fine Arts.

Born in Sydney, Tim’s early working life saw him managing a variety of restaurants and renowned local galleries some of which included the Rex Irwin Art Gallery in Woollahra and the Roslyn Oxley9 Gallery in Paddington. 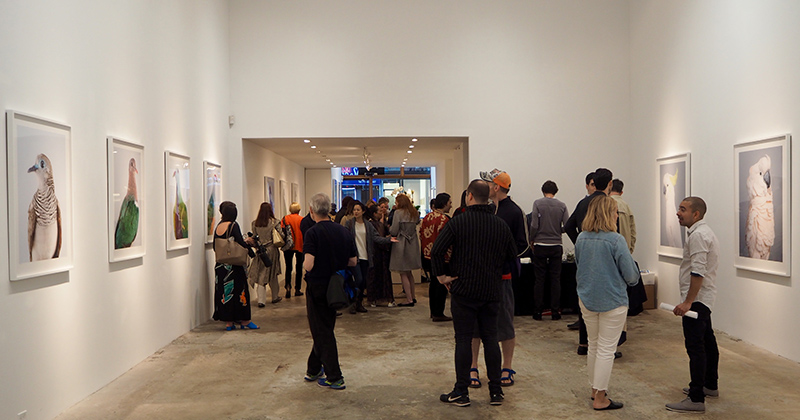 In 1993 he opened his first gallery in Paddington and the first exhibition featured Bill Rose, an older artist who was a friend of Tim’s father. Bill hadn’t exhibited for a long time due to his mistrust of art dealers, but felt very comfortable in Tim’s presence and under his guidance he was reintroduced to the art scene and the exhibition was a sell out. Tim’s brilliant career as a dealer was about to be unleashed onto an unsuspecting art world.

From his first exhibition he never took a backward step and along the way encountered many obstacles in which he eloquently and gallantly overcame to be one of the most revered and successful art identities, entrepreneurs and philanthropists in Australia today. 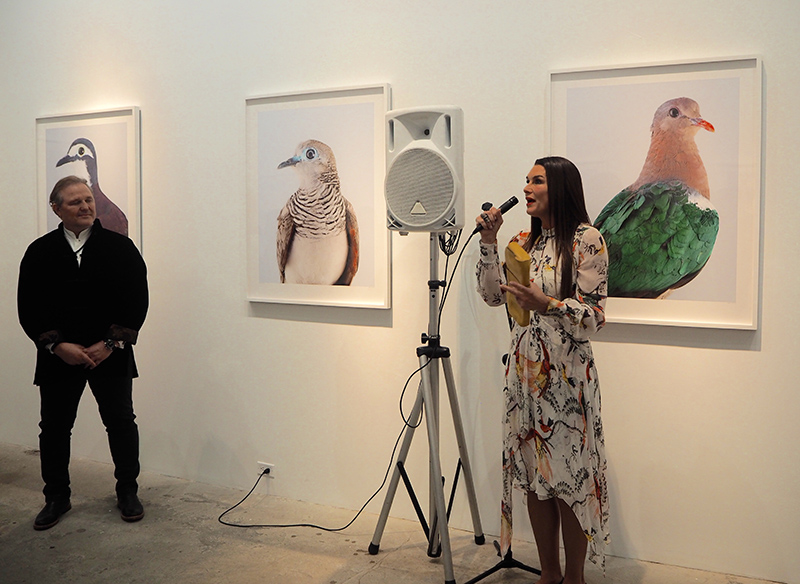 Emerald Gruin’s path was somewhat different. She was born in Sydney to a ceramicist mother and grew up in an art studio and studied in Sydney gaining her Bachelor of Arts at Sydney University and a Bachelor of Fine Arts with honors at Sydney’s National Art School.

Leaving Australia to pursue a modeling career in Hong Kong, London and Paris before settling in New York, Emarald enjoyed much success but grew tired of the industry and spent much of her spare time indulging her artistic passion in the great galleries and museums of the world.

Emerald ended up working for five years as a gallery director and independent art curator in New York before opening her first gallery in the Lower East Side with her husband Adrian Gruin, who also has a long family history in the art and music world. Adrian is also the business director of the Olsen Gruin gallery. 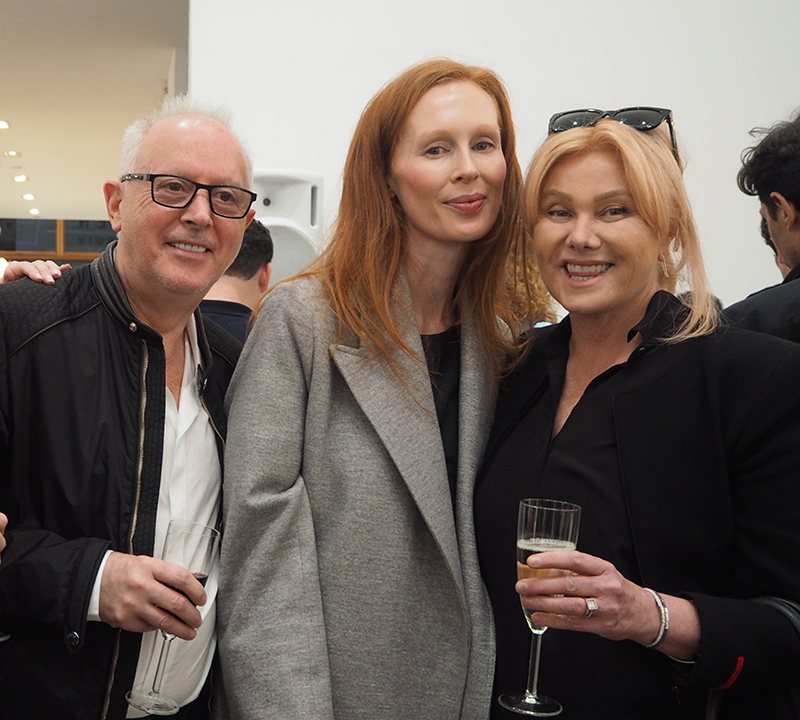 Even though Emerald and Tim both come from artistic influenced families, their own careers have ascended through perseverance and love of outstanding and contemporary art. Tim was always looking to launch a gallery in New York and he needed a partner who had prior Manhattan experience and that person was the extremely talented, stylish and qualified art curator Emerald Gruin.

The Olsen Gruin gallery was introduced to an unknowing New York art scene via Tim’s sister Louise Olsen, owner and designer of the iconic Australian ‘Dinosaur Design’ jewelry dynasty. Louise was in the process of opening a new store in Manhattan and at the time her previous store was going to be vacant for six months, so she offered the space in Elizabeth Street in the Lower East Side to Tim and Emerald to hold some exhibitions. 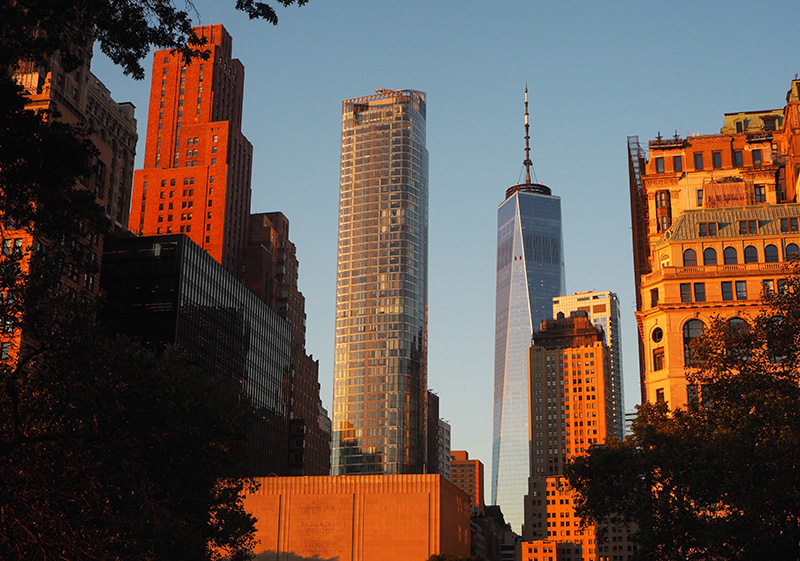 Their first Olsen Gruin alliance in the ‘Big Apple’ was in March 2017 and was a resounding success. The exhibition named ‘ON ELIZABETH’ featured the multinational artists Koak, Leo Gabin, Folkert, De Jong and Mike Bouchet. The exhibition was an overwhelming success and a further four more exhibitions were held in this Elizabeth Street gallery.

The following exhibitions were also successful and they realized they needed some serious space, so a new and larger gallery (three times the size) was sourced and found in one of the most flourishing art enclaves in New York – 30 Orchard Street, Lower East Side, Manhattan. 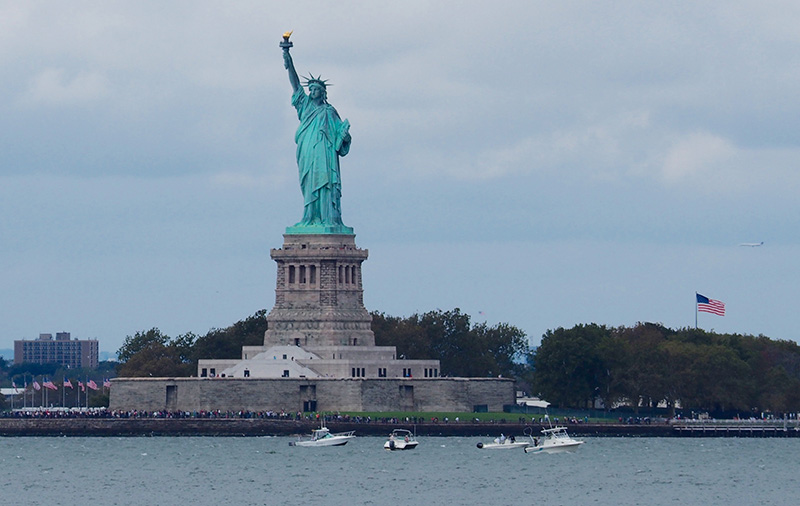 Galleries are mushrooming phenomenally in the Lower East Side along with bars, restaurants and retro fashion stores ensuring this bohemian area is one of the hippest, coolest and burgeoning growth areas.

So after some good old Aussie negotiating, their new premises aptly named the OLSEN GRUIN Gallery opened in June 2017 with an exhibition of abstract paintings by Aboriginal artists highlighted by a five metre Warlimpirrga Tjapaltjarri painting, which they relocated from the Elizabeth Street Gallery. Since that day there have been another three successful exhibitions prior to the recent official opening.

The Olsen Gruin isn’t an Australian only gallery, but if the art is worth showing, regardless of the artist’s nationality, it’ll be exhibited. 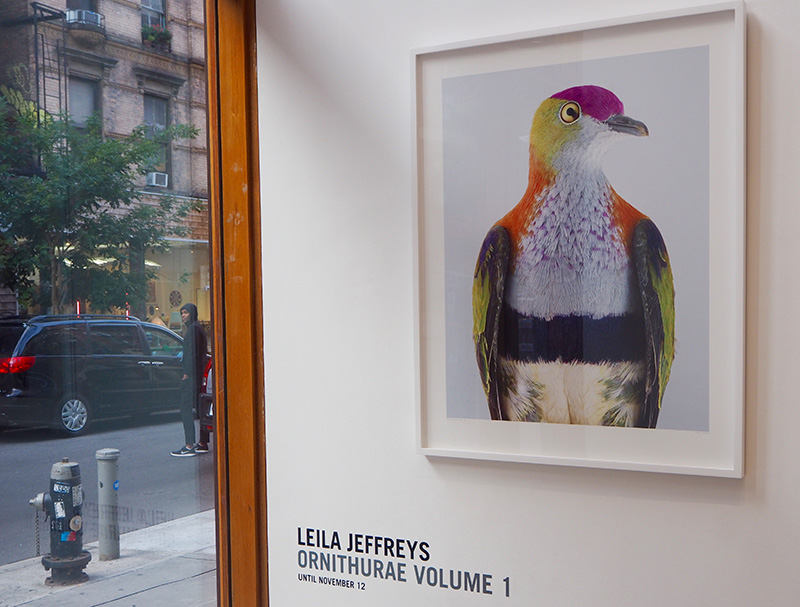 Years of hard work has seen Tim passionately acquire an outstanding reputation in the art world which has him put in a position where he doesn’t have to pursue the artists to exhibit in his galleries.

Tim now represents over 40 prominent artists throughout Australia and the world, and on a daily basis artists in the hope they will be able to display their works approach him.

The official opening of the Olsen Gruin gallery was on the 13th October 2017 and the artist who had the honour of representing the gallery for the opening was the legendary Aussie photographer and environmentalist Leila Jefferys. 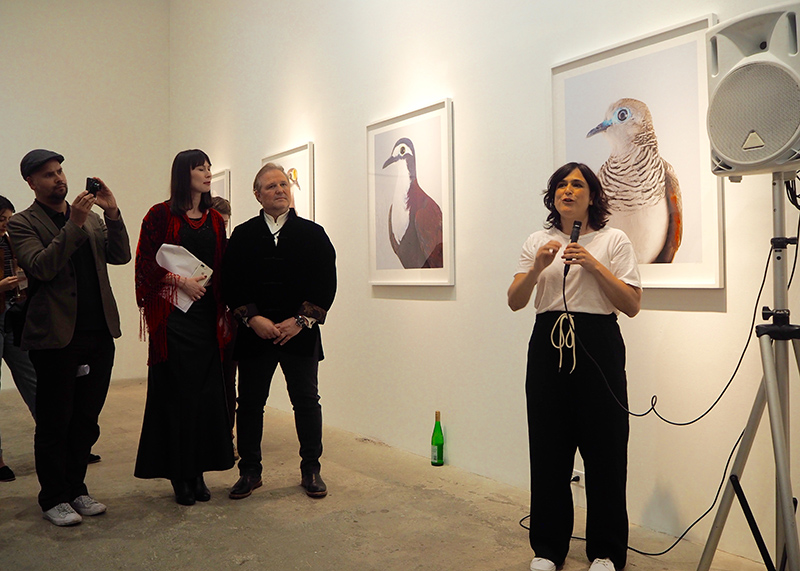 Jefferys was born in PNG and grew up in Perth and is renowned for her wildlife photography, in particular birds.

One of her biggest fans and collectors of her work is the actress Brooke Shields, who was on hand on the opening night to speak about Leila’s immense talent and her love of birds.

Leila has photographed native birds in Australia and the USA and recently was invited to shoot at the Ojai Raptor Centre, a sanctuary for wounded birds in California. 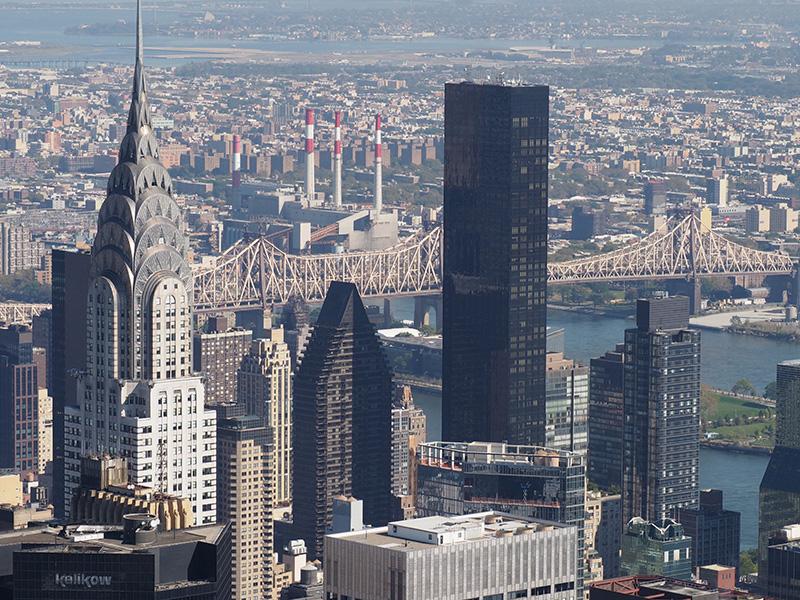 The opening night was a spectacular success. The gallery was filled with Leila enthusiasts, which included her family, local art aficionados and supporters from all over. There also were an unusual amount of hip instagram followers along with a mix of A list celebrities including Brooke Shields, Deborra-lee Furness and renowned music promoter Paul Dainty along with the New York Counsel-General Alastair Walton.

The Olsen Gruin Gallery in a short time has succeeded remarkably and the future looks dazzling with exciting and influential artists that are lined up to exhibit in the following months.

So if you’re planning a trip to Manhattan, be sure to add the Olsen Gruin Gallery to the very impressive list of galleries and museums that this pulsating, exciting and thriving city has to offer. •