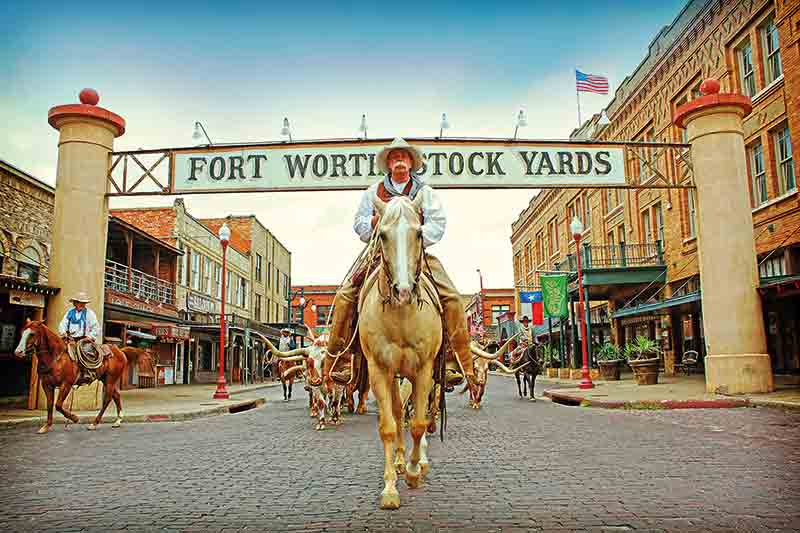 You can see it all happening from high above the city – the great big white steel arcs of the Margaret McDermott Bridge taking their place over the Trinity River, the apartment buildings rising fresh and strong from empty city blocks, the food trucks opening their hatches beside Klyde Warren Park, the planes coming in to land in their thousands each day at the Dallas Fort Worth International Airport out near Grapevine.

From my perch 140 metres above the ground in the Reunion Tower’s GeO-Deck, I watch from all angles as this city takes on a progressive, thoroughly modern shape. Though always well-regarded for its striking skyline and thumping economy, Dallas has bourgeoned in recent years; increasingly popular as the headquarters for American businesses, the consequent growth in population has necessitated the development of new infrastructure – and the gentrification of the old.

“Ten years ago this area was dead,” my Uber driver had said as we skirted Downtown and the Arts District, now vibrant neighbourhoods filled with an assortment of restaurants, bars, museums, galleries, opera and music venues and commercial properties repurposed as residential quarters.

From the GeO-Deck I can spy the Trinity River to the west, meandering lazily before forking off towards Fort Worth. For the past decade, work teams have been labouring away on the river’s banks, transforming it from a polluted stream to a clean, green corridor of walking trails, sports fields and recreational centres. 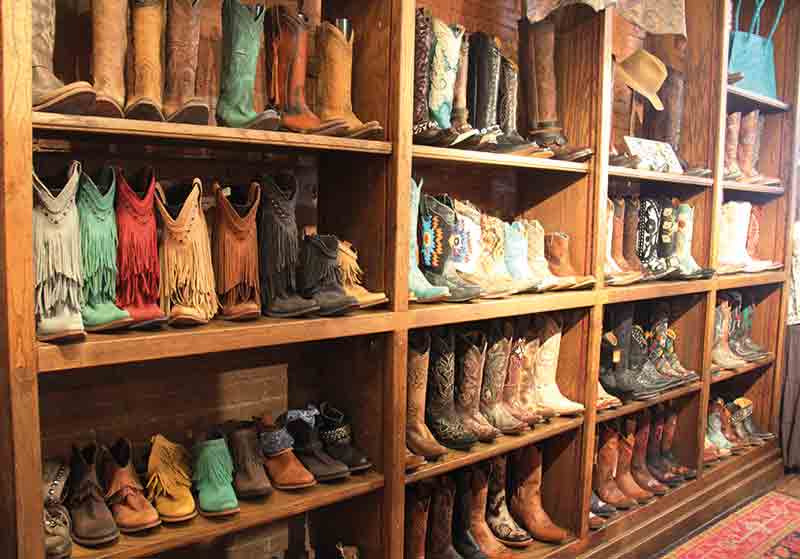 Turning back towards the city, I can see another example of Dallas’ renaissance in the industrial-styled Dallas Farmers’ Market. Once a horse-and-wagon wholesale business, it has morphed into The Market (open all week), a modern space filled with restaurants, cafes and artisanal shops; and The Shed (open Friday to Sunday) where local ranchers sell produce such as heirloom herbs and seeds, goat’s cheese, pasture-raised beef and rabbit.

It’s beautiful, fresh produce like this that’s being served up around the city in its proliferation of smart, casual – and just plain trendy – restaurants. You’ll never go hungry here: according to the Dallas Convention and Visitors Bureau, there are a staggering 12,000 eateries to choose from in the city.

One of those restaurants that’s taking its inspiration from local producers is The Mansion Restaurant, ensconced within the grounds of the historic Rosewood Mansion on Turtle Creek in the fashionable Uptown area. The city’s top chefs have passed through here, honing their skills in the procurement of regional produce and the cooking of Texas-style haute cuisine.

I’m a guest at the hotel, a palatial, genteel place that feels less like a hotel, but rather the home of a stylish, welcoming, discreet and well-heeled friend. The Mansion Restaurant is contained within the original wing of the estate – once the home of a Texas cotton magnate – and it’s here that I take brunch, an institution in Dallas, I’m told, especially on weekends. 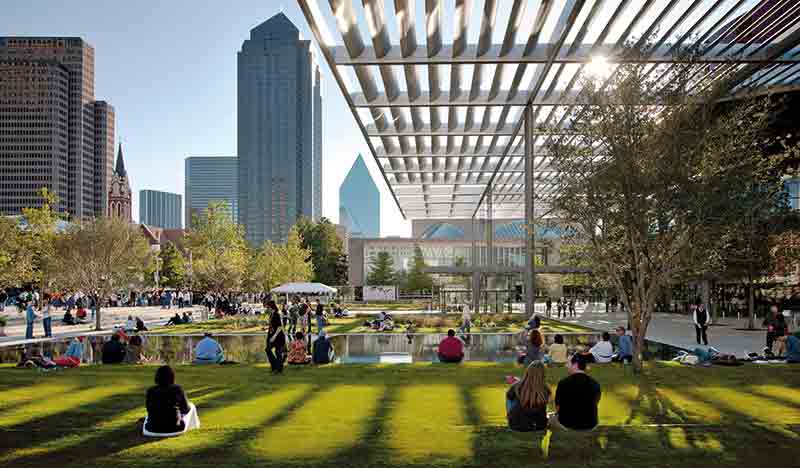 The meal is a happy, lip-smacking detour from the usual bacon-and-eggs, and reflects at once both Texas’ geographical location and the region’s access to fresh produce: green chilaquiles, a Mexican-style dish of confit chicken, sunny eggs, avocado, sour cream and a Mexican cheese called queso fresco. So satisfying is it, I dream about it for weeks to come.

A five-minute drive from The Mansion Restaurant, in Klyde Warren Park, is another standout eatery: Savor Gastropub, an establishment that fuses the old – classic cocktails, Southern hospitality – with new, American-style dishes (steak salad, wild-caught shrimp and grits) and sleek floor-to-ceiling glass windows that show off its central location to perfection.

The park itself is another remarkable innovation, a grassed deck suspended above a six-lane freeway that passes through Uptown, Downtown and the Arts District. But the city’s green sensibility is perhaps best actualised at the Dallas Arboretum and Botanical Garden, a glorious, 26-hectare parkland set on the shores of White Rock Lake, a 15-minute drive north-east
of the city.

If I’d looked carefully, I would have seen the Arboretum from my perch up on the GeO-Deck; but the grassroots close-up is far more satisfying: a lazy walk through this magnificently laid-out garden leads me through a series of secretive alcoves – a fern dell, a magnolia glade, the woman’s garden with its reflecting pool that shimmers on the same plane as the lake’s waters, and The Rory Meyers Children’s Adventure Garden, a three-hectare allotment filled with such delights as grass tunnels, native wetlands, a skywalk and even a waterfall. Spacious and breathable though the city centre is, it’s a joy to find this monument to nature flourishing so close by. 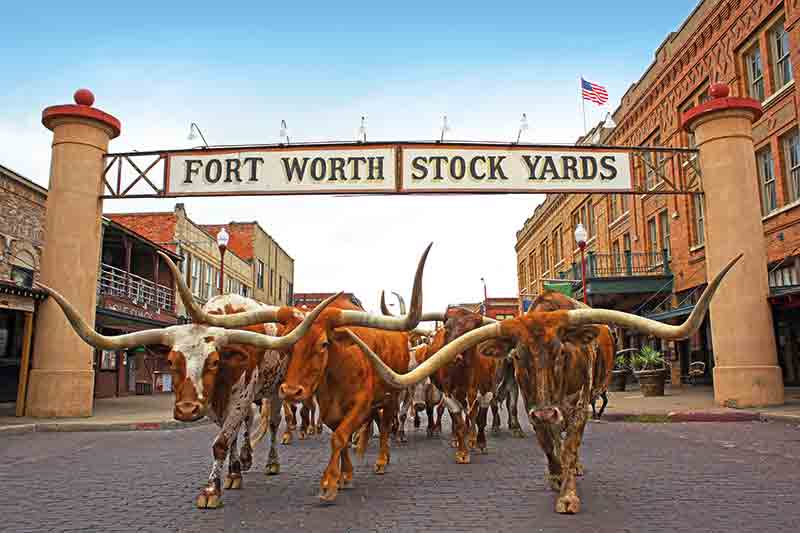 A 30-minute drive due west of Dallas is Fort Worth, the city that is the Bonnie to Dallas’ Clyde (both outlaws buried, incidentally, in Dallas), the horse to its wagon, the tequila to its lime. And indeed, the drinks are flowing fast and cold around the Fort Worth Stockyards, where visitors are allaying the summer heat with stubby beers and oversized take-away cups filled with frozen margaritas. They’re lining up along E. Exchange Street to watch one of Fort Worth’s twice-daily cattle drives, a cowboy-led charge of Texas bighorns clip-clopping down the cobblestones streets, their horns curling out at right angles from their heads like dangerous weapons.

The Stockyards District proves to be a convivial place to spend an afternoon. The streets are lined with bars and cafes; shoe sellers hawking cowboy boots in every colour – and visitors wearing them, too; stands draped with bright-dyed crocodile and ostrich and snake skins; vintage stores and Stetson purveyors and warrens stuffed with Texas-style arts and crafts and jewellery.

It’s thirsty work, shopping, so I order a sundowner – one of those mammoth margaritas, this one spiced with jalapeno – at Booger Red’s Saloon, a bar quirkily lined with horse saddle stools. The adjacent restaurant, H3 Ranch, serves some of the best steaks in the Fort Worth-Dallas area, I’m told, and so I order the smallest one on the menu, a nine-ounce (255 gram) bacon-wrapped, hickory wood-fired filet mignon served with crunchy ranch fries. The steak, it transpires, is smaller than the glass holding my margarita, a neat and juicy package that confirms the restaurant’s exceptional reputation. 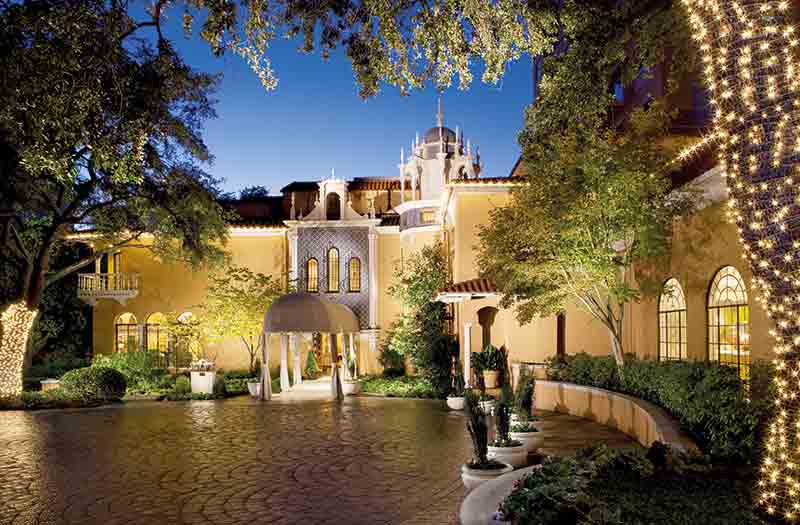 As the sun sets, visitors rise from their bar stools and restaurant tables and head to where the action’s at. Evening entertainment in this historic part of Fort Worth inevitably centres on the rodeo: a speed-of-light display of cowboy and cowgirl bravado, where calves are released from their pens and lassoed as quickly as possible. If not for the bewildered animals, this would be a perfect form of theatre: fit men and women demonstrating the skills that are important, of course, out on the ranches that have been so central to the development of this great big state.

But I’m far more comfortable down at Billy Bob’s Texas where, even before the rodeo is over, line dancers are stamping their feet, thrill-seekers are riding the mechanical bull, gamblers are laying down money, gamers are playing in the arcades, and country music lovers are settling in for the show.

This space feels bigger than Texas itself; it’s a cattle barn built in 1910 and since transformed into the biggest honky-tonk in the world; 6,000 revellers can be accommodated here at any one time. Willie Nelson and Dolly Parton have played here, of course; unexpectedly, so have Men at Work. 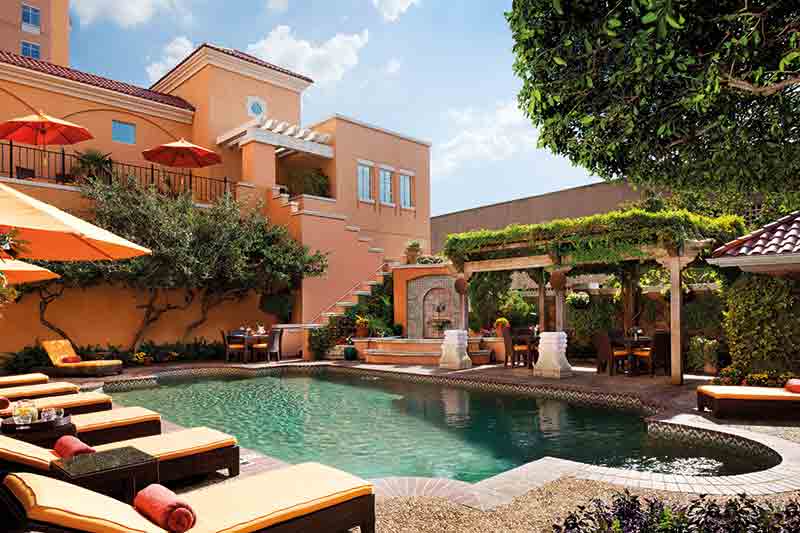 Tonight’s act is unknown to me, but he’s clearly a legend in Texas. Country star Sam Riggs performs his rousing, beautiful tunes well past midnight, vivifying the audience so that it morphs from a polite group of seated people to a screaming, swaying, baying morass.

It’s a short walk back to the Stockyards Hotel, where the receptionist greets me as though I’m a cowgirl just home from the range, and where the bed feels warm and soothing beneath me. There are earplugs on the bedside table – the cure for loud cowboys, the note beside them says. But the cowboys’ voices on the street down below feel familiar to me now. They weaken and fade and evaporate, and are nothing more than a memory come morning. •

Getting There
Qantas operates daily flights from Sydney to Dallas-Fort Worth; daily connecting flights operate to Sydney from all major Australian cities. 13-13-13; qantas.com

Getting Around
DART Rail, Trinity Railway Express (TRE) and bus services operate across Dallas. dart.org
TRE links Dallas to Downtown Fort Worth.
Uber is widely used in both cities. uber.com

When To Go
Summers in Dallas and Fort Worth are very hot, winters are mild; the best time to visit is spring or autumn.

Where To Stay
The Rosewood Mansion on Turtle Creek offers historic accommodations with modern comforts. +1-214/559-2100; rosewoodhotels.com
Fort Worth’s historic Stockyards Hotel transports guests back to the cowboy culture of the 19th century. +1-817/625-6427; stockyardshotel.com

Check out HotelsCombined for a comprehensive list of where To Stay in Texas as well as the exciting things to do and see.